I went in search of a spot that was exclusively mine, and I found one hidden beneath a Kashmir mountain.

Kashmir is a land of many folklores, and its mystical valleys are like songs of the bard that are now deeply entrenched in its conflict-ridden history. All you need to do is take one wrong turn off the beaten path to come face-to-face with its inexplicable tales. One such story is that of Kalaroos, an intricate system of hidden tunnels that are believed to lead to Russia.

I have always likened Kashmir to an onion. You can peel layers after layers and each time a new truth will reveal itself. Having been to the valley a dozen times, I was looking for something that strays away from the common tourist spots like Gulmarg, Pahalgam, and Srinagar.

When I came to Kashmir for the first time in 2017, it was still reeling from a six-month-long strict lockdown after the poster boy of militancy, Burhan Wani, was gunned down by the Indian forces. I was perhaps the lone outsider walking by the lake at the time. Fast forward to 2019 and Kashmir was so crowded that the walk along the lake in Srinagar meant the unavoidable photobombing of a tourist’s selfie. I had had enough. It was time to leave. So I went true north in search of a spot that was exclusively mine, and I found one hidden beneath a mountain.

Kalaroos is located in the Kupwara district of North Kashmir, at least a three to four hours drive from the capital. The word Qil-e-Roos loosely translates to “Russian Fort.” The caves are situated just beyond Satbaran, literally meaning “Seven Doors” which, according to local legend, transliterates to seven paths leading to Russia.

When I arrived in Kalaroos, I was completely unaware of its history. The legend was unknown to me; I was simply looking to break away from the crowds. But after talking to some people, I learned about the myth and was told that it is possible to explore these caves with a local villager, Gulzar Sahab, who knows the area like the back of his hands. Within minutes I had decided I would need to embark on this expedition the very next morning.

I arrived promptly the next day, charged with excitement and trepidation. I didn’t know what to expect from this adventure. The mountain looked tall and formidable. It was the holy month of Ramadan, so my companions would remain hungry for the rest of the day. The weather too seemed to be unfriendly this morning. But we were determined to tackle the mountain and find the caves hidden behind lore and shrubbery.

Gulzar Sahab looked upbeat. He was always so excited to take people in his backyard. For a man his age–he must have been over 50–he was in excellent shape. He was tall and lanky and moved with confidence on the gravity-defying slopes of the mountain. He knew his territory well, it was visible in his gait. I was standing there, still looking at the mountain in front of me when he directed me to start walking. It was an uneasy slope, within 100 steps I was gasping for breath as I watched Gulzar Sahab walk with ease. 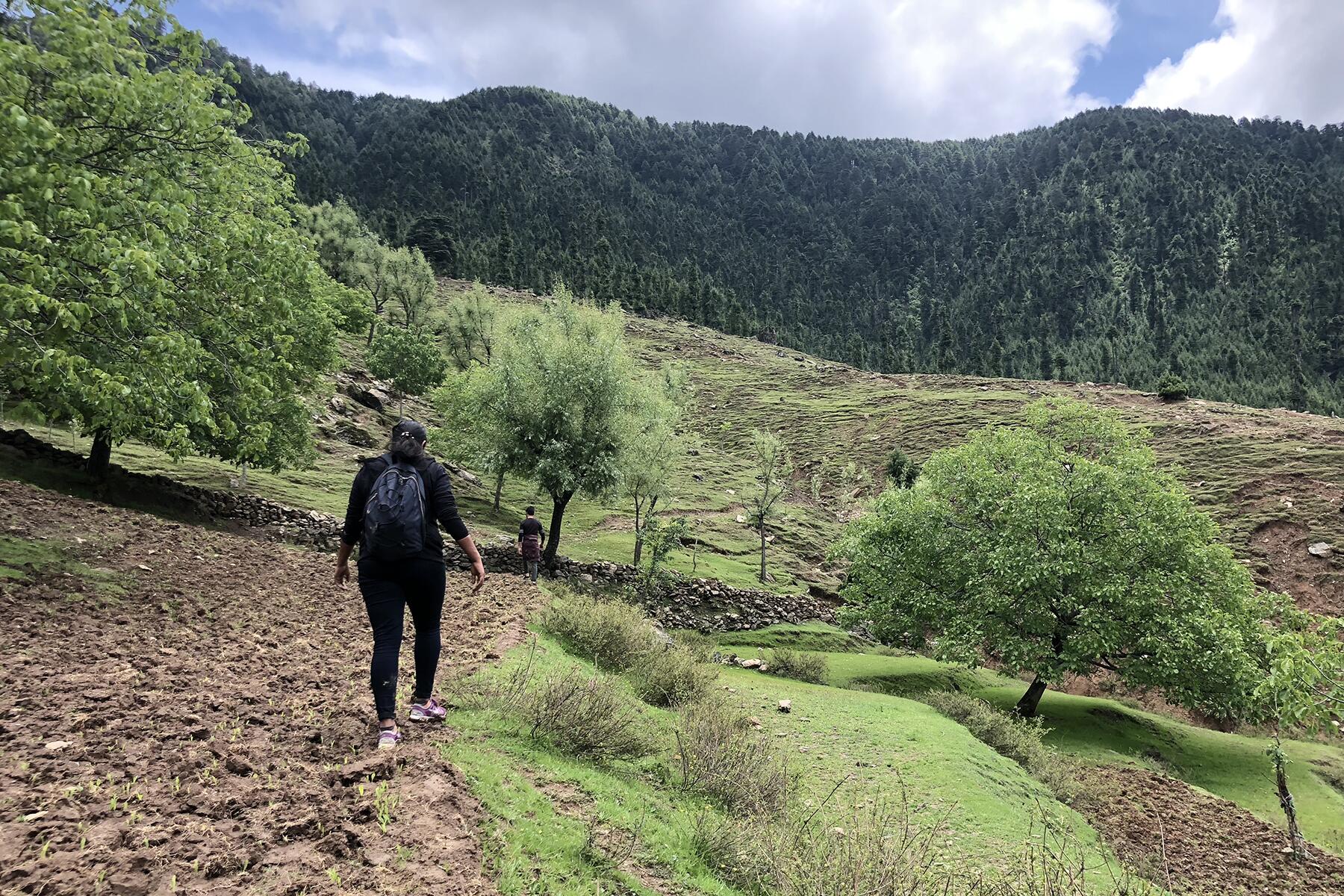 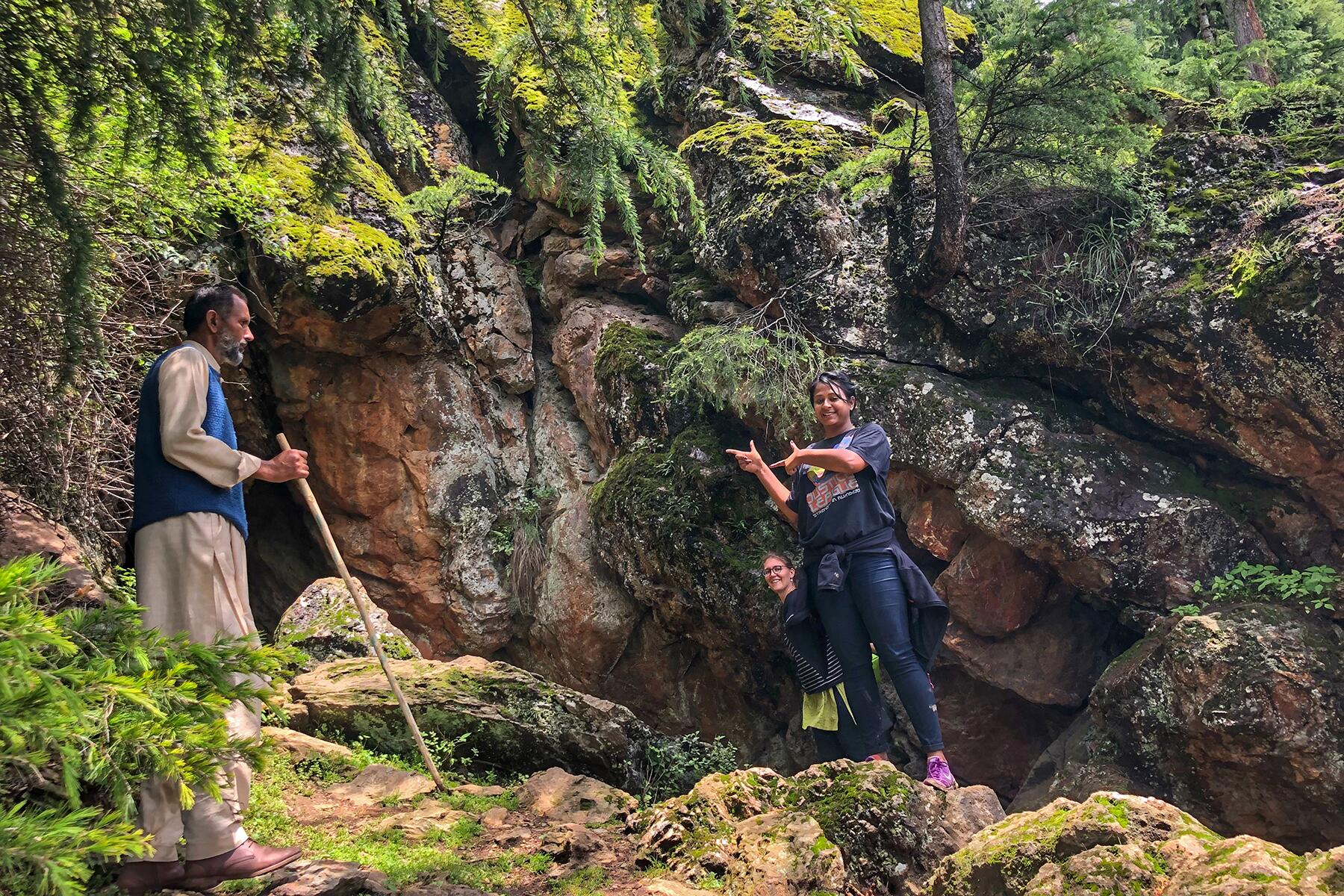 I pushed myself to follow his steps and stopped after every 100-200 meters. I started to feel like a failure within 30 minutes of starting the journey. I was slowing everyone down and overwhelmed with performance anxiety when Gulzar Sahab sensed my discomfort. He slowed down and held my hand like a father figure. He said, “I want you to see these mystical caves. Don’t worry, I am with you. Take as much time as you want, we have all day.”

His kindness gave me a renewed confidence to finish what we started. I followed his lead and started walking in his steps. Little did I know that the difficult part hadn’t even started yet. 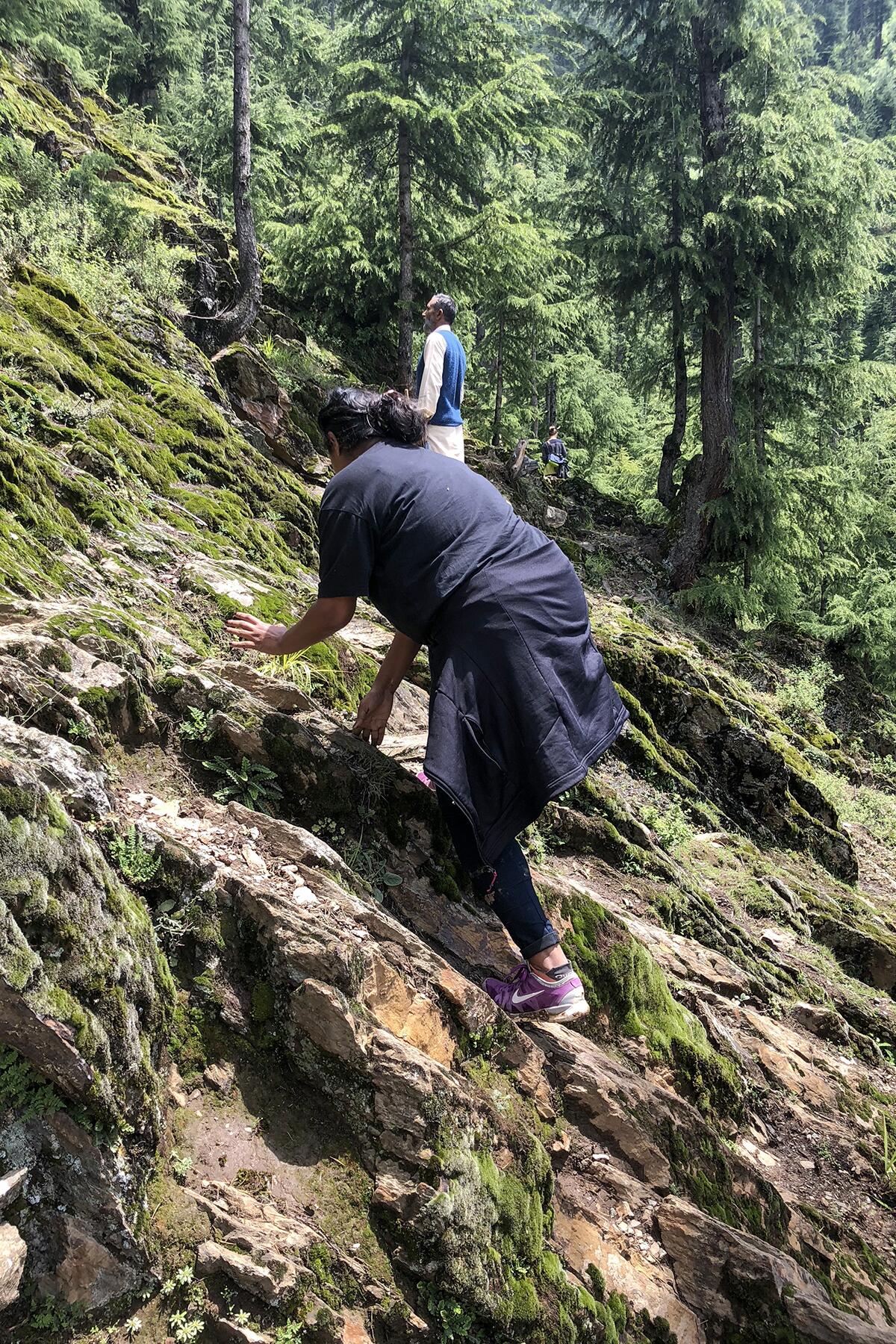 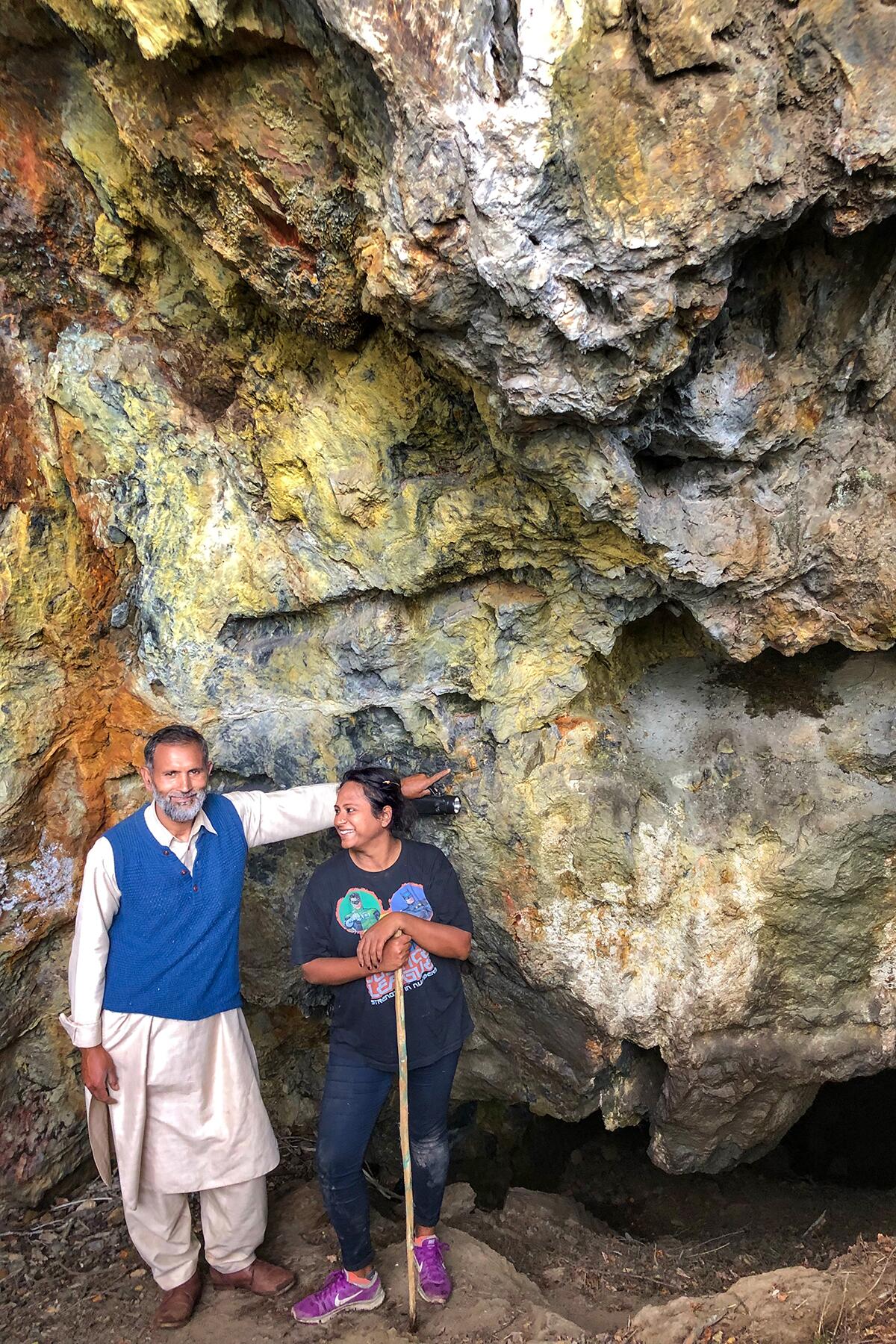 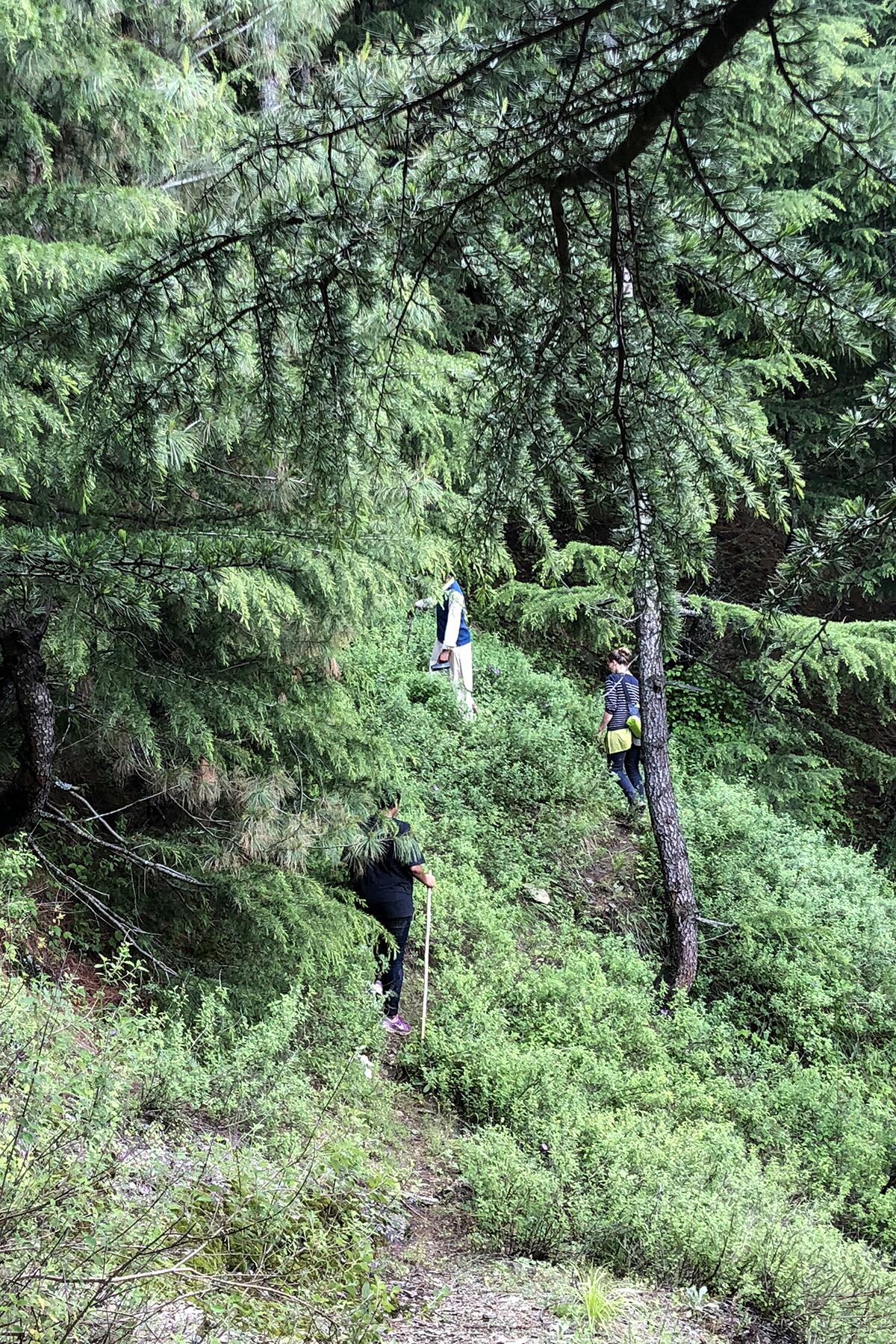 There was no trail on the mountain slope because no one goes there looking for the secret caves. As Gulzar Sahab explains, they are hidden for a reason. Just as I was struggling to find my footing on the slopey ground, it started raining. Fate wasn’t favoring me that day. If the path was difficult before, right now it became impossible. The slush was making it impossible to walk and the slopes became dangerous and slippery. But Gulzar Sahab was determined as he charged on, “We will go till the end.”

After trekking for an hour, we reached the first cave. It was a small opening just big enough for one person to squeeze themselves in through the entrance. I was so excited to see it, I forgot all my miseries. I stood at the opening and asked Gulzar Sahab if I can go inside. His vigorous yes was all I needed to jump inside. I landed on a platform adjoining a narrow passageway. As I went deeper into the cave, the air became damp and thick with a smell I couldn’t recognize. Gulzar Sahab was leading the way with his expertise. Soon he stopped to examine something on the floor. He quietly stood up and started backtracking. I could not understand what is happening and curiosity got the better of me when I blurted loudly, “What is happening?” He turned around and asked me to stay quiet, signaling me to start walking backward. 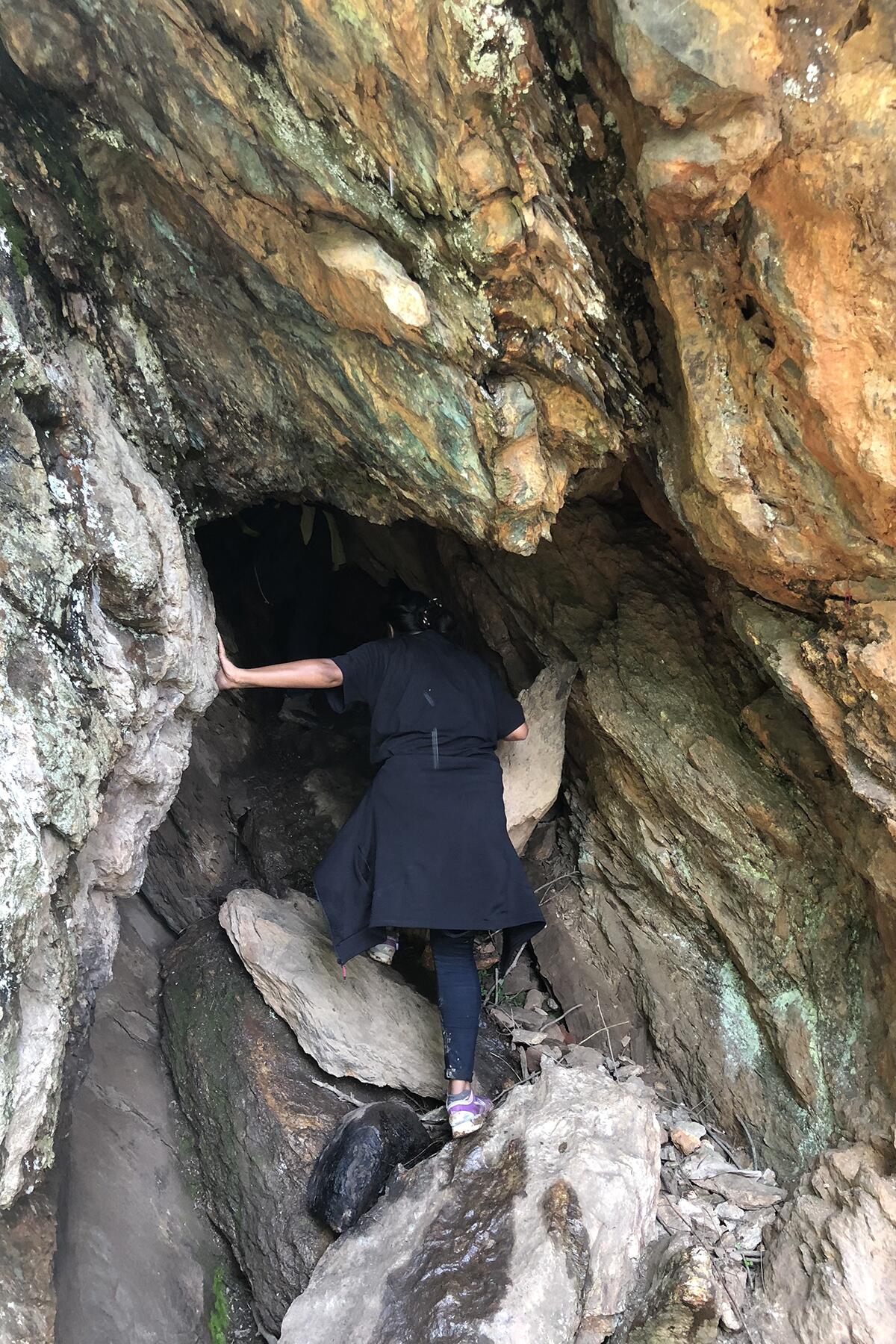 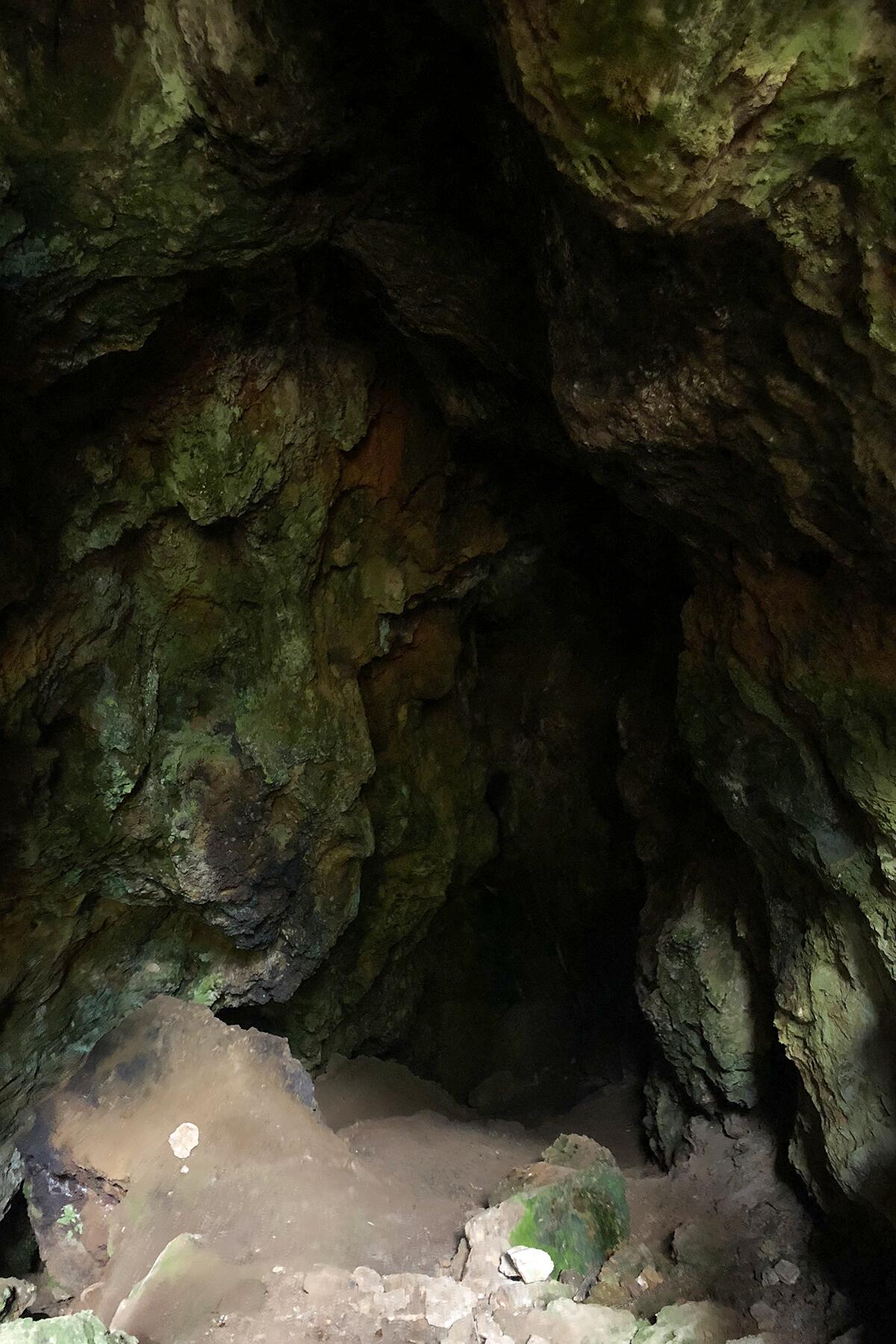 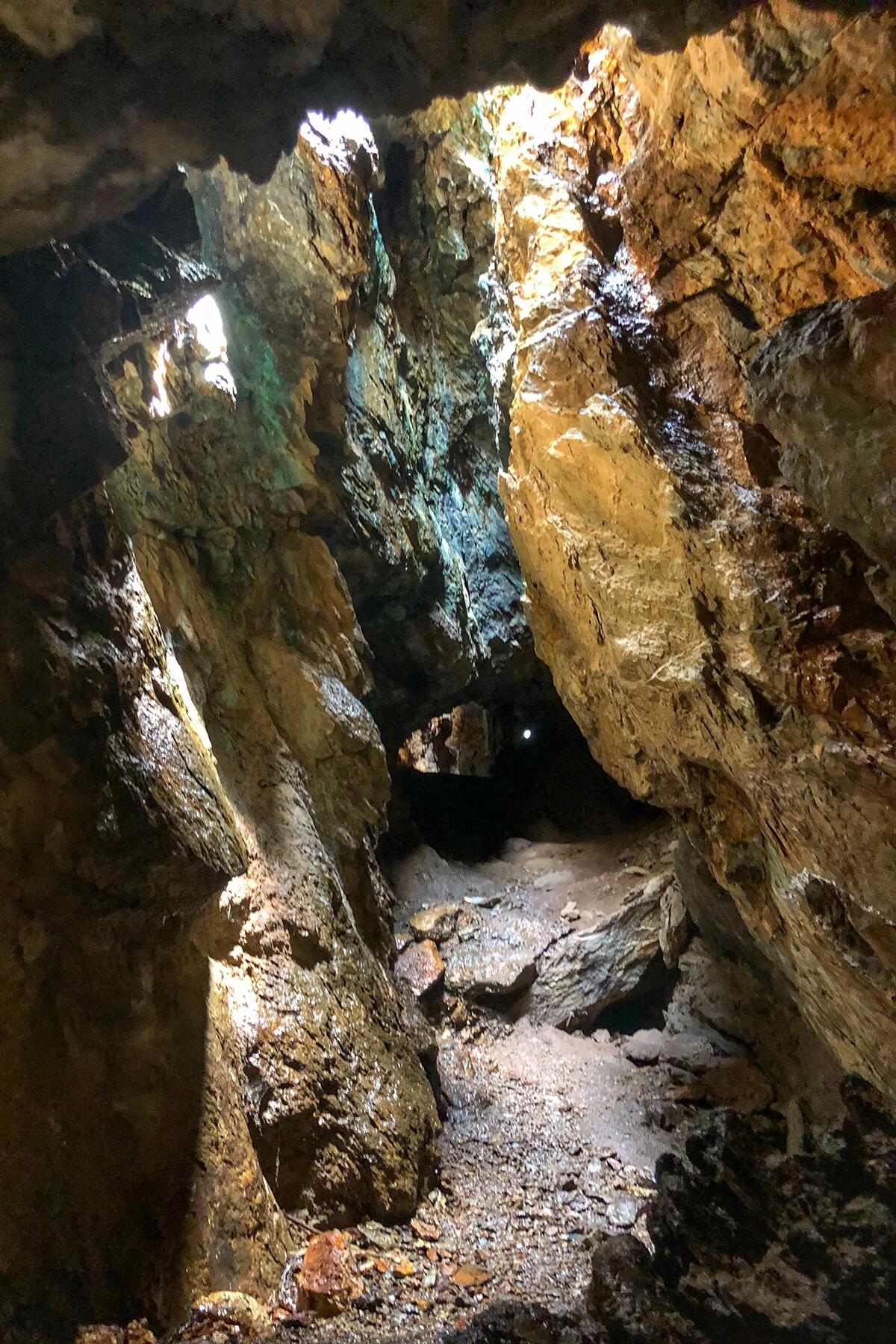 Ten minutes later we exited the cave I was able to ask him what had happened in there. He told me that he noticed a bear footprint that appeared fresh. He didn’t want to alarm the bear as they could attack us in self-defense. So he wanted us to leave before alerting the wildlife. This was cave number one and we had at least six more to go!

I stopped outside the first cave and took a deep breath to calm my nerves. The last thing I want was to be mauled by a bear in the middle of nowhere. After resting for about 15 minutes, we started walking on the pathless slopes to find cave number two.

It took us about 25 minutes to reach the second cave. It looked far less intimidating than the first one. The entrance was blocked by a large boulder and, frankly, I didn’t have the motivation to deal with the wildlife that may be lurking inside, so we started walking towards cave number three. 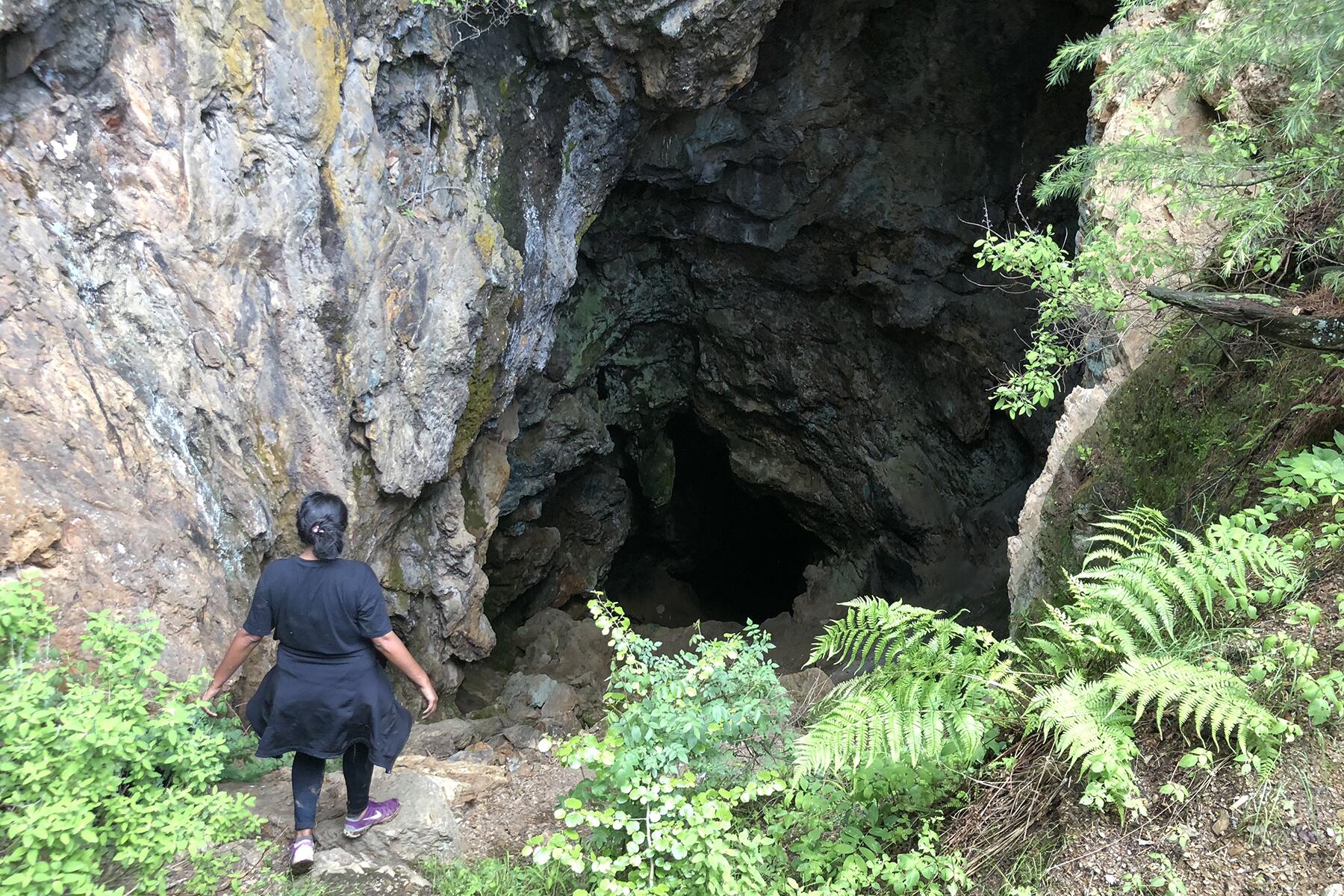 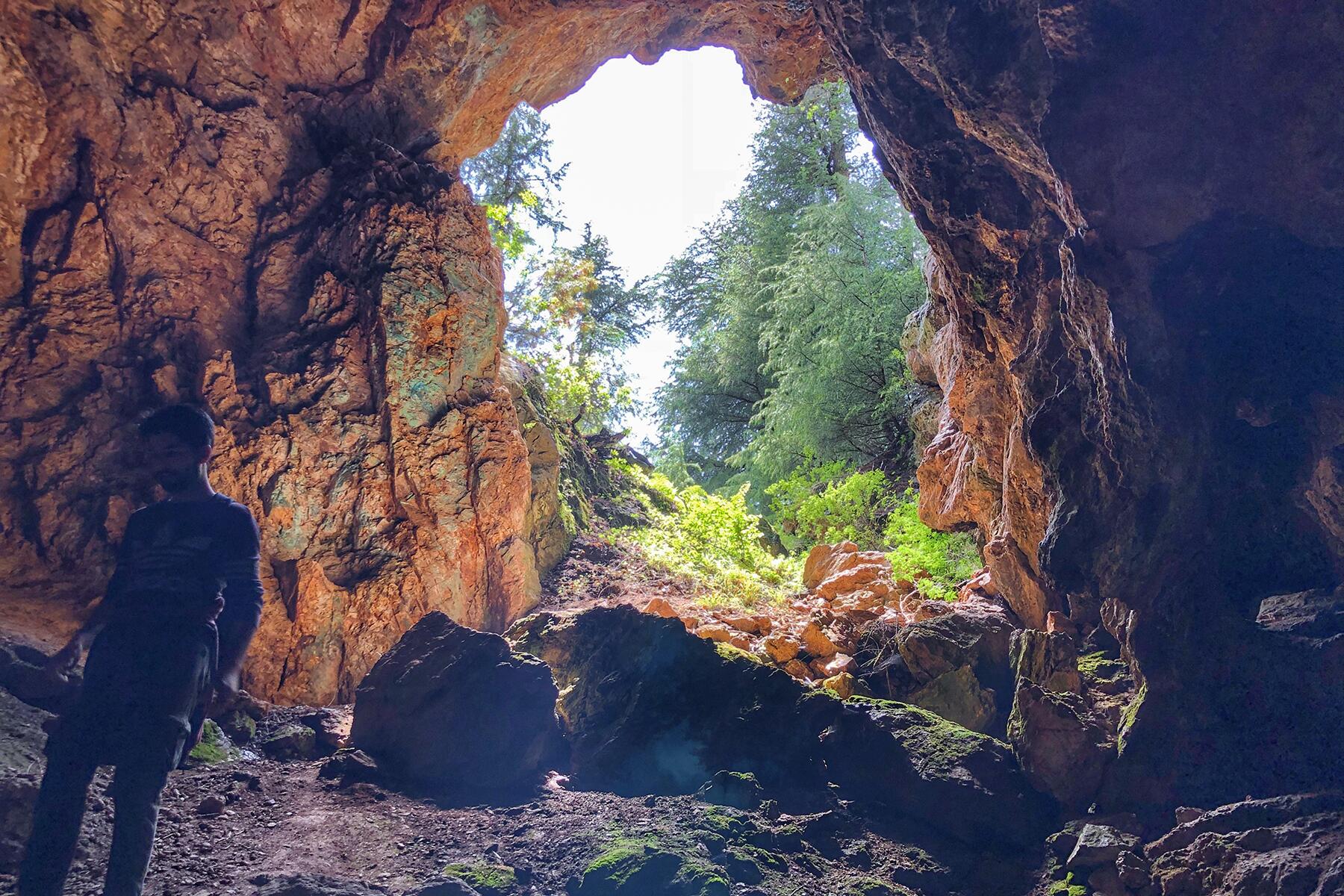 This one was by far the largest. It had a large opening that Gulzar Sahab tells me was due to an explosion by the Indian Army. Kalaroos is dangerously close to the Line of Control (LoC), a military border between India and Pakistan. It is also believed to be a crossing point for many insurgents into the neighboring territory. Locals say that the Indian Army blasted the cave entrance because they wanted to draw the militants believed to be hiding inside out. The cave opening loomed large in front of me and I naturally gravitated to its entrance. The other entrance leading inside the cave was much smaller and required us to get on all fours. At this point, my claustrophobia kicked in and I decided against going inside this one.

To keep my mind distracted from the arduous trek through slushy mud, Gulzar Sahab kept me entertained with anecdotes about these caves and their history.

By the end of this expedition, we had discovered at least five of seven caves. Each one was more mysterious than the last. There were many times along the path when I felt I couldn’t do it anymore and each time Gulzar Sahab would hold my hand and pull me through. Thanks to him, I was able to reach the top, very close to the LoC. It was exciting to be sitting this close to the international border, hidden behind a tree cover, trying to find truth in folklore.

I sat there catching my breath and taking in the surroundings. It was surreal. I could not have done even half of it if it weren’t for Gulzar Sahab, who had been determined to reveal this important piece of history and legend to me. 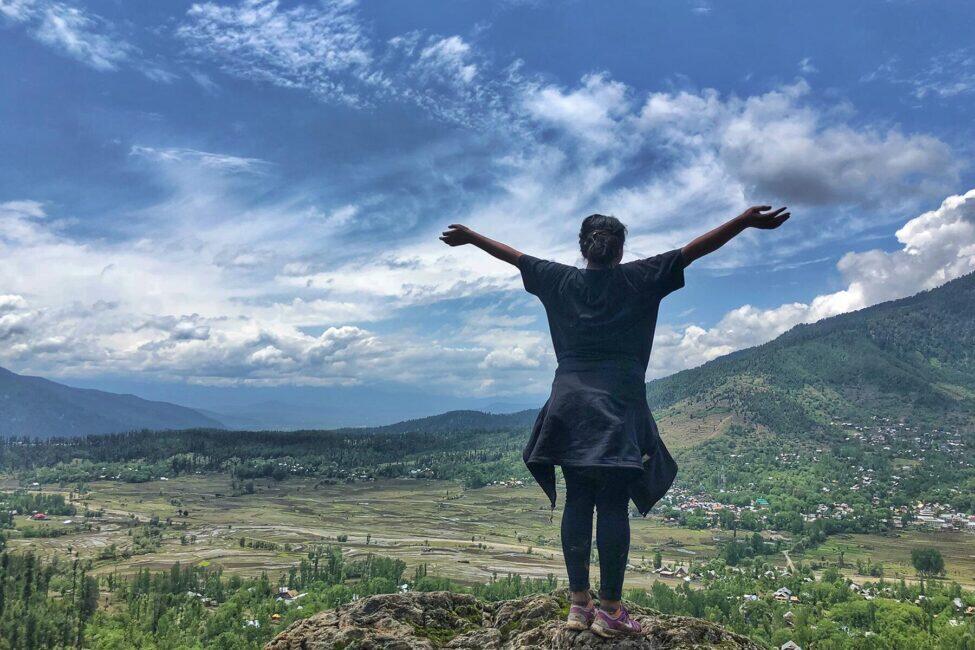 By this time it started raining heavily. The journey on the way down was much easier, as I spent most of it thinking about the day and how it transpired. We reached the foothill by 4 p.m. sliding through rain and mud, completely drenched in loose earth and enthusiasm.

As is with everyone in Kalaroos, Gulzar Sahab strongly believes that the caves are connected to one another and that they lead all the way to Russia. This claim, however, was disproved by American explorers, Amber and Eric Fies from Virginia, who say that all the caves terminated and don’t lead anywhere. Whatever the case may be, the people of Kalaroos firmly believe in the legend and share the tale with a tinge of pride.