Travel Tips Rebecca Toy We Asked a Sex Therapist How Couples Can Have the Best Hotel Sex
PHOTO: Yanya / Shutterstock

Have a delayed flight in Europe? Here’s everything you need to know about getting compensated.

Ever had your plans wrecked because of an extended flight delay?

That’s a rhetorical question, because who hasn’t? It’s a frustrating situation to be in that no amount of complimentary snacks can make up for. But if you’re lucky enough to be stranded at an airport in the European Union or are set to fly into an EU country with an EU-based airline, then you might be eligible for compensation up to €600 (~$665) per person, thanks to Regulation (EC) No 261/2004. In some cases, that’s more than the price of the original flight ticket.

The EU 261 regulation was put in place to protect passengers’ rights by ensuring that airlines compensate for flight disruptions. This includes flights with all airlines–including non-EU ones–that depart from EU airports, and those with EU-based airlines flying into the EU.

To begin with, airlines have to ensure that you’re cared for while you wait by providing meals and/or refreshments (this holds true for delays of less than two hours as well), possible hotel accommodations with transport costs, and access to phone calls or faxes/emails.

Here’s how to find out if you’re eligible for more:

Cause of Delay or Cancellation

The airline must compensate passengers in case of overbooking, technical problems, and other factors deemed within its control. However, if “extraordinary circumstances” lead to cancellation or delay, you are not entitled to compensation. This includes security risks, political unrest, poor weather conditions, and bird strikes, which is when a bird collides with an aircraft. (It happens more often than you’d think, although it’s rarely dangerous for passengers).

Once you’ve determined that the delay wasn’t caused by extraordinary circumstances, you need to compute the duration of delay, i.e. how much later your flight arrived at your destination when compared to scheduled arrival time (regardless of when it departed). 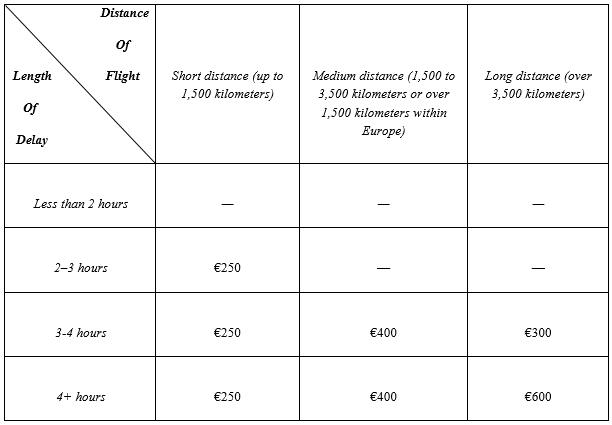 If the airline manages to get you on an alternative flight that reaches your destination no later than two, three, or four hours after the original arrival time for short-, medium-, and long-haul flights respectively, then your compensation is reduced by 50 percent. But once delays exceed five hours, you no longer have to take the flight and are eligible for a full refund.

When your flight is outright canceled, you have the right to be rebooked on an alternative flight or to receive a full refund. If you’re informed of the cancellation less than two weeks before your scheduled flight and you accept an alternative flight, the same compensation rules apply.

Airlines tend to indulge in quite a bit of blame-shifting when it comes to codeshare situations. However, EU 261 expressly states that the obligation to compensate passengers “should rest with the operating air carrier who performs or intends to perform a flight, whether with owned aircraft, under dry or wet lease, or on any other basis”. When in doubt, emphasize this point in your claim letter to deter the operating airline from trying to evade responsibility.

More recently, an EU court ruled that if a non-EU connecting flight leaving from a non-EU airport is delayed, you can still claim compensation from the first carrier if it’s an EU-based airline since connecting flights are treated as being part of a single reservation. For instance, say you’re taking a flight from Frankfurt to Bangkok via Dubai. As long as the first leg is with an EU-based airline, like Lufthansa, then even in the case of a delay with the connecting flight from Dubai to Bangkok (which could be with Thai Airways) or any non-EU airline, you are eligible for compensation from Lufthansa.

Sometimes a delayed flight can mean more than just a late arrival. Did the delay cause you to miss the first night of your hotel booking or an event you were specifically traveling to attend? Did you have to purchase another bus ticket to your destination because you missed your original connection?

All of these are valid grounds for reimbursement. The important thing here is to keep all of your receipts. As long as it’s a reasonable expense, you can include it in your claim. So, if you miss your bus connection due to a flight delay, don’t book a taxi instead and expect the airline to foot the bill (unless, of course, it’s the only option available).

How Do I File a Claim? What Can I Do if My Claim is Ignored/Dismissed?

Filing a claim is a pretty straightforward process. All you have to do is email the airline; the email address is generally available under the Feedback/Claim section of most airline websites. You have between one to ten years to do this, depending on the country that your airline is registered in.

In your claim letter, make sure to include all details of your original flight and any alternative ones taken, copies of receipts for reimbursement, the total amount you are claiming, and a brief description of your case. Here’s a basic template you can use.

There are plenty of resources out there, such as AirHelp and Weclaim, that can help you file your claim should you choose that route, but most charge commission (generally around 25% of compensation received). If you’d prefer to keep your money, there are other resources you can turn to. The EU has put out a list of national enforcement bodies created to further safeguard passenger rights. Reach out to them if you don’t hear from the airline or if your valid claim has been dismissed.

Other things to keep in mind: airlines are obligated to inform you about your rights and keep you updated about the status of your flight. A little awareness can go a long way—in this case, it can help make unpleasant flight disruptions just a tad easier to deal with. So perhaps the next time you find yourself stuck at an airport, it could mean a chance to rest or catch up on work while even making a little money in the process.