How to Survive Winter Travel Delays 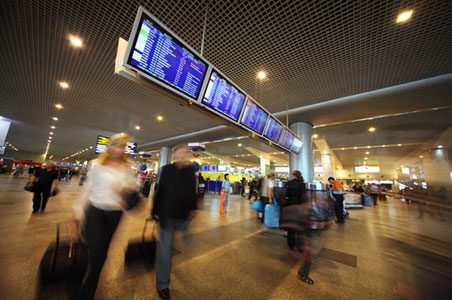 When everything goes according to plan, flying is an incredibly quick and convenient way to travel. Alas, things don’t always work so well. The recent storms in and around New York City demonstrated just how much airlines can alter their operations in case of weather events, with more than 20,000 flights canceled over the course of a week. As a traveler it is important to know both how to respond when plans go awry and also how to mitigate the chances of getting stuck in the first place.

Bigger planes are more likely to fly—When the airlines have to cut flights to account for weather delays it will be the smaller planes on shorter flights which are cut first. If you have a choice, take the bigger plane.

Early flights are on-time more often—Delays build throughout the day. Crews running just an hour late may ultimately not be able to operate their last scheduled flight of the day because of regulations regarding the number hours they can work. Flying earlier in the morning usually can help avoid those problems, though it often means an unfortunately early wake-up call.

Some airports are more on-time than others—More runways means more likelihood of on-time operations. In the New York City area, for example, JFK is more likely to be close to on-time than LaGuardia or Newark, not that any of the three have great on-time ratings overall. And if you are forced to take a connection look at the chances of weather impacting the connecting airport. Flying through Chicago in the winter is more likely to see a snow storm impact your flight than connecting in Dallas or Houston.

Can partners help you get where you’re going?—Planes are more full than ever these days meaning once a flight is canceled getting a seat on the next one will be incredibly difficult. Some airlines are more willing than others to work with other carriers to help get passengers to their final destination. Here’s a quick look at some of their policies: Virgin America, Spirit, and Southwest will almost never involve other airlines. JetBlue will occasionally work with American Airlines. The legacy carriers are most easily able to get other airlines involved. This doesn’t mean that they will—especially not if weather is the cause of the delay—but that’s the best chance customers generally have.

Consider the Club—Getting an airline club membership is often an expensive proposition. But when operations go pear-shaped having easier access to agents at the airport might make the difference between getting on the go and being stuck in the terminal. A number of credit cards include access to lounges in some form or another and, failing that, most US airlines will sell a one-time access option for around $50. Just getting out of the mass of people in the terminal might make that worthwhile.

Keep calm and fly on—When it comes to dealing with the agents responsible for handling the problems, yelling isn’t going to be useful to anyone. The agents get to decide whether they go the extra mile for you or not. Yelling at them will, in general, ensure that they do not. Remaining calm and level-headed is much more likely to result in getting back on the go more quickly. Plus it is the right thing to do.

Got a travel agent?—If you book a flight directly through an airline then you have to deal with that airline for any issues which arise. If you book through a travel agent, including online agents like Expedia, Orbitz, or Travelocity, those companies should act on your behalf to help solve issues. If you’re stuck at the airport consider having one member of your party call the airline and another call the travel agent. One might be able to get better results or get through to an agent more quickly than the other. No guarantees, but having two options may work in your favor versus just one. And traditional travel agents, the ones you pay to help you rather than just a website, are even better at fixing problems; it might be worth the small investment if you’re headed on a big trip.