At Disney, your little princesses can eat, sleep, and dress up just as princesses should. They can also hobnob with Cinderella, Belle, and other Disney royals. Here’s how. 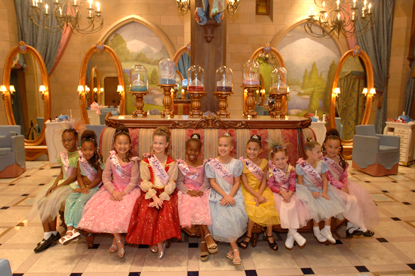 Want your own fairy godmother? Look no farther than the Bibbidi Bobbidi Boutiques in Downtown Disney and the Magic Kingdom. These royal beauty salons transform girls ages 3 and up into princesses in 60 minutes flat. The Coach Package ($49.95) includes hair styling and makeup; the Crown Package ($54.95) adds a manicure; and the Castle Package ($189.95+) is complete with a dress, accessories, and photographs. Reserve through 407/WDW–STYLE (407/939–7895).

Good to Know: Disney Cruise Line’s newest ship, the Fantasy, sails in early 2012 with an onboard Bibbidi Bobbidi Boutique.

At character meals, princesses come to your table for autographs and pictures. The most popular are the meals of Cinderella’s Royal Table inside the Magic Kingdom’s Cinderella Castle. The breakfasts, in particular, fill up so fast that you must book them as soon as possible before your vacation (which means exactly 180 days out). Akershus Royal Banquet Hall in the Norway Pavilion at Epcot has the easier-to-book Princess Storybook Dining, often with rarely seen royals like Ariel. Cinderella’s Happily Ever After Dinner, at 1900 Park Fare in the Grand Floridian Resort, features Cinderella, her hilarious stepsisters, and her evil stepmother. Reserve any of these princess meals ($36–$59.99) through 407/WDW–DINE (407/939–3463).

Good to Know: When the Be Our Guest restaurant opens in Fantasyland in 2012, evening meals will include the cast from Beauty and the Beast. 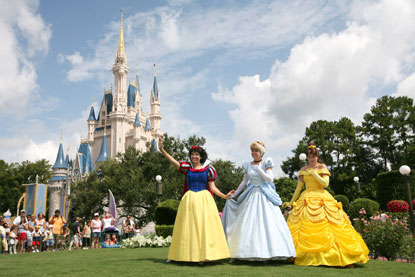 Meet Princesses in the Parks

The traditional princesses are all in the Magic Kingdom, and the queues to meet Cinderella, Belle, and Sleeping Beauty now have their own FastPass. For a more exotic photo op and shorter lines, head to Epcot, where you might see Jasmine in Morocco, Mulan in Japan, or Alice in Wonderland in Great Britain. And you’ll find Pocahontas only in the Animal Kingdom. Pick a couple of characters to see ahead of time, and stop by City Hall in the Magic Kingdom or Guest Relations in Epcot or Animal Kingdom for appearance info. Otherwise you could spend hours on a princess hunt.

Good to Know: When the revamped Fantasyland opens in 2012, there will be more princess-appearance locations—complete with interactive experiences in the queues.

Also Good to Know: It’s not unusual for kids to be a little overwhelmed when they finally come face-to-face with Cinderella or Belle. After all, these are movie stars! It’s a good idea to hang back and let the characters, who’ve been trained to deal with shy children, approach you. 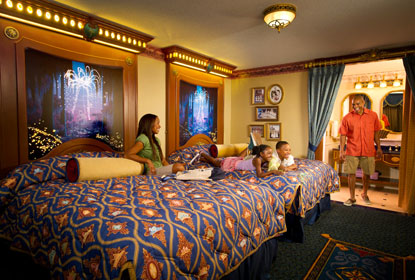 Tiana from The Princess and the Frog has invited her friends to help decorate rooms for royalty like you at Disney’s Port Orleans Resort—Riverside. Soon there will be 500 Royal Guest Rooms with familiar items from Disney films like the footstool from Beauty and the Beast or the flying carpet from Aladdin. And your little princess can set off fiber-optic fireworks across her bed’s headboard.

Good to Know: The Royal Guest Rooms will be completed in February 2012, but you can book now. Expect to pay $150–$300 a night, depending on the season.