News Apeksha Bhateja What Are the Chances You'll Get Monkeypox at a Hotel?
NewsTop 10 Civil War Sites: From the Battlefields to Appomattox

Top 10 Civil War Sites: From the Battlefields to Appomattox

This month marks the 145th anniversary of Robert E. Lee’s surrender to Ulysses S. Grant at the Appomattox Courthouse. You don’t have to be a history buff, though, to appreciate the significance of these seminal venues. In ways large and small, they helped determine the course of U.S. history. 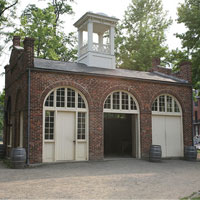 At the stunning convergence of the Potomac and Shenandoah rivers, Harper’s Ferry played a key role in the events leading to the Civil War. Last year marked the 150th anniversary of the raid led by John Brown, a radical abolitionist, to take control of the town and commandeer weapons from the arsenal for the fight against slavery. Brown was later tried and hanged, but historians cite the incident as the spark that ignited the conflict between North and South.

The town, at the crossroads of Maryland, Virginia, and West Virginia, has been restored to its appearance during Brown’s time, and exhibits highlight early American life and Civil War history. Along the cobblestone streets you’ll find costumed interpreters in 19th-century homes and storefronts demonstrating period activities such as candle-dipping and candy-making. Lectures and special tours are offered on weekends. Several hikes meander through the shady mountains that surround the park, passing over stone bridges and past the remains of homes and churches. Leave your car at the Cavalier Heights Visitor Center and take one of the free shuttle buses that depart every 15 minutes. www.nps.gov/hafe.

The first shot of the Civil War was fired at Fort Sumter on April 12, 1861. After a 34-hour battle, Union forces surrendered the fort, which became a symbol of Southern resistance. The Confederacy held it, despite almost continual bombardment, from August 1863 to February 1865. When it was finally evacuated, the fort was a heap of rubble. Today the National Park Service oversees it.

The Fort Sumter Liberty Square Visitor Center, next to the South Carolina Aquarium, contains exhibits on the Civil War. This is a departure point for ferries headed to the island where you find Fort Sumter itself. There are six crossings daily between mid-March and mid-August. The schedule is abbreviated the rest of the year, so call ahead for details. Rangers conduct free guided tours of the fort once you arrive; the fee for the ferry as $15. www.nps.gov/fosu.

The Confederacy won two important victories—in July 1861 and August 1862—at Manassas National Battlefield Park, or Bull Run. General Thomas Jonathan Jackson earned his nickname Stonewall here, when he and his brigade “stood like a stone wall.” When the second battle ended, the Confederacy was at the zenith of its power. Originally farmland, the battlefield bore witness to casualties of nearly 30,000 troops.

The Stone House, used as an aid station during the war, still stands. President Taft led a peaceful reunion of thousands of veterans here in 1911—50 years after the first battle. The “Peace Jubilee” continues to be celebrated at the Manassas courthouse every summer. A self-guided walking or driving tour of the park begins at the visitor center, whose exhibits and audiovisual presentations greatly enhance a visit. www.nps.gov/mana.

Site of one of the Civil War’s grimmest and most pivotal battles, Shiloh National Military Park is the resting place of almost 4,000 soldiers, many unidentified, in the national cemetery. A self-guided auto tour (about 2½ hours) leads you past markers explaining monuments and battle sites. The visitor center runs a 25-minute film explaining the battle’s strategy and has a display of Civil War artifacts. To get to Shiloh from Memphis, head east from Memphis on U.S. 64, then 10 mi south on TN 22. www.nps.gov/shil/. 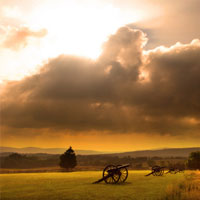 Time has returned Antietam National Battlefield, the site of the bloodiest one-day battle of the Civil War, to its tranquil antebellum appearance, with woodlands giving way to sloping cornfields bound by rough-hewn fences. On September 17, 1862, more than 23,000 Union and Confederate troops were killed or wounded here.

An hour-long documentary is shown at the visitor center at noon each day, and there is an exhibit of Civil War artifacts. You can also hike the battlefields with an audio tour or accompanied by a ranger. A recent addition is the Pry House Field Hospital Museum, an extension of Frederick’s National Museum of Civil War Medicine, where a re-creation of an operating room and implements used to care for the wounded are displayed. After the battle, President Abraham Lincoln visited the two-story brick house which served as Union General George B. McClellen’s headquarters during the battle. www.nps.gov/anti.

The 9,000-acre park called Fredericksburg/Spotsylvania National Military Park actually includes four battlefields and four historic buildings. At the Fredericksburg and Chancellorsville visitor centers you can learn about the area’s role in the Civil War by watching a 22-minute film ($2) and viewing displays of soldiers’ art and battlefield relics. In season, park rangers lead walking tours. The centers offer recorded tours ($4.95 rental, $7.50 purchase) and maps that show how to reach the battlefields, Chancellorsville (where General Stonewall Jackson was mistakenly shot by his own troops), and Spotsylvania Court House battlefields—all within 15 mi of Fredericksburg.

Just outside the Fredericksburg Battlefield Visitor Center is Sunken Road, where on December 13, 1862, the Confederates achieved a resounding victory over Union forces attacking across the Rappahannock (there were 18,000 casualties on both sides). Much of the stone wall that protected Lee’s infantrymen is now a re-creation, but 100 yards from the visitor center part of the original wall overlooks the statue www.nps.gov/frsp.

In 2008 the Gettysburg National Military Park Museum and Visitor Center moved to a $103 million facility, which makes for an excellent starting point to understand the events leading up to the battle, its significance to the Civil War, and its impact on the town. The center includes a dozen interactive galleries, which feature a compelling mix of artifacts such as a wooden desk believed to have been used by General Robert E. Lee, paired with the latest in interactive video and audio displays. Each section takes its name from a phrase used in Lincoln’s Gettysburg Address.

It is also home to the 377-foot “Battle of Gettysburg” cyclorama painting from 1884, which has been completely restored including a 3-D foreground. The painting, a must-see in its colorful, life-like depiction of Pickett’s Charge, along with a documentary film, “A New Birth of Freedom,” are packaged together as a 45-minute ticketed experience. There is a restaurant and a bookstore on site. The Park Service also provides a free map with an 18-mi driving tour through the battlefield, walking-tour guides, and schedules of free ranger-conducted programs which range from walks and talks about the battle to the aftermath and the Civil War experience. Private, licensed guides may also be hired at the center. www.gettysburgfoundation.org.

Inside what was once the Tredegar Iron Works, the Richmond National Battlefield Park Visitor Center is the best place to get maps and other materials on the Civil War battlefields and attractions in the Richmond area—and there are many, as this was the seat of the Confederacy. A self-guided tour and optional tape tour for purchase covers the two major military threats to Richmond—the Peninsula Campaign of 1862 and the Overland Campaign of 1864—as well as the impact on Richmond’s home front. Three floors of exhibits in the main building include unique artifacts on loan from other Civil War history institutions. Other original buildings on-site are a carpentry shop, gun foundry, office, and company store.

Built in 1837, the ironworks, along with smaller area iron foundries, made Richmond the center of iron manufacturing in the South. When the Civil War began in 1861, the ironworks geared up to make the artillery, ammunition, and other material that sustained the Confederate war machine. Its rolling mills provided the armor plating for warships, including the ironclad CSS Virginia. The works—saved from burning in 1865—went on to play an important role in rebuilding the devastated South; it also produced munitions in both world wars. www.nps.gov/rich.

To walk Petersburg National Battlefield is to be where more than 60,000 Union and Confederate soldiers died during the siege of the city. A pronounced depression in the ground is the eroded remnant of the Crater, the result of a 4-ton gunpowder explosion set off by Union forces in one failed attack.

The 1,500-acre park is laced with several miles of earthworks and includes two forts. In the visitor center, maps and models convey background information vital to the self-guided driving tour, during which you park at specified spots on the tour road and proceed on foot to nearby points of interest. www.nps.gov/pete.

To many in Virginia, the Civil War has never ended, but the history books say it ended here, 25 mi east of Lynchburg, on April 9, 1865, when Confederate General Lee surrendered the Army of Northern Virginia to General Grant, leader of pursuing Union forces.

There are 27 structures in the national historical park, restored to its 1865 appearance; most can be entered. A highlight is the reconstructed McLean House, in whose parlor the articles of surrender were signed. www.nps.gov/apco.