News Tina Antwi 'Regenerative Travel' Is the New Buzz Phrase, but What Does It Mean?
Home  >  News   >   The World’s Best Luxury Tour Specialists (and Their Top Trips)

The World’s Best Luxury Tour Specialists (and Their Top Trips)

Booking a guided trip has big benefits: from accessing otherwise off-limits locations (e.g. the Galapagos) to having someone do all the dirty work so you can just have fun. Thousands of tour companies exist, but the following top-rated operators consistently earn gold medals in everything from VIP services and customizability to use of local guides and hotels. They’re also known for their adventurous, expert-led itineraries that ring of bucket-list glory. These are not your average package tours, but bona fide, once-in-a-lifetime voyages of discovery. And yes, while you’ll typically pay top dollar for them, we’ve rooted out a few sweet deals for you, too. 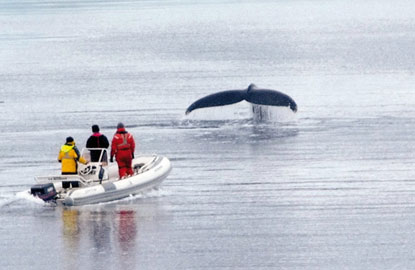 Why They’re the Best: Starting solely as a safari operator in 1962, today, veteran outfitter Abercrombie & Kent‘s tailor-made holidays touch all seven continents, making them the go-to for discerning travelers. Dogsled in Norway and soar over the Indian Ocean in a WWII fighter jet with the company’s Extreme Adventures branch – which is offering new 2012 treks to Mount Kilimanjaro (from $3,995) and Everest Base Camp (from $3,990). A&K’s new VIP Airport Concierge (launched in 2011) is now available at 350-plus airports around the world – making layovers a breeze by netting clients perks like limo transfers, lounge access (regardless of ticket class), private city tours, and a customs escort (full package from $284 or services available a la carte). Current can’t-miss offers include 50% off summer trips to over a dozen destinations if booked between April 16-20; 25% off 2012 Antarctica voyages (reserve by May 15); and up to 50% on a handful of Egypt itineraries, now through year’s end. Plus, A&K is currently waiving or slashing (up to 75%) those pesky single supplements on popular programs to Machu Picchu, Bhutan, Jordan, and more.

Trip to Take: Be the first to try the company’s new 15-night Arctic cruise departing July 15, 2013 aboard the 199-passenger MV Le Boreal for a foray into polar bear country: the ship features a high-tech stabilizing system for navigating the rough northern seas, while the twice-daily shore excursions led by strapping, onboard know-it-alls (naturalists, geologists, and marine biologists) take you past soaring glaciers in Norway, Greenland’s traditional Inuit villages, and an extinct volcano in Iceland. From $11,995 per person including most beverages and tips. 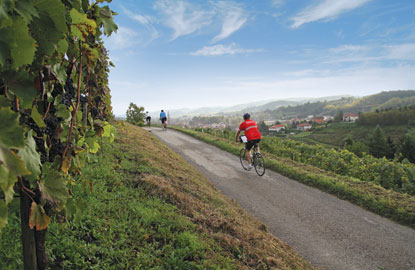 Why They’re the Best: Since 1966, Butterfield and Robinson‘s biking and walking tours encourage travelers to “slow down to see the world.” From cycling in New Zealand and Myanmar to gorilla tracking in Rwanda, count on all of B&R’s trips to feature capable guides, interesting paths, and drool-worthy hotels full of local flavor. Professional “trip designers” in the Bespoke department make your wishes their self-stylized commands, while spring sees the launch of innovative new “Bistro” trips in France and Italy offering more laid back, independent, and cheaper alternatives to B&R’s original signature excursions, featuring family-run hotels where character and warmth trumps 500-thread count sheets. Boost your own pedal power by requesting one of new electric “e-bikes” added to their European fleet this year to whiz and wind along the Old Continent’s roads with a tad less effort.

Trip to Take: Classified as “vintage” B&R, the 5-night Burgundy Bistro Biking to trace glide past grand cru vinyards, savor a private picnic in medieval Beaune and partake in a guided visit to the Hospices in Haute Cotes. From $3,995 per person, not including airfare. 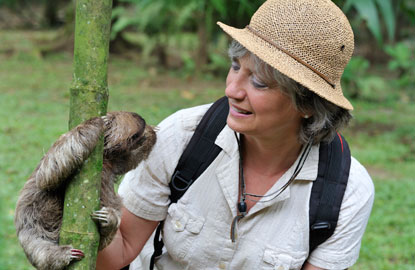 
Why They’re the Best: With arguably the industry’s best client-to-guide ratio (often 2:1) and custom guided tour prices in over 90 countries averaging just $250 per person per day (around 30% less than group trips elsewhere), Kensington has a leg up on its competitors. Its Antarctic safaris (there’s even a quickie day trip from Cape Town!) are top notch, featuring mountain climbing, visits to emperor penguin colonies, champagne lunches on the ice, and accommodations in a luxury tented camp. Launched in 2010, Kensington’s Explorer-in-Residence itineraries offer the rare privilege of traveling on bespoke adventures with world-famous explorers, like Mikael Strandberg, a Swede who spent a year with Patagonia’s gauchos and biked 20,500 miles from Norway to South Africa, or Richard Wiese, who skied across the North Pole and discovered 29 new life forms on Mt. Kilimanjaro. Other client-friendly touches include a personalized pre-departure website to provide you with up-to-the-minute itinerary info, plus reliable, local staff on hand with 24-hour support if you need to spontaneously re-route.

Trip to Take: Book the ‘7 Nights for 5’ Spring Costa Rica promotion (valid April 20 – June 15, 2012) and enjoy peaceful rainforest hikes, pilgrimages to colonial churches, swimming in waterfalls, horseback riding on the beach, and bedding down at an intimate eco-hotel on an organic coffee plantation. From $2208/person not including airfare. 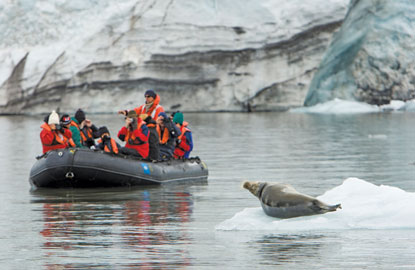 Unparalleled voyages of science and discovery.

Why They’re the Best: Founded in 1979, Linblad Expeditions’ educational voyages span the world from top to bottom, focusing on high tech, environmentally-savvy adventures and small ship travels, while boasting all the benefits you’d expect from a partnership with National Geographic like exclusive onboard workshops with world-renowned scientists, innovative itineraries in stunning natural settings, and state-of-the-art exploration tools. All vessels feature a fleet of kayaks and Zodiacs for accessing remote beaches and hidden coves, and flexible agendas allowing passengers to pick and choose daily activities at will. The coup de grace? Certified photography instructors who’ll show you how to snap magazine-worthy shots.

Trip to Take: Linblad is debuting their Undersea Alaska program in May with weekly, 7-night “Exploring Alaska’s Coastal Wilderness” jaunts aboard the twin 62-passenger National Geographic Sea Bird and Sea Lion. While plying the waters of Southeast Alaska in search of calving glaciers and breaching whales, you’ll hear lectures by researchers from the Alaska Whale Foundation, be guided by a native Tlingit interpreter, and gain special entry privileges to Tongass National Forest and Glacier Bay National Park. This year, the new program throws hydrophones (underwater microphones) and high def video cameras (wielded by an “undersea specialist”) into the mix, for capturing whale songs and footage of the action 40 to 80 feet beneath the waves. From $5,990 per person, double occupancy. Book by April 30 free round-trip airfare from Seattle to Juneau on select June departures. 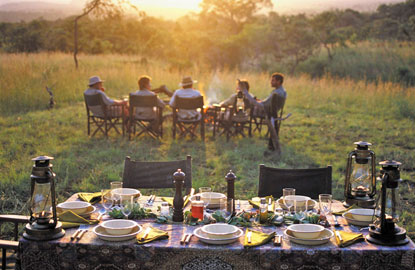 Uber-luxe safaris with a heart.

Why They’re the Best: Nobody offers a grander level of bush luxury than family-owned, New York-based Micato Safaris – whose itineraries offer a ravishing myriad of experiences from savannah-side yoga sessions and tribal encounters to moonlit game drives in the Serengeti. Meanwhile, its ever-growing cadre of extravagant lodges, raised bungalows, and boutique ranches (such as the newly acquired Tawi Lodge at the foot of Kilimanjaro) feature indulgences like private plunge pools, fireplaces, and personal butlers. Micato’s reach extends to India, too, inviting travelers to dine in royal palaces, heli-ski in the Himalayas, or attend a Bollywood movie shoot. Voluntourists happily take note: For every safari booked, Micato sends one African child in Nairobi‘s Mukuru slum to school. Also, as of this year, all gratuities are pre-included in each trip’s cost.

Trip to Take: Micato’s stellar new 7-night, “Farm-to-Table, Vine-to-Glass” tour of South Africa combines dinners at the country’s hottest restaurants (such as The Foodbarn, where Leonardo DiCaprio and Oprah have dined on entrees like lamb fillet served with Jagermeister jus and macadamia cauliflower stuffing) with private, home-cooked meals of Afrikaner specialties, organic country lunches, and drives through the Cape Winelands. Round out the journey with cheetah and elephant tracking by day and honing your cooking skills by night, before the grand finale of a Bedouin-style candlelight dinner in the bush. From $13,775 per person, double occupancy (sans airfare). 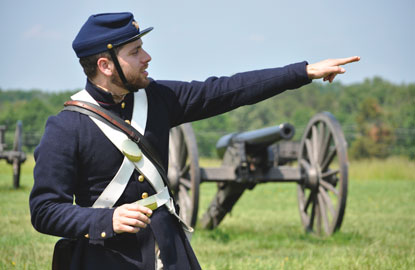 Trip to Take: History buffs should book the upcoming Civil War Event (May 20 & October 14) in Washington D.C. hosted by award-winning documentary filmmaker Ken Burns. The 300-guest, five-day affair (the 2011 debut sold out) includes private, guided tours of battlefields and museums; talks by noted Civil War experts; exclusive after-hours cocktail galas in historic buildings like the National Archives and Portrait Gallery; and chance to stay at the historic Willard Intercontinental which hosted Lincoln and Ulysses S. Grant in the 1860s From $3,990 per person, double occupancy 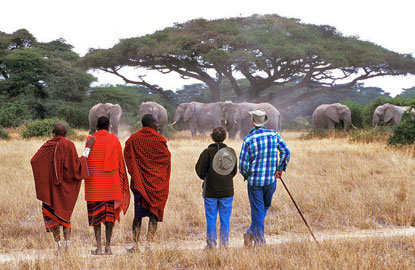 Eco outfit ventures off the beaten path without sacrificing style.

Why They’re the Best: Seattle-based Wildland Adventures (since 1986) steals a spot on our list for its premier ecotourism explorations. The “active luxury” outfit’s 130 itineraries span 28 countries, stressing conservation and touting true-blue, authentic touches: for instance, indigenous-only guides take you on less-traveled routes of fragile natural and cultural environments, from hiking in Patagonia and sailing Turkey’s Turquoise Coast, to exploring Kenya‘s savanna on foot with Maasai warriors while learning about wildlife conservation and traditional healing, beading, and rites of passage.

Trip to Take: In light of its 25th anniversary, Wild Anniversary Adventures offers expeditions to new destinations, each escorted by Wildland’s founder Kurt Kutay, a champion pioneer of ecotourism movement (or expert program directors). There’s still one cabin left on July 5’s 10-night Galapagos Land and Sea Safari – where you’ll ply the waters off the coast of Ecuador via 16 passenger catamaran, take a ceviche cooking class, and bed down at a luxurious tented camp with hammocks, an infinity pool, and gourmet grub sourced from an on-site farm.From $6,795/person, not including international airfare.