By Bob Thompson, author of Born on a Mountaintop 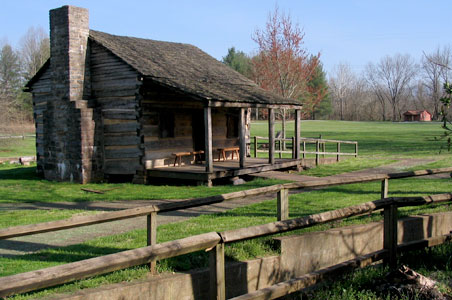 History is a great traveling companion: It takes you places you might otherwise never go, then helps you see beneath the 21st-century surface of things. While on the trail of one of America’s most irresistible characters, Davy Crockett, I found myself enthralled by the frontier landscapes he helped pioneer.

Crockett was a Tennessee politician and Alamo hero whose legend was revived when—more than a century after his death—Walt Disney turned him into the King of the Wild Frontier. He wasn’t really born on a mountaintop, as the song would have it, but Tennessee’s Davy Crockett Birthplace State Park is still the place to start a Crockett road trip. Ninety minutes east of Knoxville, on the banks of the Nolichucky River, it shares its quiet natural beauty with a replica Crockett cabin. A few years after Davy’s 1786 birth, the Crockett family moved to Morristown, where they opened a tavern. The Crockett Tavern Museum gives a vivid feel for the cramped rigors of frontier life. In Knoxville, the East Tennessee Historical Society’s museum displays one of the great Crockett artifacts, a rifle he owned as a young man. 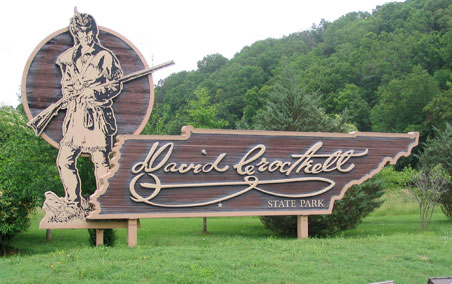 Poor but ambitious, Crockett kept moving west. One midlife move took him to Lawrenceburg, which I think of as The Town Walt Disney Forgot. An hour and a half southwest of Nashville, it was just a dot on a map in Disney’s TV series, but it’s central to the real Crockett’s history. It’s where he launched his political career and where a flood washed away his entrepreneurial hopes along with a mill-and-distillery complex he’d built. You’ll find both stories told well at David Crockett State Park, which uses the name the real man preferred, and you can admire a bronze statue of a hat-waving Crockett in the town square. But Lawrenceburg’s most fascinating site is a nearby replica of the up-and-coming politician’s office. Hand-lettered panels lay out his life story and a wonderfully odd collection of artifacts—a hero-worshipping poem, the program for a musical drama about David, and, for some reason, a stuffed ferret—make you feel as if you’re walking around inside a time capsule.

Crockett’s last Tennessee home lies two hours north of Memphis in the small town of Rutherford, which built the David Crockett Cabin Museum in his honor. Among its attractions are his mother’s grave; her remains were reinterred there during the 1950s Crockett craze. The story of how that happened involves Rebecca Crockett’s posthumous appearance on Queen for a Day, and it’s worth asking the cabin’s harmonica-playing curator, Joe Bone, to tell it in full. 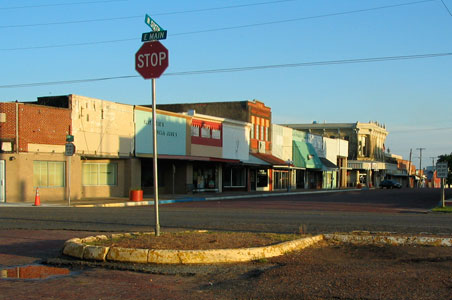 After losing his seat in Congress, in 1835, Crockett rode off to explore Texas. Tradition has it that he crossed the Red River near Clarksville and camped in what would become Honey Grove. Once a 19th-century boomtown filled with hotels and opera houses that drew patrons from Dallas, 90 miles to the southwest, Honey Grove is now a gorgeous, ghostly archetype of small-town decay. History-minded residents can point you toward the spot Crockett is said to have camped, and if you’re lucky, you may see a herd of privately-owned buffalo grazing there.

Among Crockett’s other Texas stops were Nacogdoches (where you can walk the same floors he walked when he stayed at what’s now the Sterne-Hoya House Museum) and Washington-on-the-Brazos (where Texas declared its independence from Mexico). But nothing, of course, compares to San Antonio as a Crockett site. The Alamo manages to be both an unabashed shrine to David, Jim Bowie, William Barret Travis, and the roughly 200 Texans who fought and died there on March 6, 1836, and a modern history museum that works hard to contextualize the battle. The iconic structure you see now, however, is only a small part of the old Spanish mission-fortress that Crockett and his comrades tried to defend against a vastly superior Mexican force. 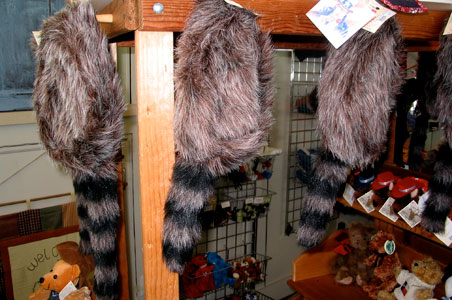 Before my first visit, I got some excellent advice from Stephen Harrigan, author of The Gates of the Alamo, who told me to begin my tour at the History Shop on East Houston Street. There you’ll find a detailed diorama of the Alamo as it looked in Crockett’s time, and you can hear the siege and battle narrated by Alamo-obsessed rock star Phil Collins, who does a nice job of setting the scene for Davy Crockett’s epic final act.

Bob Thompson grew up in New England and studied history at Stanford University. He spent 24 years at the Washington Post, where he edited the Post’s Sunday magazine, wrote profiles for the Style section, and developed a particular interest in bringing complex historical narratives to life. Born on a Mountaintop, published this month, is his first book.