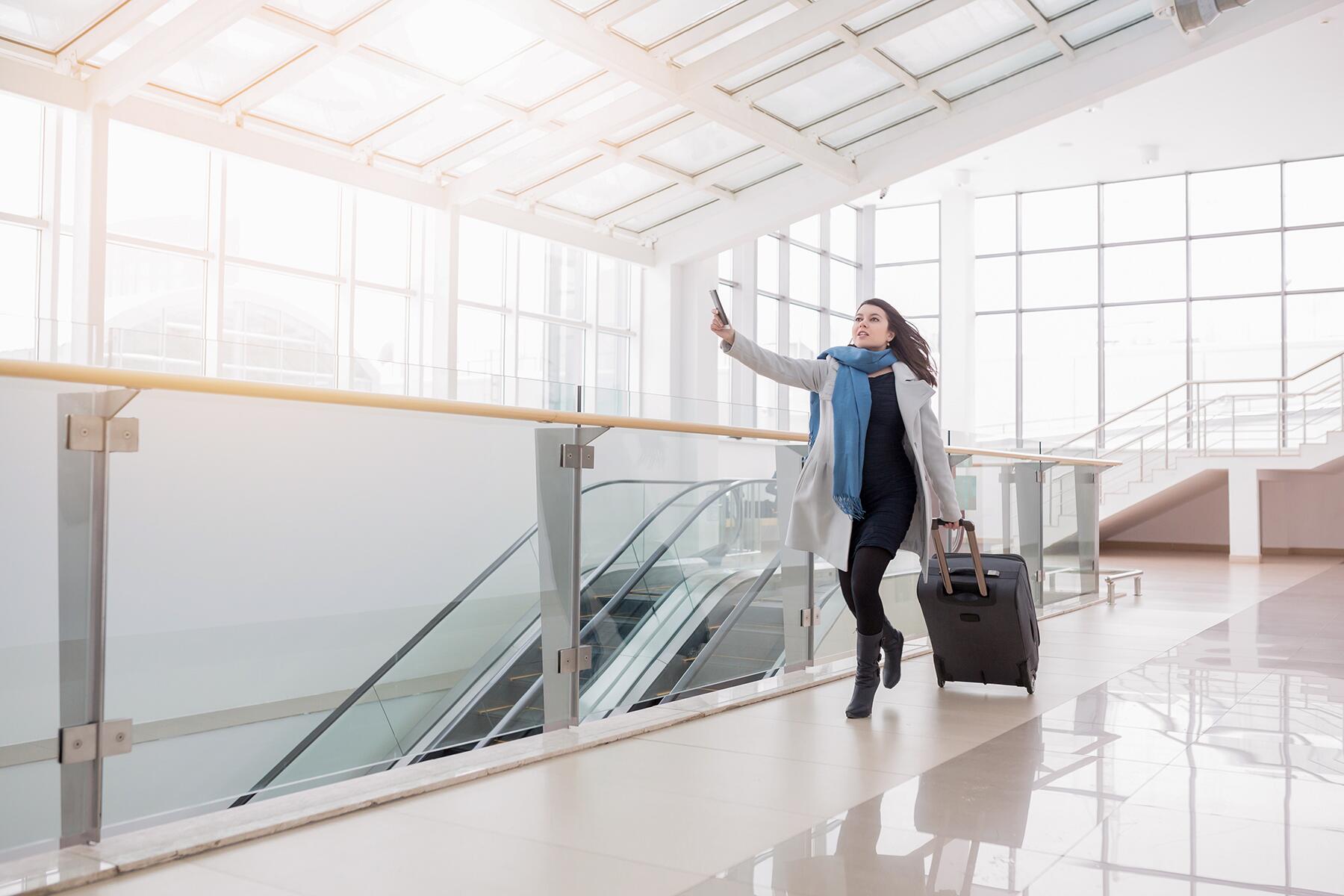 We’re tired of seeing unrealistic airport looks worn by celebrities: full face of makeup and not a flyaway in sight. So, we found flyers who are still fabulous, but with down to earth airport looks.

You’ve seen those paparazzi shots of glamorous celebs descending from a red-eye transoceanic flights looking like they just stepped off the runway. No duh. The glitterati have endless money. They fly first class. And they have stylists. The constant barrage of photos of the rich and famous creates unrealistic expectations for the rest of us commoners when we travel. So, Fodor’s decamped to JFK Airport in New York City to look for regular, everyday travelers who managed to look chic, without needing a flatbed seat and a glam squad.

Turns out Terminal 1 is full of vogue-ish voyagers. Here are some of our favorite looks. 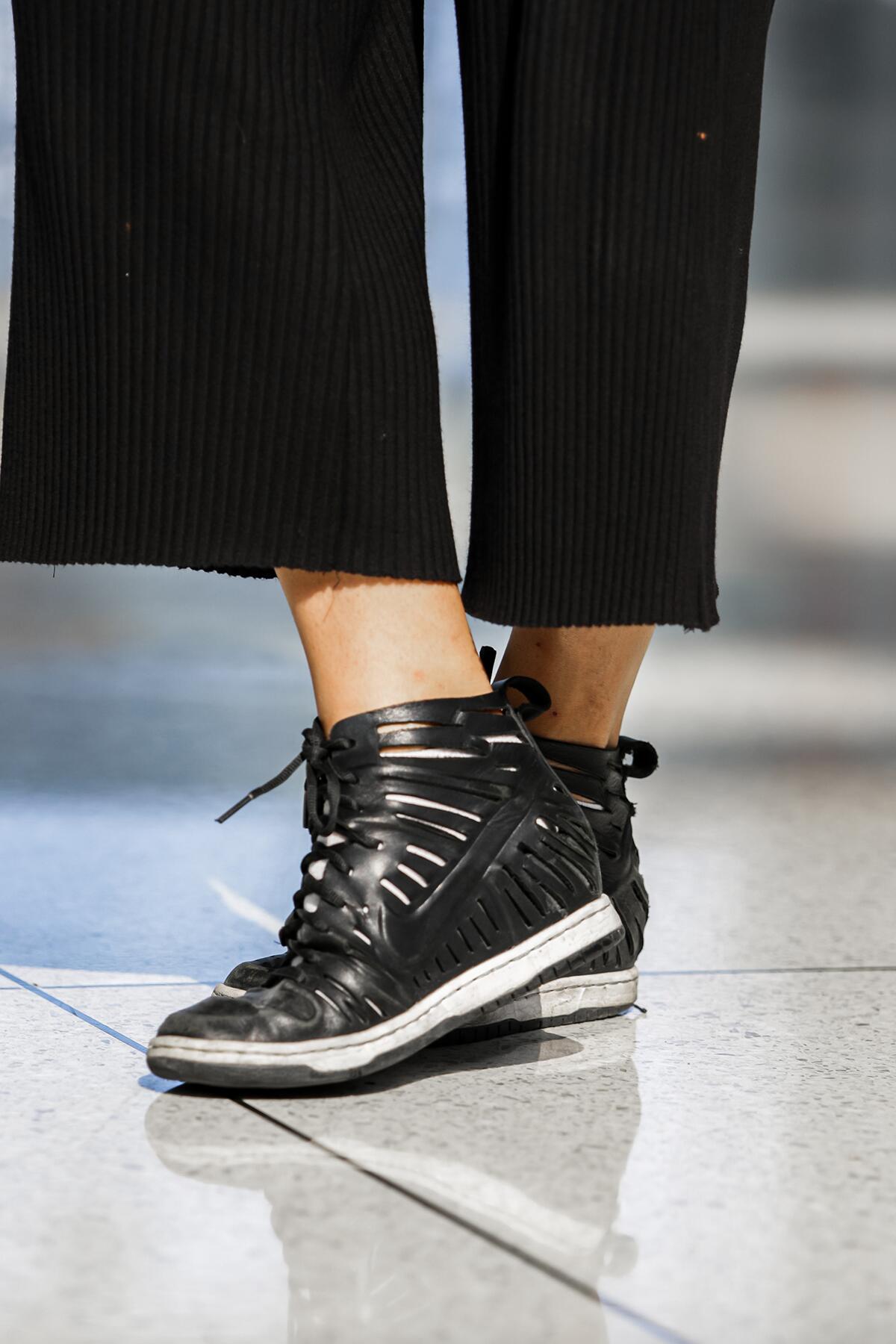 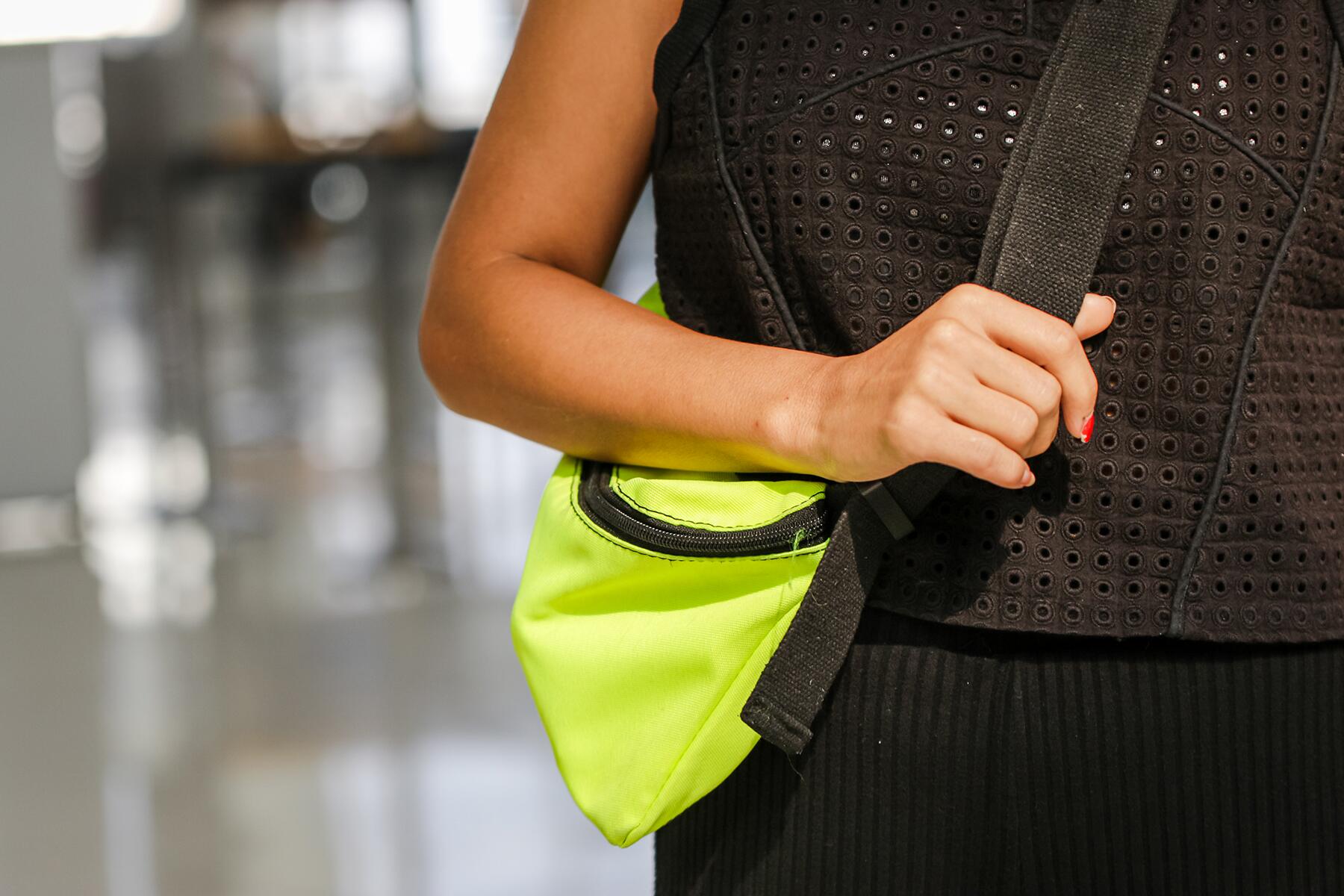 All Black but Definitely Not Basic

Janina, a Brooklyn resident by way of Berlin, takes the seven-hour flight home four times a year. Alivio describes her style as architectural: “I think more in terms of shape and texture when I get dressed.”

During a flight, “I want to look good but also be as comfortable as possible, but not comfortable as in stretchy pants and Uggs,” she explains. “That’s a little too comfortable. Like lounging-on-your-living-room-couch comfortable.”

As for her airport outfit, the Fashion Institute of Technology graduate and UX designer said, “I’m wearing all black but if you look closely you can see everything has a pattern so it’s not boring.” As for her haircut, which Alivio calls a “three-in-one special,” it can be worn as a bowl cut when she’s out on the town, a bob when she’s on a job interview and when traveling, she twists it high on top of her head so she can comfortably lean her head back on the headrest and snooze. 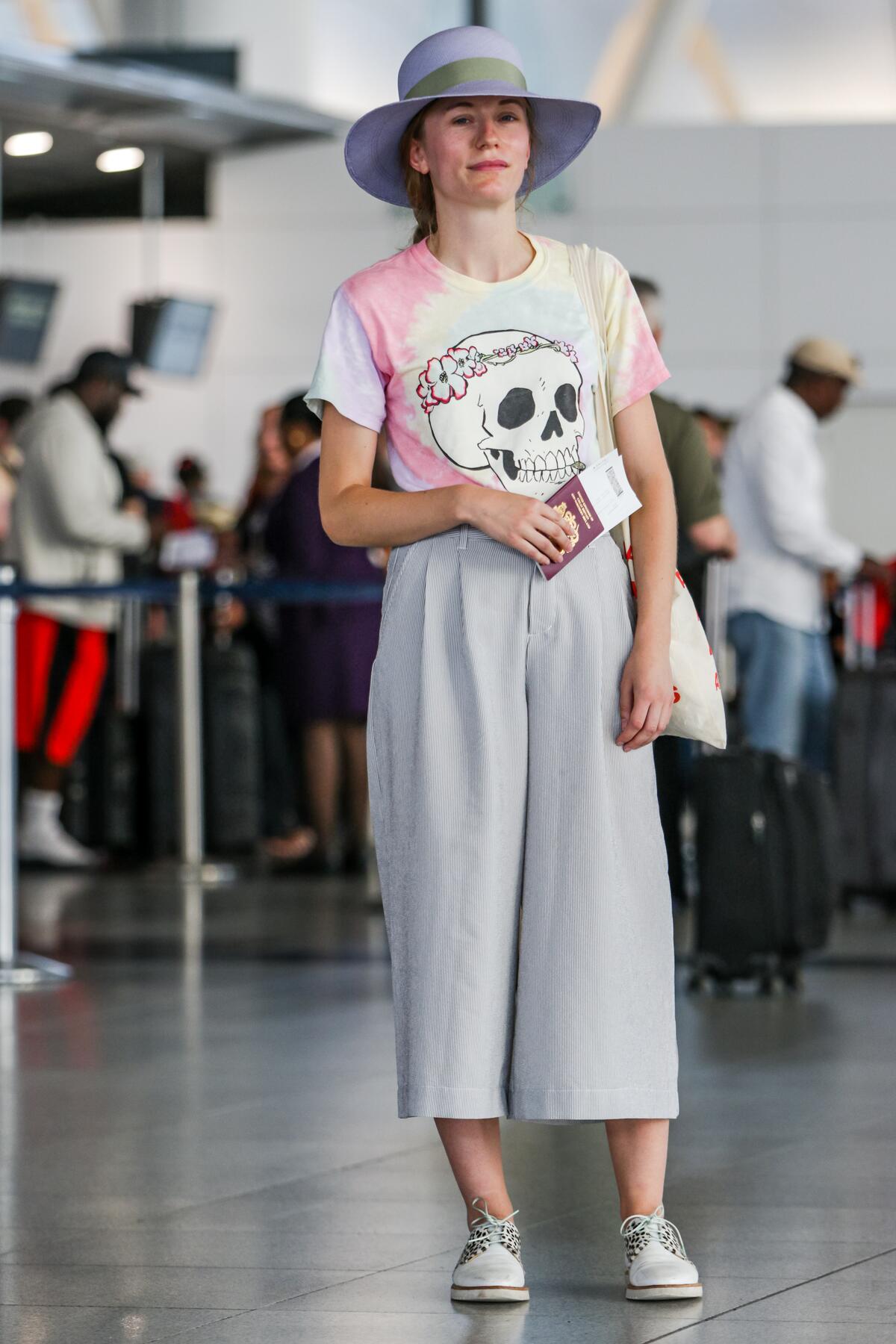 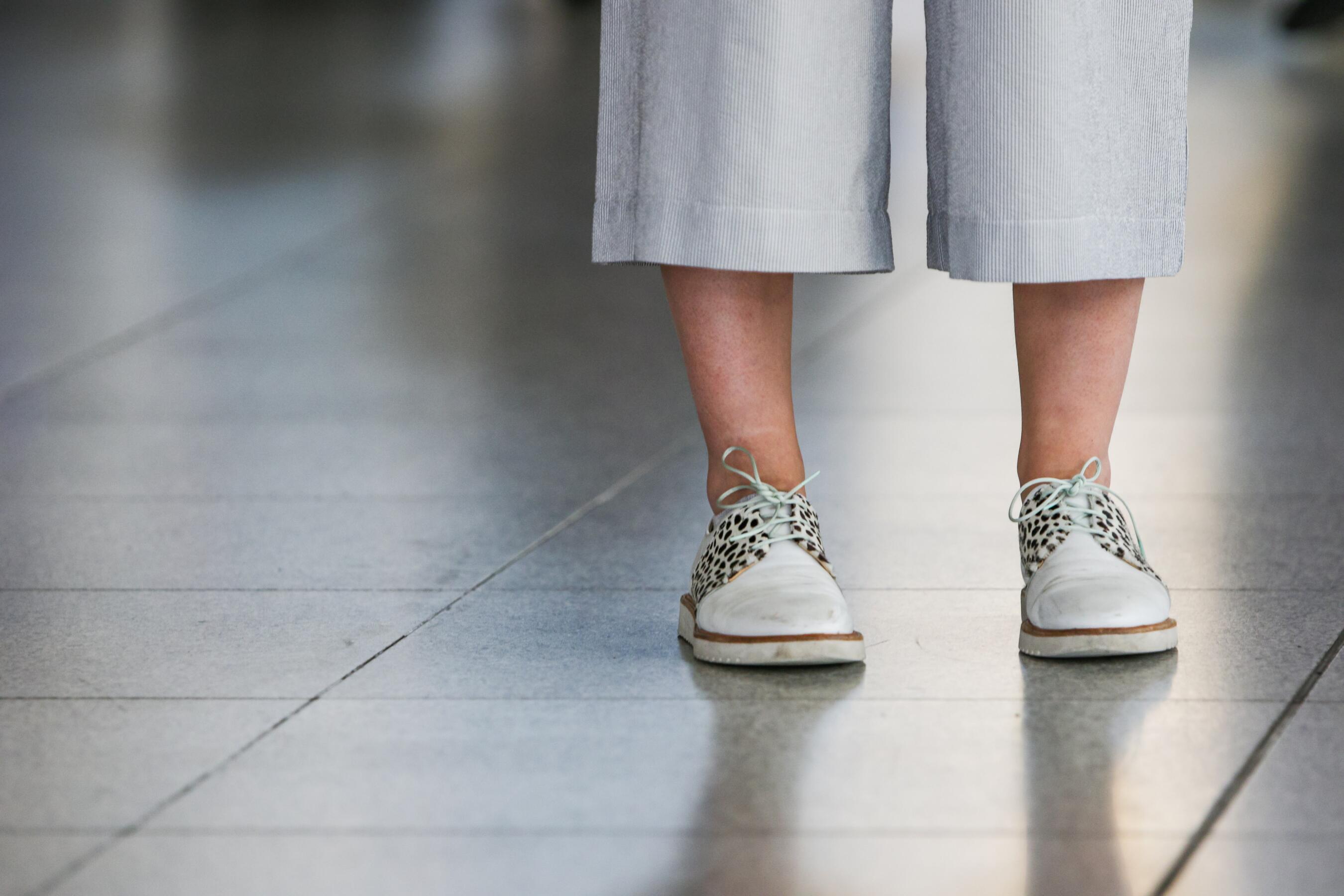 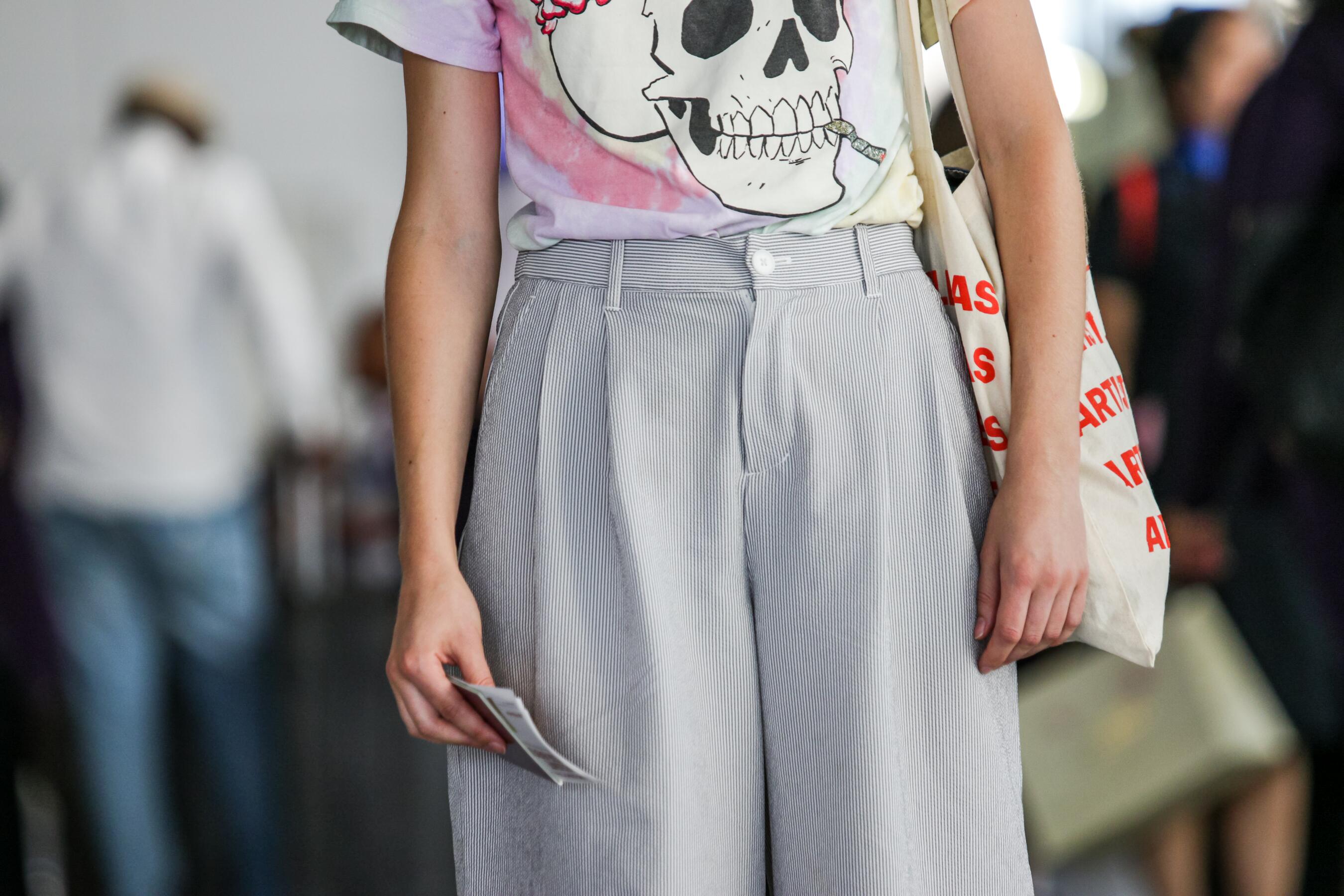 Like many travelers, UK native Sophie Tomlinson likes to squeeze every last possible minute out of her vacation. She spent her last day exploring NYC and then darted directly to the airport to nab her flight back to Paris, where she had to report for work the next day.

“This outfit basically had to work for sightseeing in NY, a flight to Europe and then arriving back home in,” said Tomlinson, a 29-year-old digital policy manager, who describes her style as “hippie eclectic.”

Like many of us, she also likes to shop when she’s abroad. Tomlinson chose to fly in her seersucker culottes, which she picked up in Japan, “because I wanted something that doesn’t fit too close to my body and keeps the A/C off my legs.” The tie-dye skull T-shirt and animal print saddle shoes add some edge to the outfit. Her lavender Panama hat, which Tomlinson designed herself at a chapellerie in Paris, got jammed in the metal detector on the way to NYC and now she’s super protective over it after that near-miss. “I’m keeping it on my lap the whole flight,” she said. 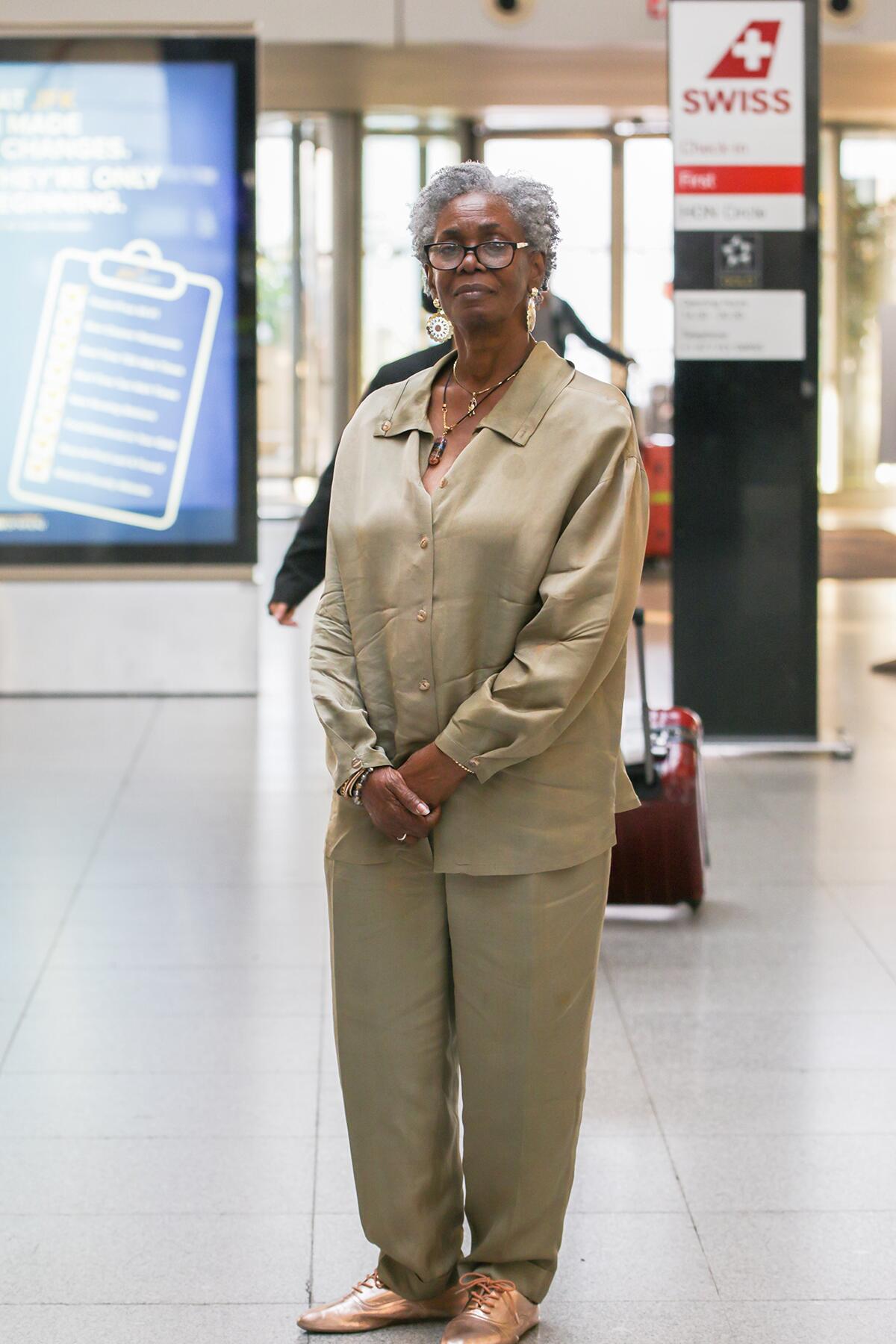 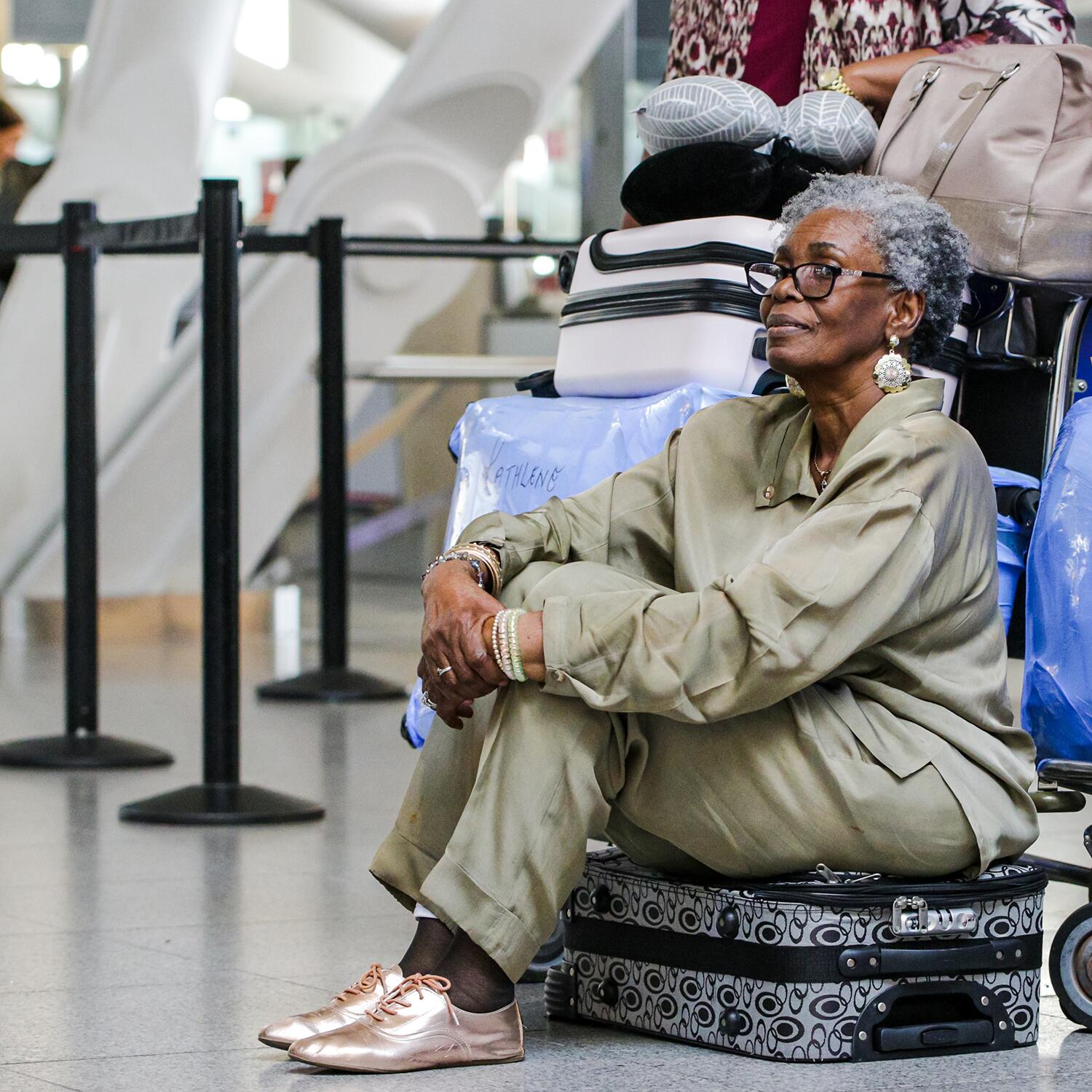 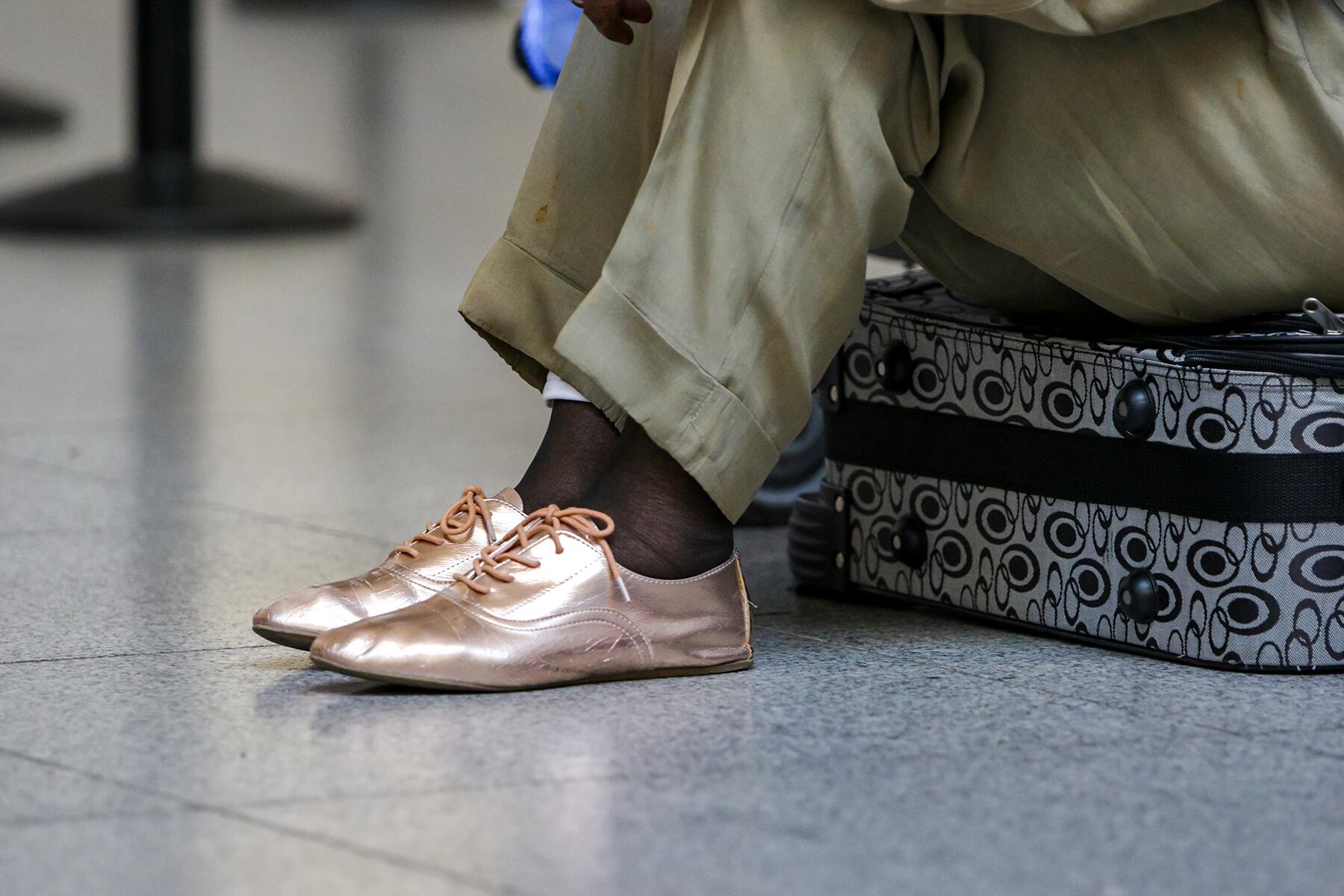 Una Hall’s sister gets a wee bit nervous when they are flying back home to visit family in Trinidad and Tobago. They ended up at the airport six hours early. “It’s four-o’clock and the flight’s at midnight,” said Hall, a 73-year-old certified nursing assistant from Boston. “We come early and we wait.”

Hall’s approach to dressing for a flight reflects her everyday style. “It has to be a nice color and it all has to match. My handbag and my shoes always match,” said Hall, who is also known for changing up her looks. “I’m always looking different. Sometimes you see me and you can’t make me out.” 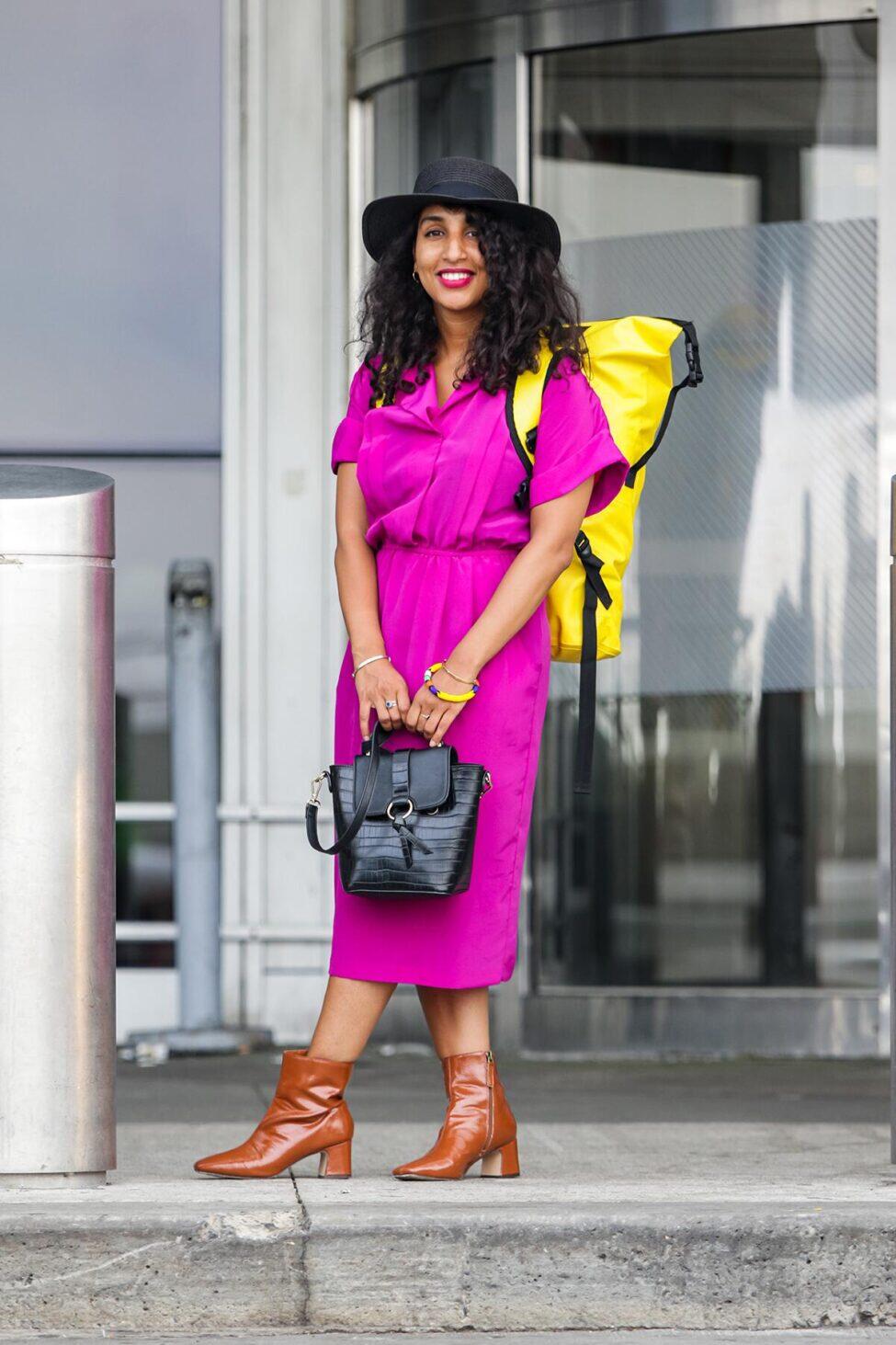 Hanane Baghdali, a Moroccan living in Brussels, works as a business analyst for an airline and was flying standby. “I chose this dress because I thought it would give me a better chance of getting bumped up to business class,” Baghdali explained. “People generally look stylish in business class. You can’t really be wearing an NYPD T-shirt and leggings.

“So this outfit is kind of a manipulation, basically,” she joked.

Her rule of travel fashion is to travel light. Her yellow Spilbergen roll-top drybag backpack is all she took for a four-day trip to NYC, where she was shocked at how nice everyone was. “I thought New York was going to be the French version of America with a lot of non-smiling people,” Baghdali said. “But I had people here buying me a ticket for the metro and someone else gave me cookies. That wouldn’t happen in Paris.” 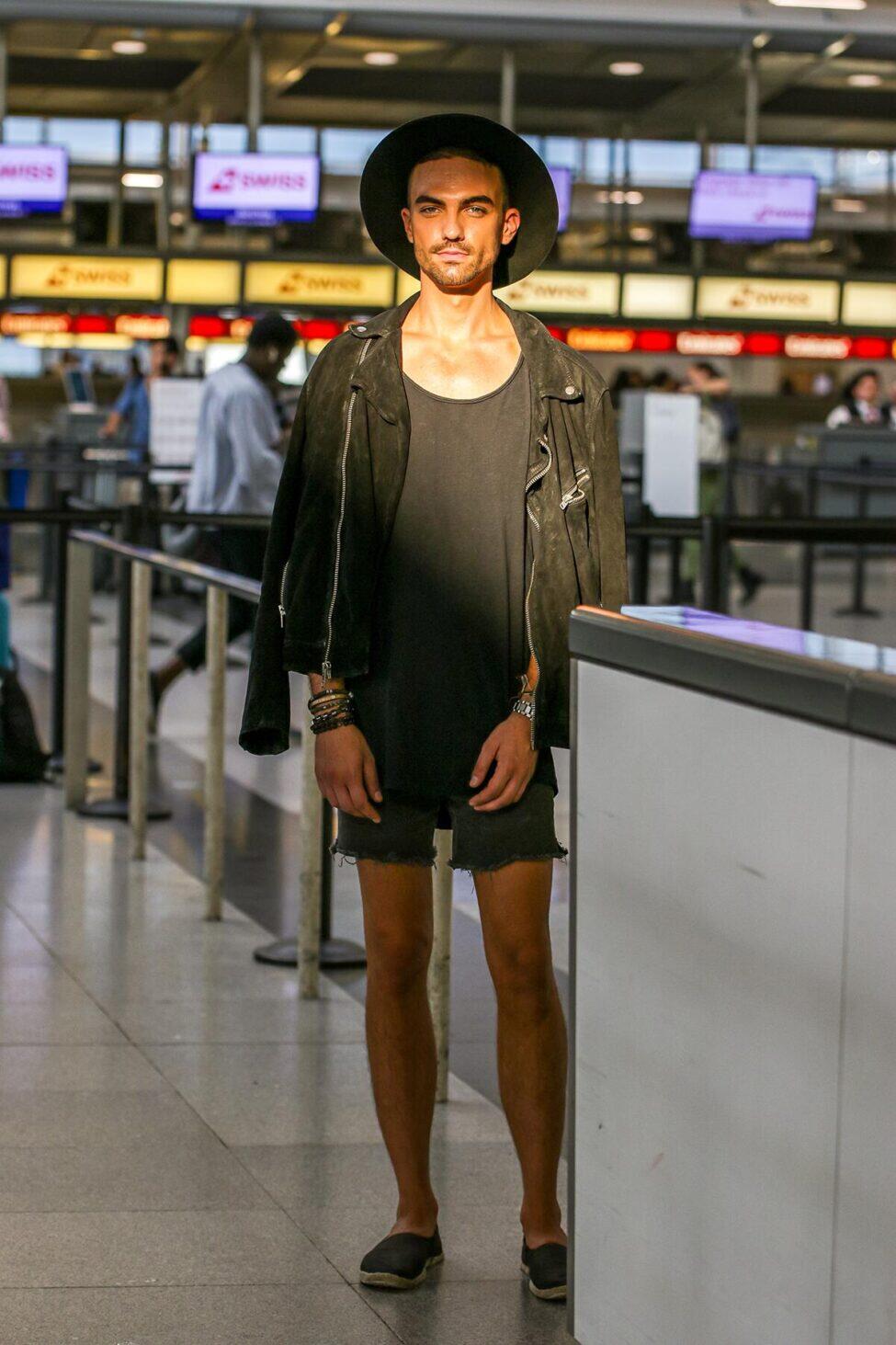 Rock and Roll, but Chic

Mattias Wennmark, a 30-year-old from Sweden makes the NYC to Stockholm trip about five times a year. “I like looking rock-and-roll but still simple and chic,” Wennmark said. “All black is easy to mix and match but I prefer a washed-out black.

“You have to bring a jacket in case it gets cold on the plane. This one is suede and super easy to throw over your shoulders.” The boatneck tee and cutoff shorts are from H&M, including the espadrilles he bought for a trip to Mykonos and hasn’t taken them off since.

“Also, I’m a hat person. It’s going to be down over my eyes as soon as I get my seatbelt on. So people know not to disturb you.”