Seeing the Canadian Rockies by Rail

Like a full-bodied goblet of cabernet sauvignon, the glacier-fed creeks and frosted peaks of the Canadian Rockies are meant to be savored at a meandering pace. Rather than a bird’s eye view by plane, or a passing highway glance by car, chugging along ties and tracks of Canada’s first passage to the West seems the best way to stare, wide-eyed, at the old-growth rainforests, raging rivers, and rocky outcroppings between Alberta’s summits and BC’s Pacific Ocean. Add a glass-encased coach, executive chef-prepared cuisine, and happy hour starting at 11am—it’s five o’clock somewhere—and you’re on wildlife watch with a glass of red. Introducing the Rockies by rail. 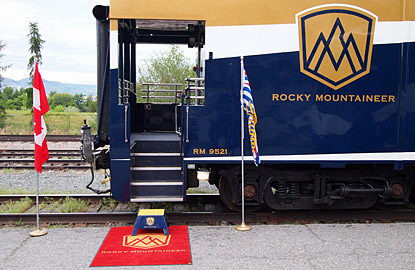 Upon arrival at the industrial-chic Vancouver station, you realize the Rocky Mountaineer journey will be like no other. The first indication: staff beckon guests with an “all aboard” welcome and a bagpipe processional leads to the train. Between the Canadian and British Columbian flags, I walk along a red carpet (literally) into GoldLeaf car 07, seat 57. First things first, a toast to the road ahead led by one of the train’s executive sous chefs who clinks glasses with every guest.

Front or back, left or right, there’s not a bad seat in the coach. The glass-domed viewing area above and dining car below ensures nature narrates every moment. Sure, you could bring a book—as some did on my train—but the constantly changing scenery is much more riveting than words on paper. Read the landscape instead, it has a lot to say.

Before breakfast, Carlo, our train attendant and tour guide, appears with a steaming hand towel and a trolley of ‘Canadiana’ cuisine. He serves just-baked bannock (a scone-like recipe inspired by BC’s aboriginal peoples) with jam and butter, and a cup of coffee. Fearing I’ll spoil my breakfast, I try not to eat the entire biscuit. But with one bite, I give in. Four hours later, an appetizer again appears before lunch, this time its BC wine and cheese. At that moment, to say I was a happy camper doesn’t even begin do all this justice, so I look up through the glass roof and cheers to the snow-dusted ridges above. 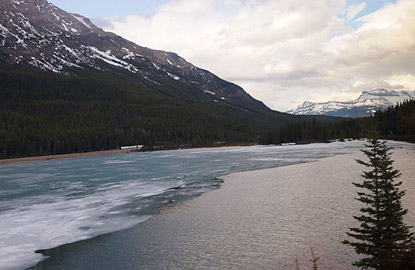 At important sights and points of interest, the already sauntering train slows even more along the historic rail route constructed 125 years prior. Day one takes us along the Fraser River—the longest river in BC flowing for 854 miles—and beside the ferocious Hell’s Gate, dubbed as such due to a constricting, 111-feet wide section forcing 750 million gallons of water through each minute. An hour later, a calm washes over our coach as we pass by yellow and purple wildflowers painting the landscape.

Insider Tip: Have your camera ready at all times. The wild scenery is always changing. 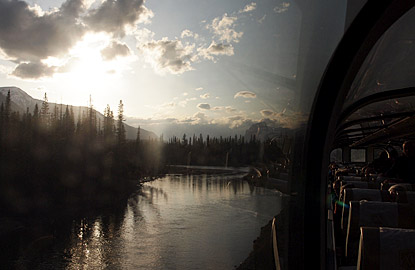 Day two forges ahead through over-hanging trees, beside expansive lakes, and into the Rockies by way of the 1913-1916-built Connaught Tunnel. Almost 100 years ago it cost a staggering 9 million to construct—a quarter of which was devoted to dynamite—and carve the five-mile passageway through the mountain. Resurfacing on the other side, the landscape changes; the glacial water is pastel green, the peaks are higher and more jagged, and the wildlife sightings more plentiful.

Insider Tip: Book in the early season for a greater possibility of wildlife viewing. As the season progresses, the animals retreat into the alpine meadows.

The entire trip provides a feast for the eyes and the stomach, but pay close attention in the last three hours. This is the crescendo. Grizzlies play beside the tracks, mountain goats navigate the steep rock faces in the distance, and bald eagles soar above. With every wildlife sighting our coach erupts in jubilee with the intensity and excitement of preschoolers at their first singing performance. Nobody is seated. Everyone stands at attention, and once again, we toast. This time with a glass of Baileys to Banff, beavers, and bears. Oh my!

There are three classes of service: RedLeaf, SilverLeaf, and GoldLeaf. Silver and GoldLeaf each enjoy glass-domed coaches, which are recommended for optimal nature viewing.

Prices start at $850 per person for the First Passage to the West. This includes the train journey and an overnight hotel. If you want to go for the Gold, prices start at $1900.

Not sure you want to commit to slow-going train travel? Start with the Vancouver to Whistler ride for $149 one-way/ $259 round trip.

Rocky Mountaineer and its union are currently involved in an ongoing labor dispute. This does not impact service or schedule.

Thinking of a trip the Canadian Rockies?

For up-to-the-minute hotel and restaurant recommendations, plus the best planning advice, check out our Banff and the Canadian Rockies Travel Guide.