News Apeksha Bhateja What Are the Chances You'll Get Monkeypox at a Hotel?
NewsRoad Trip of a Lifetime: New Zealand by RV

Road Trip of a Lifetime: New Zealand by RV 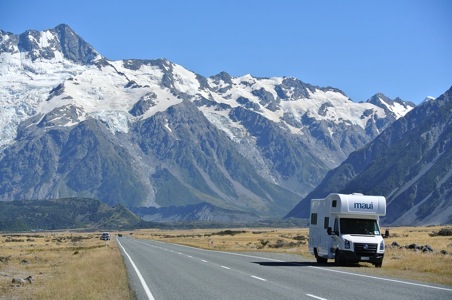 Respond to both the call of the wild and the lure of the open road with the ultimate road trip through the New Zealand terrain, where winding roads weave their way through incredible wilderness. Despite the country’s relatively compact size, diversions are plentiful—a staggering one-third of New Zealand is designated national parkland—and plotting a route requires some choice prioritizing. For our recent road trip, my partner and I settled on a slice of the South Island running between Queenstown and Christchurch (two regional hubs worthy of further exploration on either end), and in just one week turned over one dramatic natural setting for the next—wine country for mountain peaks for glacier-fed lakes for rolling farmland—where sheep seemed to outnumber people, and stretches of nature proved ripe for hiking, climbing, and camping.

We took camping to the next level by renting a campervan (essentially a miniaturized RV), a beloved national pastime for Kiwis. For visitors, it’s a fun subculture to sample, offering a cost-effective and efficient means of turtle-like travel, with your transportation, lodging, and a working kitchen all neatly bundled into one.

Best of all, these souped-up hotel rooms-on-wheels allow for flexibility with travel plans, while getting you front-row seats for Mother Nature’s handiwork—drive till you see something that strikes you, then stay awhile—or don’t. Set up an impromptu picnic at a lake’s edge, or find a grassy knoll with sweeping views and linger for a day or two for the ultimate room with a view.

You needn’t travel far to find a place to park—the New Zealand landscape is littered with well-equipped “holiday parks” that accommodate campervans, where you can plug in your vehicle, and access hot showers and bathrooms, communal kitchens, laundry facilities, and other campervan necessities like water hookups (to refill your tanks) and dumping stations (for waste removal). 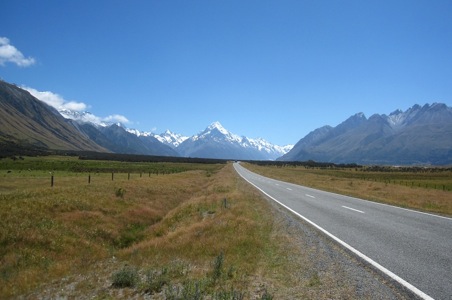 More primitive, non-powered campsites provide a cheaper alternative, with Department of Conservation (DOC) campsites offering basic facilities (like toilets and running water) in scenic settings. Or, try out “freedom camping,” which effectively allows travelers to park their vans (so long as they’re equipped with their own toilet facilities) overnight on just about any stretch of public land for free (just look out for signs indicating restrictions).

When choosing your campervan, like any savvy hermit crab, you’ll want your carry-along home to fit you well. Leave the bigger-is-better American mentality at home: We ended up getting upgraded to a deluxe Maui model that had lots of room and all the bells and whistles, but its oversized load practically demanded being pushed uphill, and proved too large to squeeze into standard parking spaces. There’s a huge range of campervan styles and price points to choose from, ranging from more compact no-frills versions that won’t guzzle as much gas to fully loaded behemoths with showers and toilets.

Vans typically come equipped with built-in-beds to sleep two to six, stoves, fridges, kitchen essentials, and, yes, even the kitchen sink; larger units come with an in-van shower and lavatory. The single biggest savings with this rental route is in the kitchen, since dining out in New Zealand is consistently expensive. We stocked up on groceries at a supermarket, and for about $150, had enough to cover most of our meals for the week, supplemented along the way with some farm-fresh fare sourced from a fruit stand, or a bottle of wine from a local vineyard.

We picked up our vehicle at the Britz rental agency in the Southern Alps stunner of a town, Queenstown, the adventure capital of New Zealand. We were soon on our way to Wanaka, a haven for outdoor enthusiasts, set on the banks of sparkling Lake Wanaka and surrounded by the mountains of Mount Aspiring National Park. 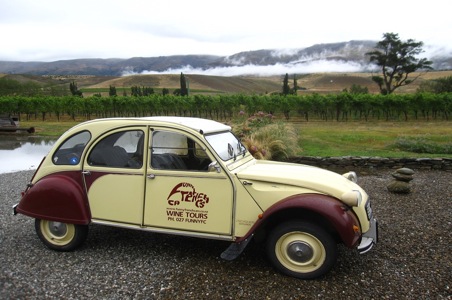 We parked at the Aspiring Campervan & Holiday Park (with great-value extras like complimentary Wi-Fi and a courtesy shuttle into town) for two nights, then took off for a 4WD jeep adventure with Ridgeline Adventures that brought us out to a local sheep station touting stunning panoramas over Wanaka’s high country. The next day, we again left the campervan in the lot and left the driving and guiding to the folks at Funny French Cars, who whisked us about wine-tasting in the Central Otago countryside (the Pinot Noirs here are world-class) in classic French Citroen 2CVs. 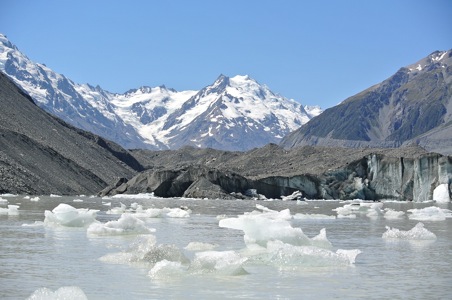 Next up was the rugged national park scenery of Aoraki Mount Cook, marking New Zealand’s highest peak (at 12,316 feet). The non-powered DOC-run White Horse Hill Camping Area offered basic facilities (no showers), but wonderfully showcased the area’s alpine splendor. Conveniently set at the start of several trailheads, we rolled out of bed the next morning and hit the Hooker Valley Track well before the masses arrived from town, winding through the alpine foothills and across two swing-bridges for incredible mountain and river views, before ending at an overlook above the Hooker Glacier terminal lake. Later, Glacier Explorers’ tour boats brought us out on the lake for a closer look at Tasman Glacier (New Zealand’s largest) and its breakaway chunks of floating icebergs. 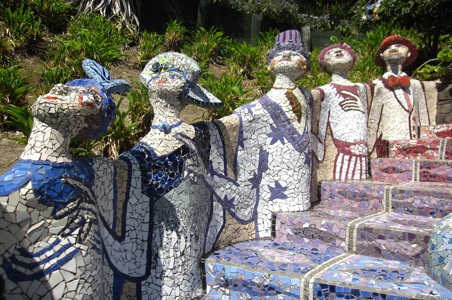 Before returning the campervan in Christchurch (the city’s still largely in recovery mode from the major quake that hit here two years ago), we detoured to the charmingly French-influenced port town of Akaroa, chockablock with boutiques, eateries, and art galleries (like the playful mosaic sculptures and terraced gardens at The Giants House), all set in the caldera of an ancient volcano. The Akaroa Top 10 Holiday Park afforded us a hilltop campervan perch with sweeping harbor views—where Black Cat Cruises later brought us to swim with Hector’s Dolphins, the world’s smallest and rarest dolphin species, for an unforgettable encounter.