News Robin Catalano Horses Run Wild on This Puerto Rican Island⁠—but for How Much Longer?
NewsJust Back From: Italy’s New High Speed Rail 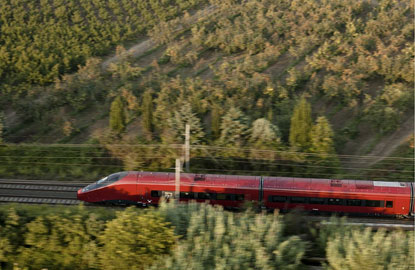 Italy’s new high speed rail service, Italo, first took to the rails last April and has been gathering rave reviews ever since.

The only alternative to the State-run Trenitalia, it connects six cities (Milan, Bologna, Florence, Rome, Naples, and Salerno), with a further three (Padova, Venice, and Turin) to be added in the coming months. The company’s chairman, Luca di Montezemoto, is also head of Ferrari, so it is no surprise that the sleek locomotives and carriages are a deep-red color with a top speed of 300 km (186 miles) an hour.

So does it live up to the hype? I took a trip to Florence last week, and booked a seat in the Prima carriage. The booking process is child’s play, with an easy-to-navigate website—prices are clearly listed, with special offers available even on the same day: my reduced Prima ticket cost almost the same as the full Smart option, and considerably less than rival Trenitalia’s cheapest full-price economy option. Tickets can also be bought at Casa Italo, a reception area in each station, with helpful staff and a small waiting area. The staff are, in fact, the friendliest I have ever encountered on any Italian journey. The moment I stepped onto the platform I was met by a stewardess—there is one at the door of each carriage—who pointed me towards my seat. The inspector exchanged banter with passengers as he checked their bookings, and was delighted to show me around the Club class. They are also efficient—a complaint about the use of a cell phone in the Prima Relax was dealt with immediately. All staff, of course, speak English.

This is Europe’s most modern train, and the carriages do not disappoint. Comfort is of the essence when travelling, and passengers can choose from three options—the least expensive are the Smart carriages, with large reclining leather seats and a vending machine for snacks and drinks. A cinema carriage is also available, with dropdown aircraft type screens, for a supplement of € 1. The Prima carriages have extra wide seats, with the silent Prima Relax aimed at anyone who hates listening to others speaking on their phones. The Club carriage has just 19 seats with two private areas and a member of staff on hand at all times. All carriages have video surveillance, so you can leave your luggage in the hallway and rest easy. 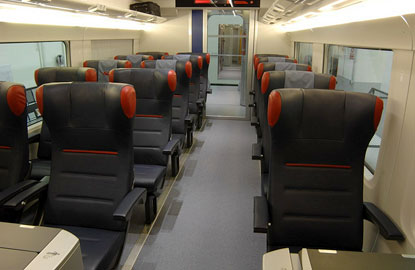 I found the seats in the Prima extremely comfortable and luxurious, with electric sockets and free WiFi access (available in all classes, although it is not quite high speed and sometimes non-existent). Windows are 20% larger than those of the rival fleet’s, so lovers of the Italian countryside won’t need their computers anyway.

I was served a complimentary snack and soft drink after each stop, and morning trips also get a free newspaper. A digital screen displays the current train speed and outside temperature.

High quality food is also served on board—the Italobox has a selection of regional specialities, produced by Eataly, who also have markets in New York and Tokyo. Menus rotate every two weeks, and are available at meal times, with breakfast also served on the non-stop Milan-Rome line.

Italo uses secondary stations in Milan and Rome (Turin will be Porta Susa), easily accessible by metro. Milan’s Porta Garibaldi is also the base for France-bound TGVs (Italo and TGV are built by the same company), while Rome’s sparse Tiburtina means a shorter stopover in the city (trains in Termini must change locomotives). The Italo experience is not over upon arrival in Florence and Naples—ticket holders have 24 hours free use of Florence’s public transport before or after the trip, and one hour in Naples. Italo hope to add other cities to the list.

Italo’s logo is a stylised hare, reflected in its speed. The Naples to Florence trip took just more than two and a half hours (2:37 to be exact), 19 minutes faster than Trenitalia. The brochure says ‘no stress’ and Italo is as good as its word.

Take a virtual tour of the train at ItaloTreno.it.