Has LA gone crazy? Or is this cup really worth it? We’ve drunk the Kool-Aid and we’re here to tell you how it tastes.

The world’s most expensive coffee is $601 per pound and just landed in Los Angeles. Why would you pay that much for a hot beverage? Mike Perry, owner of Klatch Coffee, is offering tastings so customers can find out for themselves if anything on earth could make a cup of coffee worth that much.

It’s a question, argues Perry, that fewer people ask about wine. The world’s most expensive bottle of the red stuff goes for $16,000 dollars and doesn’t regularly make headlines when it does. But coffee isn’t wine, at least not yet.

Perry says that the coffee he’s brought to Los Angeles will be the coffee to change all that, to bring complex and rare flavor profiles that will make the coffee world comparable to the wine world, in flavor and, eventually, in price. It’s either prescient or a pipe dream, but as Perry makes small talk with us before the tasting in Crafted Kitchen’s courtyard in Los Angeles, it’s impossible to tell which, which is an awkward position to put a journalist in. Doubly so when he gladly answers all questions except when we ask, “OK, just what the eff makes this coffee so good?” which is the only one we want to be answered. 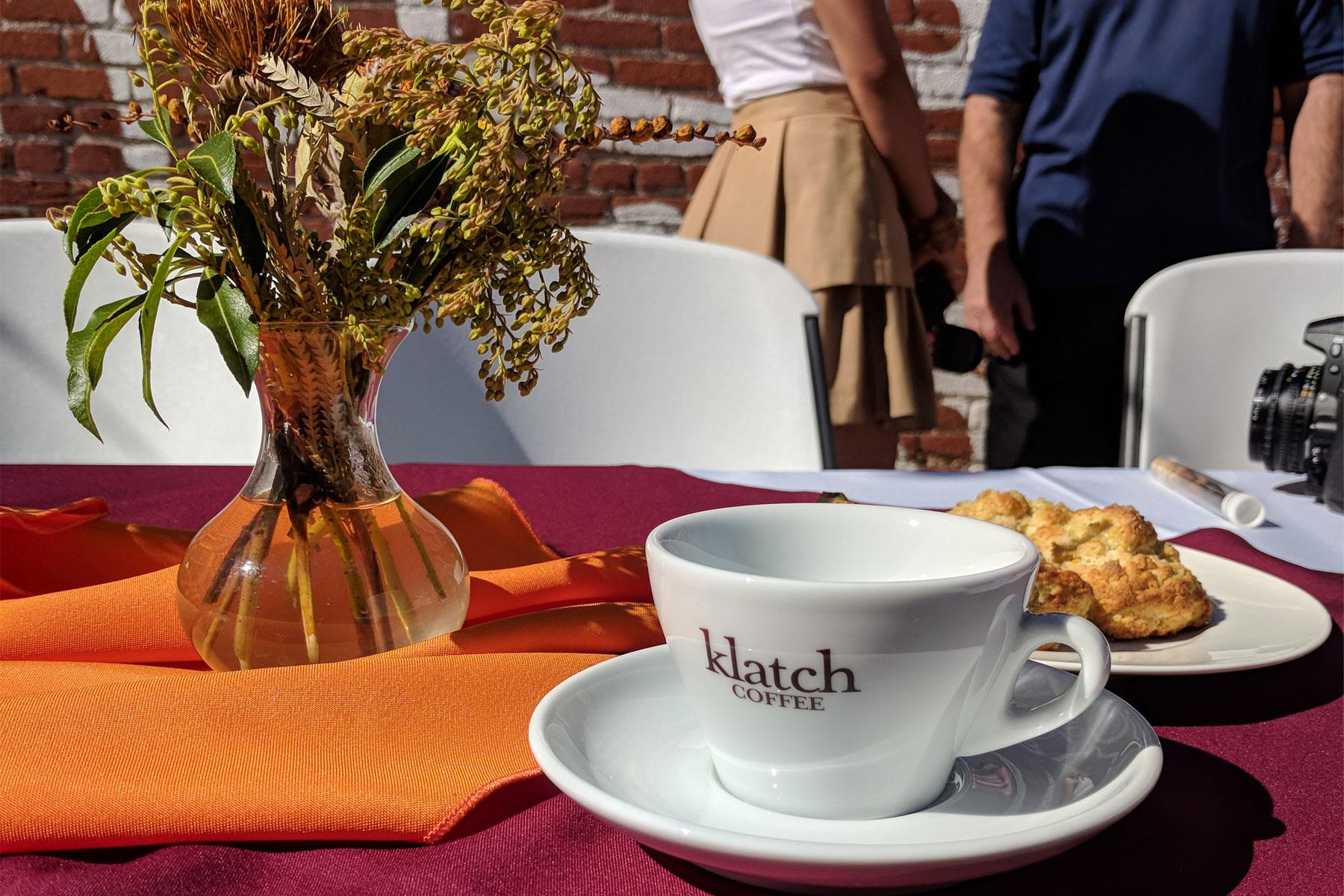 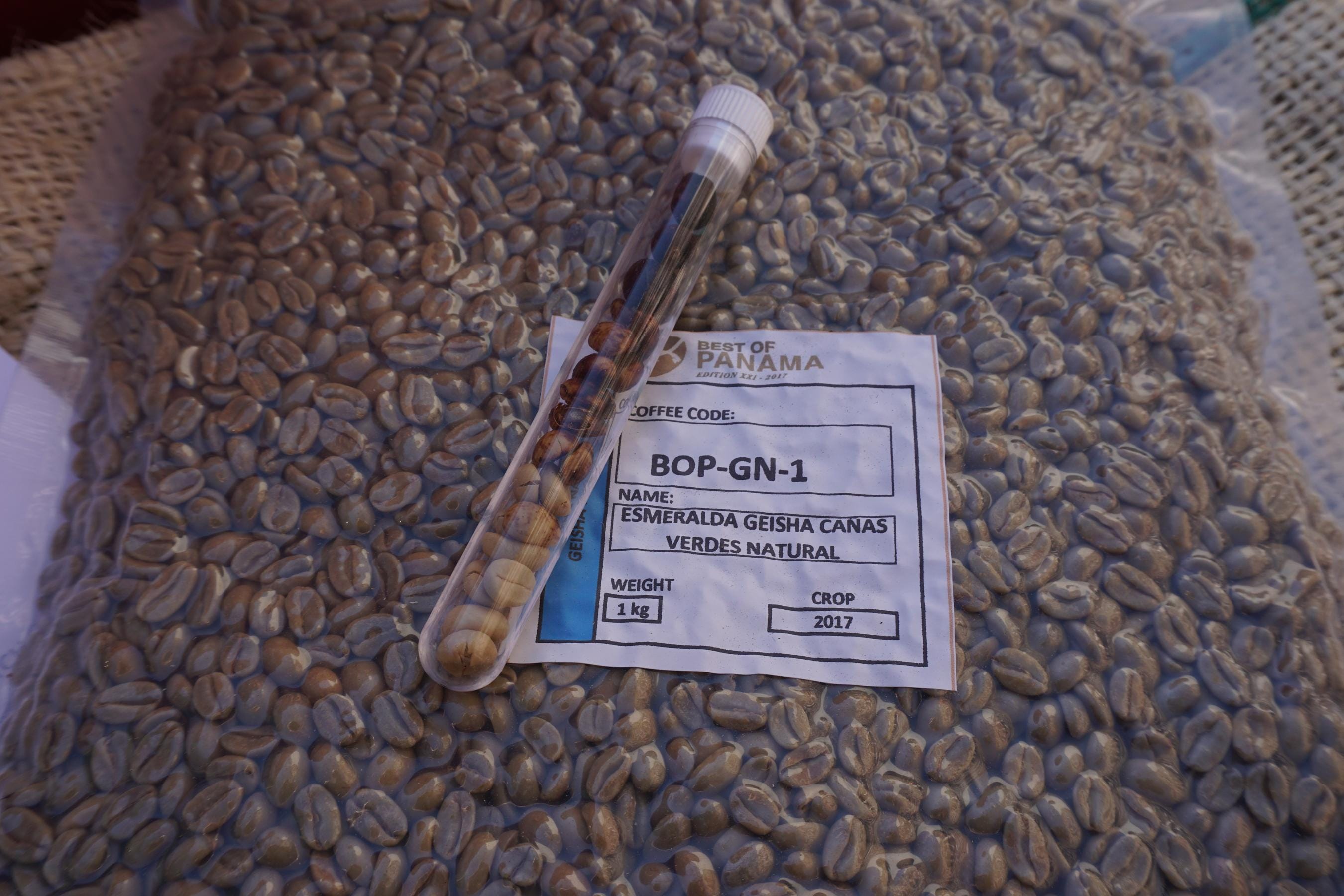 Perry has a flair for the art of suspense. He’s a friendly, animated (he drinks 10 cups of coffee a day), adorably weird dad in long khaki shorts, a polo shirt, and high socks. Once upon a time, he was a chemical engineer until he surprised his family by abruptly leaving the field to pursue coffee full-time. Now, he’s a specialty coffee judge and at the helm of a chain of coffee shops that have won barista, roasting, and brewing championships. He also carries a small spoon around with him wherever he goes for “tasting” coffee in long, loud slurps.

As we wait, we sip our own coffees, black. It has been politely requested that we drink our beverages without milk or sugar by removing both from the building. It’s good, but not amazing. Black coffee isn’t really my thing.

Back in the day, wine with nothing mixed into it used to be gross too. “Nasty, with underlying notes of totally gross,” according to at least one beverage historian. Grape quality varied (sometimes they were even raisins), and resins and other dodgy preservatives were often used. To mask the taste, people mixed it with honey and spices or anything better before wine enthusiasts (likely other scientifically-minded weird dads) devoted their lives to finding out the best varieties and fermentation processes out there. And, over time, those ancient wine snobs helped wine evolve from a drink to a luxury drinking experience that can be sold for the price of a used Prius. We live in coffee’s pre-delicious days, according to Perry and enthusiasts like him, but one day that might change, and future beverage historians will write about the days when people mixed pumpkin spice and mocha into their morning beverage just to get it down.

Today, however, we’ve finally all gathered and Mike Perry is ready to tell us all the story of how Geisha Esmerelda 601 came to lead us out of the coffee darkness, which is a great but long story which I’ll summarize cinematically here:

Open on the United States in the 1990s, when coffee addiction hit the country in a big commercial way. Starbucks stores were doubling in number almost every year, and coffee farms went into overdrive to grow trees with the highest yield possible to meet demand.

And everyone profited happily ever after. That is, until disease struck Panama’s high-yield trees and the cash crop was in trouble.

TLDR: Esmerelda Geisha isn’t just the most expensive coffee in the world, but the most delicious, and the bean that will help showcase the unique flavors of different coffee varietals to the world as farmers look to find other great tasting varietals that demand a high price on the market.

Enter Daniel Peterson, owner of Hacienda La Esmerelda in Panama, who knew of a solution to their problem: Esmerelda Geisha. A bean cinematically named and disease-resistant. He retrieved the beans from a lab in Costa Rica, planted them… and then waited 3 to 4 years, which is how long it takes for coffee trees to mature enough to produce fruit, and also how long it took Daniel Peterson to discover that he was not the hero of this particular story.

As it turns out, though Geisha was disease resistant, disease resistant-trees only produced half the beans of normal trees. “A lot of [farmers] ripped the coffee up,” says Perry. But Peterson, unwilling to give up on his trees, tasted the coffee first and helped shape the definition of what good coffee could be.

He entered those beans in the Best of Panama Auction, one of the most prestigious events in the specialty coffee industry. It not only won that competition, but it went on to keep wining and double in price per pound nearly every year–from $13 per pound in 2003 to 2006 when it “broke the computers at $99.99 (they weren’t designed to compute numbers that large) and rested at $130 per pound.

This year’s crop broke Esmerelda Geisha’s record again when it sold for $601 per pound, after receiving the highest score possible from the 10 international judges (including Mike Perry) who tasted and scored it blind. It was so good that several coffee purveyors decided to split the scant supply–just 100 pounds in existence–so that they could share it with as much of the world as possible.

TLDR: Esmerelda Geisha isn’t just the most expensive coffee in the world, but the most delicious, and the bean that will help showcase the unique flavors of different coffee varietals to the world as farmers look to find other great tasting varietals that demand a high price on the market.

Mike Perry ended up with 5 kilograms (11 pounds). And, after the speech, our taste of the haul is brewed for us by two-time United States Brewer’s Cup champion Todd Goldsworthy. He measures the water with a digital thermometer and pours it carefully over the grounds, where it drips down into something called a chemex dripper. 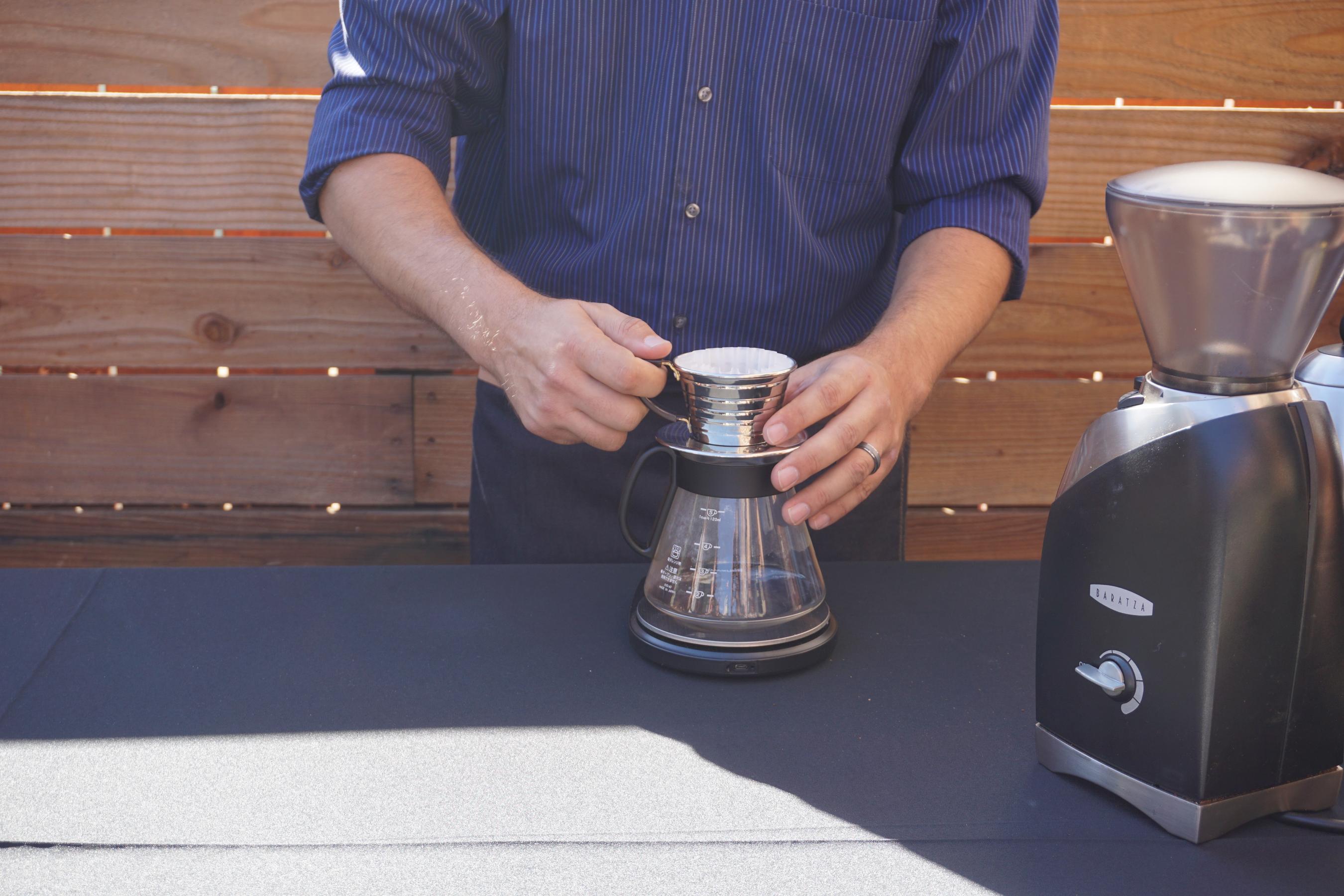 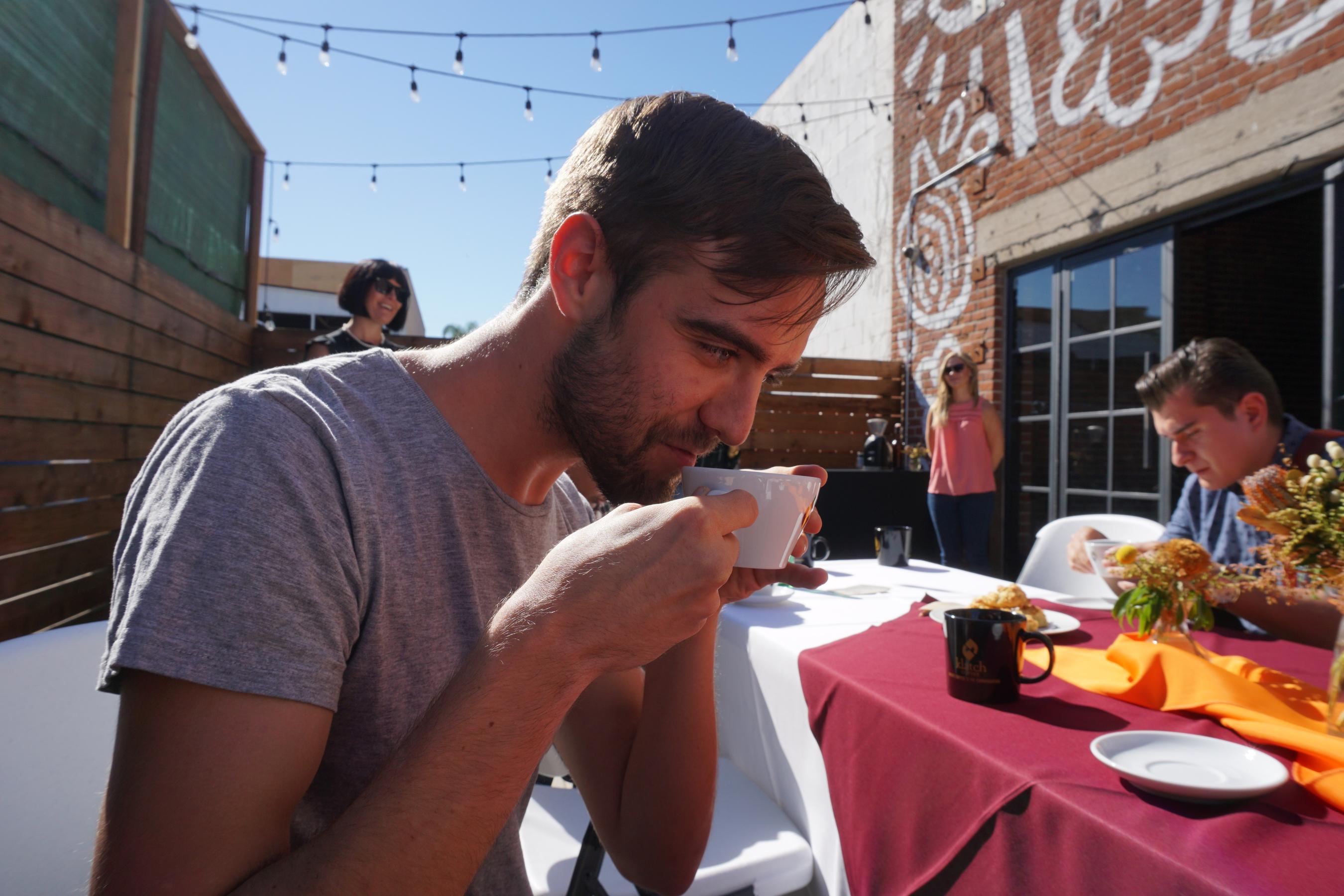 During the ritual, everything is quiet except for the sound of camera shutters. After our cups are poured, we carry them gingerly with both hands back to the table before taking our first sips.

It tastes like honey, followed by fruit, followed by a floral flavor, something close to black tea and then chocolate as it cools. It’s silky and smooth and unlike anything I’ve ever tasted: more like tea than coffee, but better than any example of either beverage that I’ve ever had. I’ve never tasted anything with such complex and delicate flavor, and I thought about it for the rest of the afternoon.

But, I’m no coffee aficionado. I go to the coffee shop on the ground floor of my building because it’s convenient. So I asked an expert–Quintin Valles, barista, writer for Barista Magazine—to share his professional opinion:

“[It tastes like a] sweeter kind of pineapple, like a ripe pineapple. Bergamot. It had the body of a black tea: not as heavy and dense, thinner, but in a good way that helps the fruity splash of the thing just kind of hit your palate…a lot of naturals can be kind of aggressive and fermented, almost rotten. But this one was really good. The pineapple was just really easy on the palate, in the way that a ripe pineapple would be because it still had the tart bright sparks of acidity initially, then a really clean, juicy finish, which was nice.”

Which is kind of like what I said, but better. And now for the most important question: Is it worth the price?

“Maybe if I had $600 to throw around? It would be fun and I could throw a similar thing at my own house. Definitely, I think, just as an experience, it’s worth it. You know, I can say that I’ve had this coffee, which is rightfully an expensive coffee because it’s really, really tasty. Really unique and complex, and really, really enjoyable.”

So, there you have it. A yes from a coffee expert.

And, as someone who prefers a good craft beer over a Miller Light, and stopped ordering “house red” at least a year ago, a “yes” from me, too. I’d recommend it to anyone who’s a fan of unique flavor and finding out what coffee can be. And you can drop, “I’ve tasted the world’s most expensive coffee” into conversation any time you see someone holding a cup.

Someone, after they’re finished with their cup, sits back and says, “I totally didn’t expect that.” Perry smiles, genuinely excited, and says that that’s why he went through all of the trouble to bring it here.

If you’d like to try the world’s best coffee for yourself, it’s available at Klatch Roasting in a series of tastings that begin on November 18, 2017 and start at $55 per ticket for one cup of Esmerelda Geisha 601 per ticket (and a few extras). You can buy your tickets here.