Beaches Kaila Yu Do You Enjoy Visiting Hawaii? You Should Pay a Fee
Home  >  News   >   Top 10 Reasons to Visit Poland

If you’ve exhausted the manifold charms of France and Italy and are searching for a new place to call your second home, Poland is the place. Encompassing majestic mountain ranges, stunning lakes and rivers, vivid history, and major urban centers like Warsaw and Kraków, Poland, as the saying goes, has something for everyone. There are plenty of reasons to book a flight, including the 10 below. 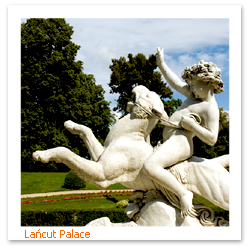 This spectacular neo-Baroque palace, set within a 76-acre park, is one of the grandest aristocratic residences in Eastern Europe. In the 19th century it was willed to the Potocki family, who amassed an impressive art collection here. Count Alfred Potocki, the last owner, emigrated to Liechtenstein in 1944, escaping with 11 train cars full of art objects and paintings. Much, however, was left behind. Today you can see the family collection of art and interior decorations, including Biedermeier, neoclassical, and rococo furnishings. A sculpture garden includes works by Canova, and there’s an impressive collection of vintage carriages. ul. Zamkowa 1, Lańcut. www.zamek-lańcut.pl.

Palace of Culture and Science, Warsaw
The palace is a massive Stalinist-Gothic structure — the tallest building in Poland, and for many years one of the biggest in Europe. It was built in the early 1950s and was called the Joseph Stalin Palace of Culture and Science. The name was changed, however, following the dictator’s death. The old joke runs that this is Warsaw’s best view because it is the only place from which you can’t see the palace (from the 30th floor you can get a stunning panoramic view of the city). Today, the building encompasses bookstores, theaters, cinemas, and offices. Many celebrities have made guest appearances here, including the Rolling Stones, who performed here in 1967. 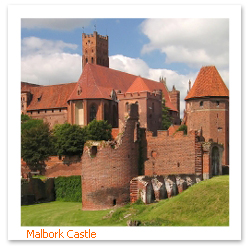 One of the most impressive strongholds of the Middle Ages, Malbork Castle is the quiet town of Malbork’s main attraction. In 1230, the Teutonic Knights arrived on the banks of the Vistula River and settled here. The castle passed into Polish hands in 1466. For the next three centuries, Malbork served as the royal residence for Polish kings during their annual visit to Pomerania. The imposing castle — it’s among the largest brick structures in Europe — was partially destroyed during World War II, after which it underwent major renovation. Guided tours are available in English. You can easily see the castle on a day trip from Gdansk, but there is a hotel on the castle grounds. The castle is 28 miles southeast of Gdansk, on Route 50. www.zamek.malbork.pl.

Sprawling baroque Wilanów Palace was built between 1681 and 1696 by King Jan III Sobieski. After his death, the palace passed through various hands before it was bought at the end of the 18th century by Stanislaw Kostka Potocki, who amassed a major art collection here and opened the first public museum in 1805. The palace interiors still hold much of the original furniture in addition to a vast art collection that includes paintings, porcelain, books, manuscripts, and drawings. Perhaps the most stunning feature of Wilanów, though, are the grounds, which include a formal garden, a lake, and a lovely stream surrounded by a verdant forest. Wilanów remains one of Warsaw’s most beautiful attractions.

If you like water and water sports, the Mazury Lake District is definitely the place to go. This is one of the most popular holiday regions of Poland, particularly favored by those who like sailing and kayaking. The region encompasses 2,700 large lakes, and countless little “lakelets,” connected by a network of rivers, streams, and canals, which splash, spill, and spread through the region’s meadows and marshlands. The jewel of the region is the 656 square-mile area called the Mazurian Great Lakes; nearly a third of this area is covered by water. The “great lakes” include two of Poland’s largest (Śniardwy and Mamry) as well as the popular resort of Mikolajki. 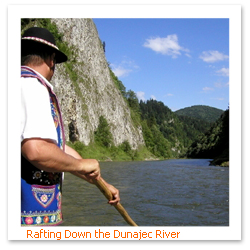 The region of southern Poland that includes the Pieniny mountains and Czorsztyn Lake is one of the most picturesque corners in Central Europe. The winding Dunajec River gorge cuts through Pieniny National Park, creating dramatic scenery. To the west of Pieniny is man-made Czorsztyn Lake, created from the dammed waters of the Dunajec River. Overlooking the lake are two famous castles that once stood on the river’s banks. The village of Kroscienko is a good base for mountain-hiking. The spa town of Szczawnica is an excellent point of departure for smooth-water rafting trips from Sromowce Wyzne-Kąty through the Dunajec Gorge.

At 42 square miles, this is one of the smallest national parks in Poland, but it’s also one of the most splendid. The area is mostly covered by a mixed forest overgrowing green hills, with steep cliffs overlooking the Baltic sea to the north. There are two breathtaking viewpoints: Kawcza Góra, which is 195 feet above sea level, and Wzgórze Gosań, which is 305 feet above sea level. The park offers protection to an enormous number of rare plants, including 16 kinds of orchids. Among various rare animals and birds in the park are sea-eagles and bison.

Between 1940 and 1945 more than 1.5 million people died here in the Nazis’ largest death-camp complex. Auschwitz has come to be seen as the epicenter of the moral collapse of the West, and that’s certainly the impression most people walk away with. The most provocative exhibits are the huge piles of belongings confiscated from victims, as well as the two tons of human hair intended for use in the German textile industry. Equally grim are the gas chambers at nearby Brzezinka (Birkenau), where thousands of Poles, Jews, gypsies, and homosexuals lost their lives. The execution wall, the prison block, and the reconstructed crematorium at the end of the tour are a sobering reminder of man’s inhumanity to man. www. auschwitz-museum.oswiecim.pl. 38 miles west of Kraków. 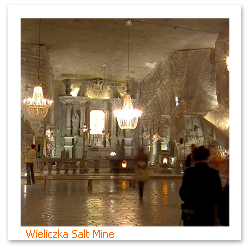 Visiting the 700-year-old mines of Wieliczka is a good way to spend half a day. The salty underground labyrinth stretches and meanders for hundreds of miles. Old maps show 26 shafts starting at the surface, and more than 180 smaller underground shafts joining two or more neighboring levels. The mines have at least nine levels, and more than 2,000 chambers where excavation has now been abandoned. The underground itinerary takes you to several chapels that have been carved from the salt; huge, fantastically shaped multilevel chambers; and salty subterranean lakes that send off fantasmagorical reflections of light. Look for the 17th-century with the saints’ expressions softened with the moisture coming through the shaft. Danilowicza 10, Wieliczka. www.kopalnia.pl.

Europe’s largest medieval marketplace is on a par in size and grandeur with St. Mark’s Square in Venice. A pageant of history has passed through this square. From 1320 on, Polish kings came here on the day after their coronation to meet the city’s burghers and receive homage and tribute in the name of all the town’s of Poland. The square is surrounded by illustrious historic buildings.