This is what 10,000 years of human ingenuity looks like.

Even the best historians can’t make history come alive quite like the experience of standing before a historical site in person. Knowing your footprints might be aligning with those of ancient cultures has a way of putting things in perspective that no textbook could ever convey. From the scent of the wet earth after a New Mexican summer storm in ancient pueblo to the feel of the cold limestone walls that line the interior of Egypt’s oldest pyramid, these man-made structures have stood the test of time and are still worth visiting today. 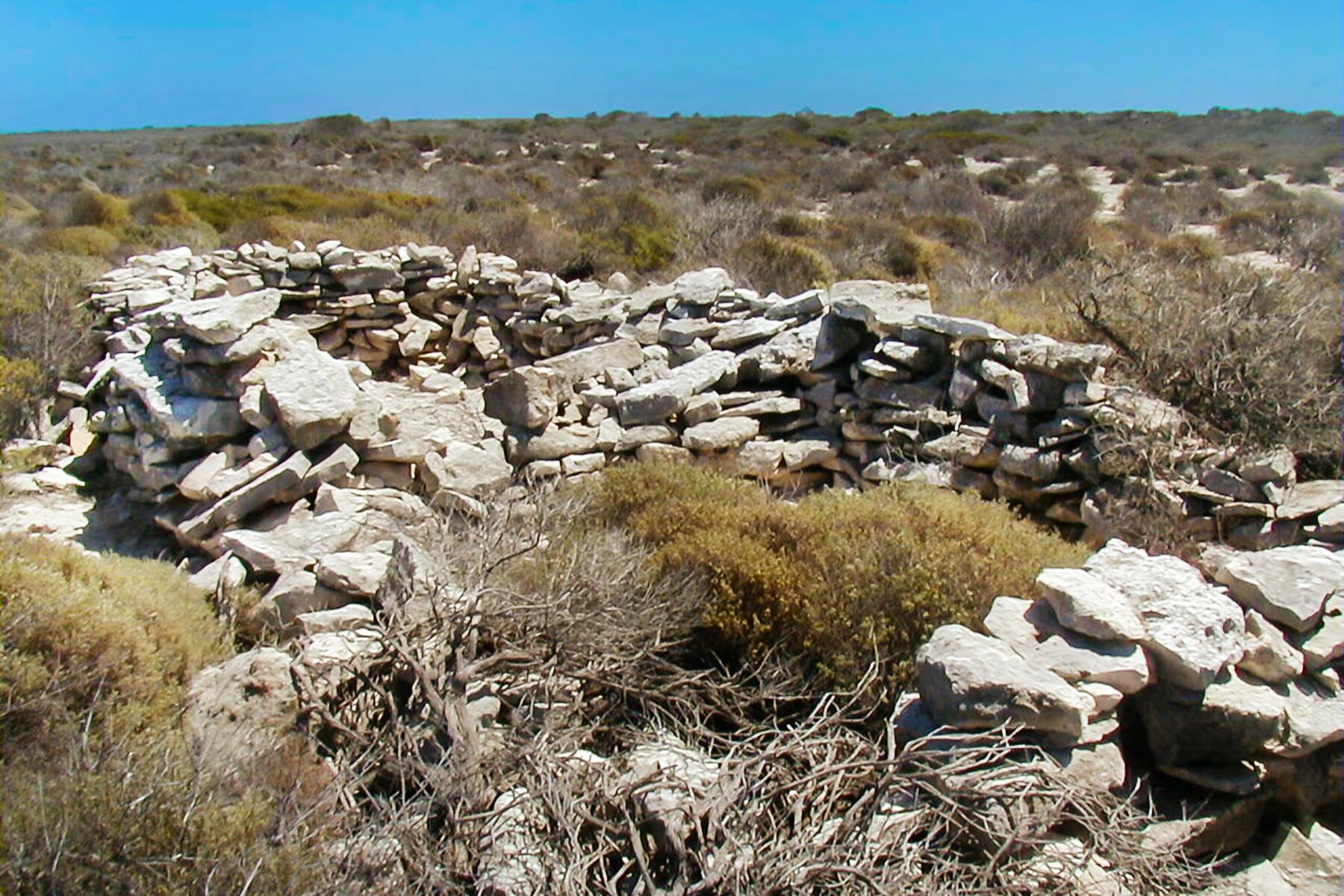 A small stack of limestone and coral blocks on West Wallabi Island is all that remains of the oldest structure in Australia (1629 AD), but behind each stone lies a dark tale of mutiny, murder, and one hapless shipwreck that began it all. Visitors can learn about the wreck and the battles that followed on West Wallabi Island at the Museum of Geraldton or charter a boat to check out the fort itself just off the west coast of mainland Australia. 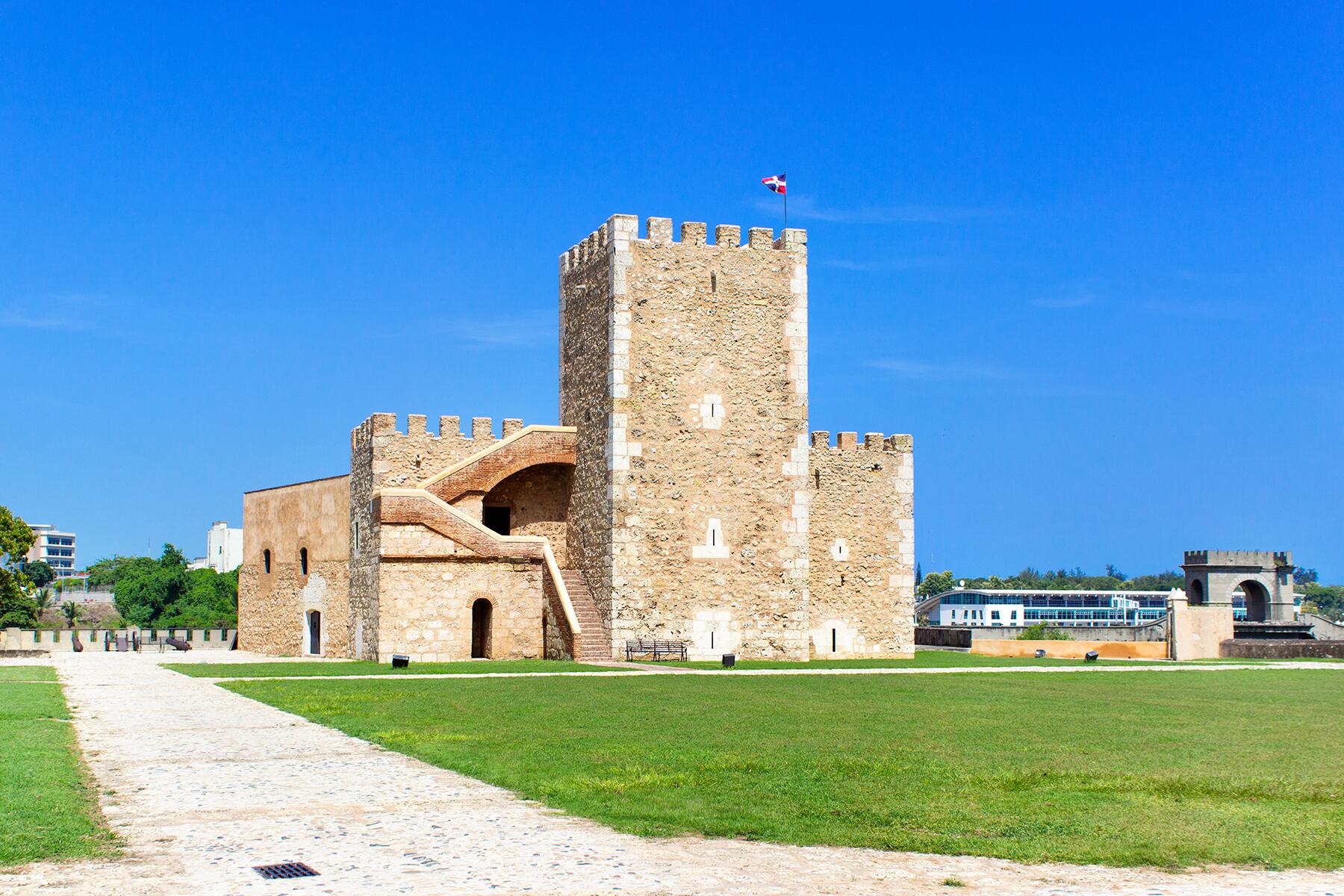 Christopher Columbus was once held as a prisoner at this 16th-century fort, and today visitors can venture deep into the chambers, dungeons, and tunnels that have stood in place since the fort’s inception. The first stone was set for Fortalez Ozama in 1502 AD, but this Spanish castle-esque fortification wasn’t completed until six years later, making it the first permanent military structure in the Americas 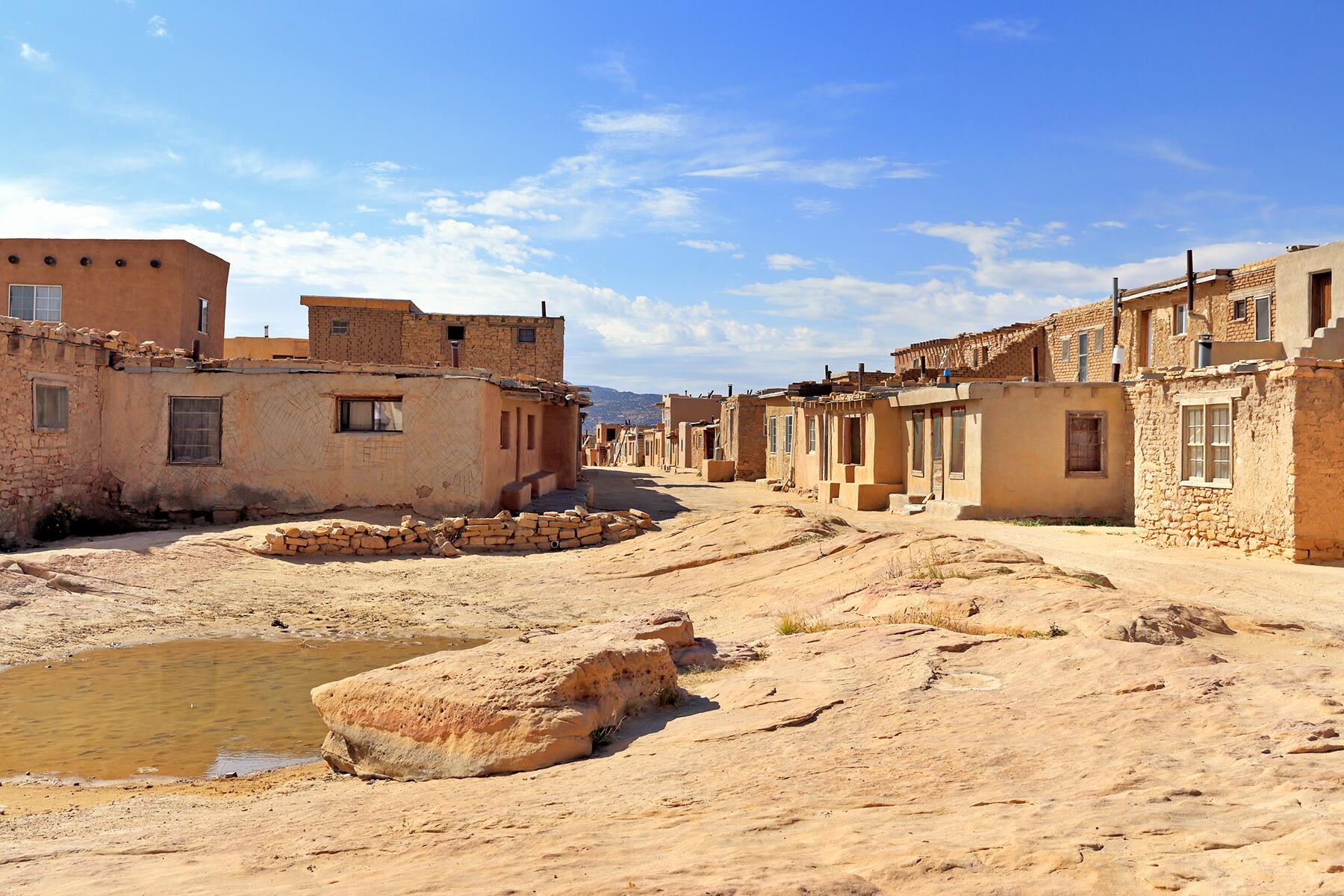 Recent excavations suggest that this historic pueblo could have been inhabited even earlier than the date that currently earned the Acoma Pueblo a designation as the oldest continuously inhabited community in the United States (1150 AD). Today nearly 50 Acoma tribe members continue to reside in “Sky City”—a name given to the site due to its perch on top of a 367-foot mesa—without running water, electricity, or cell service, which makes it a bit easier for visitors to catch a glimpse of what life could have been like for the tribes’ ancestors. 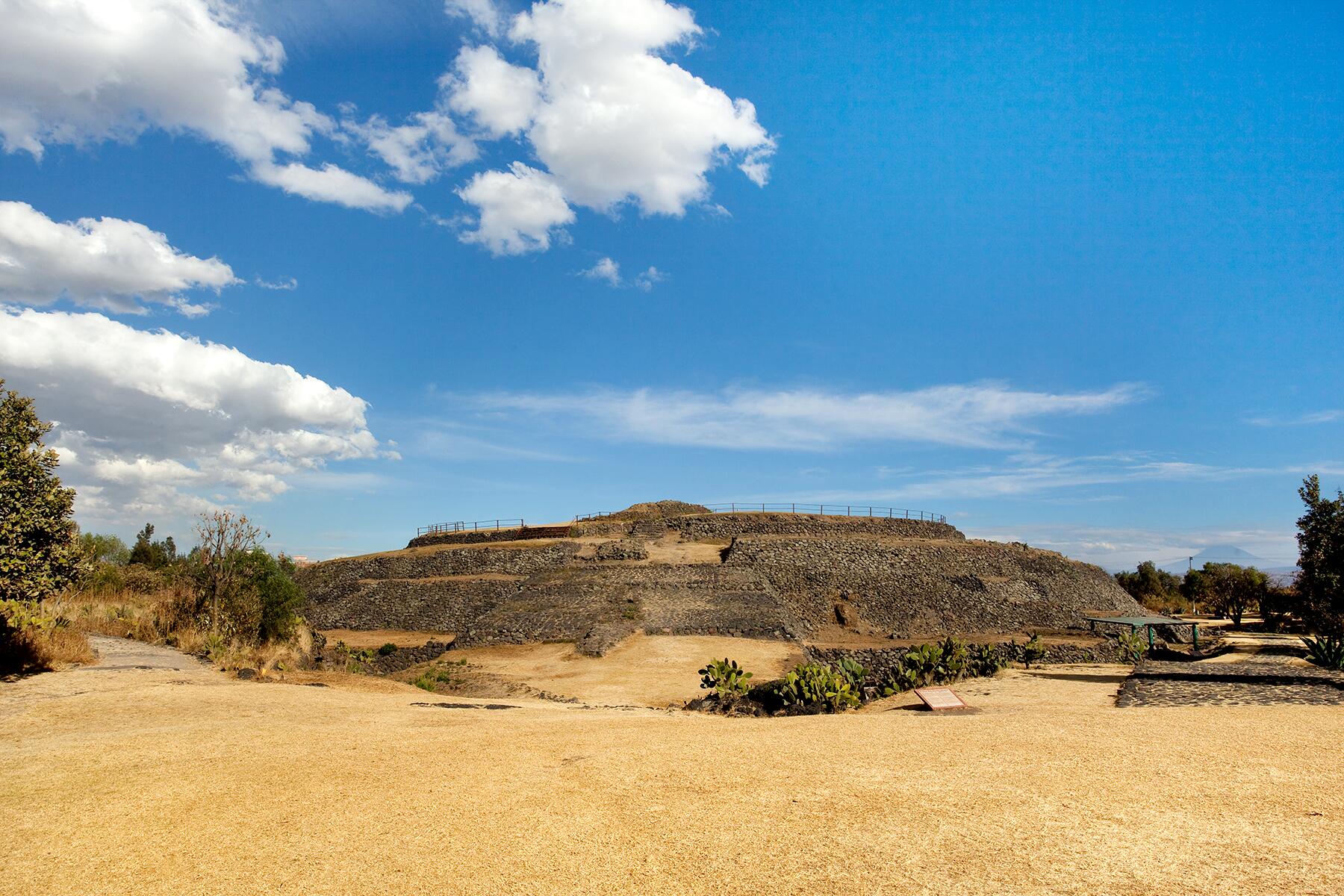 The earth has begun to slowly reclaim this ancient ceremonial center, where green grass and flowering weeds peek between the round stones and moss-covered lava blocks of this circular temple just outside of Mexico City’s city center. Named after the Nahuatl word meaning “place of songs,” the Cuicuilco Pyramid dates back to 2000 BC and it is widely believed that the sun’s movements were first recorded here, indicating the initial research for creating the first calendar. 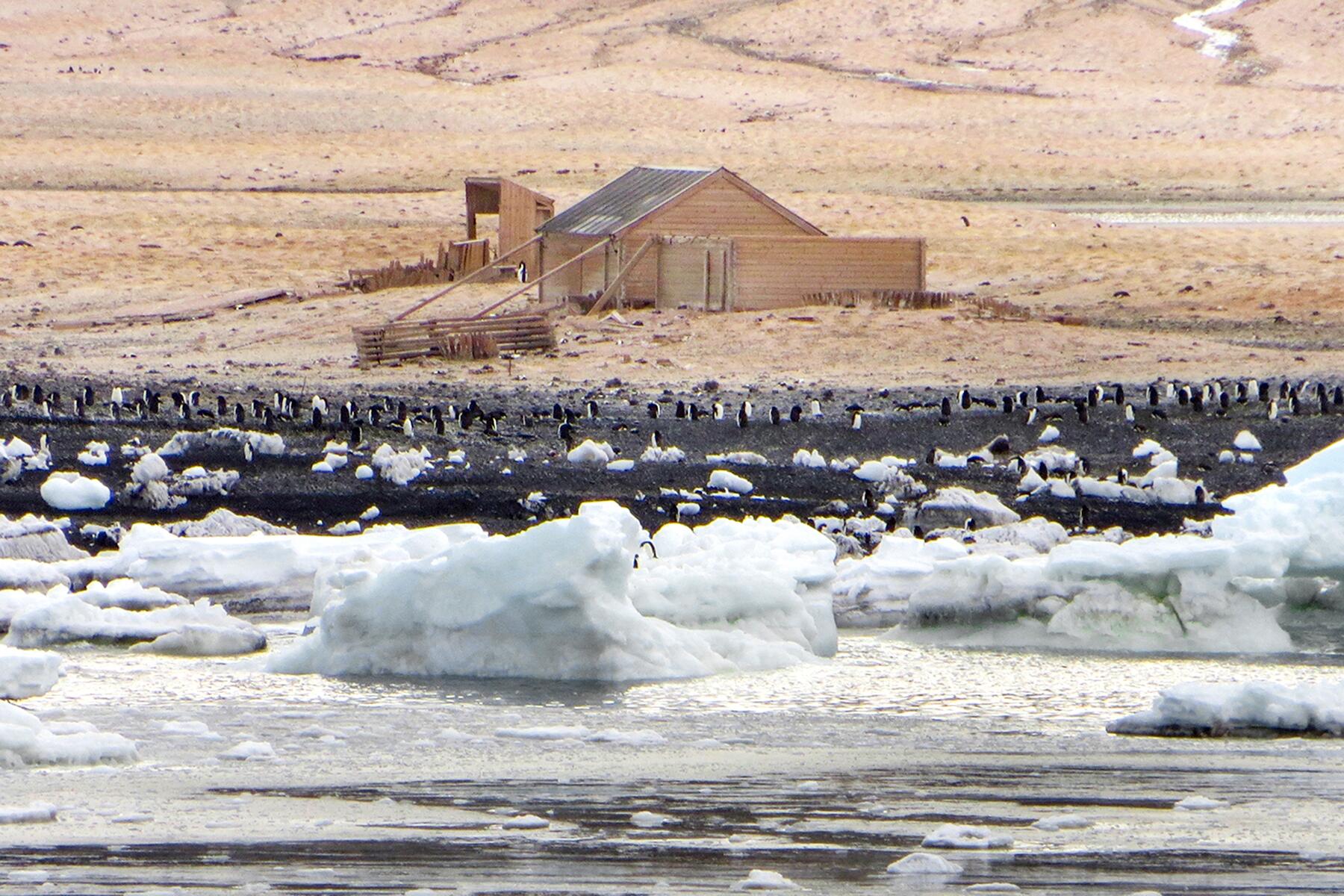 The conditions need to be near perfect to attempt a landing at Cape Adare—one of the most inhospitable landing sites in all of Antarctica due to its notoriously heavy surf and strong offshore winds—which is why it is so impressive that Norwegian Commander Carsten Borchgrevink did so twice. It was during his second time at Cape Adare in 1899 that he set up two huts (Antarctica’s first buildings ever) for him and his men to be the first expedition to overnight on Antarctica. The original huts are still intact today, where fortunate cruise passengers can peek inside to see the items left behind, like a pair of socks from a penguin biologist that were set out to dry and tins of Wiltshire bacon. 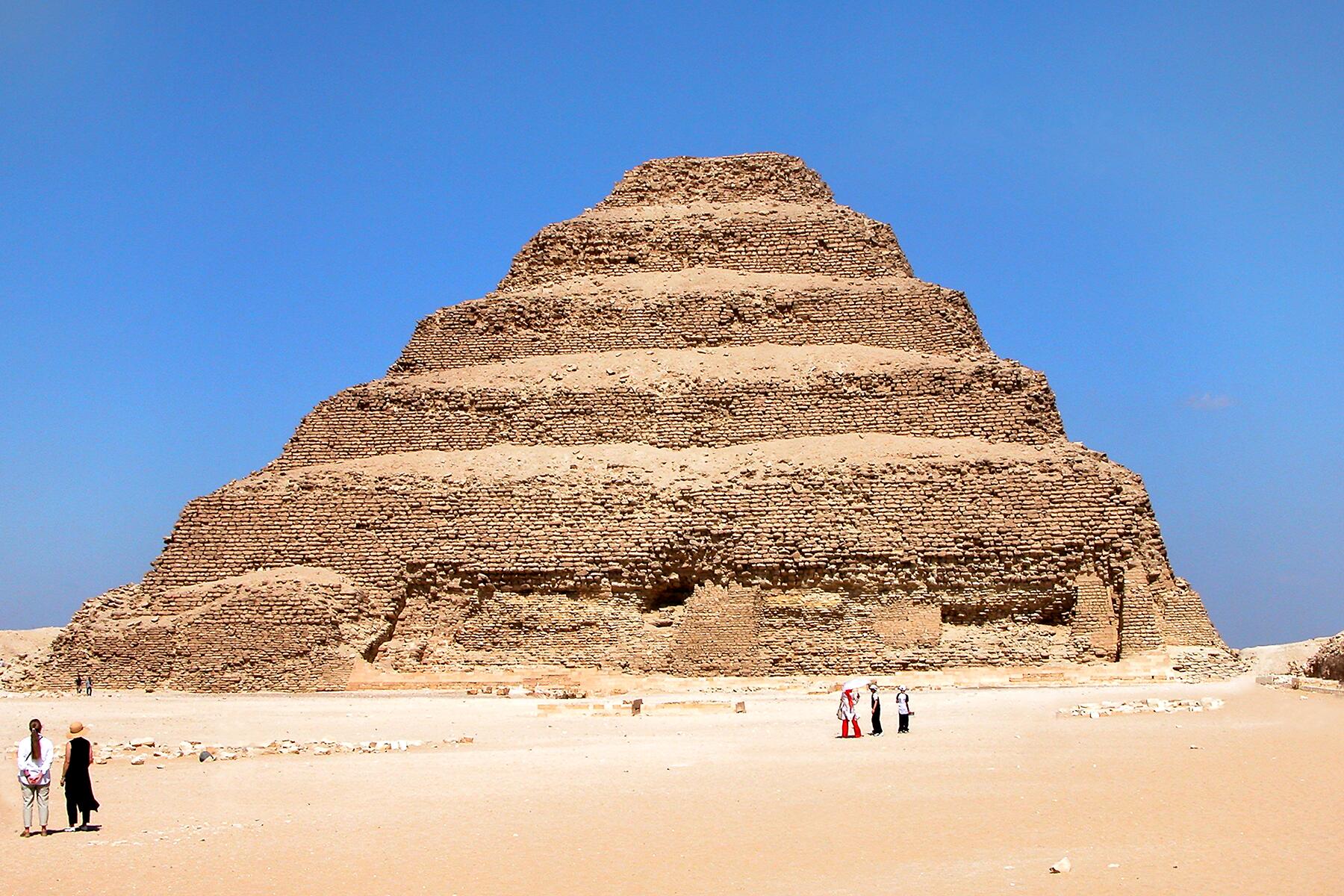 This ancient pyramid predates the Great Pyramid of Giza by several hundred years and is the world’s oldest still-standing stone building. It is believed that this step pyramid was built sometime between 2667 and 2648 BC for the pharaoh Djoser who ruled during Egypt’s third dynasty. The Pyramid of Djoser’s six layers were carefully restored over 14 years, and only recently reopened to the public for visitors to explore the more than three miles of false doorways, dead ends, and ancient chambers inside the pyramid. 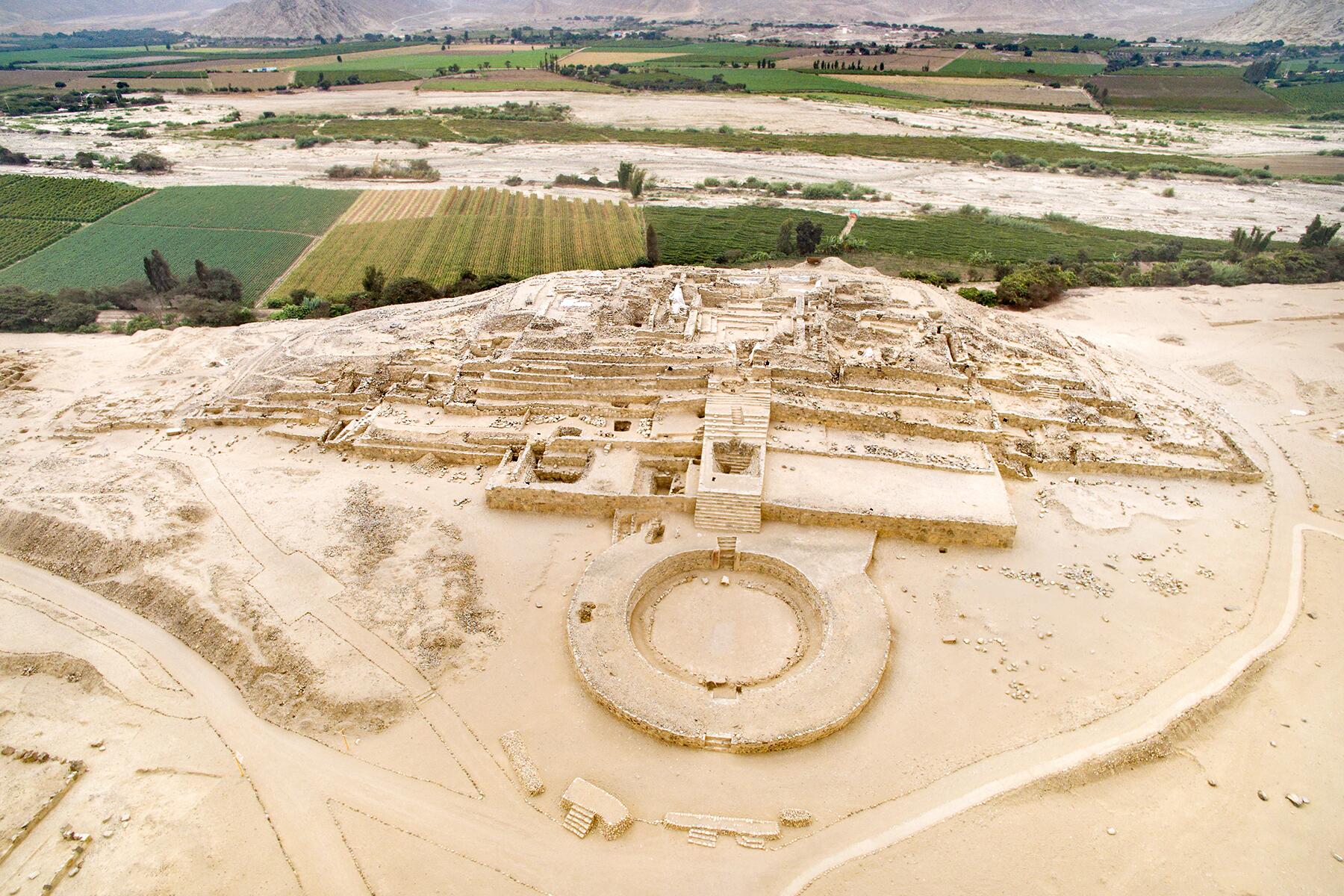 Archaeologists believe that this 150-acre plot of pyramids, plazas, and homes was thriving around the same time the Egyptians were doing the same in Giza. A reed carrying bag found on the site dated back to the Late Archaic period beginning in 3000 BC, making Caral the oldest civilization in the Americas, and one of the oldest in the world. The site overlooks the Supe River, which dictates how easily accessible it is to reach this sacred city depending on Peru’s dry or wet season.

Insider Tip Arrive between mid-May and mid-November so you can take the short cut across the dry riverbed. 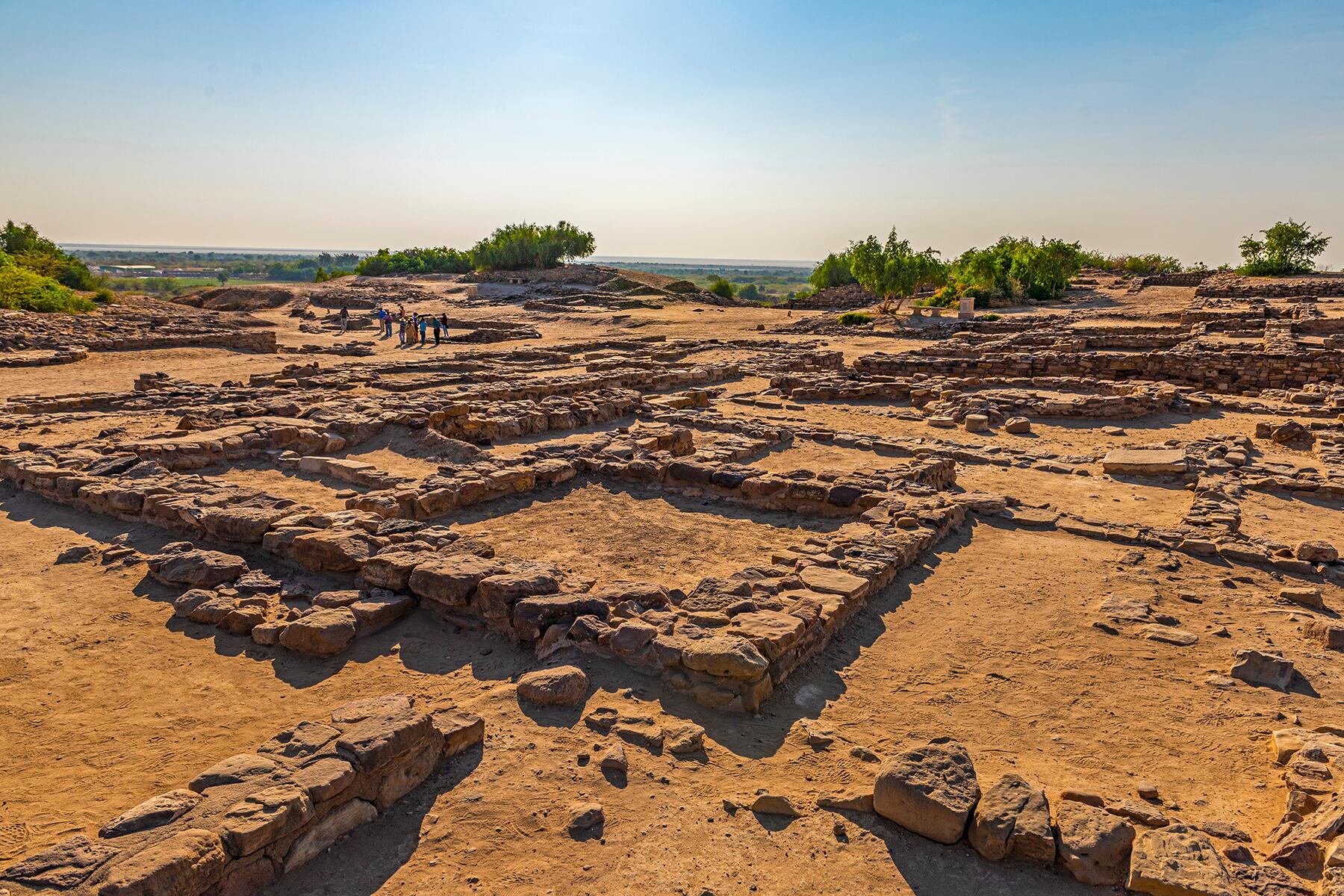 The Harrapan city of Dholavira was rediscovered in 1956, but most experts agree the ancient city was occupied from 2650 BC to 1450 BC. The city is located on Khadir Bet, a small island isolated from civilization by the salt plains of Rann of Kachchh. The sophisticated drainage systems, strong fortifications, and grid-like streets lead many to believe it is one of the first examples of city ancient planning. The nearest city is Bhuj, where visitors can either book on a six-and-a-half-hour bus trip or rent a car to drive the 250 kilometers to explore the ruins in person. 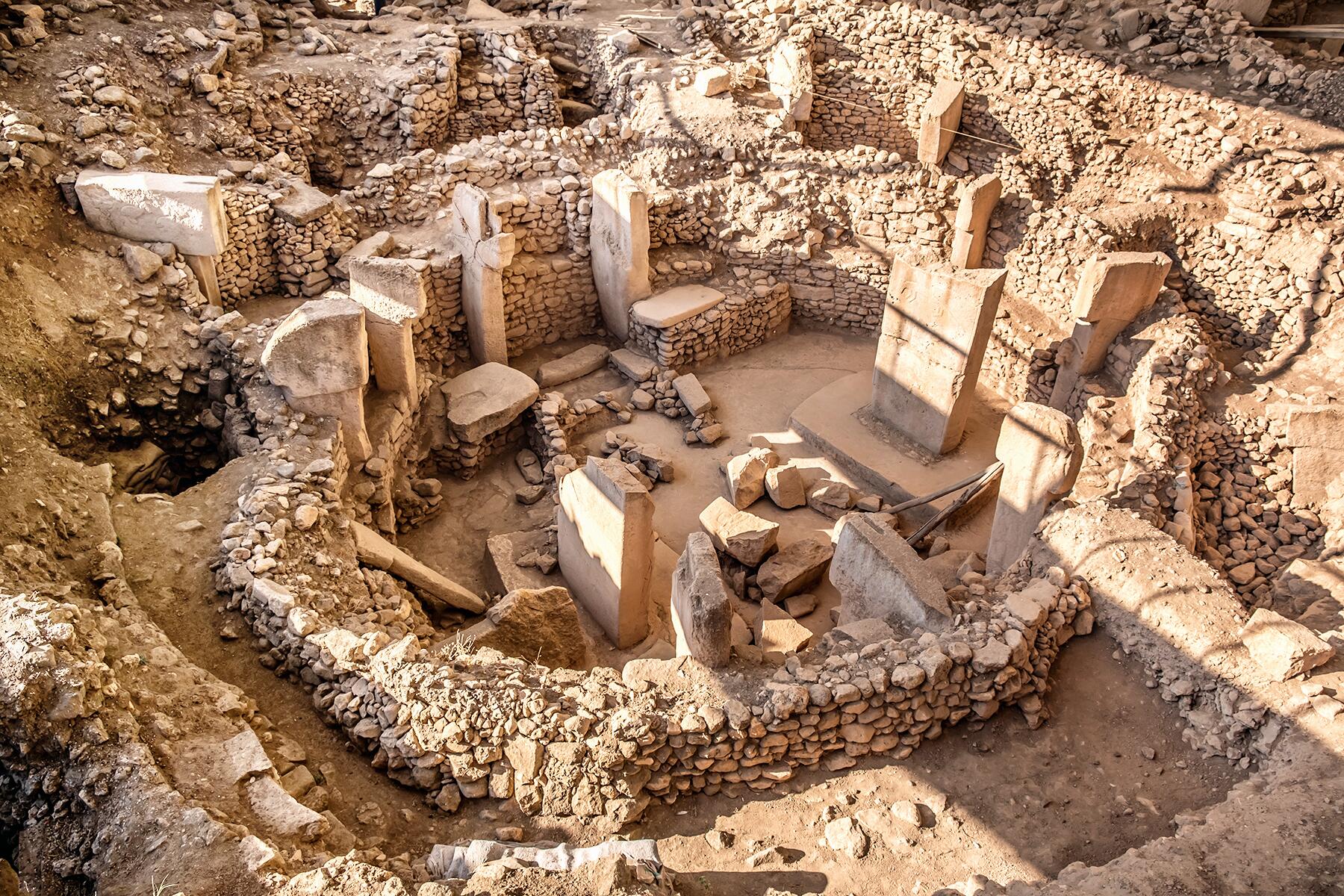 Believed to be the world’s very first man-made temple, Göbekli Tepe was dismissed as a medieval cemetery when it was first unearthed in the ’60s. It wasn’t until 1994, when German archaeologist Klaus Schmidt first visited the stones in south-eastern Anatoli, that the site was examined and dated back to 9500 BC, a time that predates pottery or metal tools. The site sits at the tip of the Fertile Crescent in Turkey, where these mammoth stones with intricate carvings stand proudly as a marvel of mankind’s ingenuity. 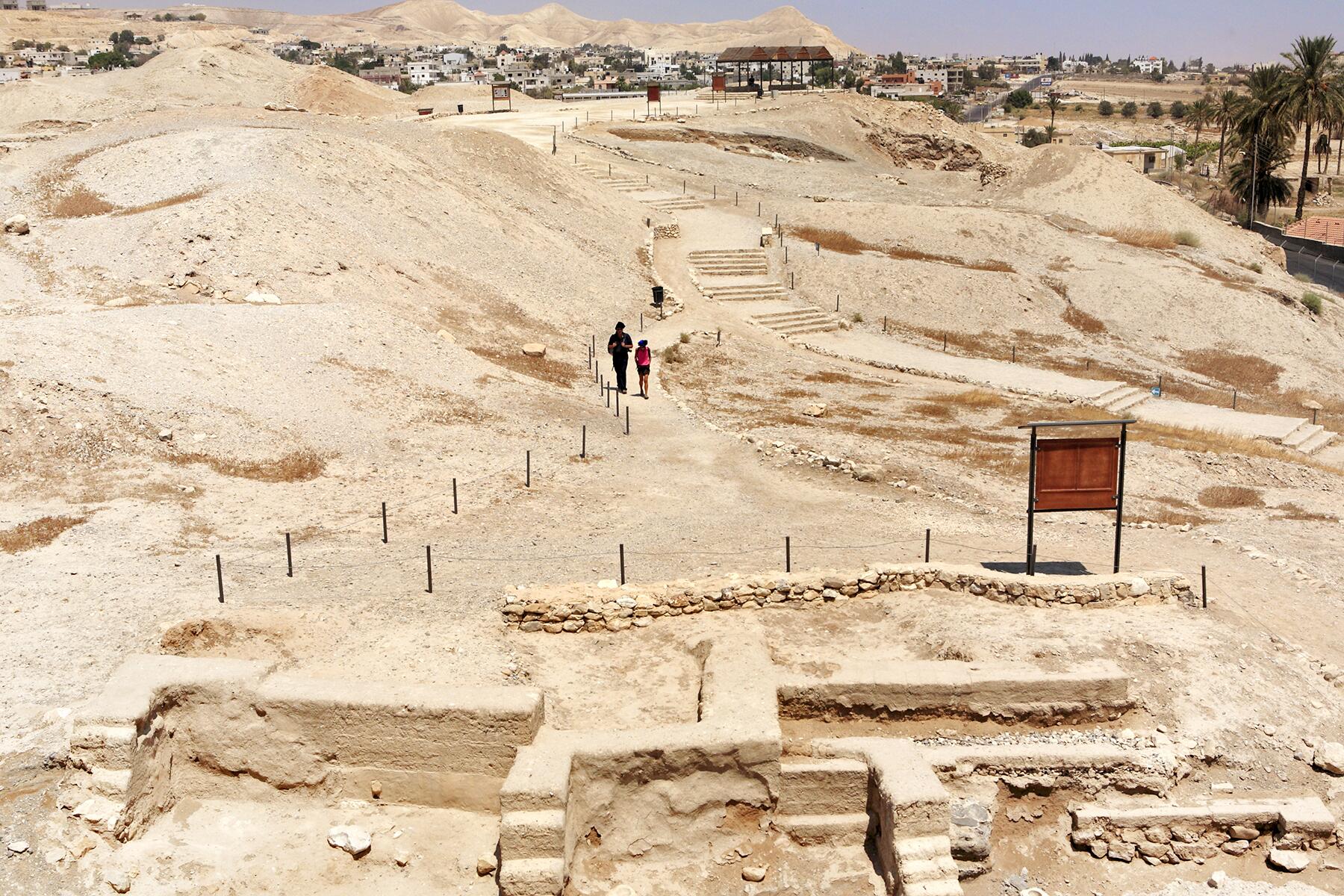 Located in the plain of the Jordan Valley of Palestine, Tel es-Sultan (or Tel-Jericho) is home to both the lowest and longest continuously inhabited city in the world. Remains from the old walled city date this site back to 9000 BC, and today visitors can tour the ruins by foot or rent a bike for a two-wheeled tour through the modern-day city of Jericho.

I know you don't care much about history but Christopher Columbus was never held prisioner in Fortaleza Ozama (No. 2) .  It's date of construction started on 1502, yet Columbus was imprisioned in 1500.

The reason for the confusion is because there was another fort he and his brother were imprisioned in 1500, but that was on the east side of the river.  After a major hurricane tore through the city Nicolas de Ovando had it rebuilt on the west side of the river where the fort is presently located.  Nevertheless, the views are spectacular at the top of the tower and witness that "tale of two cities".

All these places you mention pale in comparison to the official oldest free standing temple still in existence. This is the Temple of Mnajdra, in the small island of Malta. This dates back to circa 5000yrs BC, predating the pyramids of Egypt by around 1000years.This tiny island has an incredible amount of similar temples all over the island, which till today, no one knows exactly what type of civilisation constructed them. They include massive, 10 tonne stones which were placed upright next to each other. Other similar structures can exactly predict the Sumner and Winter solstice. They deserve an article all on their own.

Tel -es-Sultan cannot rationaly be located in Palestine, since Palestine does not exist.  In their peace treaty, Jordan ceded the West Bank to Israel, with the understanding that part of it would be used for nation for the Jordanian Arab citizens who were living there. But there was no mention of what part or how this would be accomplished.  Since 1967 those same Arabs have repeatedly shown that they will accept NO treaty with Israel which does not include the dissolution of Israel. That is demonstrated in their motto, "From the river to the sea ..."  There hasn't been one single leader among the Arabs on the West Bank who have honestly been willing to accept a two-state solution; this is why Yasser Arafat scuttled the 2000 peace talks in which he was offered 99.95% of what he had SAID he was seeking.Moreover, when Israel DID give Gaza back to the Arabs, they used no resources in trying to build a nation. Instead, their entire efforts have been spent in attacking Israel with terrorist tunnels, fire balloons, rockets, and mortars.  It is the behavior of Arabs as discussed here which has finally led Israel to conclude there will never be a real peace with them, and so forced Israel to conclude to move unilaterally to satisfy its own security needs and the historical lands of the Jewish people.

There is no Palestine.