From top experiences to on-the-ground advice, here’s your guide to visiting the West Bank for the first time.

Sandwiched between Jordan and Israel, the Palestinian West Bank encompasses 2,173 square miles of diverse landscapes, ancient landmarks, and deeply-storied cultures. Despite this, most information about Palestine that reaches U.S. ears focuses on ongoing political strife and eruptions of violence rooted in a complex history of immigration, refugee resettlement, and war. And that just covers the last century. As the people and governments of Israel and Palestine struggle to resolve their conflict, the territories remain in flux and deeply affected by external events, including U.S. policy. Due to continued violence, instability, and political agendas, Hamas-controlled Gaza is off-limits to tourists. Though the West Bank remains relatively tranquil, political moves—such as the uprooting of olive groves or attempts to annex settlements—can trigger localized protests and clashes.

Although the numbers of evangelical Christian tourists (many hailing from the U.S.) in Palestine are on the rise in recent years, relatively few Americans view the region as a prime vacation destination. However, the West Bank wants to change that. The territory, governed to varying degrees by both Israel and the Palestinian Authority, welcomes visitors and has built a community-based tourism infrastructure that supports those willing to venture beyond the pilgrim buses and the headlines. 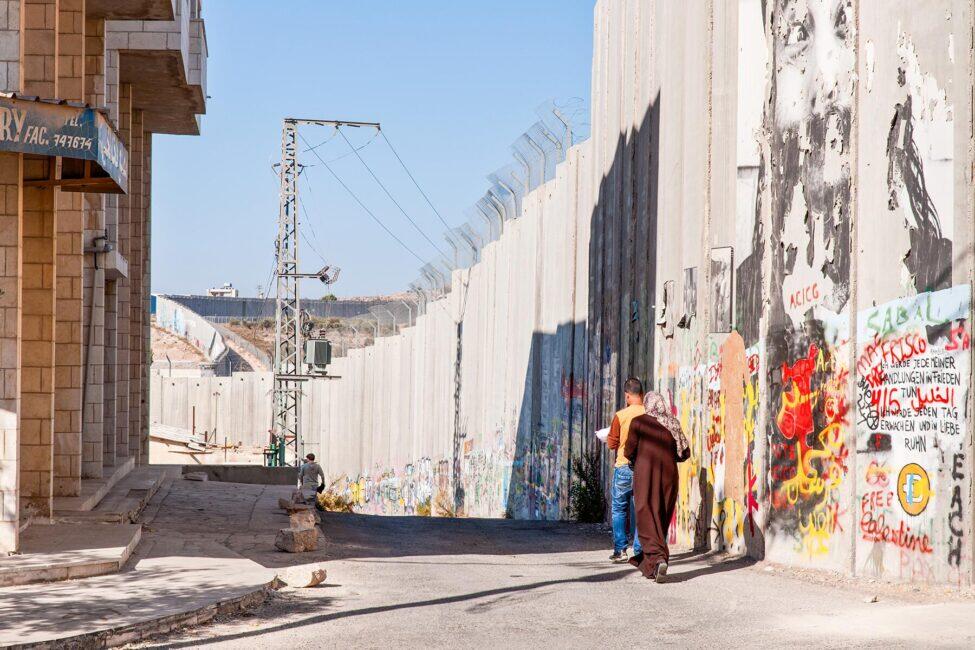 Bethlehem Beyond the Bus

Bethlehem is home to some of the West Bank’s most famous religious sites, including the Church of the Nativity, a basilica originally built in 339 CE on the site Christianity claims as the birthplace of Jesus Christ. But, to get a feel for modern life, it’s necessary to explore beyond the religious sites. The 30-foot tall separation wall between Bethlehem from Israel is adorned with murals and quotes from artists all over the world, including Banksy. The art reflects on politics, war, and life under occupation, and although there are some nearby businesses renting stencils and spray paint, try to resist the urge to add your own touch. Instead, join graffiti artist Moodi Abdalla—find him at Shop Behind the Wall on Hebron Street—for a walking tour and an insider’s perspective. 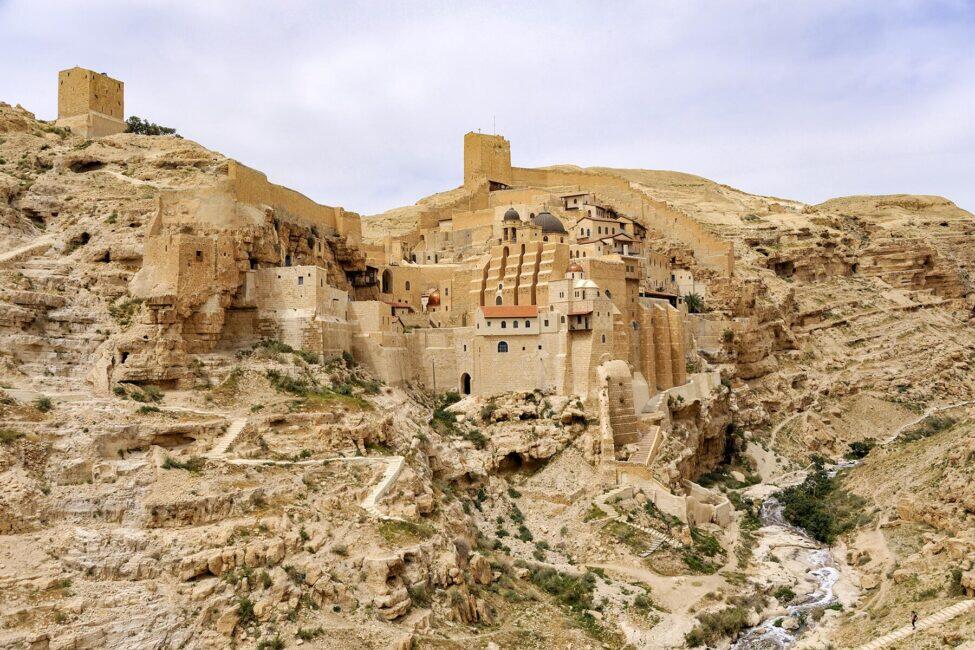 Winding 205 miles from Rummana in the north to Beit Mirsim in the south, the Masar Ibrahim al-Khalil loosely follows the footsteps of Abraham and connects more than 50 cities and villages throughout the West Bank. The trail passes shepherds, picnicking families, Roman ruins, and fields strewn with wildflowers and zatar as it meanders from Samia Spring to Al-‘Auja Spring. En route to the Mar Saba Monastery, the path climbs through the parched sands of the Jerusalem Desert. The trail can be hiked in segments or its entirety, with nights spent in hotels or Bedouin camps along the way. Though it is signaled by cairns and painted rocks, travel with a guide for more opportunities to interact with locals. 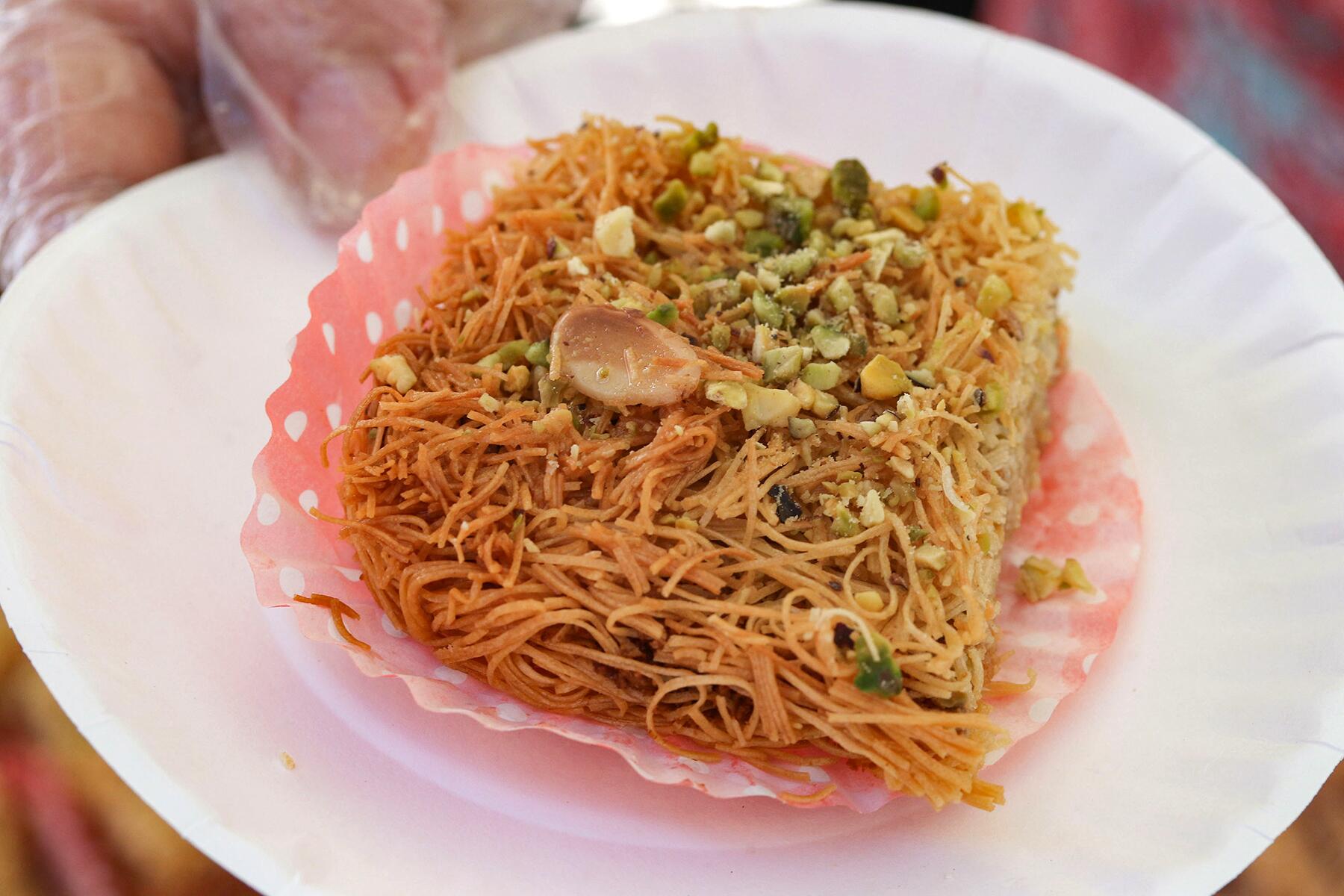 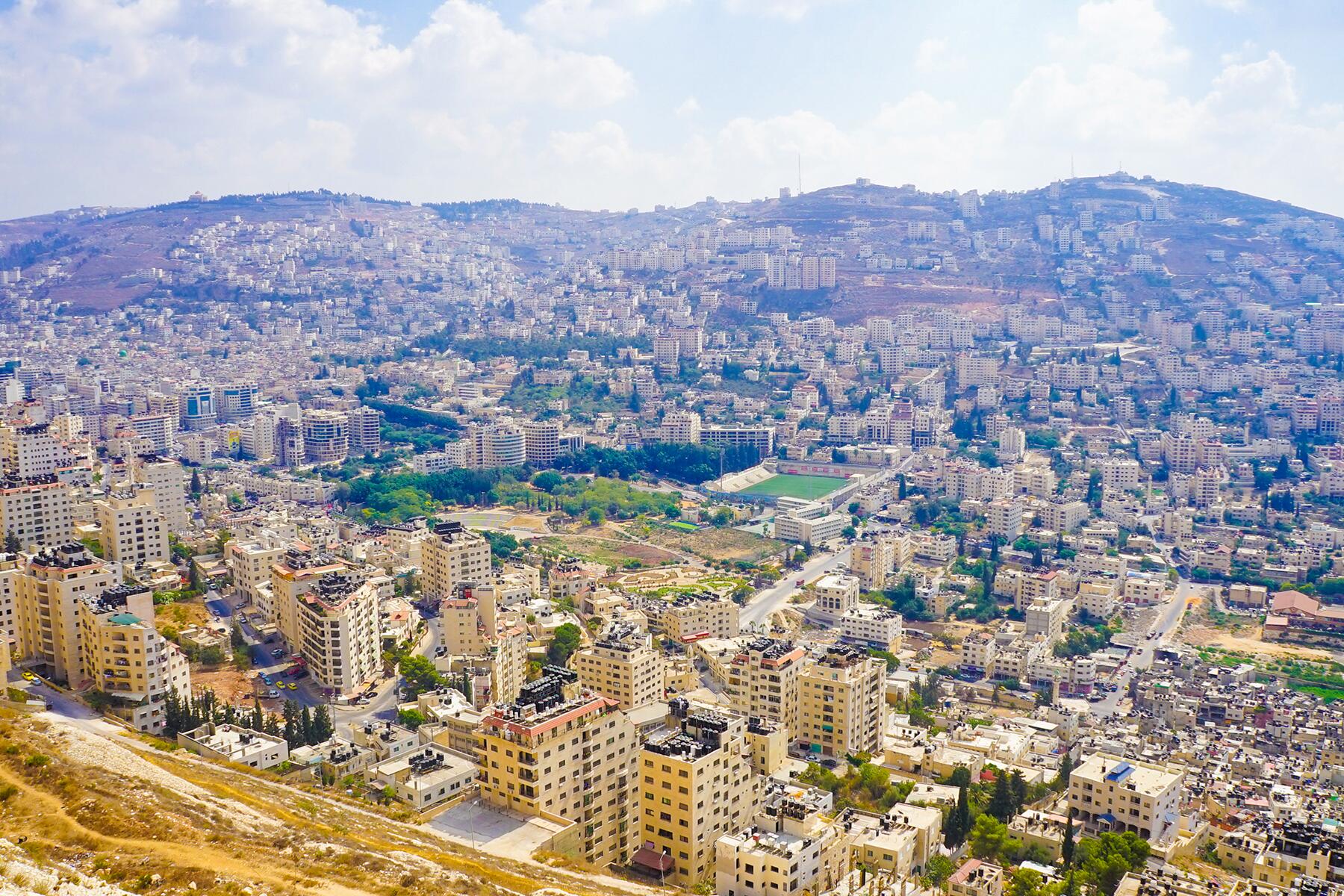 One of the largest cities in Palestine and home to both the Palestinian Stock Exchange and An-Najah University, Nablus is believed to have been a cultural, commercial, and strategic center for roughly 9,000 years. Today, however, the picturesque community tucked between Mount Ebal and Mount Gerizim is best known for its sweet tooth. Roughly 40 types of desserts are made here, including kunafe, a sticky delight made from sweet melted cheese sandwiched between layers of shredded pastry. Once you’ve munched your fill, stroll among the stone alleys of Old Town, duck into a shop for spices and artisanal soaps, or visit nearby the nearby village of Sebastia for an archaeological fix. 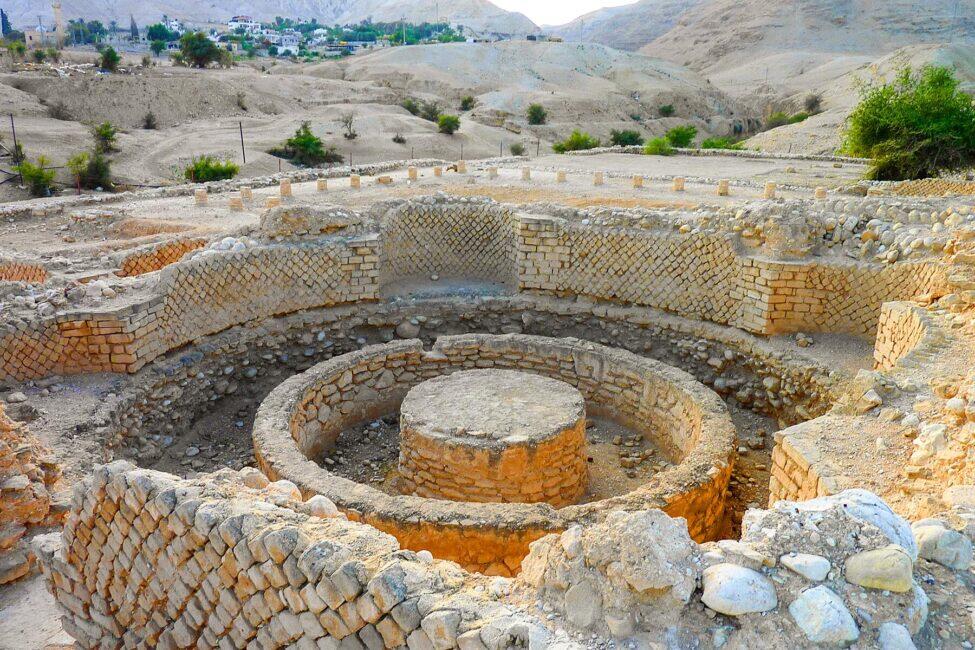 Bike the Sites in Jericho

Most people visit Jericho for the biblical sites: You can ride a cable car to Mount Temptation and glimpse one of the world’s largest floor mosaic’s—the  Tree of Life—at Hisham’s Palace. But archaeological evidence dates the city back to 9,000 BCE, making it one of the oldest continuously inhabited communities in the world. Exploring on two wheels lets visitors link additional sites, such as the ruins of Roman aqueducts, King Herod’s winter palace, and the Zacchaeus sycamore tree.

Across cultures and regions, people have been making alcohol for thousands of years, even in the Middle East. In fact, some of the earliest known beer production may have taken place 13,000 years ago near what is now Haifa, Israel. Today, perched on a hill in the West Bank’s last all-Christian town, the Khoury family crafts beer (including a non-alcoholic brew) and wine to showcase Palestine’s bounty, bring people together, and continue that ancient tradition. In addition to brewing classic beers and hosting an annual Oktoberfest party, Taybeh Brewing Company speaks directly to its Muslim neighbors by crafting a non-alcoholic option. Meanwhile, Taybeh Winery supports Palestinian farmers by sourcing organically grown West Bank grapes, including a handful of indigenous varietals such as Zeini and Boutin. Tastings and tours are available at both operations, which are located just up the street from one another. 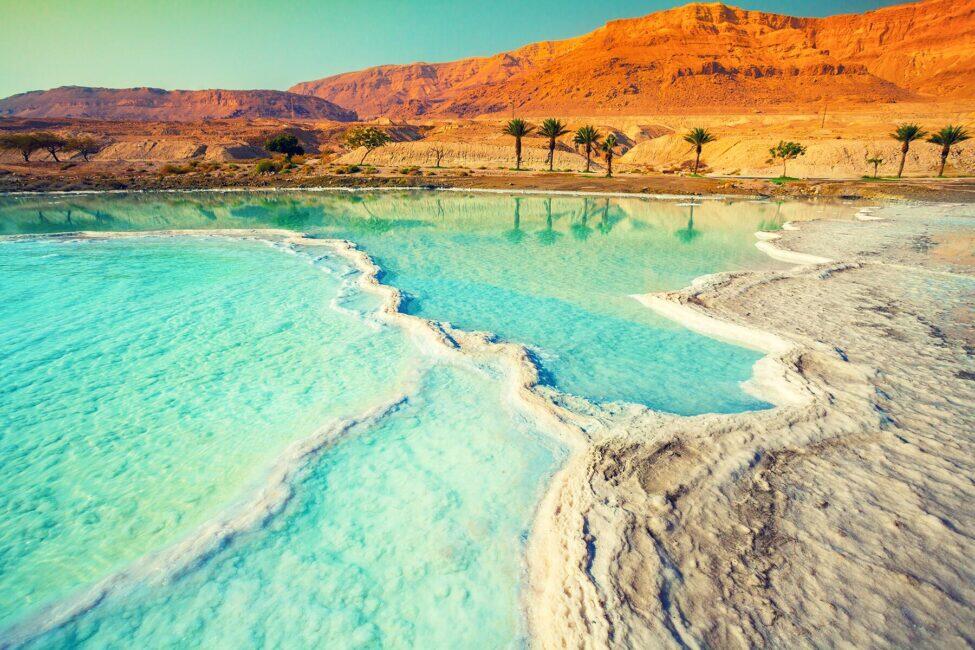 Sitting more than 1,410 feet below sea level, the Dead Sea is considered the lowest point on Earth. Superlatives aside, a day spent ogling the powder blue water and soaking in its saline splendor might be the perfect way to wrap up any trip to the region. Floating weightlessly is a great way to rejuvenate before a long trek home, and the minerals found in the Dead Sea’s water and clay shores are said to be good for the skin. So, soak up. In addition, the West Bank’s Kalia Beach has a sprawling beach with chairs and umbrellas as well as spacious locker rooms, on-site spa services, and a bar serving juice, beer, and snacks.

Whether you want to stick to the most popular sites or head further off the beaten track, this is a destination that warrants working with a responsible tour operator. In addition to their roles as translators and navigators—especially important if you’re hiking the Masar Ibrahim as route markers are regularly painted over—guides can help curious visitors dig deep and forge real connections in a region with a complicated context. Siraj is one of the community-based tourism organizations behind the Masar Ibrahim Trail. Based in the West Bank, they specialize in building trips for travelers wanting to spend time in rural communities and participate in active and nature-based adventures. To fulfill its mission of providing multiple narratives to a place, Mejdi Tours provides guests with two or more guides who offer diverse perspectives.

Even if you go without a guide, generally speaking, the West Bank is a safe, enlightening, and fun destination. Below are some tips for getting the most out of your time while putting your best tourist foot forward. 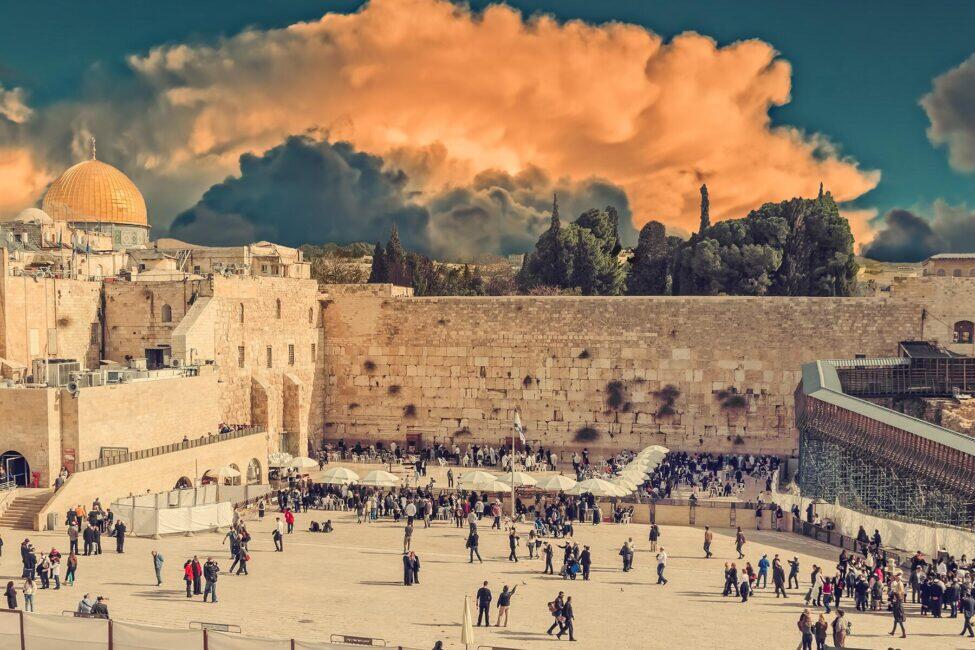 When it comes to clothing and behavior, remember that compared to the U.S., Palestine is pretty conservative, especially in rural areas. A good rule of thumb is to wear loose-fitting clothes and keep shoulders and knees covered, even when hiking. And pack a scarf—it can serve as a quick fix in a variety of situations, whether you need to cover your head to walk into a mosque or add some warmth on a chilly desert night.

Citizens of the U.S. don’t need a special visa to enter Israel or the Palestinian Territories. However, crossing into Israel and then the West Bank can still be intimidating, especially if you’re coming from a predominately Muslim country. Israeli security is notoriously suspicious and the process can take some time. It’s unlikely that your guide(s) will be able to accompany you during this time, so give yourself plenty of time and be prepared to answer a lot of questions about your plans and itinerary.

As you travel around the West Bank, you’re likely to hear your guides refer to areas by “Area.” We can thank the Oslo Accords for this complicated segmenting of the territory. While Israel retains the right to exercise “external security control” such as street sweeps or raids in all three areas, the Palestinian Authority (PA) has varying roles of governance. In mostly-urban “Area A” the PA oversees internal security as well as most internal affairs, from education to the economy. In “Area B,” which consists of more rural communities, the PA still governs many aspects of civil life but does not have any military authority. “Area C” comprises roads, settlements, military areas, and state-owned lands, including the locations of many important archaeological sites.

Before heading on an adventure, it’s easy to overwhelm your mind by devouring information. While it’s important to understand the history of Israel and Palestine, it might be more important to venture in with an open mind. No matter your preconceptions, try to suspend judgment long enough to listen to, and learn from, a new perspective. People will gladly share their stories.