News Ronny Maye Should You Cancel Your Vacation to an Area Impacted by a Natural Disaster?
NewsPerfect Week in Prague, Vienna, & Budapest for Fall and the Holidays

Perfect Week in Prague, Vienna, & Budapest for Fall and the Holidays

The fall and holiday seasons are terrific times to visit three uniquely beautiful European cities—Prague, Vienna, and Budapest—and you can do it in a single week. Home to abundant beer and wine culture plus festive holiday markets set in picturesque squares, these history-rich cities conveniently linked by easy rail connections let you sample Czech, Austrian, and Hungarian cultures over seven days. Here’s how… 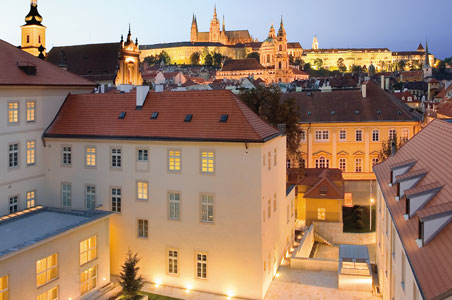 Morning: First things first. Land in Prague and check into your hotel. A fun option is 22-room Vintage Design Hotel Sax, featuring a bright 1960s theme (with fast free WiFi) and set on a quiet street in the Malá Strana neighborhood (from $120/night). If sleek contemporary design is more your style, consider 109-room Hotel Josef, a boutique property not far from Old Town Square with a rooftop sauna and fitness room (from $160/night). And for soothing Asian-meets-Czech ambience book the luxurious 99-room Mandarin Oriental Prague, once a 14th-century Malá Strana monastery—a glass floor in the spa offers glimpses of the past (from $385/night).

Lunch: To ward off the chill, duck into cozy Choco Cafe just off of Old Town Square for decadent hot chocolate as well as quiche, Panini, and salads. For a more sophisticated nibble dine at stylish CottoCrudo at the Four Seasons Hotel Prague, featuring a raw bar and fresh mozzarella dishes.

Afternoon: Shop the Holiday Market in Staromestske Namesti (Old Town Square), the city’s medieval heart where, from the third week of November, dozens of vendors sell handcrafted gifts and seasonal foods. The square is a vivid mosaic of architectural styles: Gothic, Renaissance, Baroque, and Rococo, dominated by the delicate spires of the Church of Our Lady Before Tyn. At the top of the hour, buy a hot-spiced wine and stand in front of the circa-1410 Astrological Clock to watch the parade of Apostles. Ogle more saints during a stroll across Charles Bridge, erected in 1390 and lined with 30 statues of everyone from Czech patron St. John of Nepomuk (with his halo of gilded stars) to St. Augustine.

Dinner: Dive into Czech culture by sampling its beer and cuisine at U Tri Ruzi, an intimate brewpub near Old Town Square where the Autumn Hop Lager pairs with the duck breast or fried pork chop. A more bustling option is Lokal, a beer hall serving Czech classics made with fresh local ingredients. 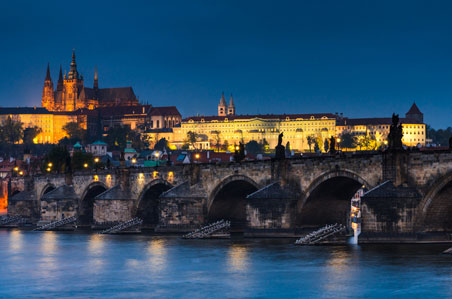 Morning: Visit the Church of Loreto, a must for anyone fascinated by cherubs, the lives of Catholic saints, and over-the-top Baroque style. Next, head to nearby Prague Castle, where you can tour St. Vitus’s Cathedral, a massive Gothic church that took six centuries to complete (don’t miss the two-ton silver Baroque tomb of St. John of Nepomuk), plus the Old Royal Palace with its vaulted 16th-century Vladislav Hall, and fairytale-like Golden Lane lined with historic 600-year-old houses.

Lunch: While still in Mala Strana, refuel at Cafe Savoy with its elegant Neo-Renaissance ceiling dating to 1893 and classic Czech menu.

Afternoon: Cross the Vltava River via the Legion Bridge to see the circa-1883 National Theatre and the 1996 Frank Gehry-designed “Dancing House” and walk back to Old Town with photo-op stops at the Powder Tower and Municipal House.

Dinner: Depending on your appetite and budget, opt for a Michelin-starred tasting menu at La Degustation, flavorful and authentic Italian at Aldente, or deliciously prepared beef etrecote and fries at intimate Cafe de Paris. Afterward, mingle with locals and hear contemporary Czech music at Jazz Dock or enjoy classical music in one of Prague’s many churches.

Morning: Visit the Franz Kafka Museum or the Old Jewish Cemetery, to see its cramped 12,000 tombstones topping layers of bodies. 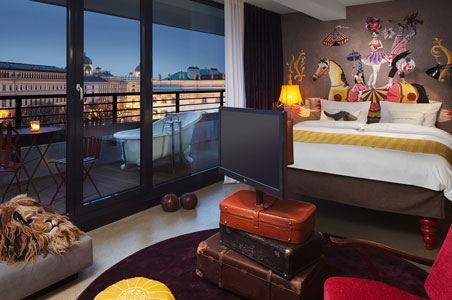 In Transit: By midday, take a train (under 5 hours) to Vienna, known for its elegant architecture, imperial splendor, and art museums, and check in: Friendly staff, a lively rooftop bar, and quirky design (like in-room murals by illustrator Olaf Hajek paying homage to the Viennese circus) are the draw at the new 219-room 25Hours in the MuseumsQuartier (from $143/night). A central location adjacent to St. Stephen’s Cathedral, sophisticated ambience, and striking spire views from some rooms are highlights at 43-room DO&CO Hotel (from $339/night). And late 19th-century architectural elegance paired with modern Viennese interior design shine at the new 153-room Palais Hansen Kempinski Vienna (from $405/night).

Dinner: Vienna’s most famous dish is wiener schnitzel. Try it at Figlmuller (reserve ahead), where the meat is pounded thin, but the generous portion covers an entire plate. End on a sweet note with the classic Sacher-Torte, a chocolate-apricot cake topped with whipped cream that was created in 1832 at Cafe Sacher. And head to Hotel Sacher’s Bohemian-luxe Blue Bar for the perfect night cap. 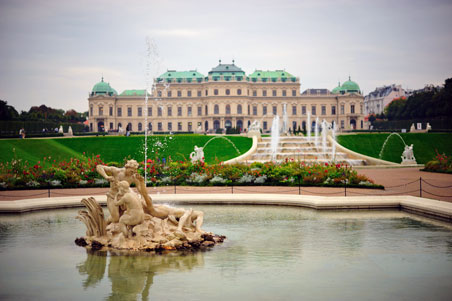 Morning: Visit the Belvedere Palace to view some of Gustav Klimt’s most inspiring works, including “The Kiss,” as well as major paintings by Egon Schiele and other Austrian artists, displayed amid the grandeur of two 18th-century Baroque palaces.

Lunch: If the weather cooperates, mingle with locals dining al fresco on everything from Viennese to Vietnamese at the open-air Naschmarkt. If it’s inclement, grab a snack in the café at the Leopold Museum in MuseumsQuartier.

Afternoon: Fire up your holiday spirit with a visit to the Viennese Christmas Market in front of City Hall (Nov. 16-Dec. 24) and marvel as dusk turns it into a fantasyland of lights and music.

Dinner: Experience one of the newest fine-dining options in Vienna: Chef Philipp Vogel’s nuanced seasonal a la carte menu at Edvard in Palais Hansen Kempinski. Then head to the hotel’s chic Henri Lou bar for cocktails and DJ-spun music (Thurs-Sat). 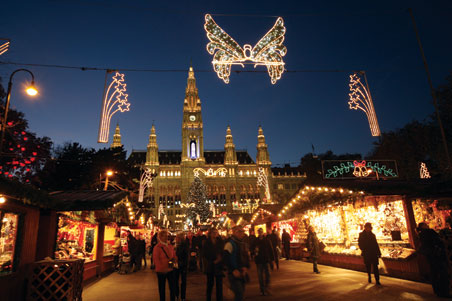 Morning: Visit the Hofburg Imperial Palace to see the famed Lipizzaner stallions at the Spanish Riding School and learn about the Hapsburgs—especially Emperor Franz Josef and Empress Elisabeth (“Sisi”)—on a tour of the Imperial Apartments and later the summer residence at Schonbrunn Palace.

Lunch: Settle into a traditional café for coffee or Austrian pilsner with sausage or goulash at: Cafe Landtmann (upscale and non-smoking), Cafe Central (beautiful and famous), Cafe Schwarzenberg (the first café on the Ringstrasse).

Afternoon: Check out two of Vienna’s landmarks: Hundertwasserhaus, a surreal free-form apartment building by Freidensreich Hundertwasser, and the circa-1897 Giant Ferris Wheel (Wiener Riesenrad) in the Prater.

Dinner: Sample a variety of Austrian wines and small plates at one of Vienna’s many wine bars. Top options include in the bar at Zum Schwarzen Kameel to people watch as you sip wine (standing room only), tiny (and smoky) Vis-a-Vis to sample wines by the glass, and Wein & Co Stephansdom to mingle with young locals. 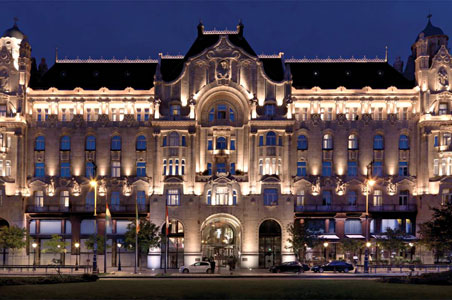 Morning: Catch a morning train (2.5 hours) to Budapest, a city of 1.7 million nicknamed both the “Pearl of the Danube” and the “Paris of the East” and divided by the river into charming medieval Buda dominated by the former Royal Palace and ornate late-19th-century Pest, and check into your hotel: One of the city’s sleekest options is Lanchid 19, a 49-room Design Hotel located near the Chain Bridge on the Buda side—if you can, splurge on a Panorama Suite (from $99/night). On the Pest side, with rooms featuring river views, is 357-room Sofitel Budapest Chain Bridge (from $179/night). The most luxurious is the 179-room Four Seasons Hotel Gresham Palace, located in a restored circa-1906 apartment building with a tiled T-shaped lobby and understated rooms that let the Art Nouveau architecture soar (from $385/night).

Afternoon: Walk across the landmark Chain Bridge from Pest to Buda and if the line for the funicular isn’t too long ascend Castle Hill the easy way (you can also walk up). The panoramic photo ops at the former palace turned Hungarian National Gallery, photogenic 14th-century St. Matthias Cathedral, and the seven decorative towers of the 19th-century Fisherman’s Bastion are superb.

Late Lunch: Stop for a glass of mulled wine or Hungarian red and a snack accompanied by a live musical serenade at Halaszbastya, in the last of the seven towers of the Fisherman’s Bastion.

Dinner: Begin your evening with a one-hour post-sunset river cruise on the Danube Legend, which despite hokey commentary offers inspiring views of flood-light-lit buildings all along the Danube. Keep the theme going with dinner at Spoon Cafe & Lounge, a contemporary eatery located on an elegant boat docked on the Pest side. 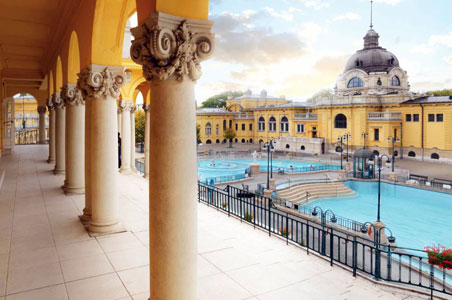 Morning: To guarantee an inside look at the Hungarian Parliament building (a Gothic Revival stunner designed by Imre Steindl in the late 19th century) reserve tour tickets in advance online. Then walk through Szabadsag (Liberty Square) to admire the monumentally grand buildings that surround it before continuing on to the gilded elegance of late-19th-century St. Stephens Basilica. Next, walk up Andrassy Way, modeled after the wide boulevards of Paris, to the Hungarian State Opera House, a glimmering neo-Renaissance gem completed in 1885 (or better yet, book tickets for a performance).

Lunch: Stop for a bite at a café along Andrassy Way—or if you’re visiting from late November to late December try the buffets at the Budapest Christmas Fair in Vorosmarty Square.

Afternoon: Pack a swimsuit, towel, bathrobe, and flipflops and take the No. 1 subway to Szechenyi-furdo to experience the Szechenyi Baths, steaming neo-Renaissance public pools opened in 1913 featuring thermal spring water that’s a soothing 98.7 degrees—watch the old men playing chess as they soak.