Actun Tunichil Muknal cave is not for the claustrophobic, arachnophobic, or anyone afraid of the dark. In fact, ATM cave is best for travelers who don’t mind jungle hiking, river crossing, mosquitos, and mud--and that’s only the trek to the cave.

Our guide stood on rocks in the jungle river, the water gently flowing over his shoes. “While we are inside,” he said, “be careful not to step on the skulls.” Our group of 10 tourists-turned-cave-explorers laughed. Our guide, also laughing, quickly added. “No, really—don’t step on the skulls.”

This was at the entrance to Actun Tunichil Muknal (ATM) cave. We had reached it after hiking the trails and rivers of the Tapir Mountain Nature Reserve in Belize. Forgotten in the jungle until it was rediscovered until 1989, it was used as a spiritual center by the Maya people from around 600 to 1000 AD. Now, it’s one of San Ignacio’s top attractions for adventure tourism with daily tours led by guides approved by the Institute of Archaeology, part of the Belize government’s National Institute of Culture and History.

Our guide had stopped us in front of the cave to prep us for the adventure that was to come: an hour of caving across damp walls, climbing past boulders, and moving through nearly three miles of caverns, illuminated only by helmet lights. Significant swimming is required as a river flows through most of the cave, with the only dry section at the cave’s end. With such a major source of water here, it’s understandable that it was seen as a sacred place during times of drought during the peak of the Maya civilization.

According to Maya legend, the cave was a place where spirits could travel between three worlds: the heavens, the earth, and Xibalba, the underworld, or “place of fear.”

According to Maya legend, the cave was a place where spirits could travel between three worlds: the heavens, the earth, and Xibalba, the underworld, or “place of fear.” By straddling both the earth and the underworld, ATM cave provided a gateway where spirits could move unencumbered between worlds, and thus a place where humans could be closest to both evil spirits and exalted deities. As such, it became an ideal place for religious ceremonies.

The Maya gods weren’t altruistic or charitable, and sacrifices were required in order to bring humans essential tools for life: water, crops, pleasant weather, and wildlife to hunt. Halfway into the cave, archaeologists found evidence of these offerings ranging from maize to pottery to tools. In the furthest recesses, they’ve found proof of the most extreme offering given when the drought of the 9th and 10th centuries turned lethal: human sacrifices.

Evidence of sacrifice becomes more frequent as the cave deepens, suggesting that the cave became more spiritual as it went on. The further one walked into the cave, the thinner the separation between worlds became. The journey into the innermost caverns was both dangerous and precarious; dropping a torch into the water could plunge the holder into pure darkness, stranded on unstable and jagged rocks.

It was in the deepest section of the cave—a series of dry, raised caverns—that the Mayans would begin the ceremonial processes. During our tour of the caves, our guide had us turn off our headlamps, leaving his as the only light in the space. He shined his light on certain formations, creating otherworldly shadows on the walls much like the ancient Maya might  have seen: a stalagmite mimics an old woman carrying a basket; a cathedral-sized rock pile becomes a shadowy outline of onlooking Maya deities. 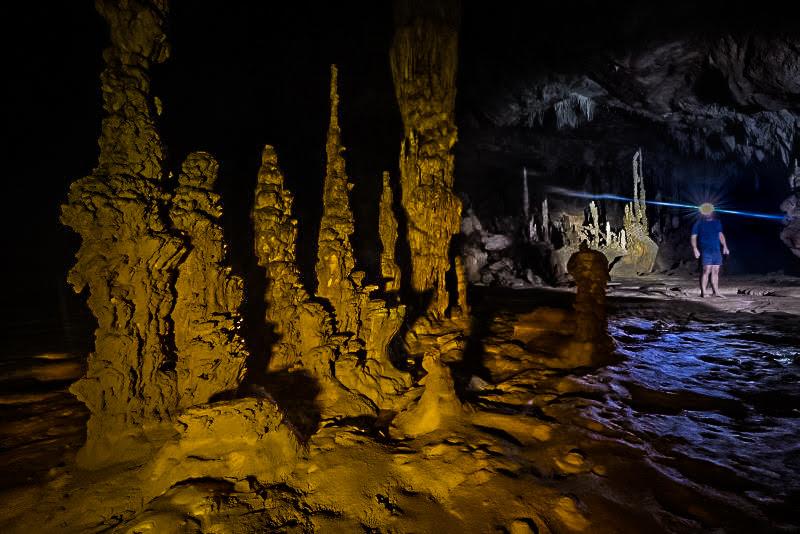 It’s in this dry, deeper part of the cave that evidence of offerings and sacrifices are most visible. Though many of the nearly 1,500 objects found have been transferred to a museum, many more are still left in situ, lying where they were placed or discarded a thousand years ago. The dry, cool air of the caves keeps them shockingly well preserved, with vessels carrying food sacrificed to the gods in perfect circles around the remains of bonfires. Some cups and urns are smashed, making it easier for the gods to enjoy the bounty inside. While touring the cave, guests must watch their step, both to avoid slipping on rocks and to avoid stepping on the artifacts, which lie often unmarked and unprotected from foot traffic.

However, as any mythology aficionado knows, the gods can be fickle: begging can go unanswered and bad luck often continues despite worship and reverence. This was the case around 900 A.D. Despite the gifts, the drought continued and crops weakened. It was around this time that Mayan leaders realized more had to be done to ensure their efforts weren’t met with silence. Chaac, the Mayan god of rain, needed more than food and tools. The next step was a blood sacrifice to appease Chaac and bring life-giving rains back to their world.

And so sacrifice they did—more than a dozen skeletons or partial skeletons have been found in ATM cave. Many are still arranged in a proper skeletal form, suggesting that they were sacrificed on-site where they lay. Some show evidence of the victims being bound and slowly killed, perhaps to draw out as much blood as possible for Chaac. As with many ancient cultures, children and women were believed to be the most pure, making them the most effective sacrifices for the gods. With headlamps off, plunged into darkness, it’s eerie to imagine the victims of 1,000 years ago entering the cave, knowing they were walking to a violent, bloody, and drawn out death. The final glimpse of sunlight and feeling of icy water against their skin as they swam to their end would be some of the last sensations of their lives. The otherworldliness of that experience would have been compounded by the hallucinogens commonly used to enhance the spiritual connection, both for the ritual leader and the sacrificial victim.

Because of the calcification throughout the cave over the last thousand years, her bones glisten in the light of headlamps, earning her the Crystal Maiden moniker.

The highlight of the tour is one of those young sacrifices, the Crystal Maiden, both stunning and macabre, believed to be the skeleton of a girl approximately 18 years old. Her form is oddly contorted and at least two of her vertebrae are crushed, suggesting to researchers that she was tossed on the ledge where she rests after being violently paralyzed and murdered. Because of the calcification throughout the cave over the last thousand years, her bones glisten in the light of headlamps, earning her the Crystal Maiden moniker. Below her, empty and crushed pots lay in what is believed to be a trash heap—perhaps one she was intended to rest in.

The Crystal Maiden is accessible only by climbing a ladder to an upper ledge, as she’s in the furthest recess of the cave. Though she is almost entirely intact, other skulls have been damaged by tourists—some significantly, like when a camera was dropped on a skull in 2012. As such, cameras of any kind are completely banned from the cave, and this is strictly enforced. 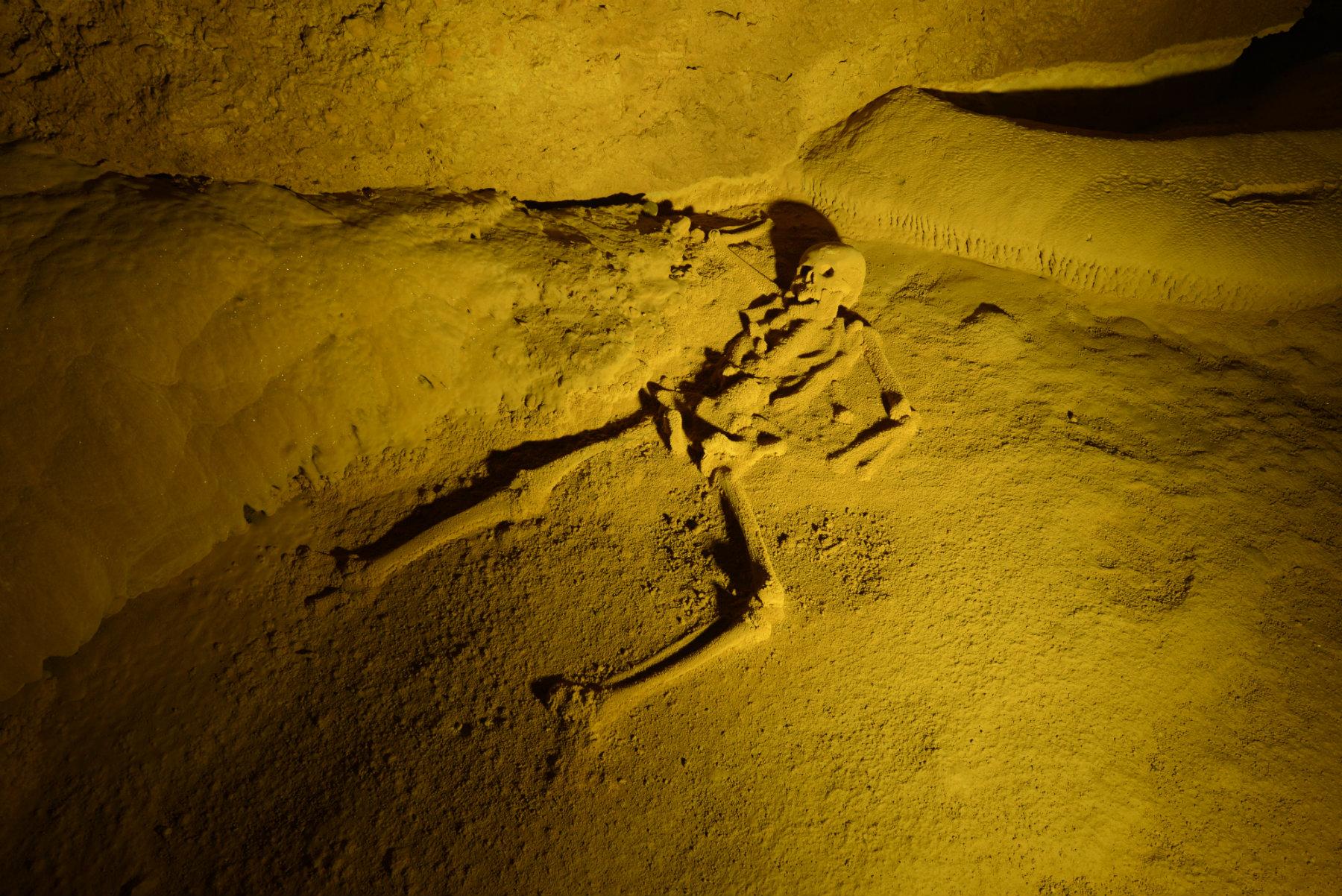 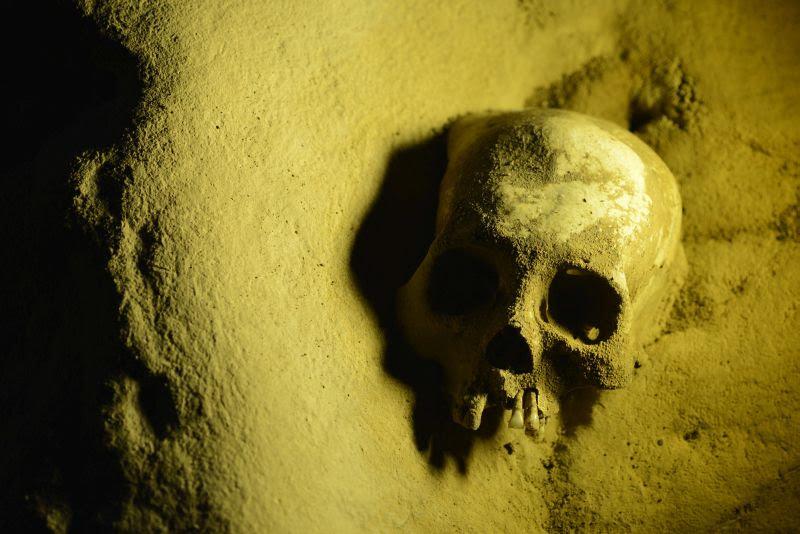 Actun Tunichil Muknal cave is not for the faint of heart. It’s also not for the claustrophobic, arachnophobic, or anyone afraid of the dark. In fact, ATM cave is best for travelers who don’t mind jungle hiking, river crossing, mosquitos, and mud- and that’s only the trek to the cave.  However, those willing to squeeze, swim, and duck through tight spaces and underground rivers will find themselves rewarded with access to one of the most unique sites in the heart of the Belizean jungle. Just don’t step on the skeletons.