Tour the Top 25 "Sex and the City" Locations 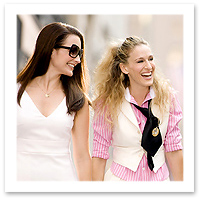 New York City itself has been called the fifth major SATC character, alongside the fabulous foursome of Carrie, Charlotte, Samantha, and Miranda. Take a tour of Manhattan with this guide to the television series’ most memorable real-life locations.

We’ve organized these sights geographically, from the southern tip of Manhattan all the way up to Central Park. To take your own SATC walk, choose either the downtown or uptown half of our list—or be ready to hop in several taxis along the way, as there’s a lot of ground to cover!

Staten Island Ferry. On the girls’ way home from a firefighter-calendar contest in Staten Island, Charlotte announces to the world, “I’m getting married this year!” The 25-minute boat ride gives great views of lower Manhattan, and best of all, it’s free! Departs from the Whitehall Street Ferry Terminal

Onieal’s. Scenes at Steve’s pub, Scout, were filmed at this Little Italy bar-restaurant. Once a speakeasy, the building had a tunnel connecting it to the police headquarters across the street. 174 Grand Street 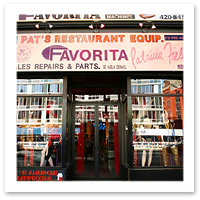 Patricia Field. Crimson-haired Field has been New York’s iconic vendor of club-kid clothes for decades. Then she became the stylist for SATC and her name ricocheted around the world. Her current downtown store is packed with outrageous clothes and accessories; some, like the nameplate necklaces, hark back to the show. 302 Bowery

Trapeze School New York. Carrie takes a flying leap for an assignment and realizes the value of a safety net. At this branch of TSNY, students swing over the Hudson River– and locals love watching them from a waterfront promenade. Pier 40, on West Street

Buddakan. This trendy, upscale Chinese restaurant in the Meatpacking district was the scene of Carrie and Big’s rehearsal dinner in the Sex and the City movie, where Miranda’s notorious outburst causes Big to get cold feet the night before the wedding. 75 9th Avenue

Il Cantinori. Carrie celebrates her 35th birthday here– alone. This was one of the first New York restaurants to do Tuscan food in a sophisticated setting, and celebs rely on it for its discretion. 32 E. 10th Street 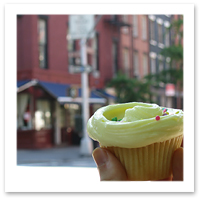 Magnolia Bakery. Carrie tells Miranda about a major crush while scarfing down one of this bakery’s signature cupcakes. Magnolia’s buttercream-topped treats ignited a sweeping cupcake craze. Here’s a local tip: for a faster fix, skip the long line at the original Bleecker Street location and head uptown to the second branch on Columbus Avenue. Magnolia Bakery also now has locations in Bloomingdale’s on Third Avenue, in Grand Central Station, and in Rockefeller Center.401 Bleecker Street, 200 Columbus Avenue

City Bakery. Carrie and Samantha discuss “the face girl” over lunch at this polished take on a cafeteria. New Yorkers love City Bakery for its pretzel croissants and, as Carrie proclaims, the best brownies in New York. 3 W. 18th Street

Pete’s Tavern. While sitting on the patio, Miranda asks Steve to marry her. Pete’s is the longest continuously operating bar and restaurant in the city. 129 E. 18th Street

Eleven Madison Park. Big breaks the news to Carrie: he’s engaged to the “stick figure with no soul.” Although the location evokes heartache for loyal SATC fans, the restaurant is one of the most innovative in the city. 11 Madison Avenue

Church of the Transfiguration. Samantha tries to get to know a priest in the Biblical sense at this house of worship. Called the “Little Church Around the Corner,” this church has longstanding ties to New York’s theater community. It got its nickname in 1870 when the rector of a nearby church turned down a request to bury an actor, referring to a “little church around the corner” that would do “that sort of thing.” At the time, acting was considered a scandalous profession. SATC probably wouldn’t change that rector’s mind… 1 E. 29th Street

New York Public Library Humanities and Social Sciences. While lunching on the library’s steps, Miranda tells two strangers “he’s just not that into you.” Behind the library is Bryant Park, where Carrie became “fashion road kill” on the runway at a charity show. Fifth Avenue at 42nd Street

Russian Samovar. Bring on the blini and caviar! Carrie has a memorable first date with the mysterious artist Aleksandr Petrovsky at this classic Russian restaurant. The renowned dancer Mikhail Baryshnikov, who played Petrovsky, is one of the restaurant’s investors. 256 W. 52nd Street 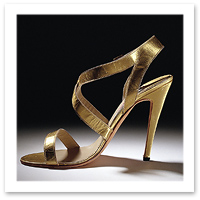 Tiffany & Co. Charlotte and Trey do some serious ring-shopping at this classic jeweler. New Yorkers love Tiffany for its silver as well as for its sparklers. 727 Fifth Avenue

The Paris Theatre. Carrie muses, “the most amazing thing about living in a city like New York is that any night of the week you can go to Paris.” She goes to see a movie on her own on “date night” at this glamorous, old-school, single-screen theater. The most romantic seats in the house are up in the balcony. 4 W. 58 Street

The Plaza. Carrie sees Big in front of the Plaza after his engagement party, and the iconic “Ex and the City” monologue begins. Reopened in 2008 after a massive renovation, the historic Plaza is now part-hotel, part-condo, and all luxury. 768 Fifth Avenue

Columbus Circle Fountains. Carrie and Aidan realize it’s not going to work once and for all at this picturesque fountain. The fountain steps and benches are a great place for an alfresco snack, after picking up a treat from the adjacent Time Warner Center’s Bouchon Bakery. Central Park West and Broadway

Monkey Bar. While Carrie may have chosen Big in the end, the show’s star had a host of other suitors over the course of six seasons. In season 4, Carrie meets a brief fling, jazz musician Ray, at this swanky bar and restaurant in Midtown East. Monkey Bar was also featured on an episode of Mad Men. 60 E. 54th Street

The Loeb Boathouse Restaurant. Carrie and Big meet here for lunch… and an unintentional swim. Set right on Central Park Lake, the Boathouse is a romantic place for brunch or dinner; an authentic Venetian gondola sometimes glides by. Park Drive North, near E. 72nd Street

Visit the Official Sex and the City Movie homepage, or check out Cosmo Guy Online for the behind-the-scenes scoop on all things SATC.