♫ Don’t scab for the kings, don’t listen to their lies, us poor serfs haven’t got a chance, unless we organize. ♫

When we picture life as a Middle Ages commoner, one (okay, I) might be inclined to summon up images of an endless stream of days tilling the fields for mud and medically repurposed leeches, the endless toiling only coming to a halt for the occasional witch burning. Turns out, our (my) impressions of medieval peasant life might not be as factually informed as we (I) think (and not just because Monty Python and the Holy Grail isn’t a terribly reliable source of information on the medieval period in Europe).

There were a handful of reasons that contributed to this more “laidback” way of life. For one thing, if you worked in the fields, your job was inherently seasonal. But unlike the present day, where a seasonal job means a temporary retail gig that lasts between Black Friday and Christmas and then scrambling on to your next job when work came to an end for a season, that’s just it: It came to an end for the season. 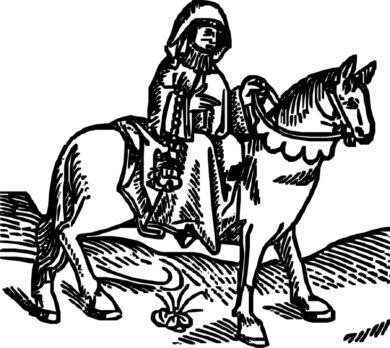 And when you did work, sure, you were probably in the fields “from dawn to dusk” but that didn’t mean that you were at your plow for every minute of that period. Schor references the writings of James Pilkington, a 16th-century bishop, in which he describes the average working day of the “labouring man” as starting with a “long rest in the morning; a good piece of the day is spent afore he come at his work; then he must have his breakfast…when the clock smitheth, he will cast down his burden in the midway…At noon he must have his sleeping time…and when his hour cometh at night…he casteth down his tools, leaveth his work, in what need or case soever the work standeth.” (A far cry from an age where some warehouse workers are so heavily deterred from taking normal bathroom breaks they’ve turned to urinating in bottles.) Outside of agriculture, a “days-works” would be about half a day for “servile laborers,” and artisans and masons could be worked out to a yearly average of nine hours a day. And, Schor notes, thanks to the influence of the church and its plethora of saints and rest days, English peasants likely didn’t work more than 120-150 days a year. That’s about 215-245 days off a year.

Vacations as we know them now weren’t quite a thing yet, but you know what made for a great excuse to get out of your hamlet and see some new sights? A good, old-fashioned pilgrimage. All of this makes sense if you stop to think about it, because what were The Canterbury Tales if not the Middle English version of going on a group outing with your new friends from the hostel?

Basically, if Fodor’s had been around in the 1200s, we might’ve had a Spiritual Journeys to the Holy Land series of texts.

And for those who couldn’t go on pilgrimages, there were “allegorical pilgrimages.” Texts like the itinerary maps of Matthew Paris, a 13th-century monk who compiled information and stories relayed to him by travelers, acted as guides for pilgrims that were made up of relevant information and illustrations of notable geographic points. Basically, if Fodor’s had been around in the 1200s, we might’ve had a Spiritual Journeys to the Holy Land series of texts. So even if you couldn’t physically go to Jerusalem (or even Canterbury), you could take all that time you weren’t farming and have yourself a little spiritual staycation.

Contrast that to the present day, where the U.S.—despite the standards set by every other comparable country—doesn’t guarantee workers any kind of paid vacation or holidays. And you don’t have to go back to the Dark Ages to see when Americans were better rewarded with time off. In the 20th century, according to CNBC, Americans took off an average of more than 20 days a year between 1976 and 2000. Since then, the number of days has declined. According to the Bureau of Labor Statistics, only 76% of private industry workers in 2017 received paid time off at all. Of that 76%, workers received an average of 10 vacation days after one year of service, and an average of 15 days after five years of service.

So when are things going to change for American workers? (It’s unlikely that finding a mud field to till is going to be a viable option in this day and age.) For strides in the right direction, you’ll have to look to the organizations that gave us the 40-hour workweek in the first place: unions. The news on this front is a bit of a mixed bag. On one hand, union-busting is alive and well, but unions like United Automobile Workers and more than 80,000 Kaiser Permanente workers continue to leverage their collective power for better pay and working conditions. Sounds like we all deserve a vacation.