News Samantha Linnett Is This Budget Travel Hack Worth the Risk?
Photo by Petty Officer 1st Class Cynthia Oldham. The appearance of U.S. Department of Defense (DoD) visual information does not imply or constitute DoD endorsement.

One civilian has herself a merry little Christmas in Antarctica with the Coast Guard.

I came aboard the United States Coast Guard Cutter Polar Star in November to join her journey to Antarctica. I met her in Hawaii–the massive, 13,160-ton, red-hulled icebreaker that would be my home for the next three months.

A uniformed officer guided me through the multi-level metal maze of passageways that led to my berthing. Along the way, I spotted something strange on the walls–striped candy canes. About every 10 feet, a single cane was taped to the metal; sometimes a pair were arranged in a heart shape. They were so sparse that I guessed they were leftovers from last year. But my guide assured me that they had just appeared and that some had already been eaten.

That little attempt at festivity seemed pitiful to me. I felt sorry for the person who had spent time sticking the candy along these gloomy passageways and even sorrier for the individuals who had been so desperate for sweetness that they’d eaten the decorations. I wondered if, after a few months aboard, I’d be eating them, too. 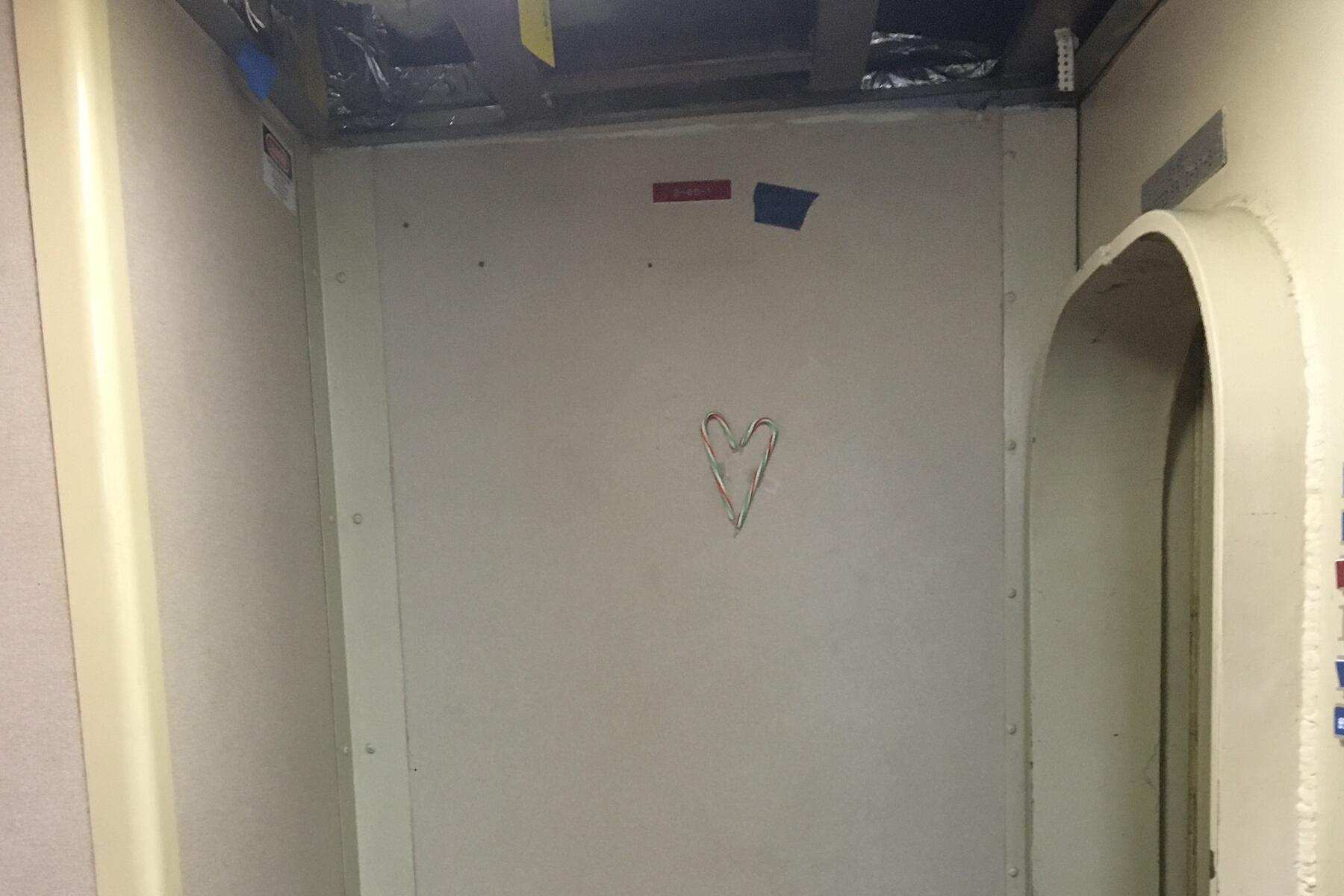 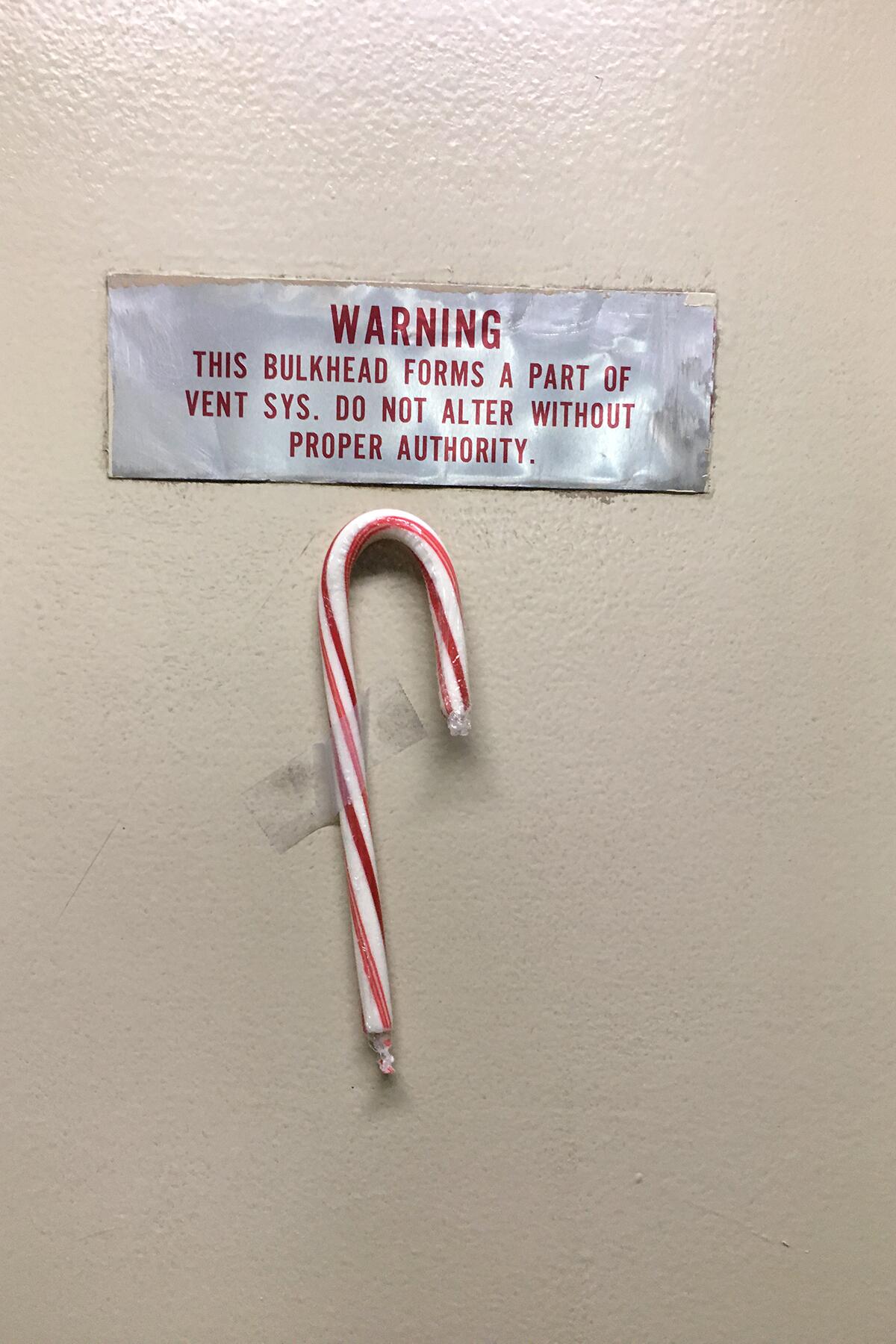 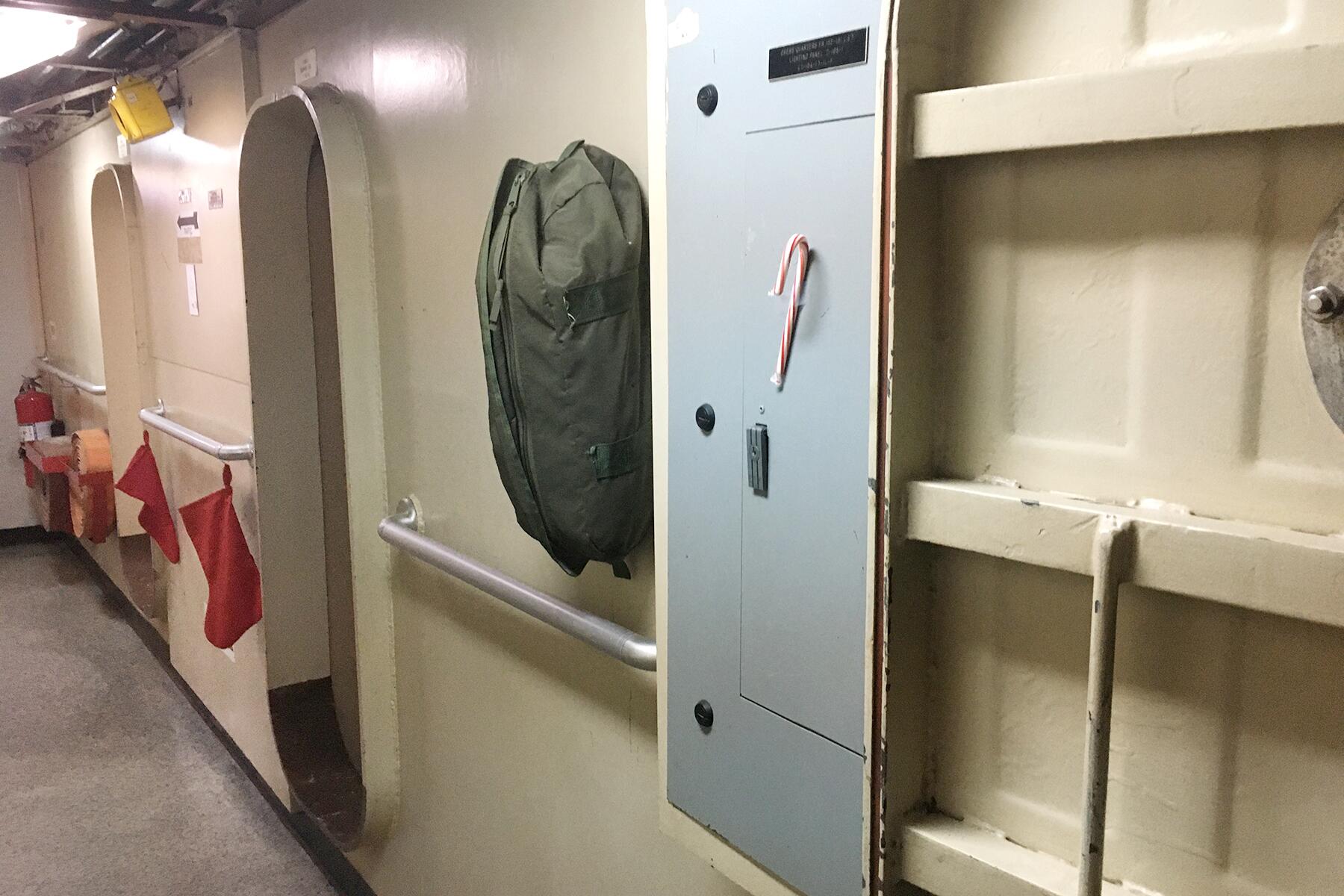 I teach Vincennes University English classes to the Coasties, as they’re called. I love it, but being at sea in cramped quarters and rough weather through the Christmas season can take its toll on my mental health. I keep thinking, “I’m putting the ‘sea’ back in ‘holiday season.'” But I still miss my family–as does every single other person aboard. We’re all in the same boat, so to speak.

My first ordeal (or celebration) was to get through Thanksgiving in the wardroom, the officers’ dining room. I’d thought that by meeting the ship on the Friday after turkey-day I could avoid a celebratory dinner with strangers, but the ship’s chef, Culinary Specialist First Class Cindy Friend, had decided to put off the feast until the ship was once again underway. On Saturday afternoon, in a gleaming, rocking kitchen about the size of a living room, Friend and her team of 12 cooks made roast turkey, ham, and every conceivable side dish and dessert.

Cooking aboard a working icebreaker has special challenges. Every workspace is equipped with handles at waist-level, so cooks have something to grab when the ship starts rolling. Pots on the stovetop are tethered into place with strings, so they can’t fall over. Sometimes the ship lists too far to port, and a sheet cake or tray of brownies comes out lopsided–thin and burnt at one end, thick and gooey at the other. But Thanksgiving dinner was a Goldilocks meal: everything was juuust right.

Despite my nervousness about summoning small talk with my new cadre of Coast Guard buddies–none of whom I’d have anything in common–Thanksgiving dinner was as good as any I’d eaten. Serotonin-sated, I joined in the conversation and even enjoyed it–a little.

If food matters to morale on an average day, it’s even more essential during the holidays. To make the long journey seem less lonesome, Friend caters to individual requests. If anyone on board is craving a particular festive food or drink (other than alcohol, forbidden on U.S. military vessels), Coasties only have to ask.

“If someone wants something that will remind them of home, make them feel a little less homesick, or more like they’re with family, we’ll make it,” Friend says. “Or if they want to make it, we’ll support them, let them use everything we’ve got.”

For Christmas, Friend says, “We’ll do prime rib, and [the senior chief to whom she reports] wants a ham. We’re deciding between mashed potatoes and au gratin. For dessert, cookies, cupcakes, pies—whatever people want.”

She adds, “We try to make it as fun for them as we can. We’ll be decorating cookies, and anyone can help with that. The crew does stocking stuffing and we have a fancy Christmas meal, and we set out appetizers at midnight on New Year’s Eve.”

This is the third Christmas (and New Year’s and Valentine’s Day) that I’ll be spending at sea, so I’m kind of used to it (as is my partner). Also, at 61 I probably have lower expectations for holiday joy than many of the twenty-somethings who are away from their families for the first time.

The last two winters, I was on board smaller cutters operating in the Caribbean and the East Pacific, which were on national-security missions. On those ships, I occasionally had to cancel class because the crew were chasing down a drug boat smuggling cocaine, or rescuing migrants drifting through the ocean in tiny boats without power or food. Those experiences made for great “narrative” papers in composition classes, but my students were tired a lot. This time, on the U.S.’s sole heavy ice-breaker, the mission isn’t secret (at least not the parts I know about!), and so far the hours are a lot more regular. The students still stand watches at odd hours, but they get good food and decent sleep, and they seem excited about where we’re headed even if it is hard work to get the ship there.

To reward and support the crew, “the command” authorizes some free time and allocates considerable funds to morale-boosters. (Note: “the command” is a loose term that I gather includes the highest-level officers on board, and possibly those entities ranked above them in the chain of command, arranged in upward ascension from the West Coast to Washington, D.C., to Heaven).

Also, “morale officer” is a thing. Santa Claus may not be real, but “morale” is an actual collateral duty on the Polar Star, assigned to Lieutenant Junior Grade Mia Miller. She’s new to the job but was on the ship the previous year and took part in many morale events up in the Arctic winter, when the crew was a lot less cheerful about the mission.

“Last year we had a rave, a dance party in the Arctic in the dark winter, with glow sticks, a DJ, blacklights; it was a good time.”

My first morale event on the Polar Star was also my first time to see karaoke. To my surprise, about 50 shipmates–many of whom had been working since dawn–showed up as well. At dusk, in the double helicopter hangar, Miller and assistants closed the massive rolling doors, set up the new sound system, and let anyone not on watch get funky with karaoke. Miller and another female officer kicked off the show with a rendition of “Girls Just Wanna Have Fun,” followed by a dozen or more enlisted people performing country ballads, millennials’ love songs, and rap classics. The chaplain, it turns out, has a beautiful bluesy voice.

I watched most of the show standing up leaning against the bulkhead, swaying slightly as the ship rocked through the waves. Most of the singing was just passable, but what impressed me was the openness and high spirits of so many people who hadn’t had a drink (or any other inhibition-inhibitor) for at least two weeks.

How does she get people to loosen up without taking a drink? “It’s a tight crew,” she says. “We wouldn’t [perform karaoke and dance] with strangers. But when you’re out for months with the same people, well, if you’re going to have fun with anyone it’s going to be with those people.”

Miller doesn’t know who put the candy-canes on the walls. She shrugs and says, “There are some sneaky elves on board.” But she will admit to a few efforts to keep spirits high throughout the holiday season, which she refers to as a “non-denominational winter solstice celebration.”

“One thing we do,” she says, “is have families [of crew members] send gift packages to their members ahead of time. We have them all in storage, and we’ll deliver them to the individuals on December 24th, which just happens to be Christmas Eve. And there are care packages and hand-written cards from Grandmother Pauline.” Grandmother Pauline, it turns out, is a relative of one of the crew members, and she writes holiday messages to everyone.

“On the 24th, we have a dinner party, the ugly sweater contest, cookie decorating, and cocoa. And the next day we have a ‘day off.'” Miller makes air quotes around the term, indicating the irony of calling it a “day off” when people are still standing four-hour watches 24/7, and when a mechanical “casualty” requires immediate attention from any number of people. Still, a day off in air quotes is better than nothing. “This will be good in Antarctica. It’ll be cold outside. We like to jack everybody up on sugar and see what happens.”

Also coinciding coincidentally with Christmas Eve will be a “solstice-adjacent” sermon by the ship’s chaplain. On the first Sunday in December, I’d been aboard for less than 72 hours, but I made it to “Divine Services” held in the crew’s lounge/movie theater/video-game room. The chaplain told us that although it might not seem very Christmassy aboard this working military vessel, the day was Advent, the beginning of the Christmas season, a time to start welcoming the prospect of comfort and joy.

Let’s put the “advent” back in “adventure,” I thought cynically, but within 10 minutes, the chaplain was asking us to consider what we can give to other people that week, and reminded us that in offering kindness or love to other people, we are honoring the divine. And right then, my eyes were wet with more than morning seaspray.

I’m not on board this ship to drink champagne or shop myself silly, but to go somewhere I’ve never been–Antarctica–and do things I’ve never done, with people I’ve yet to befriend. This, it seems to me, is not just the best kind of travel, but the best kind of Christmas, too.