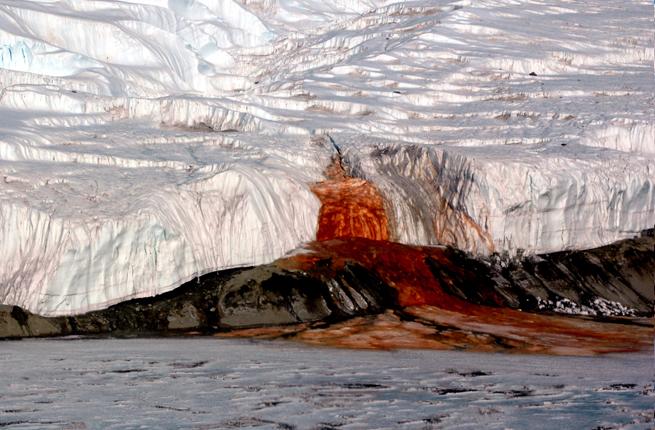 For over a century, scientists have sought to explain Blood Falls—the Antarctic waterfall that spills red water from the side of a glacier. The geologist who discovered the site in 1911 believed the water’s grisly hue was the result of microscopic red algae (a similar phenomenon occurs in the waters Russia’s pink Lake Burlinskoye). In 2003, however, researchers found that the water is imbued with its rusty color thanks to the presence of iron oxides and that the source was probably what was left of a frozen salt-water lake.

And now researchers have finally been able to unravel one of the last mysteries surrounding Blood Falls. (Which, surprisingly, involves no lairs of unspeakable eldritch horrors being uncovered.)

A new study from University of Alaska Fairbanks and Colorado College determined that the falls are fed by a large lake that’s been trapped under the glacier for more than a million years—without freezing over.

Researchers found that the lake was able to maintain to its liquid form in spite of being located under a literal glacier due to the fact that the heat energy released by water as it freezes in turn warmed the surrounding ice. This fostered a unique hydraulic system which in turn will allow for the “blood” of these unusual falls to flow for years to come.

For more on this story visit The Sun.