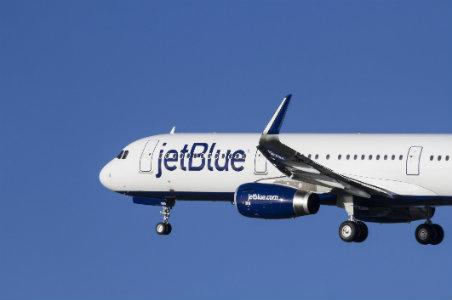 The past week has seen a number of improvements for JetBlue as the carrier continues to grow and improve its services. Perhaps the most significant is that JetBlue won the bidding for 12 slot pairs at Washington, D.C.’s Reagan National Airport (DCA) as part of the required divestiture from American Airlines and US Airways’ merger. These additional flights, in addition to the 18 current daily flights, will quickly make DCA JetBlue’s 6th largest airport by number of daily flights, directly behind the five main “focus cities” the airline operates in. JetBlue indicated in a statement that the 12 new flights will both add service to new destinations and increase service on existing routes; full details are expected later in the year.

JetBlue has also upgraded part of their technology infrastructure at 15 of its destinations, adding mobile boarding pass support via iPhone and Android apps. Passengers can now check in on their mobile device and, if traveling without checked bags, head straight to the gate using the app. The new airports supporting this service are:

Finally, JetBlue has also increased its participation in the TSA PreCheck program. When the airline first joined PreCheck in November, only passengers using a mobile boarding pass via the JetBlue app were eligible to participate. Now, passengers who get their boarding passes from a kiosk or ticket counter at the airport are also able to participate. As a result, JetBlue is now offering some form of TSA PreCheck screening at 40 airports, with either the mobile boarding pass or a printed paper pass. This should significantly decrease the wait times passengers have to endure at the airport. Passengers should still enter their Known Traveler Number into their itinerary when booking on JetBlue.com.