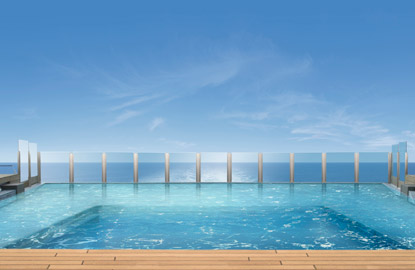 The sleek yet value-oriented Italian cruise line MSC Cruises rolled out its long-awaited MSC Divina on Saturday at a star-studded christening in Marseille, France. The latest in the line’s flagship Fantasia-class of ships (it joins ranks with the MSC Fantasia and MSC Splendida), the Divina incorporates signature Fantasia features, including the ship-within-a-ship MSC Yacht Club concept, offering guests personal butler service, exclusive venues, and complimentary wine and spirits.

But the ship stands apart from the pack, too, with an increased capacity (hosting 3,502 passengers, it’s now the largest vessel in the line’s 12-ship fleet), and innovative features like an infinity garden pool, a "beach zone" set up at the ship’s aft, and a disco-side eatery.

The ship’s godmother, legendary Italian actress Sophia Loren, and French actor Gerard Depardieu, who narrated the evening, were on hand at the May 26 christening, which included a gala dinner and performance highlights from Italian singer, pianist, and composer Paolo Conte, and UNICEF Goodwill Ambassador and classical performer Maxim Vengerov.

The Divina boasts a design scheme true to its "divine" theme, with decks named after gods of ancient Greece. Catch some rays at the infinity garden pool, or make way to the aft’s "beach zone," with sweeping views over the ship’s wake. Galaxy serves as the new in-disco restaurant, reminiscent of 1950s-style Italian nightclubs. Three onboard restaurants centered largely on Mediterranean fusion cuisine (along with a Tex-Mex alternative dining venue), an Acqua Park (where whirlpools, a pool bar, and some 150 fountains and water jets meet), and the Balinese-inspired treatments at the MSC Aurea Spa count among other noteworthy offerings.

The MSC Divina sails a series of 7-night Eastern Mediterranean sailings from Venice and Bari in Italy, with port calls in Katakolon, Greece; Izmir and Istanbul in Turkey; and Dubrovnik, Croatia, through October 2012, before expanding to longer 11-nights Mediterranean sailings for the fall/winter season. The ship will then move to Miami—an inaugural homeport for the cruise line—for the 2013/2014 Caribbean cruise season. Rates for the 7-night Mediterranean sailings start from $799 per person; MSCCruisesUSA.com.