Hotels & Lodging Amy Fallon Quiet Hours, Curfews, and *Chores*? Why the Tide May Be Turning Against Airbnb
NewsOff The Grid: Morocco Beyond Marrakech

Off The Grid: Morocco Beyond Marrakech 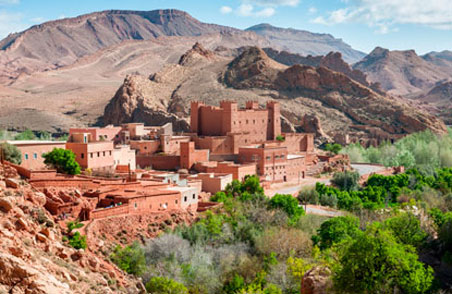 Although well travelled by tourists, Morocco remains a country where secret places abound. The desert is vast, as are the Atlas and Anti-Atlas Mountains and here, far from the cities and cultural centers, one can finds places removed from the camera-wielding crowds. Admittedly, many Berber desert towns are popular with tourists; they’re reached via the modern-day equivalent to the camel: the air-conditioned bus. But travellers equipped with their own four-wheel drive can move beyond the more traversed watering holes. The deep desert beckons.

The road that leads to the desert town of Erfoud passes through the Rif Mountains before descending towards Er-Rachidia, a former Foreign Legion outpost that sits on the edge of the desert plain. It passes through the gritty fossil-selling town of Midelt and then on to the remarkable Gorges du Ziz, the road spiralling down among abandoned ksours (fortified Berber villages). 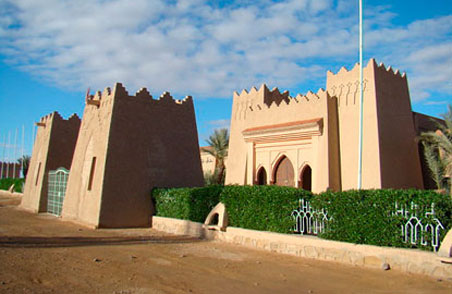 Erfoud has become something of a destination in recent years due to its proximity to the magnificent sand dunes of Merzouga. But it still feels like a frontier town, its economy based on fossilized trilobites and aquifers. From here, you can drive across the open desert to Rissani, a former slave market and now center of the huge oasis around it: the Tafilalet.

Rissani has a tumbledown market and scores of shops selling fossils and gems. Traders from the deep desert show up here, bringing pieces of meteors for sale. It’s an interesting stop for a night, but beyond it the roads peter out and a four wheel drive is necessary to reach the places that are even more remote.

There are two enigmatic mountains that reward the adventurous. One is Hmor Lgdad, "the red-cheeked one" in Arabic, and Jbel Issomour, a place famous for its prized trilobites, which are sold all over the world.

Insider Tip: It is very highly recommended that you only make the trip to Jbel Issomour with a guide. The easiest way to do this is to stop in Rissani and find a fossil seller or guide to take you to the various fossil villages around the mountain. 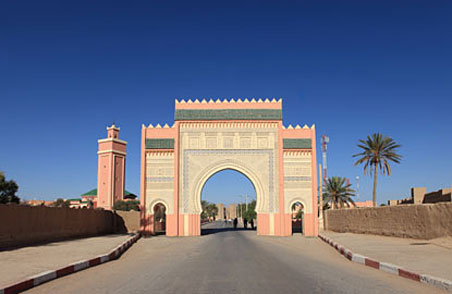 Issomour makes the most rewarding detour, though the journey from Erfoud is arduous and requires an expert guide. It’s a plateau mountain that rises from the desert like something not entirely natural. Enhancing the supernatural feel are the miles of fossil trenches around it. Hundreds of people labor in cooler months here, but in summer they depart for the Rif and leave their tools by the sides of the trenches for months at a time, undisturbed by even the wind. The effect is eerie. Circumnavigating the mountain by Jeep provides access to a ramp-like track that leads up to the top—a rough wadi that requires strong tires.

The drive across this plateau is remarkable, since it is road-less, off-the-grid, and bare. On the far side, another wadi leads down to a series of oases that are dying from the gradual encroachment of Bayoud’s Disease, which afflicts palm trees. At their edge lie tiny hamlets devoted to fossil mining.

Their houses are often shaped like eggs, with metal doors brightly painted with images of trilobites. Visible above, on the looming, almost menacing cliff faces, are the caves where locals hack away for the precious fossils, each one trailing ropes. With a bit of courtesy, its possible to spend the night with a local and watch the diggers set off at dawn. But by ten, in summer, the heat is unbearable and those not working in the caves will stay indoors.

The drive to and from Issomour is as remarkable as the mountain itself. Along the roads are fossil prepping shops and quarries; the pretty village of Alnif boasts a beautiful "bab" or gate. Closer to Erfoud, you will even find unexpected lakes with flamingos. This is the eternal desert, untouched by the mega-resorts now springing up everywhere around Saharan towns.

Lawrence Osborne is the author of one previous novel, Ania Malina, and six books of nonfiction, including the memoir Bangkok Days. His journalism and short stories have appeared in the New York Times Magazine, the New Yorker, Newsweek, Forbes, Tin House, Harper’s, Conde Nast Traveler, and many other publications. Osborne has led a nomadic life, residing for years in France, Italy, Morocco, the United States, Mexico, and Thailand. He currently lives in Istanbul. His latest novel, The Forgiven was recently published by Hogarth.