Author Chris Pavone’s just-released espionage thriller, The Expats, is about an American abroad who finds herself in complex web of intrigue. The novel is set in Luxembourg, one of the smallest countries in Western Europe, where Pavone lived while researching and writing the book. Here, Pavone shares his top food finds in Luxembourg City.

Luxembourg is nestled between Belgium, Germany, and France, with a native language that’s a Flemish-Germanic dialect, and a city population that’s half expat. Which is to say that it’s a cultural hodgepodge, reflected in Luxembourg City‘s vibrant food scene. These are my top picks after more than a year of gastronomic research. 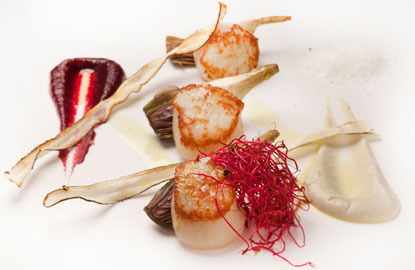 Luxembourg possesses Michelin stars well out of proportion to the grand duchy’s size—more per capita than any other country in the world—and my favorite among them is Mosconi, a supremely elegant Italian restaurant situated in a manor house on the river banks down in the picturesque neighborhood of Grund (“ground”), with sublime food and impeccable service. 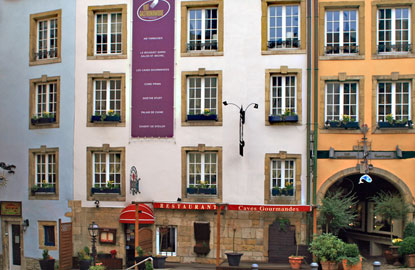 Am Turchen (“the Turret”) is the name of this beautiful old building that now houses Ilôt Gastronomique (rue de l’Eau), a vertical mall with a half-dozen restaurants, including the elegant Michelin-starred Le Bouquet Garni and, in the city’s former salt cellars, the rustic Caves Gourmandes, as well as a couple of local stalwarts and a shifting assortment of international offerings. 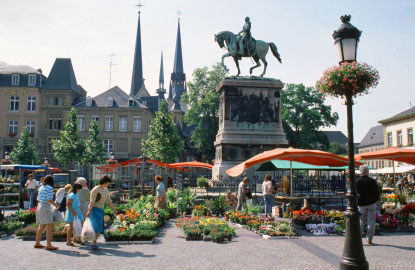 On Wednesdays and Sundays at Place Guillaume II, local and international vendors peddle their wares in the large central plaza. I’m partial to the free-range rotisserie chickens and the luscious potatoes that cook under the chicken’s dripping fat; the French guy with the great Alpine cheeses of the Haute Savoie; the couple selling the cured meats of the Tyrol; and the woman with specialties from Bretagne.

On one side of the passage de l’Hôtel de Ville (connecting the two main squares, through a building) is Kaempff-Kohler’s enticing specialty-foods shop and casual restaurant; on the other is its cheese and wine store, perfect for a boozy, cheesy lunch. There’s nothing about this place that isn’t great. 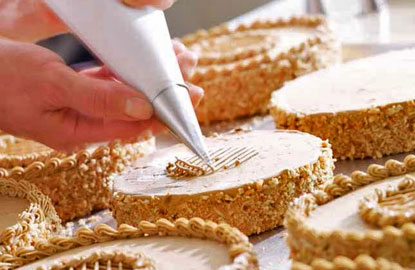 The city is practically overflowing with high-end chocolatiers, many of them with tea rooms as well as enticing counters, and the most renowned is Namur, a national institution in the heart of the shopping district. Bizarrely, the founder Nicolas Namur had emigrated to America in 1851, but returned to Luxembourg during the Civil War and opened up his first pâtisserie in 1863. 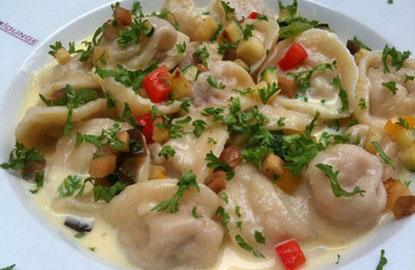 For my money, the best espresso-based coffee in town is sipped at Coffee Lounge, which has a staff friendly and was accommodating enough to let me hang out there and write a book. They also serve bagel sandwiches and a hot plat du jour at lunch. 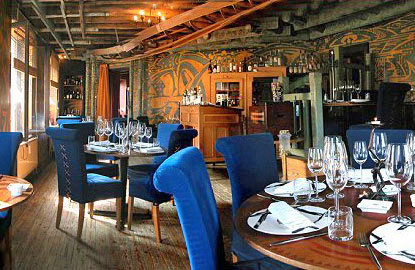 The pub-café is downstairs, while the white-tablecloth Chiggeri restaurant is upstairs and also in a small plaza across the street, at the edge of the cliff atop which the city is built. The restaurant has truly magnificent views to accompany the local and French menu. Plus, it boasts the largest wine list in the grand duchy. 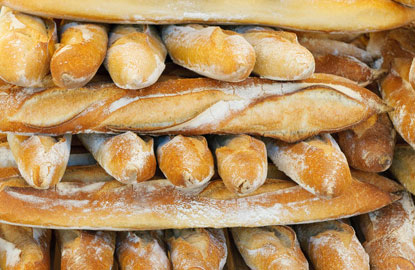 This charming bakery (22, rue Notre-Dame) is widely regarded as the best place for savory baked goods in town. 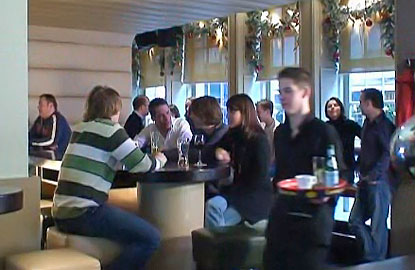 9. The Urban Bar and Restaurant

It’s certainly not haute cuisine, but The Urban serves good solid pub food in the most lively of the town’s expat bars, with a vibrant sidewalk café scene in the best possible location. 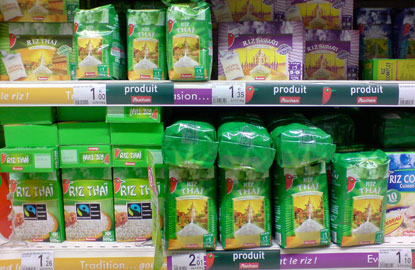 Auchan is a massive, intimidating supermarket—rather, hypermarché (hyper– is a step up super-). But it also has the largest, most interesting selection of food in the country, including a mind-boggling range of pâté (at least a couple dozen varieties) and a phenomenal assortment of everything worth eating.

Planning a trip to Luxemboug City?

Check out our guide to Luxembourg City for the latest hotel, restaurant, and sights reviews.

Chris Pavone was a New York City book editor for fifteen years, then moved to Luxembourg, where he started researching and writing The Expats, an espionage thriller set in the world’s only grand duchy. He now lives again in Greenwich Village and on Long Island, with wife and children.