News Apeksha Bhateja What Are the Chances You'll Get Monkeypox at a Hotel?
NewsLong Weekend in Sicily

An hour’s flight from Rome, Sicily makes the perfect holiday-within-a-holiday. (Or, obviously, a holiday all its own.)

Sicily is one of Italy’s two island regions, located off the boot’s toe and easily crossed by car or train in about three and a half hours. Its architecture and traditional cuisine bear the indelible imprint of its ruling invaders, including the Greeks, Arabs, Byzantines, Vandals, and the Normans. This small, triangular island tends to be several degrees warmer than continental Italy, making for an ideal beach getaway. If your idea of heaven sounds like awe-inspiring Greek ruins, impossibly blue waters, and heaping plates of sea urchin linguine, then try this mini Sicilian itinerary on for size. 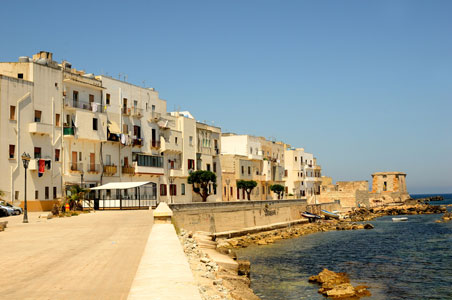 Fly into Trapani, a sickle-shaped port city located on the far west side of the island. Trapani was founded by Sicily’s indigenous Elymians but, like many cities in the Southern half of Italy, it is steeped in Greek myth; fabled to have been created by a falling sickle, dropped either by a distraught Demeter or a patricidal Saturn.

Stroll through Trapani’s city center to take in its Sicilian Baroque and Medieval religious architecture as well as its boutiques; Trapani is known for its exquisite coral crafts. Enjoy traditional cuisine, including Trapani-style pesto (tomato-based, served over thick, curly busiate pasta) and couscous with fish. For nightlife, visit Via Garibaldi, a long street lined with jumping nightspots and bars. Trapani is also home to a US Air Force base, so don’t be surprised if you find a little jumpsuit in your limoncello.

Where to Shop: On Via della Cuba, you’ll find Sicilian ceramics and whimsical housewares, or Coral Point, a boutique on Via delle Arti selling amazing coral-embroidered “paintings” and jewelry.

Where to Stay: Book a room at La Gancia Residence on Piazza Mercato del Pesce (across the street from Couscouseria by Bettina). Beautiful tile-lined ceilings, free internet, cushy beds, and an attentive, gracious staff. 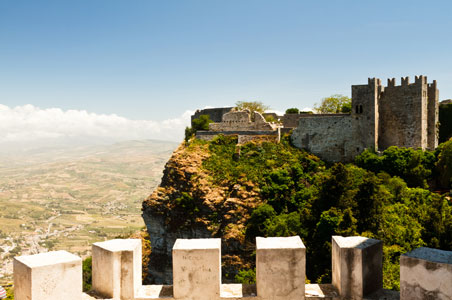 Once you’ve had enough of the local pesto, head up (way up) to Erice, a city with Elymian roots, impressive castles, and a Medieval ancient quarter that appears to have been made entirely out of stones. The trip up is a stunning 750 meter ascent—look down upon Trapani, sailboats, the Aegadian Islands, and the azure blue sea. Drive up, or from mid-March to mid-January, ride the cable car from Trapani.

Insider Tip: Bring an extra layer of clothing, since the wind can get fierce up at that altitude. Also, wear rubber-soled shoes, as the cobblestones of the ancient quarter are slick, and many of the old roads slope downhill.

Where to Eat: Don’t even think about leaving Erice without making a stop at La Pasticceria di Maria Grammatico for a crash course in all that is holy about Sicilian pastry. Try a Genovese—a custard-filled pastry pocket—or a handful of ugly, yet delicious belli e brutti cookies. Eat inside the pastry shop for visual access to the mouth-watering counter of almond and pistachio-laced sweets, or venture outdoors to the bakery’s tranquil garden terrace.

What to Do: Hike to Erice’s Spanish Quarter; a complex of barracks begun in the 12th century to accommodate Spanish soldiers but left unfinished when the troops changed course. 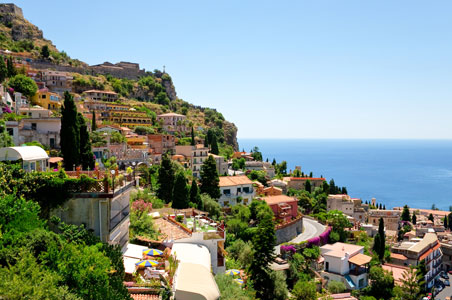 Taormina, a clifftop town on the Eastern coast of Sicily, is a jewel; small enough for locals to claim “you can’t get lost,” but so rich in beauty and culture that getting lost there wouldn’t be half bad. The city center is bursting with energy and style; hip boutiques, cafes, and nightspots offering live music. Fuchsia flowers spill over the Medieval buildings, and the town’s principal piazzas offer views of the sea and Mt. Etna, hulking in the distance. Stroll down Corso Umberto, the town’s fashionable main drag, and take a sharp detour down an unassuming alley, leading to luxurious public gardens and a monstrous Greek amphitheater.

Where to Eat: Rosso Peperoncino on Via Sacramento for fantastic whitebait fritters, Sicilian-style calamari, and fresh orange and fennel salad. Il Tiramisu on Via Cappuccini serves exquisite marinated tuna carpaccio and sea urchin linguine. The latter is pricey at 24 euro, but so delicious you’ll feel like you’re ripping the place off.

What to Do: What would a weekend in Sicily be without hitting the beach? There are numerous fantastic beaches in the Taormina area, easily reachable by bus and cable car: white sands, beach umbrellas, that incredible blue water, and, of course, Speedos galore. Or head to nearby Giardini Naxos, a picturesque town boasting the ruins of Sicily’s first Greek colony. And if you’re feeling adventurous, Mt. Etna is just an hour and a half away from Taormina. Day-trips and excursions leave regularly.