Barcelona offers up the perfect ingredients for an extra-long weekend escape: culture, history, a vibrant dining scene, and the beach. Although it would be impossible to see everything that Barcelona has to offer in just a few days, here are a few satisfying musts to knock off your checklist. 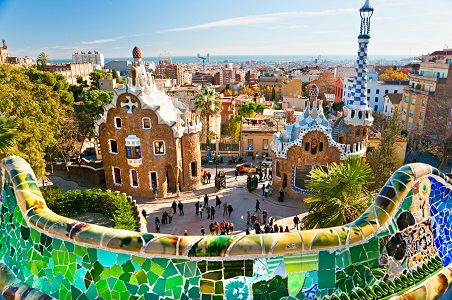 It’s virtually impossible to ignore the presence of architect Antoni Gaudí in Barcelona, and who would want to? Set aside an entire day to explore his architectural feats, starting off at the northern part of the city at Parc Güell. Originally designed as a gated residential community, this lush park of trees and clearings, tiled benches and lizard statues, overlooks all of Barcelona.

Continue on with a tour of one of Gaudí’s most sensuous works, the Casa Milà, where a staged apartment depicts family life from the early 20th century. Nearby, you can tour the interior of Casa Batlló, but what really stands out is its facade, covered by a mosaic of blue and green tiles said to represent the surface of the sea.

Finish off with a stop at Gaudí’s unfinished jewel, the Sagrada Família. Still under construction after 130 years, this massive cathedral comprises Gaudí’s most significant project, and is considered one of the world’s most unique places of worship.

The Barrio Gòtic and Born districts mark the oldest parts of Barcelona, with most buildings dating back to at least the 14th century. The best way to explore these areas is on foot—try a free walking tour from Sandemans New Europe Barcelona. Their knowledgeable guides give a well-rounded history of Catalonia, in addition to showcasing some of the major architectural sites like the Catedral de la Seu, Generalitat, Santa Maria del Mar, and even a glimpse at Barcelona’s Roman ruins. 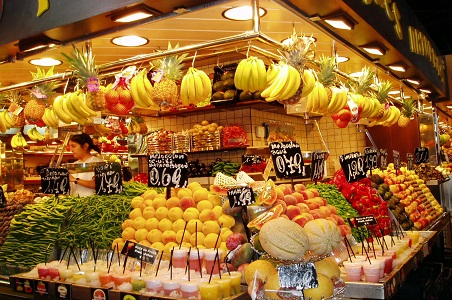 Set just off of La Rambla, La Boqueria marks Barcelona’s largest and most diverse food market. The open-air market is a feast for the senses, where hungry travelers and locals can pick up fresh fish, fine chocolates, and plenty in between. Hit La Boqueria early in the morning to avoid crowds and to fuel up on fresh juices. As you stroll, pick up snacks along the way like dried fruits, jamón pintxos (ham tapas), and turrón—a Spanish confection made with honey, sugar, egg whites, and toasted almonds. The market also features a culinary school where foodies and professionals alike can sign up for a wide array of food-focused courses.

Tucked into a corner of Barrio Gòtic, Allium specializes in slow-cooked, traditional Catalan and Mediterranean cuisine. All of the restaurant’s ingredients are local and seasonal, and the menu even dabbles in a few Asian- and Italian-inspired dishes, like the Thai skewer tapa or the cannelloni Allium. If you want to stick to Spanish and Catalan favorites, try the grilled Galician octopus for a starter, seafood paella as a main dish, and then crema catalana cremada for dessert. For lunch, Allium offers a $20 menu del dia that includes three courses, a beverage (including wine), and coffee. 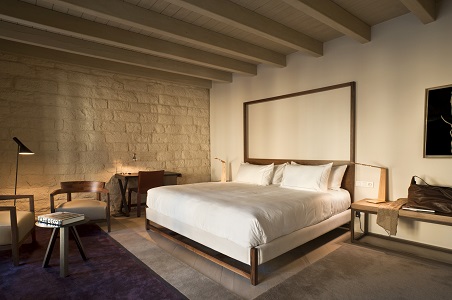 Set deep in the twisting Barrio Gòtic labyrinth is the posh Mercer Hotel Barcelona. Opened in September 2012, the 28-room Mercer is housed in a restored historic building that contains part of the Roman walls of the ancient city of Barcino, which date back the 1st century. The medieval facade of stone archways and wooden doors gives no indication of the modern amenities just inside: elegant guestrooms with vaulted ceilings; fine-dining establishment Mercer Restarurant; tapas tavern Le Bouchon; classic cocktail bar Negroni; and the rooftop Mercer Terrace and pool.

You’ll instantly relax upon stepping into the lobby of Hotel Omm, located just off the Paseo de Gràcia, the artery of the glitzy L’Eixample neighborhood. The welcoming, open space is a gathering place for locals and tourists alike for drinks at the sleek Roca Bar or a gastronomic feast at Michelin-starred restaurant Roca Moo. Laid-back travelers (or those in need of a shot of serenity) will love Hotel Omm’s minimalist design, as well as the Southeast-Asian inspired spa, Spaciomm. Treat yourself to a personally designed deep-tissue massage, followed by a dip in the indoor whirlpool.

Madrid-based freelance writer Shayla Martin covers cuisine, culture, hotels, spas, and destinations. She is the founder of YourLandMyLand, a travel and lifestyle blog that inspires solo, immersing travel experiences around the world. Follow her on Twitter and Instagram @Yourlandmyland.