News Ronny Maye Should You Cancel Your Vacation to an Area Impacted by a Natural Disaster?
NewsSo Many Lighthouses, So Little Time

So Many Lighthouses, So Little Time

There are roughly 700 lighthouses in the United States. On August 7, these beacons of light will be honored with National Lighthouse Day, a special day when select lighthouses around the country will be open for touring. Folks in the Northeast will get another chance to lavish praise on these enigmatic structures with the upcoming New Jersey and Maryland Lighthouse Challenges — a fancy way of saying you can tour the best lighthouses along the Jersey and Maryland shores and get a souvenir of the experience. Read on for details. 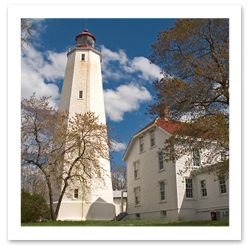 The New Jersey Lighthouse Challenge will be held this year on October 20 and 21. The challenge encompasses 11 lighthouses, including Barnegat Light, Sandy Hook, and Twin Lights. Volunteers will be on hand at each lighthouse from 8 a.m. to 6 p.m. each day to answer questions and hand out souvenirs. (If you visit all 11 landmarks you’ll get an extra special token.) Night climbs have been scheduled from 6 p.m. to 8 p.m. on Saturday night at Sandy Hook, Tucker’s Island, Absecon, Cape May, and Tinicum, and special tokens will be given out at each climb. Some lighthouses require admission; at others a donation is requested.

At 165 feet, Barnegat Light (609-494-2016), located on the north end of Long Beach Island, is the second-tallest lighthouse in the United States; Cape Hatteras Lighthouse in the Outer Banks of North Carolina is the tallest at 200 feet. It’s easy to spot because the top half is red while its bottom half is white. The original lighthouse went up in 1824 but it was rebuilt in the late 1850s.

No one seems to know exactly why the two towers of Twin Lights (732-872-1814) are so different, but they know why there are two towers — to distinguish the light from nearby Sandy Hook, of course. The towers overlook the Shrewsbury River, Raritan Bay, New York skyline and the Atlantic Ocean, and on a clear night you can see the top of the Statue of Liberty (with binoculars anyway). Feel like climbing the towers? That’s nice. Just remember that there are 64 steps in the north tower and 65 steps in the south tower. 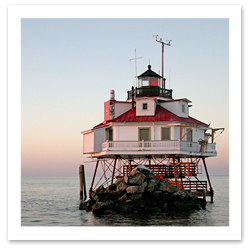 The Chesapeake Chapter of the U.S. Lighthouse Society hosts its fifth Maryland Lighthouse Challenge on September 15 and 16. There are nine historic lighthouses (and one lightship) on this year’s tour, including three of the best — Thomas Point Shoal Lighthouse, the Sandy Point Lighthouse, and Baltimore Harbor Light. Volunteers will be on hand at each lighthouse from 8 a.m. to 6 p.m., and commemorative magnets will be given out at each stop. Those folks who visit all nine lights will be honored with a special magnet. Again, some lighthouses are free; others charge a nominal fee.

Thomas Point Shoal Lighthouse (www.thomaspointlighthouse.org), a Chesapeake Bay icon and National Historic Landmark, is one of the most recognized lighthouses in the country because of its unique location (in the middle of the bay) and its hexagonal shape. The lighthouse was manned until 1986, but continues to light the bay today. (photo, right)

The Sandy Point Lighthouse (www.cheslights.org/heritage/sandy-pt.htm), located about 3,000 feet into the Chesapeake Bay, just east of the Sandy Point State Park beach, is not exactly traditional in style. Built in 1883 upon a 35-foot-diameter, cement-filled cast-iron cylinder, the house itself is octagonal in shape and made of brick, making it hard to miss when you’re traversing the Chesapeake Bay Bridge. The lighthouse is closed to the public, but can be easily viewed from the beach. (Token hounds can collect the Sandy Point token at Baltimore Harbor Light.)

It took 18 years to build the Baltimore Harbor Light (www.baltimorelight.org) back in the late 1800s. It was also the last lighthouse built in the Chesapeake Bay, and some say it was the most difficult. In 1964, a nuclear reactor was fitted to the light, but it was removed a year later.

Ever wanted to play keeper for a night? Okay, the chance of that is slim, but according to the United State Lighthouse Society, civilians can rest their heads in lighthouses in California, Maine, Massachusetts, Michigan, Minnesota, New York, Oregon, Rhode Island, and Washington. If you’re looking for an international adventure, there are two lighthouses in Newfoundland, and one on Prince Edward Island and one in Wales, that open their doors to guests.