When I was younger I spent a few hazy days in Amsterdam. My memories were mainly of scruffy students and inclement autumn afternoons. So, when Monsieur suggested a long-weekend in Amsterdam in November, I was a bit ambivalent, not to mention unsure of what to pack. 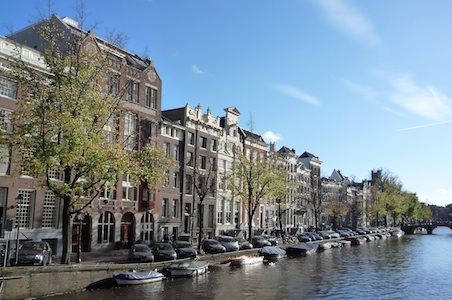 Trying to work out what to bring, I became obsessed by Amsterdam’s forecast on my weather app before our trip. As is often the case with Northern European cities at this time of year, the forecast (and icons on my app) changed constantly, with mild outlooks turning blustery one minute and downpours yielding to sunshine the next. The "just in case it… [rains/is t-shirt weather/snows]" factor threatened to make packing a pain.

I started, as I usually do, by plotting our schedule with sketches of possible outfits. Our itinerary included dinner at an amazing Indonesian eatery called Blauw; a rather formal dinner at our hotel’s highly acclaimed traditional Japanese restaurant, Yamazato; a visit to the Anne Frank House and various stops at other museums and points of interest—all on a rented tandem bicycle. Amsterdam is seemingly built for cyclists and Monsieur—a keen rider—wanted to take full advantage of the city’s famous bike lanes, especially since our hotel, the five star Okura, is set apart from the city centre. So much for stilettos and door-to-door cabs: My packing list would have to be weather-adaptable and practical for pushing those pedals.

Cue, three of my best wardrobe buys in recent years: a reversible Max Mara coat with insulating alpaca on one side and rain-proof fabric on the other; a plush Crimson Cashmere poncho for extra warmth; and a pair of flat knee-length leather boots which can be worn as easily with skinny jeans as with a skirt. Thanks to these three staples (the boots having been bought in a last minute panic just before we left) I was able to throw just a couple of items into my little red Rimowa, confident that I’d be comfortable—and fashionable—whatever appeared on my phone. 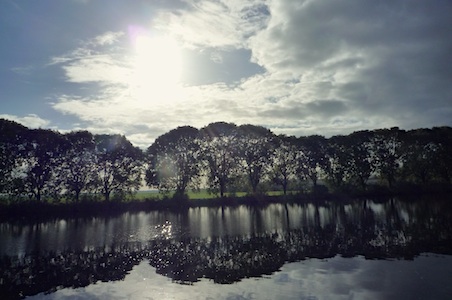 Despite an app that threatened rain, we arrived to sunshine, the clouds having been blown away by a frosty northern wind. (Weather: 0 – Poncho: 1) We picked up our tandem at Damstraat Rent a Bike and cycled around town, taking in the 16th & 17th century architecture along the canals. For lunch we stopped at Gartine, an adorable little hole-in-the-wall serving homemade dishes, often made from ingredients picked from the owner’s organic garden. After a generous salad and a hefty slice of espresso cheesecake, I was quite happy to burn calories on our tandem—and happier still to do a few laps in the Okura’s magnificent swimming pool later that afternoon.

If at first the Okura’s less-than-picturesque situation was disappointing, its luxurious amenities, health club, and restaurants quickly won me over. In fact, as the weekend progressed I appreciated the distance from the crowds of bleary-eyed backpackers that crowd central Amsterdam. Instead we explored nearby neighbourhoods, including De Pijp with its trendy boutiques, cafes and daily market, where Wally’s Waffles is found. Our tandem gave us easy access to all parts of the city as well as the countryside beyond, where a path along the Amstel River led us past windmills and villages hearkening back to the Rembrandts in the Rijksmuseum. 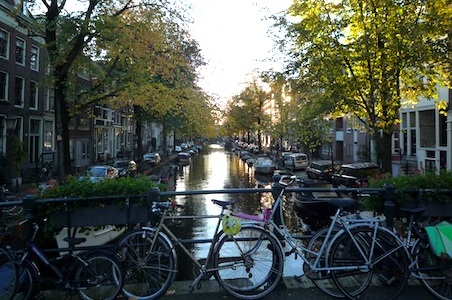 Back in town we got our history fix at the Het Scheepvaartmuseum Maritime Museum which included a childishly thrilling visit aboard a reconstructed 18th century trade ship. The Anne Frank Museum was as moving an experience as I’d expected it to be, even if the enormous queue to visit her tiny annex didn’t seem to move at all: I’m glad I’d bought our tickets online first. And though not exactly educational, the Cheese Museum (across the canal from Anne Frank Huis) provided us with some of the best wedges we’d ever tasted.

As for my packing list, it couldn’t have gone better. One day dress, two night-time dresses, some skinny trousers and a couple of sweaters were all I needed under the coat, poncho, and go-with-anything boots. And the jacket that I bought at Ready to Fish, one of Amsterdam’s coolest boutiques, was a brilliant bonus and suitable souvenir from a city which I managed to warm to, despite the season’s chill.