News Apeksha Bhateja Europe's Airports Are Chaos This Summer. And Now There's Another Problem
Home  >  News   >   Just Back From: Diving in Egypt

Just Back From: Diving in Egypt 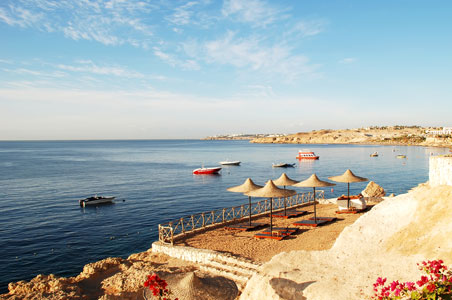 The Red Sea is a Mecca for divers and snorkelling enthusiasts from all over the world. Second only to the Dead Sea for its salinity, the excessively salty water retains heat year-round allowing around 1,800 species of tropical fish to thrive amongst its coral reefs.

I have always been of the opinion that package holidays are to be avoided like the plague—where is the traveller’s sense of adventure? Their intrepid independence? Their individuality and freedom to choose? But all this was cast aside by the difficulties, and extra cost, of independently booking a week’s diving holiday in Sharm-El-Sheik, Egypt.

Our hotel had a private beach with a floating jetty extending over the coral reef, so we were just one jump away from our face-to-face experience with Nemo (a two-banded clown fish, of course) and his colorful friends. Shoals of fish frolic around the snorkelers, weaving up, down, and over the coral growth, oblivious to any (absent) dangers. To them, we are simply larger than they are—I spotted one globe-fish (or puffer-fish) approaching a couple on the jetty, and raising its head for a picture!

The diving trips give similar delights at depths of up to 100 feet. Our first, a shore-dive, from the same jetty yielded a large crocodile fish lying flat on the sand bed at almost 60 feet, as well as an abundance of butterfly and Napoleon fish, the latter’s name coming from the hump on their brow, similar to Bonaparte’s hat (he was the grumpy one in Nemo).

The next day’s we were at Jackson and Gordon Reef, near Tiran Island. Things move slowly in Egypt, so despite an early start we found ourselves waiting at the port of Shark’s Bay—not a problem at all, the clean water meant that we could don our masks and enjoy a quick bout of snorkelling. A short boat trip then took us to the reefs, where there was much excitement as we descended with scuba tanks on our backs—an eagle-ray was passing by, flapping its large wing-like fins. He was eclipsed shortly after, when we came face to face with a two-foot turtle feeding off the coral. The reason for this proliferation of aquatic life? The strong current was sweeping us along, requiring no effort to follow the wall. We just relaxed and enjoyed. 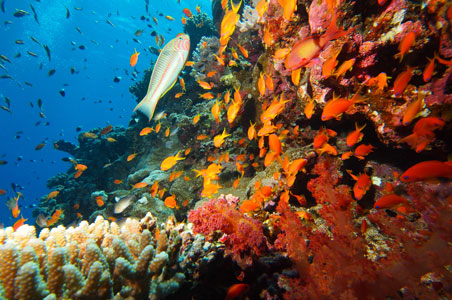 Day three was in the Ras Mohammad National Park, at the mouth of the Gulf of Suez. This unspoiled marine reserve hosts over 220 species of coral, and our eyes were peeled as we dived first Ras Za’atar, then Ras Ghozlani. Spectacular colors with the sun illuminating the sandy bed gave the perfect backdrop to the transparent fish who swam above, below, and alongside us. And look! There goes a moray eel, mouth agape…

And then came the mother lode, the most popular diving destination in the Red Sea. The British ship SS Thistlegorm was sunk by German bombers in 1941, and lay undisturbed on the seabed for over a decade until discovery by intrepid French aquatic explorer Jacques Cosuteau. It was subsequently forgotten until the early 1990s, when Sharm-El-Sheik became a popular diving destination. This underwater military museum has been left almost untouched, with its cargo of trucks, motorcycles, and even a locomotive easily explored by anyone with a scuba certificate.

A five hour boat ride from Sharm (with an unpleasantly early morning start), the site is beyond compare—our first descent took us around the external part of the ship, with a close look at the effects of the bombing. The second dive toured the interior, from the cargo of trucks (complete with wellington boots lying on one driving seat) to the captain’s bathroom. Lionfish, with manes of fins, gaze at you nonplussed as you shine your torch around the hold. Spectacular.

The diving certainly lived up to, and went beyond, expectations, but what of the hotel? All-inclusive package holidays by their nature constrict you to what the hotel has on offer. We stayed at the Royal Grand Sharm—full marks for the location, right on the beach (an essential requirement, particularly for non-divers), and the staff were always friendly, jocular, and efficient—however the same bland food day in, day out soon begins to rankle. The guests at our hotel were predominantly Russian, and seemed to enjoy the free cocktails (made with substandard mixers) more than we did. The entertainment provided is geared for families; we, instead, found it fun to take a short taxi ride (negotiate the price first, and be firm) to nearby Naama Bay, where two long streets lined with exciting bars lead to the renowned Pacha nightclub, where revellers choose between the dance floor or the small swimming pool, with gyrating dancers performing far above their heads.

The travel agency will also encourage you to take one of their organised excursions, claiming only they are insured, but shop around and you will find the same trips at less than half the price, insurance included.

Despite these reservations, the all-inclusive package remains the cheapest and most convenient option for a truly unforgettable diving experience in the Red Sea.