News Ronny Maye Should You Cancel Your Vacation to an Area Impacted by a Natural Disaster?
NewsInsider’s Guide to Taormina, Sicily

“Sicily is not Italy,” a Sicilian once told me. “We are unified with Italy, yes, but this”—here, he swept his arm across, as if to encompass all 10,000 square green, blue, and mountainous miles of the Mediterranean island—”is something entirely its own.” That outlook, one that has defined Sicily for centuries, is apparent after only a few days, especially in Taormina, the island’s prized jewel on the rocky eastern coast between the big cities of Messina and Catania. Old, regal, and still gleaming after decades of literati have trod across its cobblestones, Taormina enchants in a way all its own. Here’s how to do the city in style. 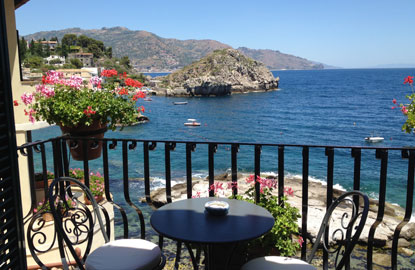 The view alone—a crescent coastline cradling the sapphire Bay of Naxos, Etna in the distance—is worth the price of admission to the Grand Hotel Timeo, a stunner set in an evergreen grove at the foot of Taormina’s famous Greek Theater (rates from 350 Euro). The vista has been enchanting guests since 1873, when Timeo’s five original guest rooms served as a rest stop between Messina and Catania. Since then the hotel has grown into 70 rooms and suites (all of them refreshed as part of a three-year renovation under Orient-Express, owner since 2010) and become Taormina’s de facto destination for discreet luxury. . (See Luigi in the bar for an expertly mixed Negroni.)

Purple bougainvillea clamber down the Timeo’s terraced hillside, and suites follow suit, maximizing the bay views from their balconies (pictured). After a passegiatta through light-washed lounges and bust-lined halls, head to the pool for a cushy sun bed, slushy cantaloupe granite, and more jaw-dropping views.

Just ten minutes down the mountain, Timeo’s sister property, Villa Sant’Andrea, opens onto pebbly Mazzaró Beach (rates from 355 Euro). White umbrellas pop on the hotel’s private lido, shading loungers from the powerful Sicilian sun. A convenient shuttle links Sant’Andrea with the Timeo—if it’s overbooked, they’ll call you a cab, and pick up the bill—and guests share amenities between the two. Champagne, red prawns, and sea urchin at the Villa’s “Sea Time,” a Sicilian take on English tea time? A tour of Savoca, the town where Francis Ford Coppola filmed The Godfather, in a vintage Fiat 500? Complimentary excursions on the private yacht along the blue, mountain-framed coast? It’s all for the taking here.

Villa Sant’Andrea’s rooms were also renovated and gorgeous views of the Bay. Wandering the Villa (and this is an actual villa, built in 1830), you never know what surprise nooks and alcoves you might discover—but try to find the one with the arched windows and fuchsia armchairs near the ornate fireplace. 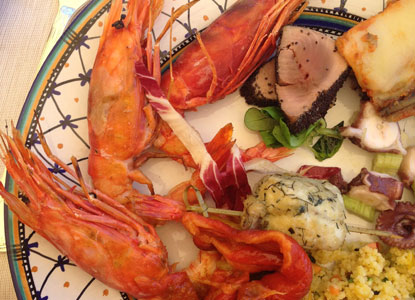 Etna’s mineral-rich volcanic soil births some of Italy’s finest produce: citrus, prickly pears, huge figs, pistachios, almonds, super-sweet eggplant, and wild fennel, just to name a few. Add the bounty of the Bay of Naxos (bass, swordfish, lobster, anchovies, sardines, a dozen species of shrimp), and it’s no wonder Sicilian chefs brag that they have access to the freshest, most vibrant ingredients.

The main eateries at the Sant’Andrea and the Timeo, Oliviero and The Restaurant respectively, are among the best places to dine in Taormina. Order the branzino, salt-baked or Mediterranean-style, from the former, and the nightly tasting of crudo from the latter. (Ask for Veronica, the Timeo’s sommelier, for spot-on advice on Sicily’s lesser-known wines.) Just off Corso Umberto, family-run Maffei’s is the place for toothy pasta with traditional accompaniments like sardines, seppia ink, and bottarga—reserve a table outside, beneath a canopy of trees—while La Botte’s wood-burning oven turns out devour-able pizzas draped with speck and sopressata.

Sicily has an undeniable sweet tooth, a vestige of the island’s conquest by the Arabs, who taught the locals recipes using honey, spices, citrus, and nuts. The tradition endures at bakeries like Pasticceria Chemi and Pasticceria Minotauro, where cookies, candied orange peels, and bars of pistachio torrone are sold by the kilo. Gelato abounds as well, from proper parlors like the modern Gelatomania and kiosks lining Via Teatro Greco. But to do dessert like Sicilians, it’s got to be granita, preferably in a split brioche with whipped cream. Bam Bar makes Taormina’s tastiest ice, in flavors organized (and available) by month. Hope you’re visiting during strawberry season; their fregola granita tastes as deep and pure as its stark magenta hue.

The high season in Taormina means that you’re sharing the views with everyone—double decker bus-loads of people pour into town and into shops brimming with Godfather aprons, lemon magnets, and knockoff sunglasses. But look closely; for every cheap souvenir store, you’ll find half a dozen boutiques selling artisanal goods.

And there’s no better place to be when caught in the middle of an international film festival with nothing to wear; preppy yacht-ware at Paul & Shark, color-blocked Euro ensembles at Daniele Alessandrini, and snug, shimmering Brioni blazers at Conti will help you keep pace with the alarmingly well-dressed Italians. Jewelry hounds complete the look with glittering polished stone necklaces gallery Circe Expo.