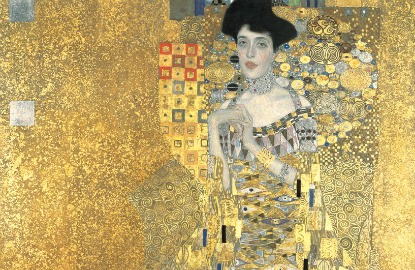 Anne-Marie O’Connor, author of newly released book The Lady in Gold, about the inspiration behind Klimt’s masterpiece portrait of Adele Bloch-Bauer (pictured above), shares her top places to visit Klimt’s artwork on his 150th birthday.

Vienna has declared 2012 the year of Gustav Klimt, making it one of the best times ever to view the work of this celebrated Austrian painter, whose arresting portraits and lush landscapes are on public view from New York to Vienna.

Klimt-lovers can begin in New York at the Neue Galerie, housed in the old Vanderbilt mansion, the home of the dazzling gold portrait of Adele Bloch-Bauer. This portrait, inspired by the image of Empress Theodora of the Byzantine mosaics at Ravenna, marks the debut of Klimt’s “painted mosaic” style. In more recent years, this portrait has come to embody “Klimt’s Women,” the unique group of women who were the artist’s intimate friends, and in some cases possibly lovers—as well as supporters of early modernism in Vienna.

A magnitude of Klimt’s work can be found in Vienna, where he spent most of his life. The Belvedere Museum, in the Imperial palace of Prince Savoy, on a hill overlooking Old Vienna, holds the largest collection of Klimt works in the world. The baroque architectural marvel is the home of works from Klimt’s gold period, like “Judith” and “The Kiss”, as well as “The Bride,” “Adam and Eve”, and some of his most vivid landscapes.

“Life and Death” is among the vibrantly colored Klimt masterpieces at the Leopold Museum, in the MuseumsQuartier, a lovely strolling district with cafes and restaurants.

In addition, the Secession Museum is the home of Klimt’s majestic Beethoven Frieze, one of the modernist works that shocked critics of the time, and the Wien Museum holds the largest collection of Klimt drawings.

Vienna has a yearlong agenda of special symposiums, shows, and events to mark the 150th anniversary of the artist’s birth. Visitors will also be able to access one of Klimt’s studios, a place that was saved from demolition to make way for a shopping mall by the efforts of Klimt’s grandson, Gustav Zimmerman.

One of the special exhibits opens March 20, when the MAK museum will open Expectation and Fulfillment, a show of Klimt’s cartoons for his famous Stoclet Frieze that will culminate with a celebration of the artist’s birthday July 14.

Those who wish to see Klimt’s progression as an artist can view his early decorative arts public works, such as the 1888 murals in Vienna’s new Burgtheater that won Klimt an award from Franz-Josef.

A special show of Klimt’s decorative arts works will also be at the Kunsthistorisches Museum from February until May 6.

Enter to win a copy of The Lady in Gold

Anne-Marie O’Connor attended Vassar College, studied painting at the San Francisco Art Institute, and graduated from the University of California, Berkeley. She was a foreign correspondent for Reuters and a staff writer for the Los Angeles Times for twelve years, and has written extensively on the Klimt painting and the Bloch-Bauer family’s efforts to recover its art collection. She currently writes for The Washington Post. Her book, The Lady in Gold, was recently published by Knopf.