Since it became legal for same-sex couples to get married in the state of New York (and hopefully will be in more states soon, given President Obama’s statement of support of same-sex marriage today), gay couples have been flocking over in record numbers to get hitched, and even honeymoon there. And the Big Apple isn’t the only place they’re heading. Popular upstate hotspots like Lake Placid, the Catskills, and Finger Lakes are seeing new highs in the “pink dollar”—so much that luxury resorts are catering specifically to the LGBT traveler with themed packages in hopes of voicing their acceptance.

Even gay-owned establishments (from bed & breakfasts to gay bars) are seeing more out-of-towners who want to immerse themselves in star-speckled night skies, farm-to-table restaurants, sprawling landscapes, and a burgeoning LGBT community. Whether traveling with a pack of friends or taking their partner for a romantic escape, visitors are now finding Upstate New York to be a convenient and memorable gay-friendly destination. 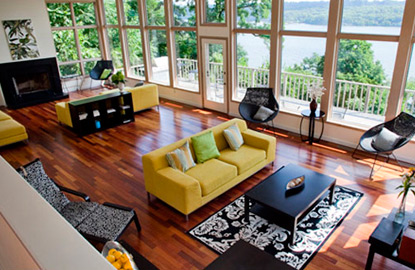 Why Go: This notoriously “hippie” college town in the Hudson Valley already has a thriving gay community. New Paltz‘s bohemian flair stands out, and travelers explore the Minnewaska State Park Preserve or Mohonk Preserve, both of which offer miles of hiking trails in almost 20,000 sprawling acres combined, as well as national historic landmarks including Huguenot Street.

Then, the most popular gay club around, Primetime—the largest in Hudson Valley— is over in neighboring Highland about twenty minutes away.

Where to Stay: Hit the charming, quiet streets to get acquainted with the town’s boutiques and intimate cafes. Stay at Buttermilk Falls Inn (rates from $300/night), a 75-acre estate that can’t get any more country chic. The historic house dates back to 1764, where guestrooms (as well as stand-alone cottages) are straight out of Town & Country magazine.

An onsite farm is home to sheep, peacock, llamas, and even chickens from whom the kitchen pulls their eggs. The mostly solar-powered spa features an indoor pool and solarium looking out into the Hudson, and New-Age-minded therapists can knock out a kink while giving you optional spiritual advice. Buttermilk is only fifteen minutes from New Paltz, and most visitors take the train from Grand Central Station. 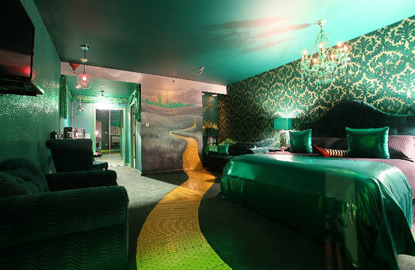 Why Go: Looking to buy a second home in Sullivan County? There’s a good chance your neighbors will most likely be gay. In fact, this quiet getaway from the city has been a favorite for the LGBT community for years (up to 70 percent of businesses in Narrowsburg Village alone are gay owned). There’s even a local magazine and a web site dedicated to the gay community.

While hiking and canoeing are top activities, Sullivan is more of a retreat for simply doing nothing at all, though people-watching is a favorite pastime—celebrities like Michelle Williams and Mark Ruffalo own homes here.

Get nostalgic at the Bethel Woods Center for the Arts, a contemporary museum that celebrates sixties history and the iconic Woodstock Festival (yes, it took place here in Sullivan, not Woodstock). The recently opened Dancing Cat Saloon and Catskill Distillery is a go-to for live music and Peace Vodka tastings (average main: $14).

Next door to the recently renovated Roxbury Motel (see below) is the gay-owned Public Lounge, a groovy restaurant serving farm-to-table dishes (average main: $11). It’s sprawling earth and all sky in this neck of the woods, so check out the popular Kaaterskill Falls or Alder Lake for picnics and hiking.

Where to Stay: Check into Bradstan Country Hotel (rates from $225/night), owned by a gay couple that officially got married last summer. The property looks over White Lake and is within walking distance to cute shops.

The truly remote, gay-owned Ecce Bed & Breakfast (rates from $200/night), though, is perhaps cream of the crop. The five-room hideaway is perched 400-feet high on a bluff overlooking Delaware River where eagles soar through the sky. Don’t let “B&B” fool you: it feels more like an intimate, boutique hotel with contemporary furnishings in all five guestrooms—some with private terraces or whirlpool tubs—and impressive antique pieces and local artwork in the public areas.

Gay New Yorkers may remember that in the 80s, Roxbury Village was the weekender from NYC. And while that trend died out, Roxbury is experiencing something of a renaissance. The Roxbury Motel (rates from $99/weeknight, $125/weekend night) is owned by a gay couple who are movers and shakers in the area. Last year’s brand-new wing brought 9 themed suites, each paying tribute to popular 60s and 70s TV shows and movies. Think Gilligan Island Suite and Wizard of Oz Suite, designed in a whimsical way (the owners’ backgrounds are in theater and set design). 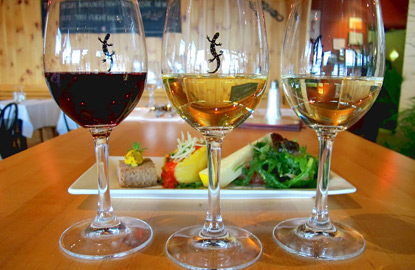 Why Go: The Finger Lakes— a whopping area of 9,000 square miles—is the largest wine-producing region east of California. Seneca Lake has the most wine production, including Chardonnay, Sauvignon Blanc, Merlot, Meritage, and a bestselling Riesling. Stop into Red Newt for a tasting, where the charming and young wine maker, Brandon Saeger, is openly gay.

Not an oenophile? Take a tour of Elmira town to walk the steps of Mark Twain who wrote the majority of his great works here. A comprehensive, guided tour of his study is offered. Gay-owned and -friendly Starlite Room features live music throughout the week. Or, if you need something livelier, Felicia’s Atomic Lounge (average main: $7) in Ithaca is where local students congregate.

Where to Stay: Couples stay in one of the 104 charming and well outfitted rooms at the Watkins Glen Harbor Hotel (rates from $250/night) just at the foot of Seneca Lake, and arguably the area’s most high-end establishment. 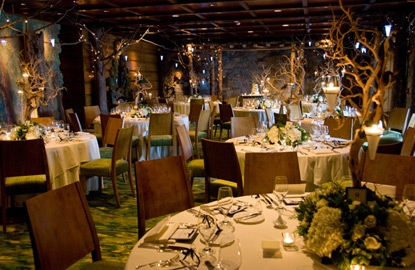 (5 hours by Amtrak or car from NYC)

Why Go: Nestled in the six-million acre Adirondack mountains, Lake Placid is a sleepy, bucolic town where locals and visitors alike appreciate four seasons: summer sun, spring mist, fall foliage, and snowy winters. It’s here the “Miracle on Ice” occurred for the 1980 Olympics and visitors can still check out the Olympic Park and hit some slopes at Whiteface Mountain.

Where to Stay: Check into Lake Placid Lodge (rates from $600/night), a Relais & Chateaux hotel, and home away from home for highbrow guests since its opening in 1882. It’s already been host to two gay weddings and countless newlyweds, thanks to its intimate, lakefront cabins and countryside allure.

Whiteface Lodge Resort & Spa (rates vary depending on season; start from $500/night) has 94 suites with the main lodge flaunting high ceilings, timber beams, and curious taxidermy. It has the only indoor/outdoor swimming pool in the area, in addition to an award-winning spa and two bowling lanes in their “lower trail.”.