A strange thing happened about a little more than decade ago when a veritable wave of big city businessmen, European artists, and Hollywood transplants descended upon this one-stop-sign town determined to breathe new life into Marfa.

Old hotels and motor courts got a hip new facelift, new spas opened up, and a flurry of gourmet-inspired restaurants settled in town ready to serve the growing influx of tourists adjusting their GPS’ to Marfa’s coordinates in hopes of unearthing exactly what is so special about this place. Which is exactly what I found myself doing in late May. My interests were particularly piqued by a special “Camp Cooking” workshop hosted by noted Texas chef Lou Lambert at the über-hip camping outpost El Cosmico. The weekend is a hands-on interactive course in understanding the best ways to plan, prepare, and cook outside—whether in the comfort of your own backyard or somewhere camping out in the great outdoors. Lambert is a seventh-generation cattle rancher with his family’s own McKnight Ranch located not 20 miles from town. While he still does his fair share of ranch management, by trade, he’s also a formally-trained chef who has worked in kitchens around the country, from New York to Los Angeles. Today, he owns Dutch’s Hamburgers in Fort Worth as well as Lamberts Barbecue in Austin. Inspired by summers on his family cattle ranch where the ranch cook prepared three meals a day for the ranch hands over an open fire, Lambert was moved to combine his classic training and his love for bold West Texas flavors into an instructive weekend for cooking enthusiasts and amateurs alike. Hosting the event at El Cosmico was no coincidence considering his sister, Liz Lambert, owns the eclectic outpost.

The weekend kicked off with a festive Tex-Mex inspired welcome reception on Friday evening on the El Cosmico patio with margaritas, pit-smoked pork tacos, chile rellenos in a sweet and spicy tomato broth, and a bottomless bowl of fresh guacamole. Lambert joined our workshop class of about 14 people to give us the plan for the weekend before we were given the evening off to stroll around Marfa. The crew headed to Padres, a popular local bar known for its burgers, local Big Bend Brewery beer on tap, and occasional live music sets on busy weekends. 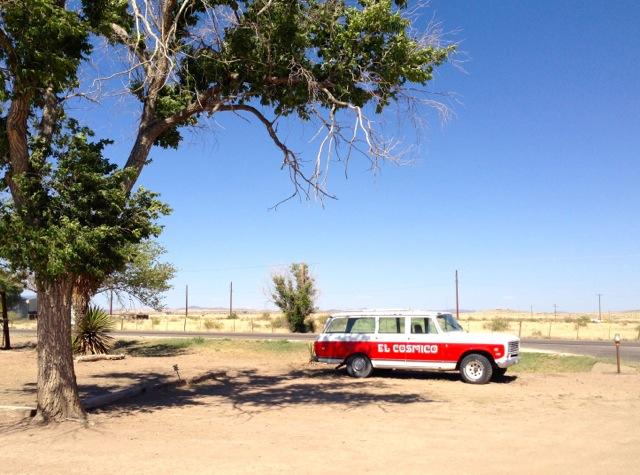 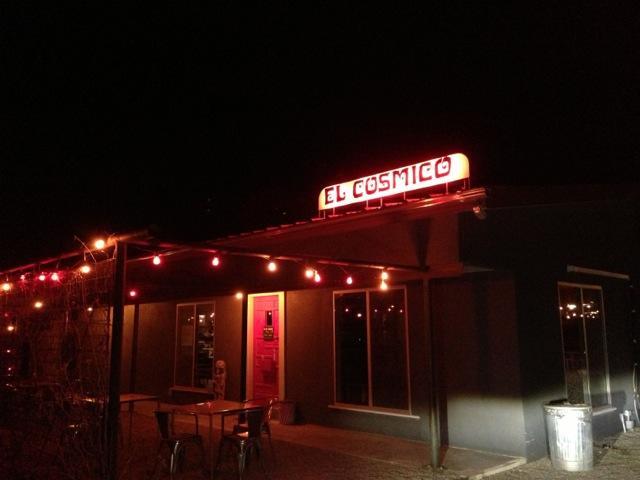 We stayed at El Cosmico, which itself has unique appeal. On site are a handful of refurbished vintage trailers, sturdy safari tents, a few large traditional Sioux teepees and a number of campsites for those who wish to pitch their own tent. It’s operated more or less as a camping ground, only with a few tasteful hotel amenities including plush beds with linens and towels for those renting trailers, safari tents and teepees. There is also a community bathhouse with showers, tub, toilets and sinks, a breezy hammock grove, and an outdoor kitchen with grills. The main lobby lounge has wireless internet and air conditioning—a God-send during the hot summer months. (Added bonus for trailer guests: your own outdoor shower and Mexican-patterned kimono robes.)

Chef Lambert started us out with a crash course in base sauces: fresh, homemade condiments that add flavor to his recipes. Ancho chiles, onion, garlic, tomato and a few key spices all came together with a quick pulse of a blender as we learned that this base seasons chicken tortilla soup and Tex-Mex fajitas—both of which were on deck for our lunch along with savory Spanish rice, drunken “borracho” beans and fajitas. Lambert and his team of sous chefs led us outside to a large fire pit ablaze with fiery charcoals and showed us how best to grill the meat and serve the chicken tortilla soup. As we literally ate through the classwork, Lambert’s baking expert gave us a demo on how to prepare griddle-top lemon pound cake, topped with fresh sautéed peaches. 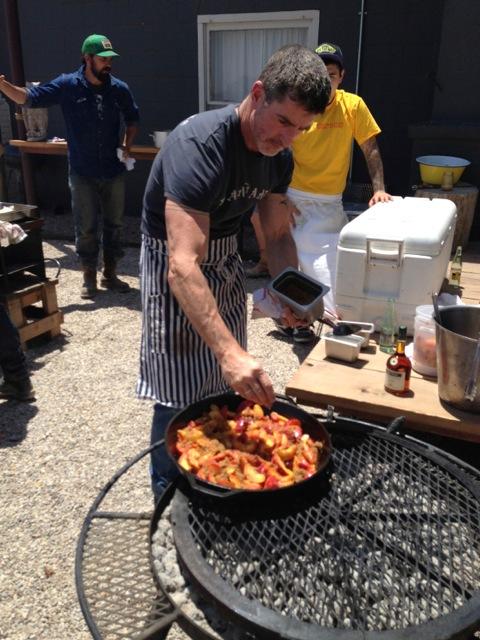 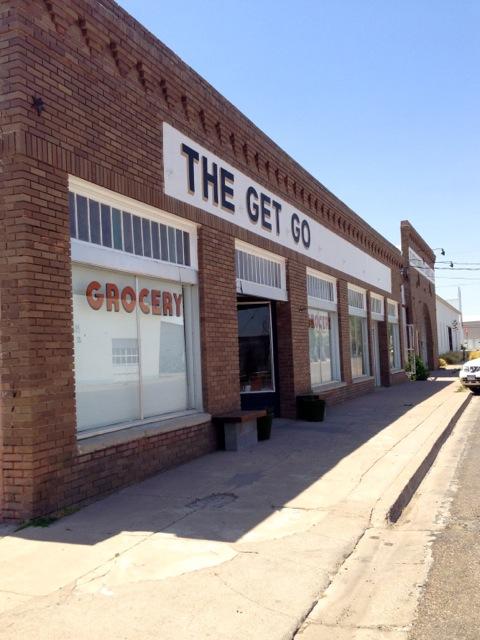 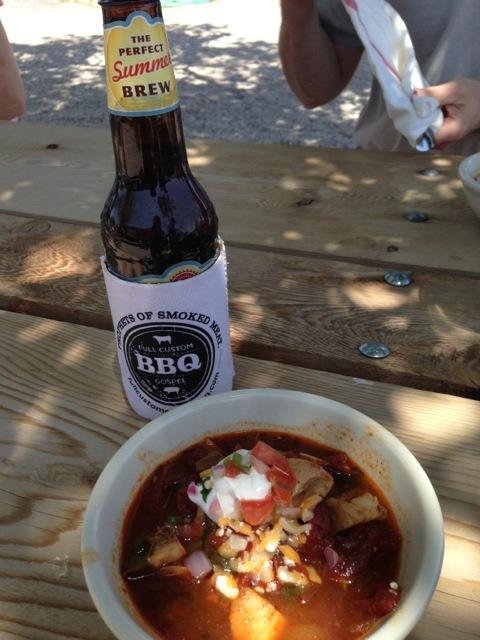 After class, wandering though Marfa, we learned that the key to enjoying the town is to “go with the flow.” Shops and restaurants post their hours of operation, but it’s entirely possible that any or all of these places may be closed at any given moment. If you consider the posted hours as more of a “suggestion” for when things might be open, you’ll set yourself up for less disappointment. With that in mind, it’s best to come here with a purpose. And that purpose should probably be a little more lofty than just hanging out around town or going to see the mysterious Marfa Lights. Instead, plan a trip when an event is in town such as the annual Labor Day weekend Marfa Lights Festival, the Marfa Film Festival, or one of these El Cosmico cooking weekends. Additionally, there are seasonal “Camp Build Design Adventure” workshops through El Cosmico that benefit the Marfa community. Our culinary workshop reconvened outside of town where Lambert graciously hosted us at the Bunkhouse of his family’s ranch for a cookout feast. We learned a few more valuable tips for cooking steaks, making summer sauces and how to bake homemade onion foccacia bread, and fresh apple crumble in coal-fired Dutch ovens. We dined on thick-cut ribeyes with sautéed mushroom and shallot relish, butterflied leg of lamb with jalapeño-green onion chimichurri, pan-roasted tomatoes, and grilled asparagus. Who said campfire cooking had to be boring?

Before we packed up to end our culinary adventure, Lambert and his crew dazzled us again with a full-scale campfire breakfast. He taught us how to whip up smoked pastrami hash and green chile cheese grits in a cast iron skillet; the key to poaching eggs in the outdoors; a secret recipe for campfire pancakes; and the best way to work the dough for perfectly flaky buttermilk Dutch oven biscuits. To say the weekend was an adventure in gourmet decadence is an understatement, but it was the perfect way to compliment the low key vibe of this artsy-yet-understated little town. The truth about Marfa, despite its handful of pop up galleries, sizzling food trucks, and tasty restaurants, is that this is still a West Texas outpost with not a whole lot going on. (Save for its beautiful desert vistas and breathtaking sunsets.) And for many, that’s its greatest appeal.