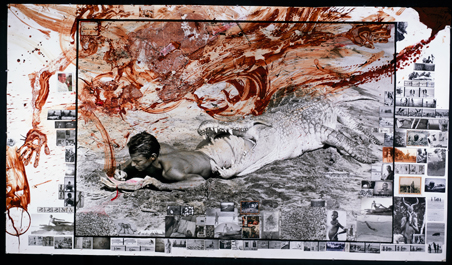 Photographer Peter Beard has been chronicling Africa since his debut almost 50 years ago with his groundbreaking book, The End of the Game. This gorgeous 1965 tome featured haunting images of wildlife from Kenya’s Tsavo National Park, where Beard worked from 1964 to1965 and witnessed over 35,000 elephants perish as a result of encroaching development and apparent conservation mismanagement. In 1966, Beard studied elephant and hippo populations in Uganda and from 1966 to 1968, he worked for the Kenya Game Department, researching the crocodile populations of Lake Rudolph, Kenya (this resulted in his next book, Eyelids of Morning: The Mingled Destinies of Crocodiles and Men.) 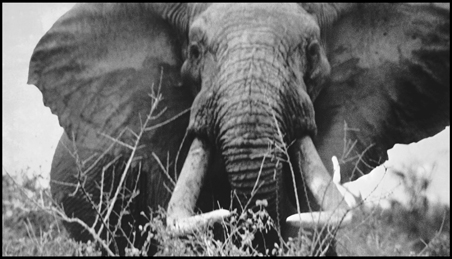 In addition to photographing African wildlife, Beard has snapped supermodels and rock stars, first ladies and pop artists. And he is perhaps just as well known for his exuberant party boy persona as he is for his iconic images and mixed media collages, some of which include splotches of the artist’s own blood. During Studio 54’s heyday, Beard traipsed around Manhattan—and, across the globe—with the likes of Andy Warhol, Mick Jagger, Jackie Onassis, Cheryl Tiegs (to whom he was married for five years), and Iman (the Somali model and actress whom Beard discovered while she was still a student at University of Nairobi.)

Jetsetting between his tented settlement, Hog Ranch, at the foot of the Ngong Hills in Kenya, his home on Montauk, Long Island, and his Manhattan apartment—where he now lives with his wife (and agent) Nejma and their daughter Zara—Mr. Beard is still going strong. (In fact, two of his pieces set records last year, selling in London and New York for over half a million dollars.) We caught up with Beard recently to ask him what drew him to Kenya, what he thinks about the current plight of the elephant, and his favorite places to eat and drink around the world.

You were born in Manhattan and attended Yale. What drew you to Kenya?

Charles Darwin’s great grandson, Quentin Keynes, was organizing a film about black and white rhinos in the Hluhluwe-Umfolozi Game Reserve in South Africa so I signed on in the summer of 1955. After a super rhino experience we traveled through Madagascar for National Geographic and then to Kenya. This was at the end of Mau Mau [Uprising]; we saw treetops burning in the Aberdares. 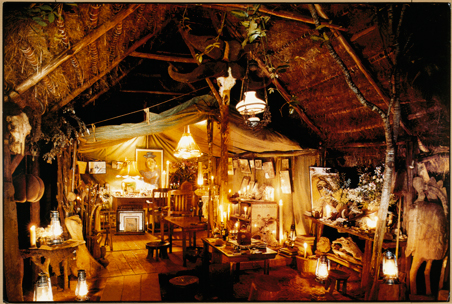 What exactly is Hog Ranch and what is life like there?

Hog Ranch, so-called due to the excessive number of warthogs, is a camp scene on 40 acres just outside Nairobi on Langata, the road to Karen Blixen’s old property. There are tents under makuti (woven palm) roofs and a studio and kitchen. There are also bushbuck, dik diks, suni, waterbuck, giraffe, and the occasional leopard and lion. One resident leopard ate my monkey, Northi-Chongo.

You’ve made the African elephant the subject of countless images as well as your now-legendary book, The End of the Game. What are your thoughts on the current plight of the elephant?

Elephants, like us, come under the category population pollution. Wildlife suffers overpopulation within limited and unnatural boundaries made by the expanding human populations that surround them with ditches and fencing. As I wrote in The End of the Game, long before European "game-savers" arrived on the scene, local tribes coexisted with the elephants. It was only when the traditional hunters were rounded up and imprisoned for "poaching" that the elephant population began to expand and that breeding, now unchecked, consumed the limited habitat. Then, the animal populations inside national parks—and human populations outside—surged, and old balances were tipped. Large, dynamic mosaics like Tsavo, with its 8,300 square miles, are now surrounded and infiltrated by hungry, traditional hunters and their innumerable relatives.

Tourists need to educate themselves as to the fate of [our planet]. The elephant metaphor is clear. The entire ecology of the elephant is more similar to us than any other animal. [Travelers to Africa should] avoid sentimental campaigns like "Buy a Lion an Acre" or "Buy an Elephant a Drink" because it’s really too late in the game. As Alistair Graham wrote in our book Eyelids of Morning, "All species of people and animals are relative to their time and circumstances… They can exist only on their own; they cannot be sustained or copied, or incorporated by another culture, however ingenious."

The Peter Beard Taschen Book, which is in its third edition. [The previous two editions sold out.] 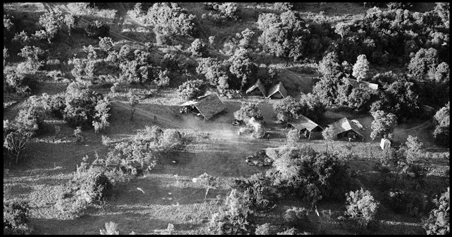 You have homes in Kenya, Manhattan, and Montauk, have traveled throughout Europe, and are known as quite the bon vivant!  What are your favorite places to eat (and drink) in any – or all – of these locales?

Living well is the best—and only—revenge. Manhattan had the 21 Club, [but] it’s over and out, passé. Trader Vic’s folded and moved out; Lüchow’s is gone. [Now] Nobu is the great new chain. The Russian Tea Room is coming back, and the Oyster Bar is still good. Next to perfect is Cookshop on Tenth Avenue. Amaranth is also a favorite.

As for Europe, Lumskebugten in Copenhagen is the best restaurant in the world! For hotels, D’Angleterre has shrimp cocktail with amazing sauce downstairs in the café. (The hotel is old school with huge bathtubs not to be found anywhere else.) In Rungsted [Denmark] Club Royal at the Royal Danish Yacht Club is really uniquely superb and right on the water.

What upcoming trip are you most excited about?

Abu Dhabi, Qatar, and Oman. It seems there’s a great interest in contemporary art there. Some of my Middle Eastern collectors go on safari in Kenya and Tanzania and they have an appreciation for cheetahs, lions, Great Bustard, and other species I’ve photographed. I’m planning a trip there soon.

Overcome jetlag, hope for a great meal, and talk to informed insiders about what’s available for the next adventure!