Family Marah Eakin Is It Remotely Possible That a Childless Adult Can Have Fun at Sesame Place?
PHOTO: Carl Yu

Sometimes all you need is a little time with man’s best friend.

“What kind of dog is this?”

“How much does he weigh?”

The stream of people who stop on their way in and out of LAX’s Terminal 1 to shower the amiable canine with affection is endless. As soon as it seems like it might be time to find a new spot, a fresh set of people are pausing to pet Truman and take selfies.

“I don’t think anyone in the history of the program has gotten to the end of the terminal,” says Heidi Huebner, PUP’s Program Director. Huebner started the program in 2013 when the only other similar program in the country was at San Jose International Airport (which came about as a way to ease passenger’s anxieties about flying in the wake of 9/11). But LAX’s version (which now boasts 115 teams and is looking to up that number to 120 by the end of the year) has come to serve as a blueprint for other airports looking to add therapy animals to their roster of amenities.

Family Marah Eakin Is It Remotely Possible That a Childless Adult Can Have Fun at Sesame Place?
Continue Reading Article After Our Video 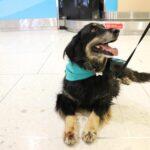 For passengers lucky enough to encounter one of the PUP volunteer teams, a “session” may last for a minute or two. But in order to get a fuller picture of what a day in the life of an airport therapy dog is like, we tagged along with Valente and Truman for the day.

For dog lovers, it’s not at all unusual to allow loyal companions to clamber up in bed. But when said companions are two Irish Wolfhounds, you might be inclined to think that there simply wouldn’t be enough room for humans and dogs alike. But Truman and Redford (who also volunteers with PUP) make it work. 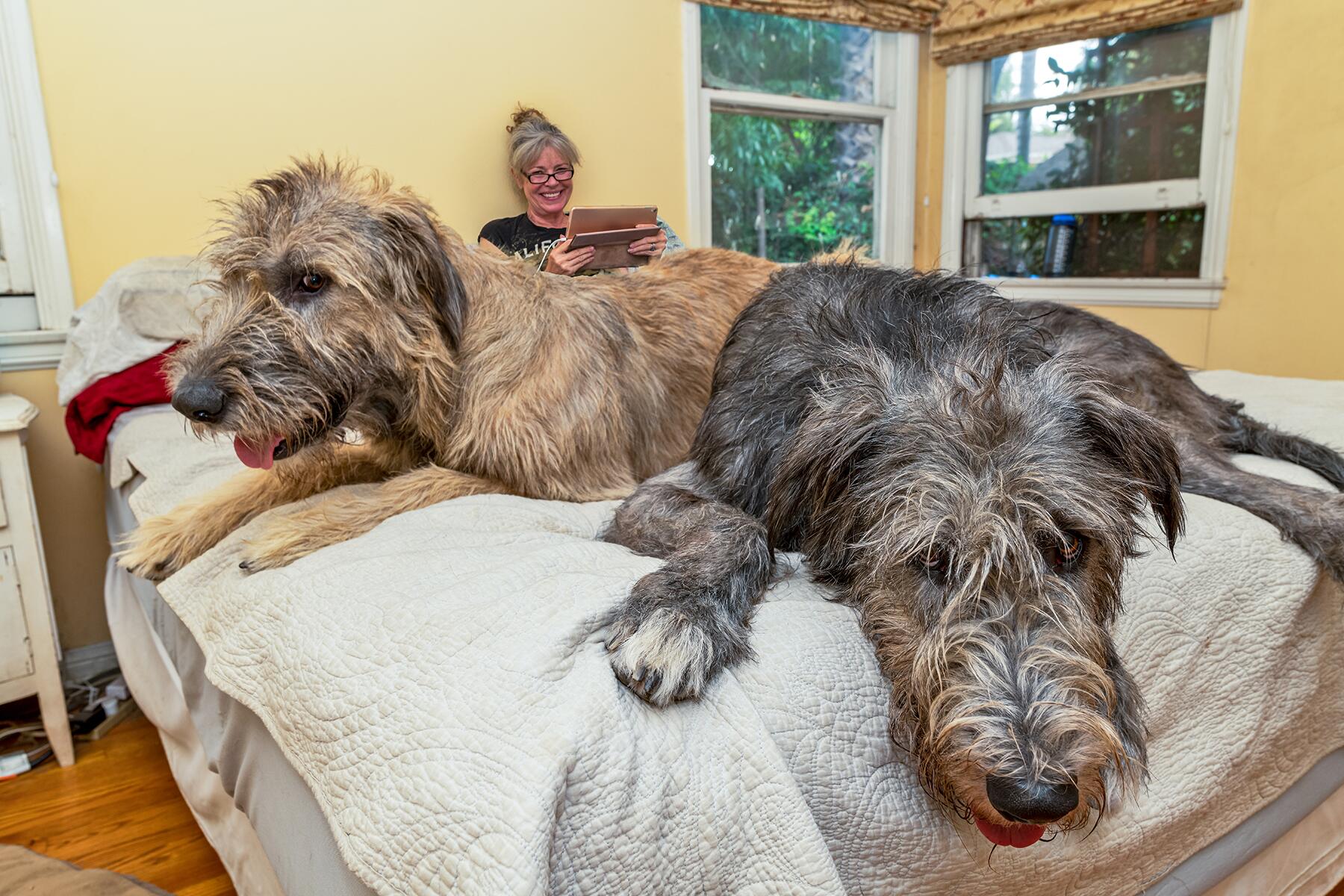 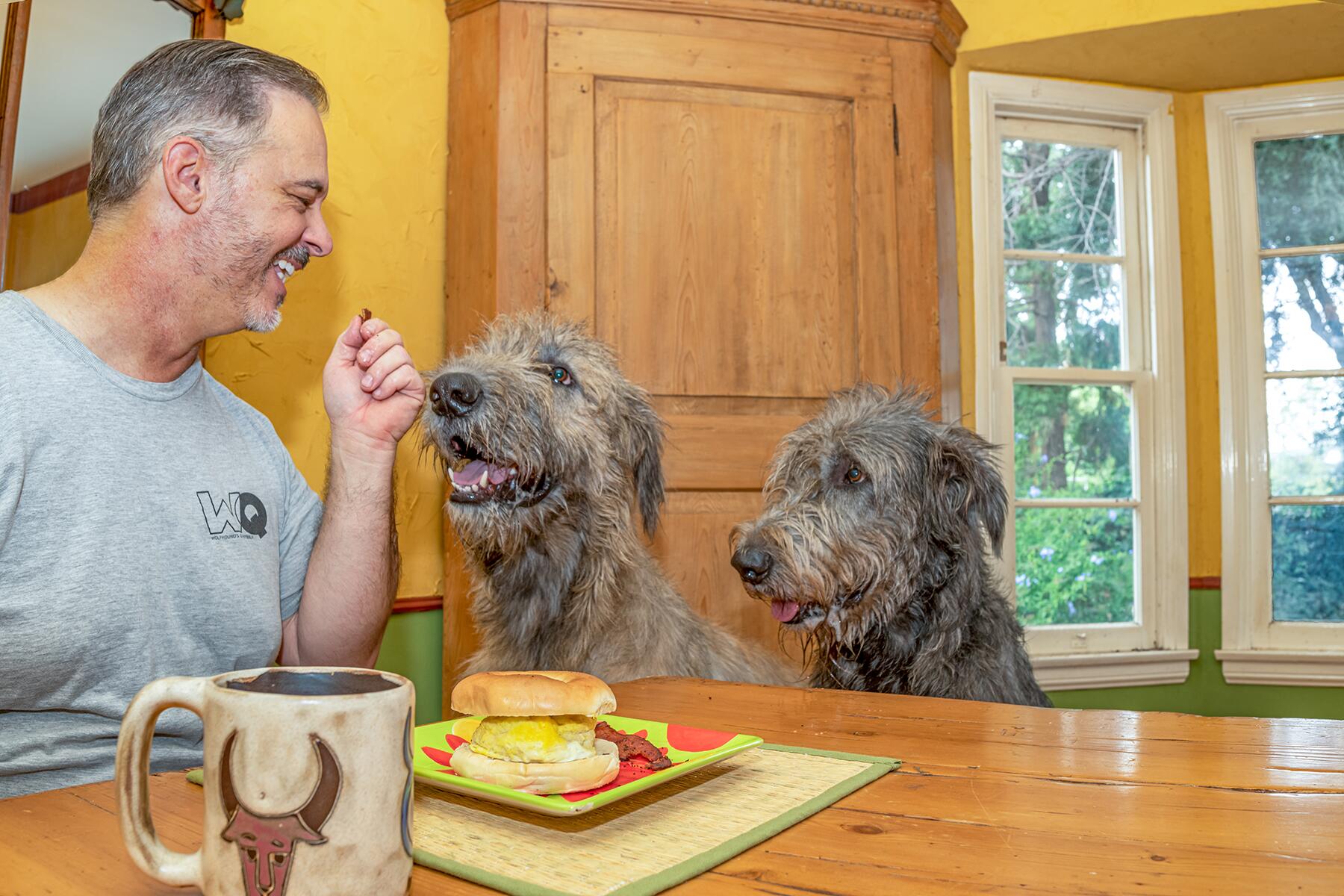 Their amiable and affectionate demeanor is an essential quality in a therapy dog—particularly an airport therapy dog. Working one-on-one (like in a hospital setting) is very different than getting attention from all sides, which can certainly be stressful for a dog that isn’t prepared or doesn’t like attention. Airport therapy dogs have to be non-reactive when it comes dealing with everything that’s going on in their environment—loud noise, activity, etc.—as well as the deluge of touching and attention they receive from passengers.

It’s a light breakfast for Truman on volunteer days so that he stays “treat motivated” when it’s time to start snapping photos in a few hours. After breakfast, Valente and Truman get in the car (Truman rides shotgun) and head to LAX.

Valente and Truman stop by the volunteer office to brush Truman and make sure he’s all set to start greeting passengers. After all, who wouldn’t want to look their best when they’re about to be in countless photos—sometimes alongside Los Angeles’ Hollywood set. Working at LAX, Truman has met his fair share of celebrities, including Fabio, Malick Ackerman, and Danny Trejo.

INSIDER TIPIf you see a dog at LAX with a vest that says “Pet Me!”, it’s polite to ask, be kind, and use a petting motion. Truman is partial to petting instead over scratches.

After regrouping, it’s time to head over to the terminal. As a sort of test run, we stop in the baggage claim area. Truman draws stares almost immediately but it takes a few moments for people to notice that they’re welcome to pet him. But as soon as the first person moves in it’s like a dam breaking. Little kids are particularly dazzled at the experience of being dwarfed by such a large dog. After a few minutes of greeting people, it’s time to move onto the rest of Terminal 1.

INSIDER TIPIf you’re traveling through the airport with your own pet, steer clear of any other therapy dogs. Nothing personal, we’re sure your dog’s an angel! But it is policy.

Earlier in the day, when describing the type of attention Truman gets, Valente had simply stated that the Irish Wolfhound is a “rock star.” So it seems appropriate that the first people to be meeting and taking pictures with Truman are a literal rock band. It just so happens that the band Dead Rock West was wrapping up their set as part of the LAX Presents, which brings a variety of performers to the airport. It’s entirely fitting how at ease Truman looks posing with the band.

INSIDER TIPIf you’d like to see Truman (or one of the many other LAX therapy pups) keep an eye on social media.

After going a little further into the terminal, passing gates of waiting passengers, something akin to Beatlemania breaks loose. People from all walks of life are stopping to pet and ask about him. More than a few people crouch down to take selfies as Valente dangles that all-important just-outside-the-shot treat in order to get Truman to look at the camera. 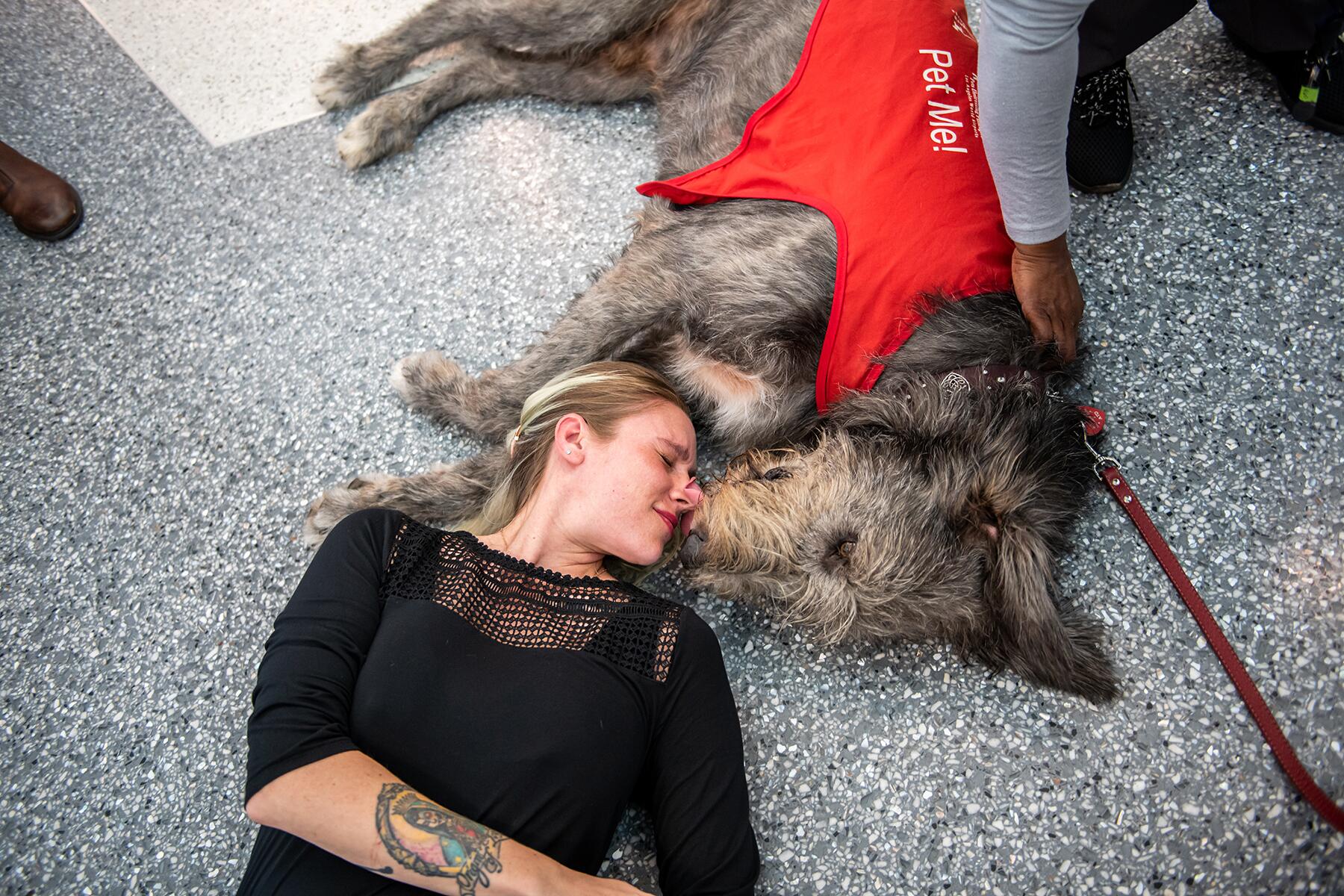 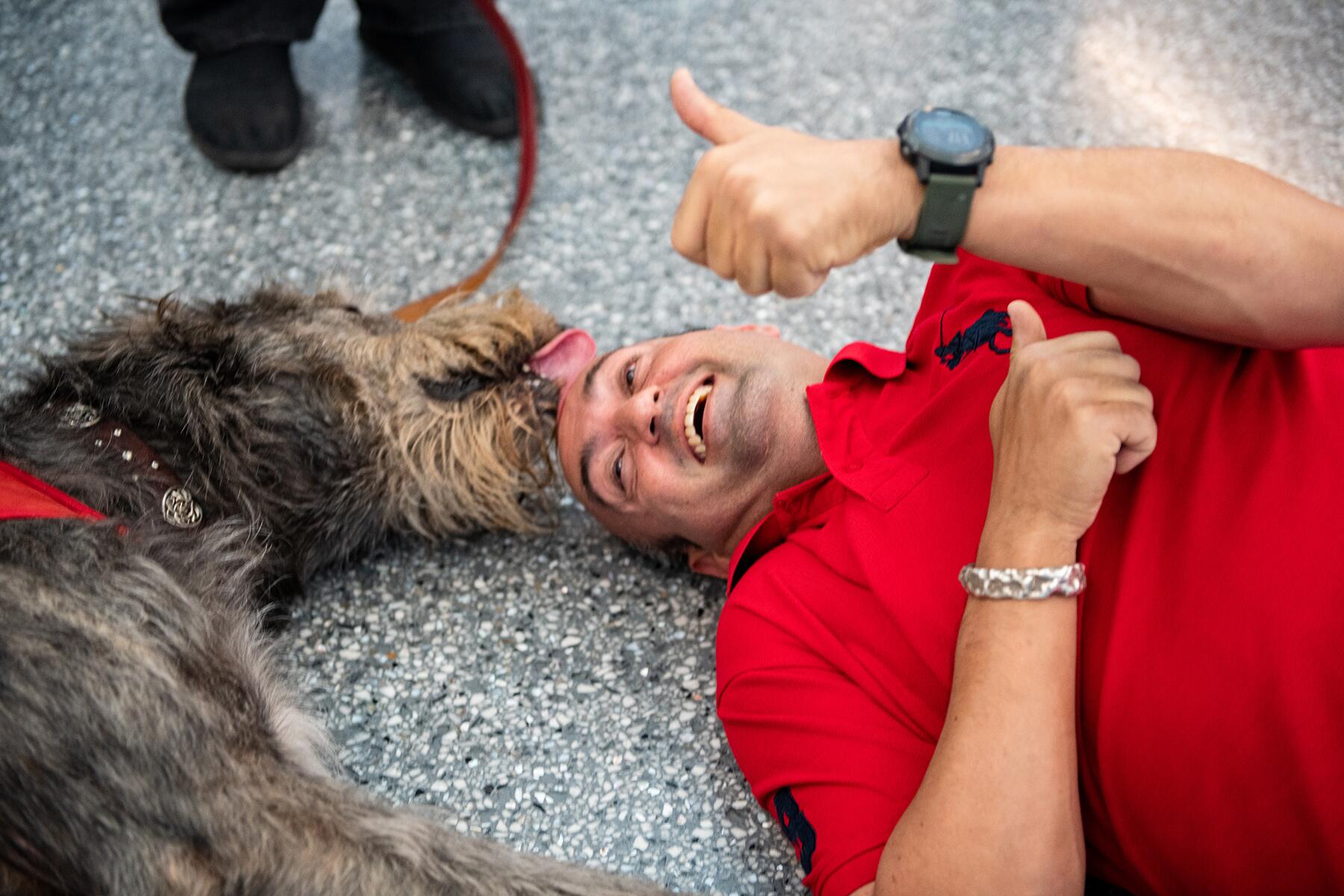 One of the heartening byproducts isn’t just the person-to-dog interaction, but the person-to-person interaction that naturally arises between people who stop to see Truman (it helps that such a big dog offers a lot of real estate so several people can be petting him at once). Mothers chat with each other as their daughters pet Truman. People trade stories about the pets they’re missing back home. Not only do passengers interact with each other, but Huebner even notes that sometimes people end up befriending the volunteers. 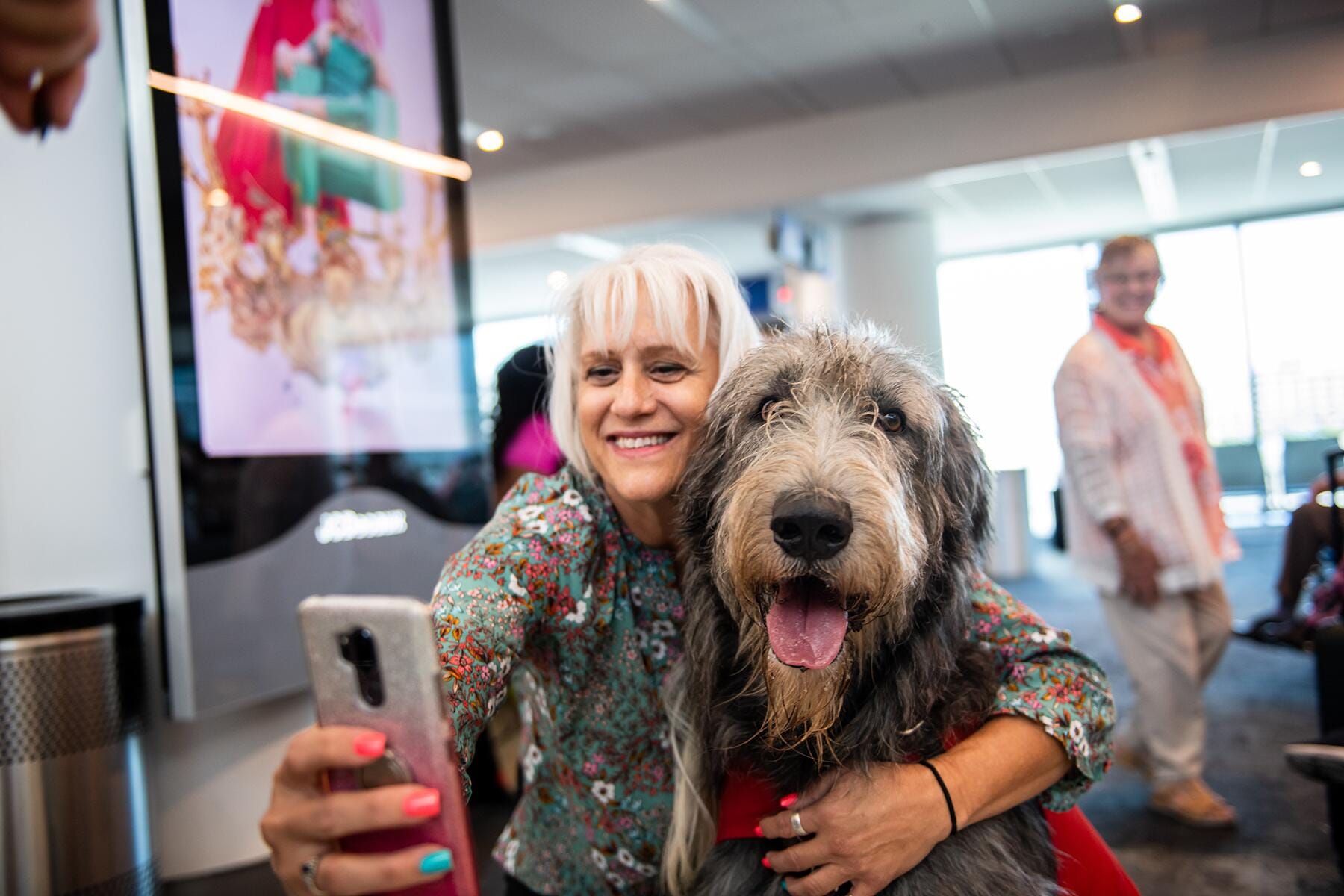 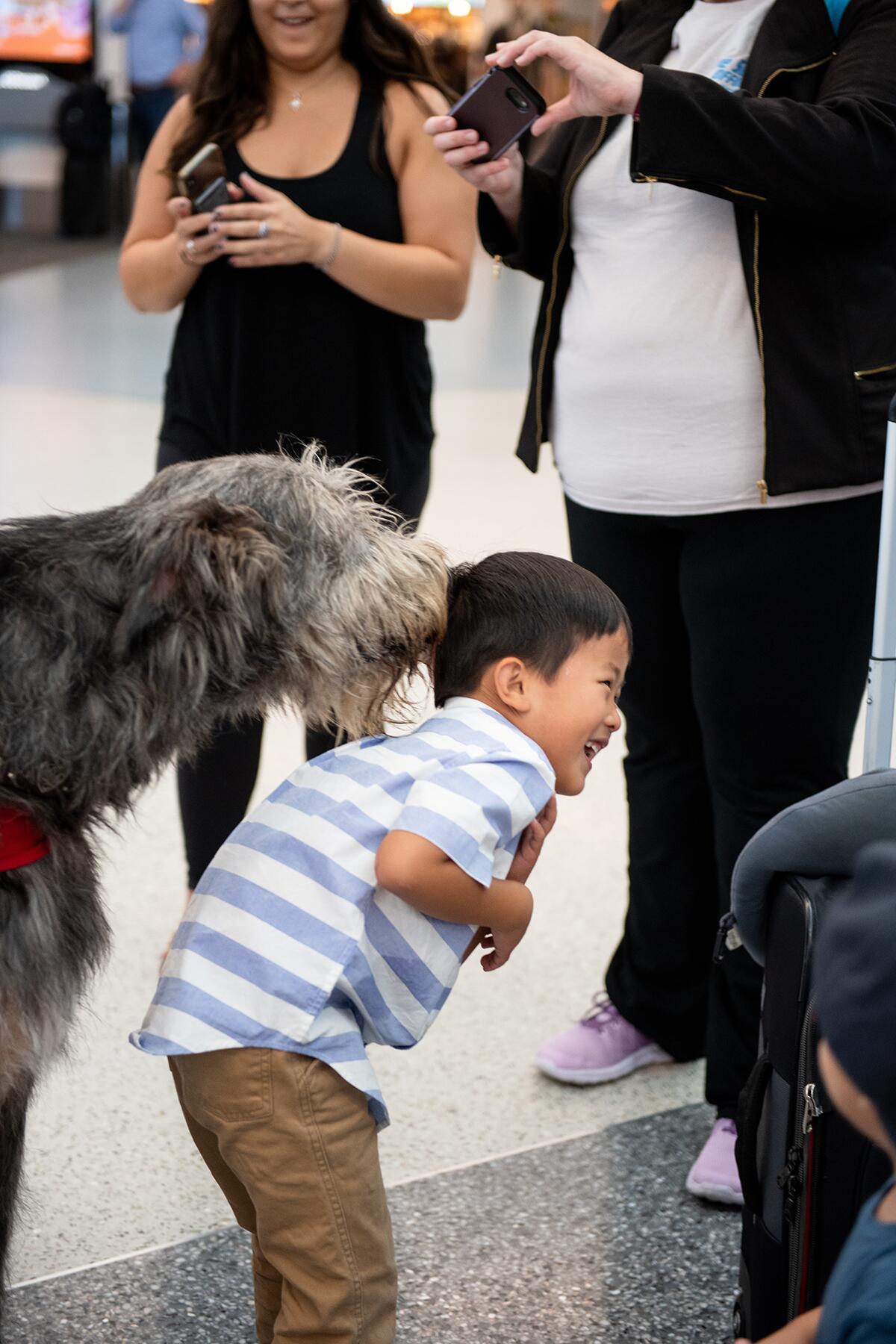 “Loving a dog and meeting a dog…There seems to be a universal truth about it,” says Valente. “We’re all the same for just 30 seconds. That’s really beautiful.”

Huebner says one of the more surprising reactions she’s found is the willingness with which people open up. People will sometimes talk about being en route to funerals or to spread a loved one’s ashes, and say what a relief is to get the kind of comfort that comes with a few moments with a friendly, furry friend.

It’s “tummy time” which is exactly what it sounds like. Truman rolls onto his side and his obliging admirers bestow him with tummy rubs.

Truman’s still accepting pets, still taking selfies. But right away Valente notes the shift in the dog’s body language. The treats aren’t working like they used to, he’s leaning away slightly, his gaze starts to drift a little. The volunteer shifts are one to two hours, but in the hour or so since we’ve gotten to the terminal Truman has gotten what would be, for any other dog, a lifetime’s worth of avalanche attention. It’s time to put away the red “Pet Me!” vest and start heading out. Because as much as the program and the volunteers love to improve people’s days, the dogs always come first.

When a dog’s an Irish wolfhound, he doesn’t need a red vest to attract attention. When Valente and Truman pull up to the window of a nearby In-N-Out, the workers inside gather around to marvel at Truman, calmly sitting in the passenger seat, cutting a strangely human silhouette. 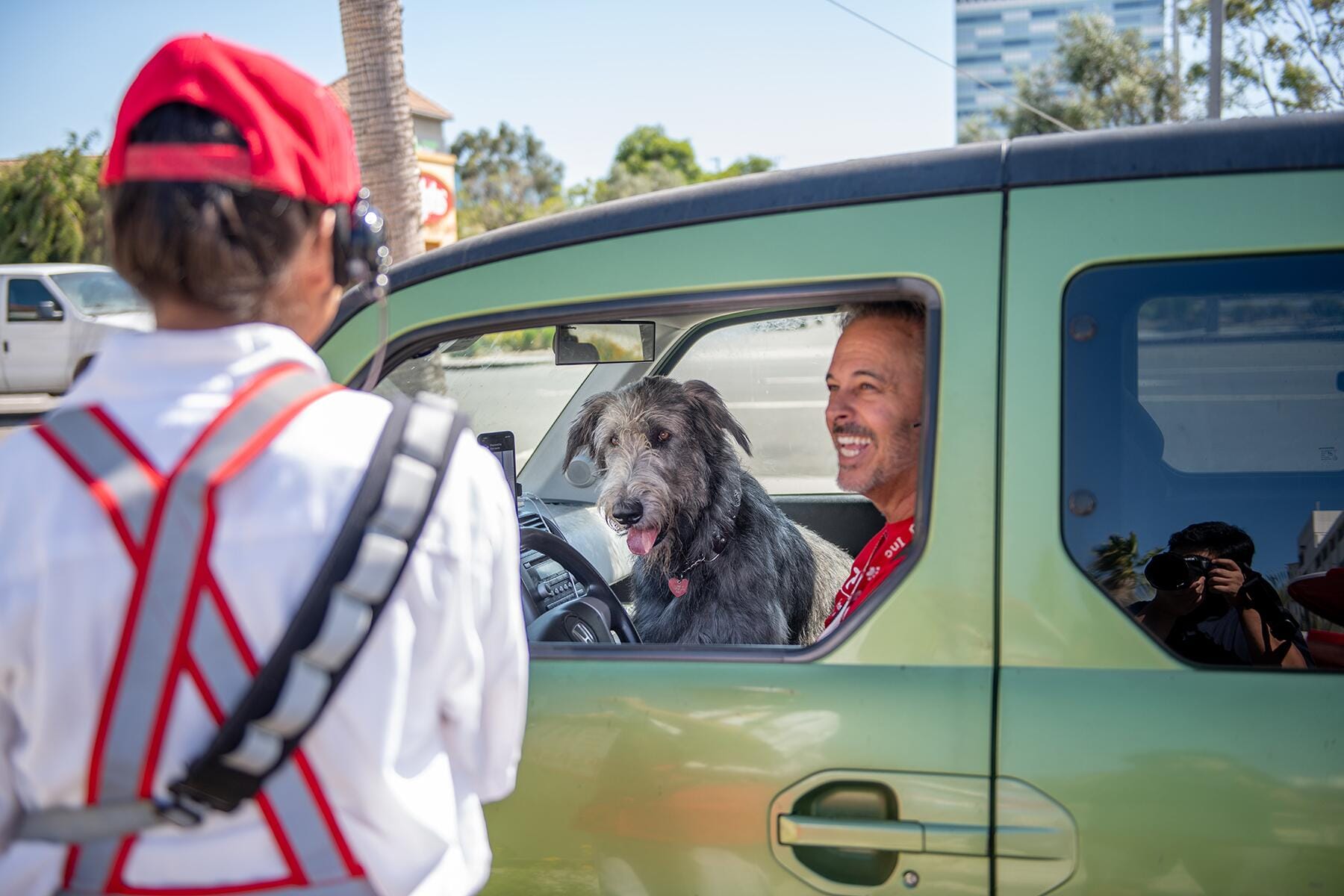 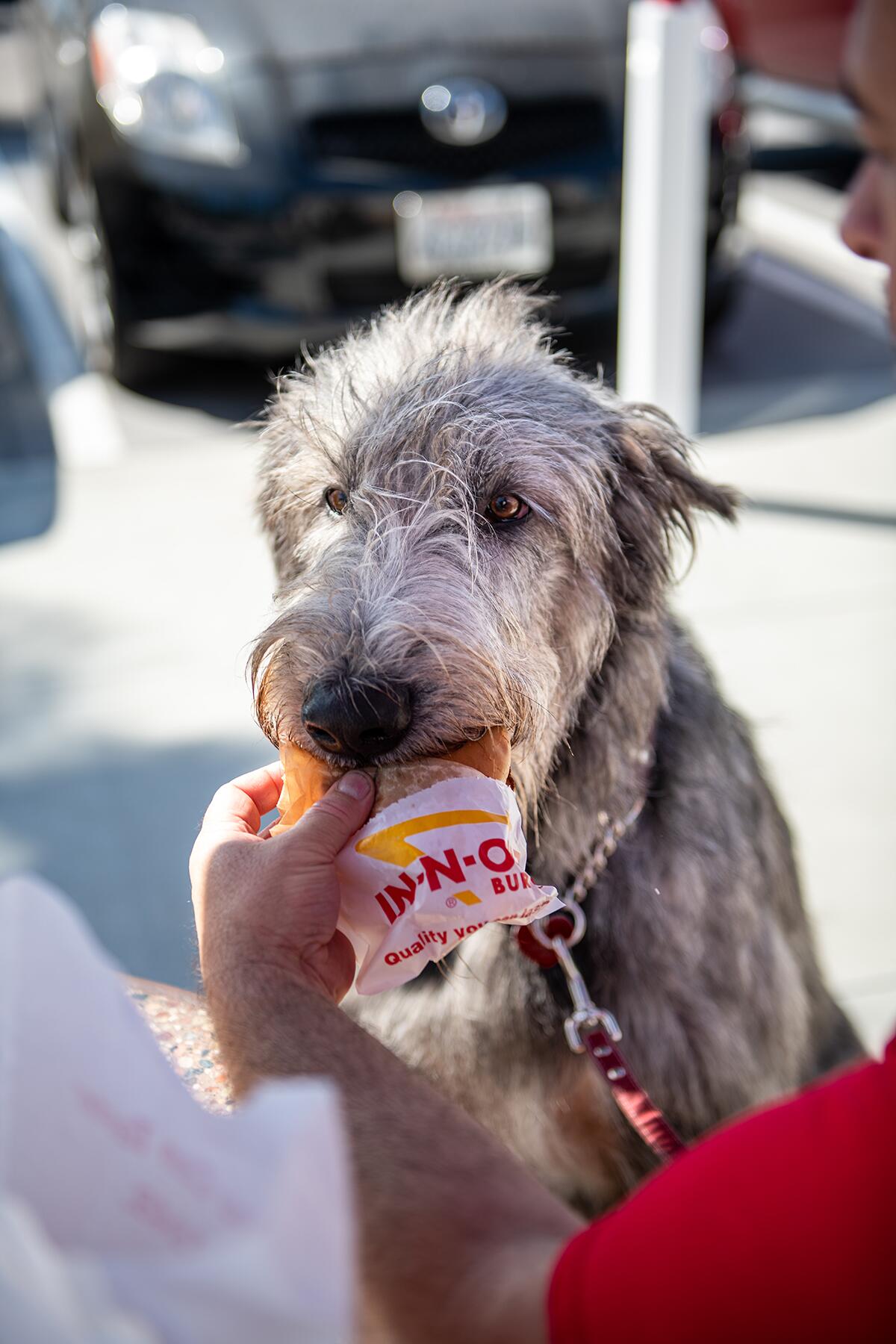 A few minutes later, Truman finally gets to chow down on a hamburger and some fries. Then it’s time to head on home where a tuckered out Truman will spend the rest of the day relaxing in the glow of a job well done.