Deals Leila Najafi Attention West Coast: You Can Now Book Flights to Paris for as Little as $321
Home  >  News   >   Restaurants in Italy: Complete Guide to Etiquette, Ordering, and Tipping

Restaurants in Italy: Complete Guide to Etiquette, Ordering, and Tipping 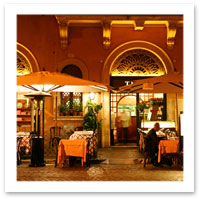 Dining in a foreign place, especially your first time, can be a baffling experience. But with a little research you can spare a lot of confusion— and perhaps put yourself on good footing with the local staff, thus improving your chances for a better recommendation about the menu, or a little something extra while you wait for the check.

Here is our complete guide to restaurant types, etiquette, ordering, paying, and tipping in restaurants across Italy.

Choosing the Right Type of Establishment

What’s the difference between a ristorante and a trattoria? Can you order food at an enoteca? Can you go to a restaurant just for a snack, or order just a salad at a pizzeria? The following definitions should help.

Not too long ago, ristoranti tended to be more elegant and expensive than trattorie and osterie, which serve traditional, home-style fare in an atmosphere to match. But the distinction has blurred considerably, and an osteria in the center of town might be far fancier (and pricier) than a ristorante across the street. In any sit-down establishment, be it a ristorante, osteria, or trattoria, you are generally expected to order at least a two-course meal, such as: a primo (first course) and a secondo (main course) or a contorno (vegetable side dish); an antipasto (starter) followed by either a primo or secondo; or a secondo and a dolce (dessert).

In an enoteca (wine bar) or pizzeria it’s common to order just one dish. An enoteca menu is often limited to a selection of cheese, cured meats, salads, and desserts, but if there’s a kitchen you’ll also find soups, pastas, and main courses. The typical pizzeria fare includes affettati misti (a selection of cured pork), simple salads, various kinds of bruschetta, crostini (similar to bruschetta, with a variety of toppings) and, in Rome, fritti (deep-fried finger food) such as olive ascolane (green olives with a meat stuffing) and supplì (rice balls stuffed with mozzarella).

The handiest and least expensive places for a quick snack between sights are probably bars, cafés, and pizza al taglio (by the slice) spots. Pizza al taglio shops are easy to negotiate but very few have seats. They sell pizza by weight: just point out which kind you want and how much.

Bars in Italy are primarily places to get a coffee and a bite to eat, rather than drinking establishments. Most bars have a selection of panini (sandwiches) warmed up on the griddle (piastra) and tramezzini (sandwiches made of untoasted white bread triangles). In larger cities, bars also serve vegetable and fruit salads, cold pasta dishes, and gelato. Most bars offer beer and a variety of alcohol as well as wines by the glass (sometimes good but more often mediocre). A café (caffè in Italian) is like a bar but usually with more tables. Pizza at a café should be avoided—it’s usually heated in a microwave.

If you place your order at the counter, ask if you can sit down: some places charge for table service, others do not. Note that in some places you have to pay a cashier, then place your order and show your scontrino (receipt) at the counter. Menus are posted outside most restaurants (in English in tourist areas); if not, you might step inside and ask to take a look at the menu (but don’t ask for a table unless you intend to stay).

Italians take their food as it is listed on the menu, seldom if ever making special requests such as “dressing on the side” or “hold the olive oil.” If you have special dietary needs, however, make them known; they can usually be accommodated. Although mineral water makes its way to almost every table, you can order a carafe of tap water (acqua di rubinetto or acqua semplice) instead, but keep in mind that such water can be highly chlorinated.

Table manners in Italy are formal; rarely do Italians share food from their plates. In a restaurant, be formal and polite with your waiter—no calling across the room for attention.

Italians do not have a culture of sipping cocktails or chugging pitchers of beer. Wine, beer, and other alcoholic drinks are almost always consumed as part of a meal. Public drunkenness is abhorred.

Smoking has been banned in all public establishments, much like in the United States.

Wiping your bowl clean with a (small) piece of bread is usually considered a sign of appreciation, not bad manners. Spaghetti should be eaten with a fork only, although a little help from a spoon won’t horrify locals the way cutting spaghetti into little pieces might. Order your espresso (Italians don’t usually drink cappuccino after breakfast time) after dessert, not with it.Don’t ask for a doggy bag. In self-service bars and cafés it’s good manners to clean your table before you leave.

Breakfast (la colazione) is usually served from 7 to 10:30, lunch (il pranzo) from 12:30 to 2:30, dinner (la cena) from 7:30 to 10. Peak times are usually 1:30 for lunch and 9 for dinner. Enoteche and bacari (wine bars) are open also in the morning and late afternoon for a snack at the counter. Most pizzerias open at 8 PM and close around midnight—later in summer and on weekends. Most bars and cafés are open from 7 AM until 8 or 9 PM; a few stay open until midnight. Unless otherwise noted, the restaurants listed in this guide are open daily for lunch and dinner.

Most restaurants have a cover charge per person, usually listed at the top of the check as coperto or pane e coperto. It should be a modest charge (€1–€2.50 per person) except at the most expensive restaurants. Whenever in doubt, ask before you order to avoid unpleasant discussions later. It is customary to leave a small tip (around 10%) in appreciation of good service. Tips are always given in cash.

The price of fish dishes is often given by weight (before cooking), so the price you see on the menu is for 100 grams of fish, not for the whole dish. (An average fish portion is about 350 grams.) In Tuscany, bistecca alla fiorentina (Florentine steak) is also often priced by weight (€4 for 100 grams or €40 for 1 kilogram [2.2 lbs]). Major credit cards are widely accepted in Italy, though cash is usually preferred. More restaurants take Visa and Master- Card than American Express.

When you leave a dining establishment, take your meal bill or receipt with you; although not a common experience, the Italian finance (tax) police can approach you within 100 yards of the establishment at which you’ve eaten and ask for a receipt. If you don’t have one, they can fine you and will fine the business owner for not providing the receipt. The measure is intended to prevent tax evasion; it’s not necessary to show receipts when leaving Italy.

If servizio (usually 10%-15%) is included at the bottom of the check, no tip is necessary. If service is not included, leave a tip of up to 10% in cash. Always leave your tip in cash. Usually there will not be a line item on your credit-card slip for a tip—but even if there is, tip in cash. Tip checkroom attendants €1 per person and restroom attendants €0.50 (more in expensive hotels and restaurants). In major cities tip €0.50 or more for table service in cafés. At a hotel bar tip €1 and up for a round or two of drinks.