Hotels & Lodging Amy Fallon Quiet Hours, Curfews, and *Chores*? Why the Tide May Be Turning Against Airbnb
NewsDelta to Update Domestic Fleet 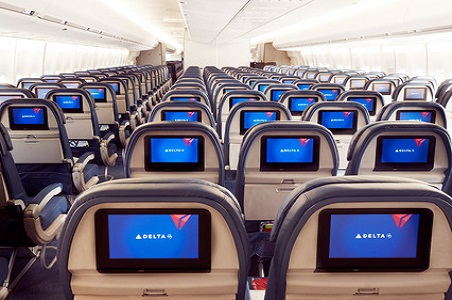 Over the next three years, updates will be rolling out across Delta’s narrow-body domestic fleet as part of the carrier’s efforts to improve passenger comfort and provide a more consistent product onboard. Included in the revamp will be new seats, overhead bins, lavatories, and lighting. Expect to see the changes on 225 planes, including Delta’s 757-200s, 737-800s, A319s, and A320s.

In a statement, Delta’s Executive Vice President and Chief Revenue Officer, Glen Hauenstein, outlined the overall progress Delta has made to date, and also the upgrades en route, "In just six years, we will have made updates to interiors throughout Delta’s fleet giving customers improved comfort and more options to work or relax and be entertained."

Once the enhancements are completed, the planes will have power and in-seat video/satellite TV at every seat. New lavatories will be installed, as well as updates to the galleys and LED cabin lighting. New overhead bins will be featured on the A319, A320, and 757-200 aircraft. These upgraded bins promise an increased capacity of 50 percent or more, helping to alleviate the carry-on baggage crush. The personal entertainment screens mean that the domestic fleet will have a consistent offering of both stored content and live satellite TV, in addition to in-flight Wi-Fi from Gogo.

As for seating, the planes will see all-new slim-line seats installed. These seats are lighter and, as the name implies, slimmer than the prior generation of aircraft seats, which allows for more to fit on a plane without reducing passengers’ personal space. In Delta’s case, the new seats allow for an extra row of economy-class seats on the A319 and A320 planes. On the 757-200s, the increase will be more significant, with up to three additional rows (or, 18 seats) being added to the aircraft. (The 737-800s will keep the same number of seats.) Similar seats are already in use on a number of other airlines, and Delta’s main competition—American Airlines and United Airlines—are installing comparable models on their domestic fleets, as well.