News Samantha Linnett Is This Budget Travel Hack Worth the Risk?
NewsCustoms and Etiquette in Spain: 15 Things Every Visitor Should Know

Customs and Etiquette in Spain: 15 Things Every Visitor Should Know 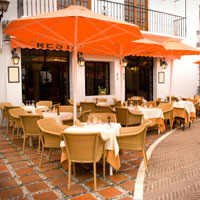 A little pre-trip research goes a long way. Here’s what you need to know about customs and etiquette in Spain.

1. When addressing Spaniards with whom you are not well acquainted or who are elderly, use the formal usted rather than the familiar tu.

2. Some town councils are cracking down on people wearing swimsuits in public spaces. Use your common sense—it’s unlikely you’d be allowed entry in a bar or restaurant wearing swimming attire back home, so don’t do it when overseas.

3. Be respectful when visiting churches: casual dress is fine if it’s not gaudy or unkempt. Spaniards object to men going bare-chested anywhere other than the beach or poolside.

4. These days, the Spanish are generally very informal, and casual-smart dress is accepted in most places.

5. Many of the misunderstandings for visitors to Spain concern the dinner table. The Spanish eat no earlier than 1:30 PM for lunch, preferably after 2, and not before 9 PM for dinner. Dining out on the weekend can begin at 10 PM or even later. In areas with heavy tourist traffic, some restaurants open a bit earlier.

6. Dining is not the only part of Spanish life with a bizarre timetable. Outside of major cities most shops shut in the afternoons from 2 to 5, when shopkeepers go home to eat the main meal of the day, and perhaps snooze for a while. It’s best to work this into your plans on an “if you can’t beat them, join them” basis, taking a quick siesta after lunch in preparation for a long night out on the town.

7. One of the major drawbacks of drinking and eating in Spanish bars and restaurants used to be the amount of cigarette smoke. Antismoking laws introduced in 2006, however, now require bars and clubs with 100 square meters of space or more to provide a nonsmoking section; in most of the better restaurants, smoking is not allowed at all.

8. Spanish office hours can be confusing to the uninitiated. Some offices stay open more or less continuously from 9 to 3, with a very short lunch break. Others open in the morning, break up the day with a long lunch break of two to three hours, then reopen at 4 or 5 until 7 or 8.

9. Spaniards enjoy a certain notoriety for their lack of punctuality, but this has changed dramatically in recent years, and you are expected to show up for meetings on time.

10. Smart dress is the norm for business meetings in Spain.

11. Spaniards in international fields tend to conduct business with foreigners in English. If you speak Spanish, address new colleagues with the formal usted and the corresponding verb conjugations, then follow their lead in switching to the familiar tu once a working relationship has been established.

12. One of the best ways to avoid being an Ugly American is to learn a little of the local language. You need not strive for fluency; even just mastering a few basic words and terms is bound to make chatting with the locals more rewarding.

13. Although Spaniards exported their language to all of Central and South America, Spanish is not the principal language in all of Spain. Outside their big cities, the Basques speak Euskera. In Catalonia, you’ll hear Catalan throughout the region, just as you’ll hear Gallego in Galicia and Valenciano in Valencia (the latter, as with Mallorquín in Majorca and Menorquín in Menorca, are considered Catalan dialects). Although almost everyone in these regions also speaks and understands Spanish, local radio and television stations may broadcast in their respective languages, and road signs may be printed (or spraypainted over) with the preferred regional language. Spanish is referred to as Castellano, or Castilian.

15. If your Spanish breaks down, you should have no trouble finding people who speak English in major cities and coastal resorts, but you won’t necessarily be able to count on the bus driver or the passerby on the street. It’s much more likely that you’ll find an English-language speaker if you approach people under age 30.