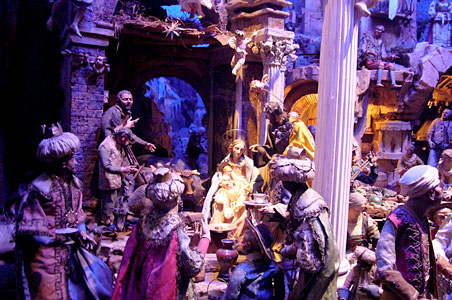 Christmas is a magical time here in Naples, especially after a year that brought more good news than bad. (The America’s Cup in April showcased Naples’ beauty to the world, the soccer team is riding high again, and the garbage problem is a distant memory.) For weeks before the 8th December, the traditional start of the Christmas period in Naples, vendors construct makeshift stalls on Via San Gregorio Armeno, all the better to display their craftsmanship. For the previous 11 months they have been constructing presepi, the nativity scenes the city has been long famous for—in 1787 Goethe commented on how the sky featured in the models reflected the sky of Naples, rather than Bethlehem.

The narrow street, so crowded in the days leading to the 25th that pedestrian access is strictly one-way, sparkles with the fairy lights adorning these works of art made with cork, tree bark, and musk. Each scene, along with the traditional components, is complete with figurines showing daily life in the city, from the baker to the fishmonger to the pizza-maker. Prominent public figures also feature, with statues of Berlusconi, now no longer Italy’s Prime Minister, reduced by 50%. The Napoli football team proliferate, but new entries for 2012 include Prince Harry, as seen in Vegas.

This year’s Christmas lights have been specially created by artists from Salerno, 30 miles to the south. Shooting comets and swirling stars glimmer overhead as you fight the throng. The crowds and lights fill your senses, while traditional street musicians wander the streets from shop to shop playing the zampogna, a type of bagpipe. These zampognari dressed in traditional costume often travel from the mountains of Abruzzo, some one hundred miles north east of Naples, for the season. 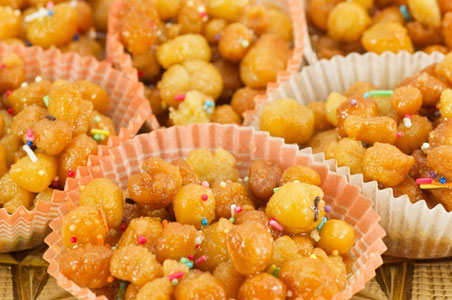 Food is of course, as at all Italian festivities, very important at this time of year. Neapolitans revel in their local delights produced especially for the season. Strufoli, recalling a time when delicacies were difficult to attain, is a plate of cooked dough coated in honey, sprinkled with hundreds upon thousands of sprinkles. Roccocò is a hard jaw-breaking biscuit. A soft version of torrone, from nearby Benevento, was first produced for rich noblemen, who tended to be older and therefore had less teeth! The traditional Christmas Eve meal is a feast of seven different fish dishes, and a trip to the Porta Nolana fish market, open all night on the 23rd, is an unforgettable experience. It’s not for the faint-hearted, however—vendors chop live capitoni (eels) into cooking-sized chunks before your eyes.

The family get-together is never complete without a game of tombola, similar to bingo. Each number is designated a different meaning by the Neapolitan Smorfia (a book used to analyse symbols in dreams—very useful for the lottery). For example five is the hand, 23 is the fool, 55 is music. Christmas is, of course, number 25.