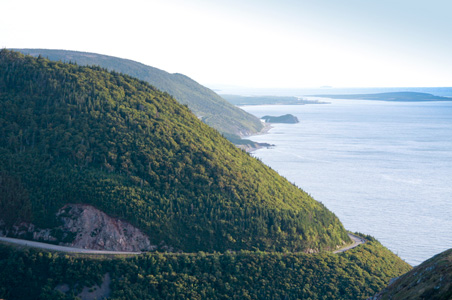 Perched at the tip of Nova Scotia, Cape Breton Island is the jewel of Canada’s Atlantic coast. Its array of natural assets, the main draw. Massive promontories jut out into the Atlantic, rocky shores play host to low-slung fishing villages, and a thickly wooded interior dives into deep valleys and blankets the sides of small mountains, which are continuations of the Appalachian chain. Cape Breton’s commitment to ecological preservation has received many accolades, but its preservation of the local indigenous and immigrant communities is also noteworthy. This is the only place in the world where you’ll find aboriginal communities still sharing the same geographical space with Acadian French and Scottish Gaelic cultures.

All of these treasures are accessible by following the legendary Cabot Trail, a twisting two-lane road that traces the outline of the northern part of the island. Rental cars can be found in Sydney, which is just south of the trail. Halifax, the provincial capital with plenty of attractions in its own right, has more frequent flights and is a four-hour drive from Cape Breton. 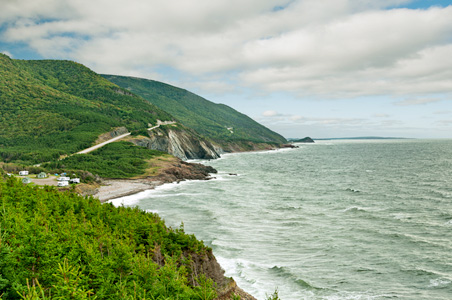 Wherever you come from, the starting point of the Cabot Trail is in Baddeck. In the late 19th century, Alexander Graham Bell set up shop in Baddeck, and you can learn all about him and his experiments at the excellent Alexander Graham Bell National Historic Site. Bell moved to Cape Breton because it reminded him of the Highlands in his native Scotland. Indeed, geologically there is evidence that Cape Breton and Scotland were part of the same land mass ages ago. In October, Baddeck hosts the popular Celtic Colours Festival, which is frequented by visitors from Scotland who come to see their own native music played in one of the few places it’s been preserved.

From Baddeck, you can circle the Trail in either direction. Heading northwest, you’ll spend the day slowly cruising up the coast, stopping regularly for the magnificent vantage points standing on heady cliffs looking over the Atlantic. When you come to Ingonish Beach you’ll find not only an excellent beach, but also Highlands Links Golf Course, a course that is regularly rated as the best public course in Canada, and is often among the top 100 in the world. Located inside the Cape Breton Highlands National Park, the course is cut into the terrain and is remarkable even to non-golfing travelers. Nearby, the splurge-worthy Keltic Lodge will put you up for the night. If you’re on the other end of the budget spectrum, you can pitch your tent at numerous facilities in the park. Broad Cove campground, for instance, has swimming and showers.

Moose, Eagles, and Whales—Oh My! 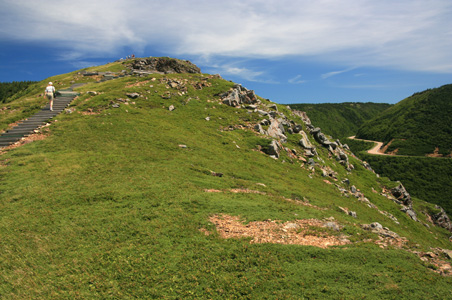 This area is a good jumping-off point to explore some of the trails in the national park. The Franey loop takes you up to a plateau where you’ll discover 360-degree views of the landscape. Moose are often seen in this area (though they are frequently seen all over the island—don’t get close!). The Middle Head loop, meanwhile, takes you out to bluffs overlooking local coves and bays, and you can spot see seabirds, eagles, and even seals and whales out at sea.

Speaking of whales, your best chance of seeing them is on a whale watching tour. Most of them guarantee sightings. Several operators run their tours from the northernmost part of the island, where you can stay and explore the top of the park and less-touristed coastline. One operator we prefer is Oshan. While you’re on the “Top of the Island,” be sure to sample some of the freshly caught Aspy Bay oysters at Hideaway Campground & Oyster Market, which are good enough to warrant their own trademark. Also at the “Top” is a shop called Arts North, where you’ll find items made by local artisans. 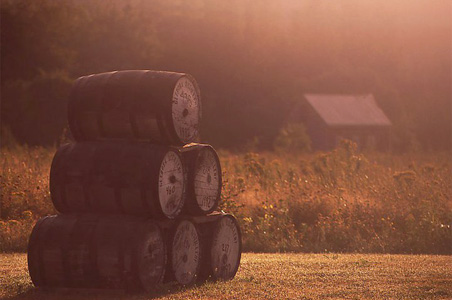 Angling down the western part of the island and out of the park, you’ll hit Cheticamp, the Acadian capital of the island, where you’ll hear French spoken before English by the locals. All Aboard Restaurant, serves what might be the the best seafood chowder on the island and also regularly features live Acadian music. Take this opportunity to explore some of the national park’s western trails, too. The Salmon Pools trail takes you on a 3-4 hour hike up a river canyon, where you can find Atlantic salmon swimming around in the deep chilly canyon pools.

When the Cabot Trail bends back around to Baddeck, you’ll find yourself able to continue along the coast toward Inverness. Make sure you go this way—it’s the Ceilidh (kay-lee) Trail, which offers great insight into the lives of the early Scottish settlers on the island. True to the area’s roots, there’s even a single malt whisky distillery, Glenora, which until recently was the only one in North America. Sample some of its award-winning product, and then spend the night in the equally lauded attached inn.

As you follow the Ceilidh Trail back to the Cabot, you’d be remiss not to seek out the Trail’s namesake, a ceilidh, which is a traditional Gaelic social gathering featuring folk music and dancing. You can find a ceilidh most Sundays at the Celtic Music Interpretive Centre.

Finally, seek out the Wagmatcook Culture and Heritage Centre on the road back to Baddeck, which will provide a glimpse of the local M’ikmaq aboriginal culture. For a taste of the true traditions of the island, you can visit any of their five communities spread over Cape Breton, where traditions like powwows, feasts, drumming, and storytelling are still very much a part of the community’s way of life.