News Apeksha Bhateja Have $340,000 and Want to Vacation in a Survivalist's Paradise?
NewsStep Into: Breaking Bad

With the mid-season finale of Breaking Bad last night, our collective blood pressure has reached a new high, at which it will likely remain suspended until the show’s resolution next summer brings sweet relief. The interim months will no doubt be rife with hopeless fiending and unbearable withdrawal symptoms. The only semblance of remedy is to relive the turbulent events that have brought us to where we are now—the scenes and storylines that paved the road to Walt’s rise to power and fall from grace, to the heartbreaking corruption of Jesse, to the tense entrapment of Skyler, to the singular tenacity of Hank, to the demise of Gus and his entire empire, and to the claiming of any and all victims in the wake.

Take an emotional journey through the last four-and-a-half seasons in the place where it all transpired: Recreate the drama on location, in Albuquerque, New Mexico. 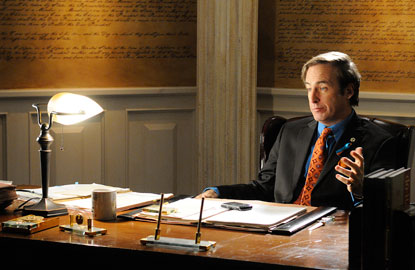 "I am the one who knocks!" Walt vehemently informs his wife Skyler in Episode 6 of Season 4, making her fully realize for the first time just how much she has to fear inside her own home. That home is one of the first stops on The BaD Tour, a 3-hour trolley tour run by ABQ Trolley Co. which has become so popular that tickets for September dates have already sold out. The White Residence is located on Piermont Dr. near Orlando Pl NE, despite its fictional address being 308 Negra Arroyo Lane. Other locations on the tour include the site of the fast food front for Gus’s drug operation Los Pollos Hermanos, actually Twisters Grill; the Crossroads Motel, a den of drug use and prostitution which DEA agent Hank calls "The Crystal Palace"; the house Jesse inherited from his aunt, at 16th St and Los Alamos NW; the car wash Skyler uses to launder Walt’s money, actually Octopus Car Wash; and the law offices of Saul Goodman and Associates (pictured above), located in a real-life strip mall on Montgomery Blvd NE.

The Albuquerque Convention and Visitors Bureau has put together an even more extensive itinerary for a self-guided tour of Breaking Bad locations, including a few attractions worth a visit all on their own, like the Albuquerque International Balloon Museum. 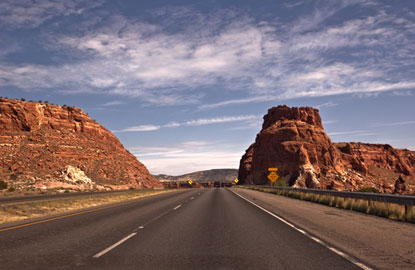 Build your Own Empire

If there’s one thing we learned from the character of hardened-by-life private investigator Mike, it came from his speech to Walter about never choosing a half-measure when you should go all the way. Applying that lesson to the art of travel, we believe a true Breaking Bad tour would be incomplete without embarking on your adventure the same way Walt and Jesse began theirs.

Start by renting an RV. Cruise America, the country’s largest company for recreational vehicle rentals, has a location right in Albuquerque at the KOA Campgrounds on Skyline Rd. Then, head out into the vast desert where the very first scenes of Breaking Bad—sirens, tightie whities, gas masks, and all—were filmed. West of Albuquerque, the To’Hajiilee Indian Reservation provided the beautiful, sun-drenched landscape, dotted by richly colored red rock formations, for the backdrop of the desert scenes in the series’ first two episodes. If the scope of your trip to New Mexico doesn’t quite merit a campervan, spend an afternoon exploring the sandy expanse with a jeep or all-terrain-vehicle tour instead, courtesy of Adventures Outwest.

Back in the city, grab a snack at one of the local shops that are cleverly capitalizing on the success of the show. Downtown, The Candy Lady is serving up “meth candy,” a blue rock candy the store originally made for the show to use as a prop for Walter White’s signature Blue Sky crystal meth (a 99.1% chemically pure product, as he is wont to point out). Uptown, Rebel Donut is making “Blue Sky Breaking Bad” donuts, topped with sugary blue crystal sprinkles. 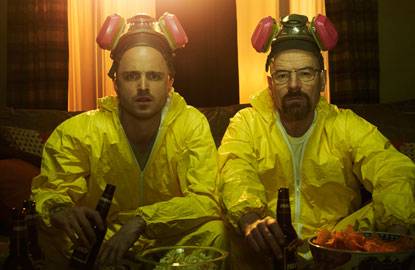 Ruin Season 5, Part 2 for Yourself

The final episodes bringing Breaking Bad to its heart-pounding conclusion will be filmed on location beginning this November. Indulge in the ultimate spoiler by catching a glimpse of the cast’s Emmy-winning and Emmy-nominated actors delivering some of their last lines live on the set. Expected filming locations include Albuquerque Studios, the White house on Piermont Dr., and Saul’s office on Montgomery Blvd. This up-close-and-personal sneak preview of what genius creator Vince Gilligan has in store may only serve to feed your need for Breaking Bad, but it should at least tide you over as we all anxiously await the culmination of the best show on television.