Are chartered flights poised to become the rideshare of the sky?

We all know that feeling. The agony of endless airport security lines and crowded waiting areas. Waves of tension permeating the air as a flight agent announces the plane’s late departure. The possibility of a missing bag, an annoying seatmate, or even worse–unpredictable catastrophes. In this pandemic travel era, we have the additional concern of potentially contracting COVID-19, which has now morphed into COVID-21, a more contagious and infectious strain that is spreading to various parts of the world.

Despite that, air travel demand for the spring and summer months is rapidly rising. Which got me thinking: with the increase in popularity of semi-private, chartered flights, are they really that much safer than flying commercial? Aero, a new luxury travel service that in February debuted its first flight route from Los Angeles to Aspen, recently invited me to evaluate this for myself. I hadn’t been on a plane since March 2020, when I returned home from Switzerland the day before the European travel ban took effect. I was nervous but also curious–as demand increases and prices become more affordable, are these airlines poised to become the Ubers and Lyfts of the sky?

The comparison of these types of flights to rideshare services is even more relevant when you consider that one of the co-founders of Aero is Garrett Camp, who also co-founded Uber. Aero is helmed by Uma Subramanian, who joined the company two years ago as CEO. Prior to Aero, she was the founding CEO of Voom Flights, an on-demand helicopter booking platform. According to Subramanian, “This is an extraordinary time in aviation and I look forward to building the future of flight.”

[W]hile commercial flights have witnessed their passenger counts slashed by more than half of their normal capacity, private flights are running at 90% of “pre-pandemic levels.”

As reported by MultiBriefs, while commercial flights have witnessed their passenger counts slashed by more than half of their normal capacity, private flights are running at 90% of “pre-pandemic levels.” And many private jet passengers cite the desire to avoid crowds to reduce potential exposure to the coronavirus as one of the appealing aspects of private or semi-private flights.

Referring to themselves as an “on-demand charter service,” Aero’s goal is to redefine first-class air travel. They boast white-glove luggage service with dedicated “hosts” who are there to attend to your every need. Because every flight is designed for a maximum of 16 passengers who are socially distanced with minimized touchpoints, I felt safer booking this flight than its commercial counterpart. I also liked the idea of not having to traipse through an airport, with the potential of dozens of hands on my luggage as it made its way through security screening and onto the plane.

From the moment I stepped out of my car and into the private lounge, I felt like a VIP. My host checked my suitcase at the curb and escorted me to the waiting area. He brought me a cappuccino and then went over a couple of pre-flight questions. I was relieved to know that the flight was half-full with only eight passengers, and when it was time to board I didn’t feel the same type of apprehension that I normally did while flying. There was no crowded boarding line, and no passengers clamoring for a spot for their carry-ons in the overhead bin. 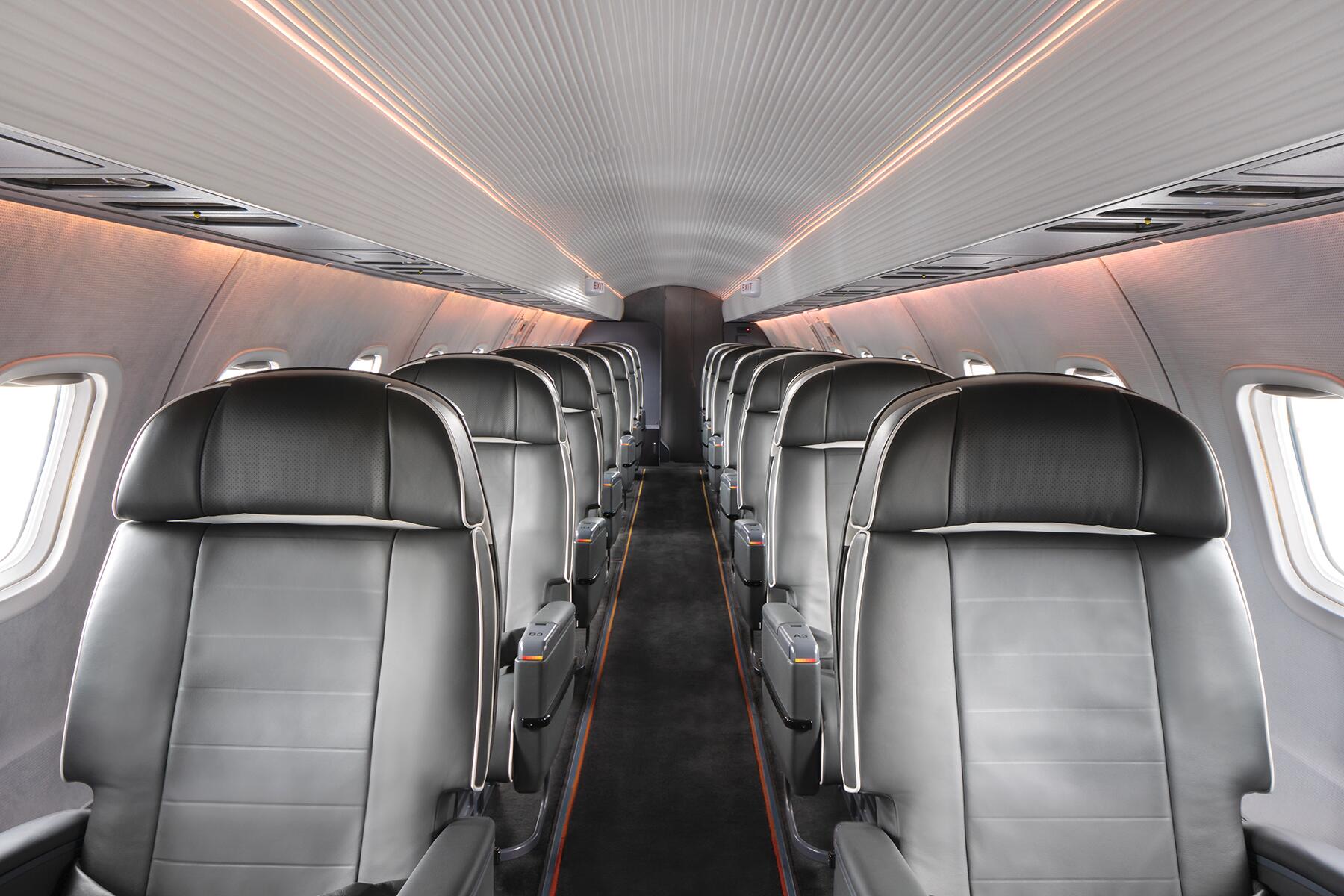 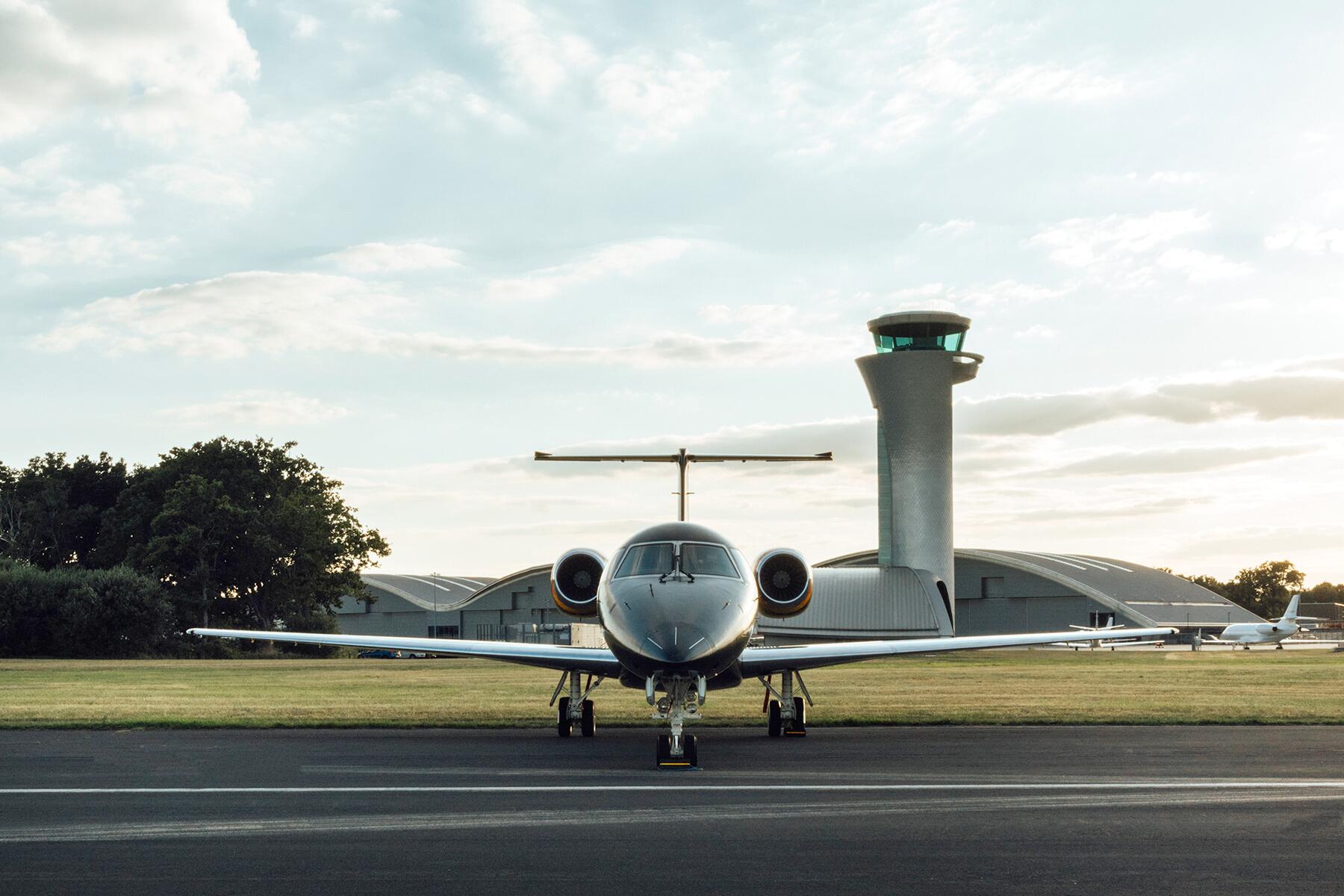 Shortly after take-off, I was able to choose from a beverage menu that included botanical hard seltzers and signature cocktails such as Kali, a jalapeño-infused passion fruit margarita. This was accompanied by a tray of snacks proffered by a friendly flight attendant. It was a carefully curated experience (emphasis on “experience”) that ended with a smooth landing in Rifle, Colorado as the flight had to be diverted due to a low-pressure ceiling. As our shuttle bus made its way over the mountain roads to Aspen, I watched tiny snowflakes float aimlessly to the ground, melting just as quickly as they landed.

Arriving at the W Aspen a little over an hour later, I relaxed in my room and admired the industrial-chic decor. From my vantage point on the couch, I had a view of the white-capped mountains, and I watched skiers carve tracks in the snow. The town was buzzing, but it also had a distinct feeling of the calm before the storm. I found out later that the hotel was at 90% capacity that weekend, a statistic that didn’t surprise me. It seemed that even the steady snowfall wouldn’t prevent guests clad in snow gear from enjoying wine on the hotel’s outdoor patio, warming themselves around heat lamps.

Dr. William Haseltine, the chair and president of ACCESS Health International and an internationally recognized expert on the COVID pandemic, emphasizes that private flights are much safer than commercial ones. “It’s a very different experience because with a private flight you don’t have an airport check-in line. In addition, most airports are not designed to keep a six-foot distance. There are also a number of things that can happen when you’re not in a controlled environment.” So all of the transactions that you undergo at airports through commercial flying–at check-in, boarding, customs, and immigration–multiplies potential contact with other people.

“It’s a very different experience because with a private flight you don’t have an airport check-in line. In addition, most airports are not designed to keep a six-foot distance. There are also a number of things that can happen when you’re not in a controlled environment.”

As interest in safer alternatives to commercial air travel becomes more widespread, innovative companies like JSX, which will be celebrating its fifth year in business in April, are ahead of the curve. Billed as “hop-on jet service for all,”  this airline is democratizing private aviation by advertising many of the same features as luxury carriers like Aero (private lounges, contactless check-in, and crowd-free travel) at a much more affordable price point, in some cases as low as $99 each way.

JSX’s Simpli-Fly program, which was introduced last May, is a three-pronged initiative that prioritizes safety, security, and simplicity with their flight experience. This includes a maximum of 30 passengers, AI-based, high definition thermal scanning, and an advanced air circulation system that combines a significantly higher percentage of fresh versus recycled air while allowing each section of the cabin to have its own air induction and removal stream.

When asked about Aero’s air circulation, Subramanian stated that their jets “constantly circulate and refresh the air in-flight, which is a combination of recycled air and outside air that is conditioned and pressurized for your comfort.”

But Dr. Haseltine asserts that the most dangerous aspect of flying, whether private or commercial, is being in a confined space and breathing the same air as everyone else. “Regardless of what the airlines tell you, I do not believe that they have adequate air circulation or ventilation,” he says.

Dr. Haseltine also emphasized that COVID-19 is not the same as COVID-21. “COVID-21 is far more infectious and much more dangerous than COVID-19. It takes a lot less virus to infect you, and it can make you much sicker, and you have an increased probability of falling seriously ill and dying,” he says.

If you do have plans to fly in the near future, what are the best ways to protect yourself? Dr. Haseltine recommends an essential supplement to a face mask–a face shield. “A face shield is really important because the virus gets into your eyes,” he says. Another precaution is wearing gloves and changing them as often as you would wash your hands. And if possible, bring your own food and drink on the plane.

As for the rest of my flight experience with Aero? Not what I expected, as they still have a few kinks to iron out. Another journalist and I were dropped off at the wrong spot on our way out of Aspen–at the Aspen/Pitkin County Airport, not where Aero is located. We asked around and no one had heard of Aero, instead suggesting that we walk about ten minutes down to the next place where flights take off.

After lugging my suitcase over a sidewalk so covered with snow that it was difficult to determine where we were supposed to go, we entered the building and quickly discovered that Aero wasn’t located there either–it was the lounge for Atlantic Aviation. An agent attempted to contact Aero to request a ride for us, but they weren’t yet ready to receive passengers. So the agent invited us to hang out there for a while. Finally, someone at Aero said they would send a car, but it never appeared so we finagled our own ride. After checking in, we were invited to wait in a “mobile lounge” which was really just a shuttle bus.

Bottom line: would I feel safer flying with companies like Aero or JSX in the future, over a commercial flight? Now that I’ve had a taste of what it’s like to bypass the crowds and general hassles of being in an airport, undoubtedly yes. The additional health and safety measures that they have implemented are also a consideration. But the things you don’t plan for–in this case, an Aspen airport adventure–are often the most memorable, for better or worse. And that is one of the things I love most about travel.