What You Need To Know Before Booking Your Next Transcontinental Flight

With United having bid goodbye to JFK last October, shifting its hub to Newark as a result, now's as good a time as any to look at the flight options available to consumers when flying coast to coast. Responding to growing demand for non-stop flights between New York City (JFK and EWR) and Los Angeles (LAX) and San Francisco (SFO), the range and quality of service has never been greater onboard the country’s preeminent airlines. In an arms race to offer one-of-a-kind amenities and experiences at high altitudes, these airlines are offering their best on their transcontinental services. 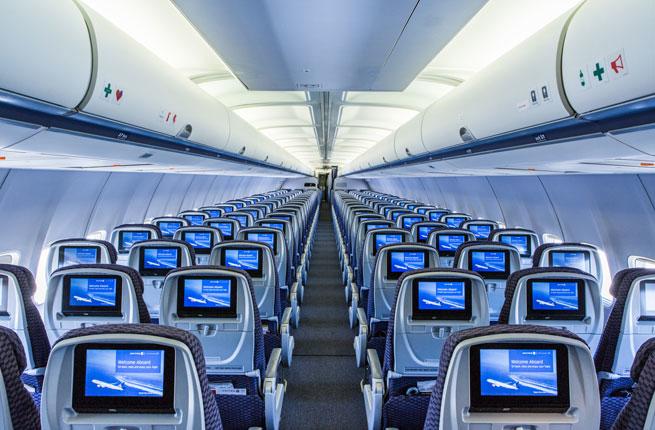 Pouring $2 billion into the revitalization of its Newark hub, United has responded to the surge in demand for transcontinental travel with up to 10,000 daily round-trip seats available between Newark and Los Angeles/San Francisco. United has the most transcontinental flights between JFK, LAX, and SFO of any airline: 17 daily flights each way between Newark and San Francisco, and 15 daily flights each way between LAX and EWR.

Flying a fleet of Boeing 757s (an older fleet, with planes dating back to 1989), United was the first to introduce a domestic transcontinental luxury service with its p.s. (premium service) in 2004. Leading the p.s. program is BusinessFirst’s flat-bed seats that provide 6-feet-4-inches of sleeping space. Complete with a duvet and personal pillow, the flat-bed seat is perfect for uninterrupted sleep on the red-eye haul. Three entrée selections (think lobster mac and cheese) and pre-arrival freshly baked cookies have become the new standard for the fleet as of 2015.

Economy class on p.s. flights offers only a few perks to distinguish the service from the short-haul experience. All planes have been recently updated to feature seatback nine-inch screens and one AC power outlet and USB port for every three seats. Entertainment options on the screens feature DirecTV for $7.99 with WiFi onboard provided by Gogo, starting at $4.95. 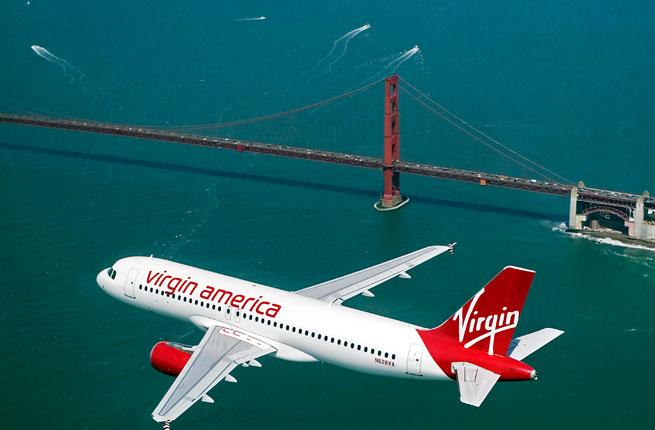 Virgin America, one of the newest airlines offering transcontinental service, has been operating since 2007. With an expanding fleet of A320s, Virgin America currently flies six return flights daily from JFK to LAX and SFO. An airline that prides itself on its in-flight experience, Virgin America sets the atmosphere in the cabin with its club-like mood lighting. The first airline to offer fleet-wide WiFi in 2009, Virgin America continues to innovate on modern luxuries of travel, offering its custom Red seatback free entertainment system with live TV (24 channels for free), new movies on demand (for purchase), and a first-of-its-kind messaging system, allowing guests to interact and play games. Don’t bother reaching up to page a flight attendant when hunger strikes, since Virgin America offers an on-demand food and drink ordering system.

In the first-class cabins of transcontinental flights, there are eight seats that don’t fully recline, trailing the competition’s lie-flat seats. And while you won’t be able to lie flat on your journey, you’ll want to sit up for the Netflix streaming capabilities on the new high-speed satellite, clocking in up to ten times faster than current competitors. Best of all, the service is free through March 2016. 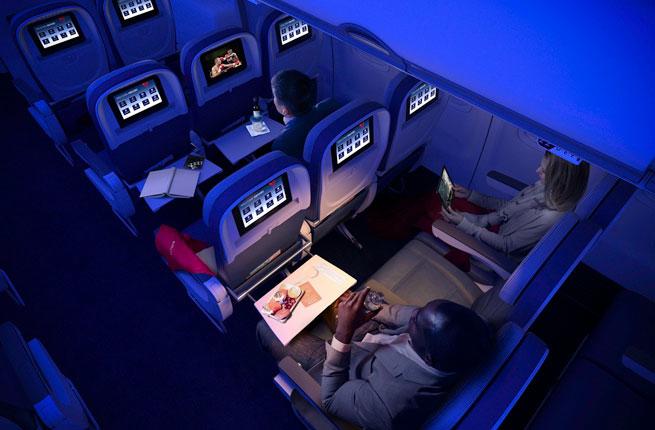 Delta flies a range of 767s (the only carrier to regularly fly a wide-body plane on transcontinental routes) and 757s on its transcontinental routes (up to ten flights a day from JFK to LAX and up to eight daily flights from JFK to SFO). Delta One, which began in March 2015, encompasses the premium first-class experience onboard its transcontinental service between JFK and LAX or SFO. Adding to the Delta One experience at LAX, Terminal 5 underwent a $229 million facelift introducing the company’s first-ever first-class check-in lounge with a dedicated curbside entrance, a club lounge, and exclusive access to airport security. Expect fine dining on board as a Delta One passenger, as celebrity chef Michael Chiarello’s menus include short ribs and pork tenderloin with dessert options that range from a cheese plate to salted caramel gelato.

As for the economy experience , there’s been some fun additions to the service by way of streaming. Fringe amenities included with the fare are limited to Delta’s standard snacks (Biscoff cookies, peanuts, and pretzels) and refreshments, while the new Delta Studio brings streaming to your mobile device with a catalog of new movies and TV shows (for an additional fee) and free Delta Studio programming. WiFi is available on all of its transcontinental planes through Gogo, starting at $4.95. 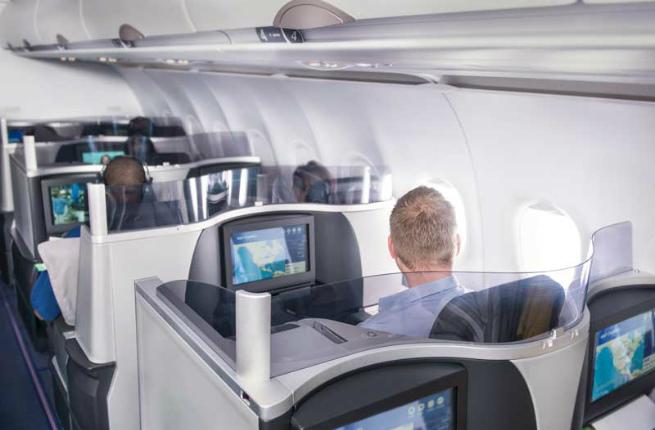 An airline still in its teens, JetBlue offers a fresh take on the standard in-flight experience. JetBlue stepped into the big leagues of the transcontinental race in June 2014 with a new fleet of A321s outfitted with the company’s first premium flight experience, Mint. Luxurious lie-flat seats with an in-seat massage feature and a privacy door are domestic transcontinental firsts, not to mention their length at 6-feet-8-inches, second only to American’s first class. Fine dining comes by way of Saxon and Parole, an NYC hotspot with upwards of six entrées ranging from a burger to crab pot pie. With fares from $599, Mint offers incomparable value for its premium service.

JetBlue offers transcontinental service on six peak-day flights from JFK to SFO and nine daily flights from JFK to LAX, with plans to add additional flights in early 2016. There’s reason for the expansion, as demand for Mint far exceeds their limited supply and JetBlue’s economy service continues to impress. In the A321's main cabin, expect ten-inch video screens on every seatback with 100 free channels of DirecTV, power access in every seat, unlimited snacks, and most excitingly, free, fast Internet access via Fly-Fi. Look for streaming through a new partnership with Amazon Prime on board in the near future. Red-eye flights include the Snooze Kit: eyeshade and earplugs, and hot-towel service prior to arrival. 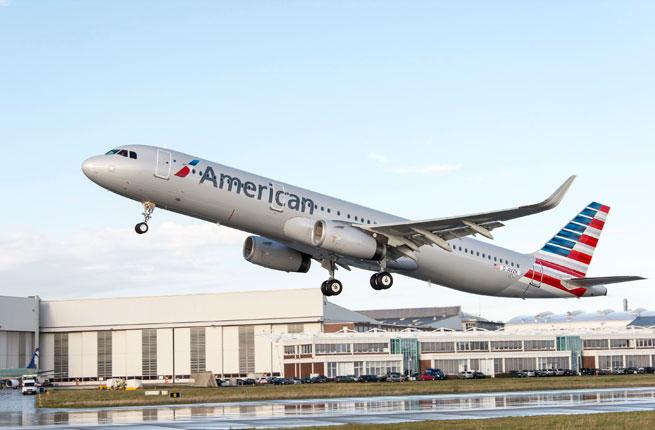 American Airlines was at the forefront of transcontinental travel, dating back to 1953 when a non-stop flight aboard a DC7 from New York to Los Angeles took eight hours. The airline’s new A321Ts, a dedicated fleet of transcontinental planes, now average about five hours, as American Airlines continues its legacy of transcontinental service with up to thirteen flights a day from JFK to LAX and seven flights a day from JFK to SFO. American stands out among the competition as the only airline to fly three separate classes domestically, offering first and business class plus its main cabin.

First and business class aboard the A321Ts feature many of the same amenities, including lie-flat seats, Bose noise-cancelling headphones for use during the flight, and a 15.4-inch screen with up to 250 movies on-demand. The distinction of first class comes with a bit more privacy, access to one of the A321T’s two pet cabins (available for an additional $125), and American’s Flagship Check-In at JFK and LAX, where a concierge is available to help for any of your travel needs and provide expedited access to security.

From the economy seats, the service offers high-end 8.9-inch HD touchscreen monitors with select NBC TV shows (free) and on-demand new movies and TV shows starting at $4.99. Unique to the A321T, look for the Disney entertainment library, where one price grants access to many Disney movie classics, TV shows, and more. WiFi is available from Gogo, starting from $4.95.