Tips & Practicalities Geena Truman I Built My Own Camper Van for Under $3,000. Here's How I Did It

Transportation Chantel Delulio Which Movie Car Is the Best for a Road Trip? (And Which Is the Worst?) 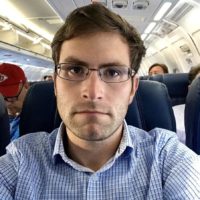 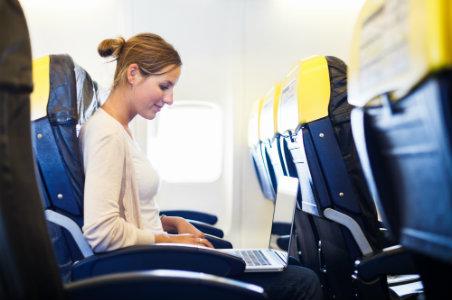 Can you think of the last time you were entirely cut off from the rest of the world for more than a couple of hours? Chances are it was during a flight, on an aircraft that didn't offer onboard WiFi. Being able to surf the web from 30,000 feet is undoubtedly a luxury, but with most U.S. airlines now offering service on domestic and even select international flights, some passengers have begun to expect in-flight internet every time they fly. Read on to see whether or not you'll be able to connect during your next North American flight.

As one of the largest airlines serving the West Coast, Alaska flies more than 160 times each week between cities like Anchorage, Portland, and San Diego, and several destinations in Hawaii. Since you'll spend most of that time traveling over the Pacific Ocean, where there's no Gogo coverage, you won't be able to connect during those flights. You will, however, be able to get online when traveling on a Boeing 737 between the airline's other airports, even on flights between the continental U.S. and Alaska.

For flights within the U.S., many of AA's 737s are equipped with Gogo's ground-to-air WiFi service, as is the airline's Airbus A321 Transcontinental that travels between New York and Los Angeles or San Francisco. If you're flying internationally, you'll only find WiFi on American's latest jumbo, the 777-300ER. Following the merger with US Airways, some of that carrier's planes now service AA flights, so you'll need to pay careful attention when making a booking. Fortunately, the airline's site makes it easy to tell whether or not your plane will be equipped during ticketing—just look out for the blue WiFi insignia in the expanded flight info.

Like Alaska and American above, Delta partners with Gogo for WiFi on domestic U.S. flights, including those to and from Alaska. All the airline's domestic U.S. aircraft, including regional jets, are equipped, though if you're traveling on an international plane between two U.S. cities, you may not have service. Select Airbus A330s and Boeing 747s and 767s have satellite service installed as well, but you'll need to check the flight booking or status page to see whether or not you'll have WiFi on your next overseas journey.

While Frontier did announce plans to install Gogo's inflight WiFi on select planes a few years back, it doesn't currently offer service on any of its aircraft. You'll have to settle for DirecTV instead, which includes 24 live channels along with several movies and TV shows on each flight.

Given that all of Hawaiian's flights either begin or end in Hawaii, the airline doesn't offer WiFi on any of its aircraft. Ground-to-air service may theoretically be possible for intra-island flights, but since those are less than an hour in duration, it simply doesn't make sense. There is satellite coverage over parts of the Pacific Ocean, however, so it's not unreasonable to expect Hawaiian to add WiFi to long-haul aircraft in the future.

JetBlue was one of the last airlines to add WiFi to its fleet of Airbus planes, but following a long wait for a speedy option, the carrier now offers the fastest WiFi in the sky, powered by ViaSat's Ka-band satellite. The service, called Fly-Fi, is available on select Airbus A320 and A321 planes, and for the time being, it's completely free. Best of all, because each plane is connected to a high-throughput satellite, you can browse at speeds that rival what you'll get on the ground, even if everyone on the plane is connected at the same time.

Unlike the carriers above, Southwest's WiFi is provided by Row 44, which pairs its satellite Internet offering with free live television from Dish. Once connected, customers can stream 19 live channels and up to 75 TV episodes from their own devices, such as Mac and Windows laptops, Android smartphones and tablets, or iPhones and iPods. There are no onboard power outlets, however, so make sure to charge your gadgets completely before your flight.

Until 2013, United only offered Gogo WiFi on its 757s that fly between New York's JFK airport and Los Angeles or San Francisco, the country's busiest business route. Now, however, the airline offers satellite WiFi from Panasonic on all of its A319s, A320s, and 747s. If you're traveling on one of 100 737s, you'll be connected as well, using the same speedy ViaSat satellite service available on JetBlue. Some of United's newest planes include Internet, but not seat-back TVs, so come prepared with your own content if you don't plan to browse.

All of US Airways' flights that travel exclusively within North America come equipped with Gogo WiFi. If you're traveling on a larger plane that's often used for transatlantic flights, however, then you'll most likely be out of luck. The airline recently merged with American Airlines, and some US Air flights may be operated by that carrier instead, so be sure to check whether or not your plane will have WiFi during the booking process.

Virgin's entire fleet, including all Airbus A319s and A320s, comes equipped with Gogo's ground-to-air WiFi. There's always a small chance that Internet won't be available on your flight, due to maintenance and other service issues, but otherwise, you should be good to go.