News Apeksha Bhateja What Are the Chances You'll Get Monkeypox at a Hotel?
NewsA Perfect Day in New York City’s Greenwich Village 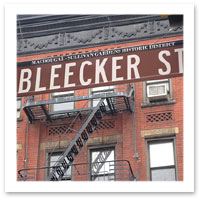 Greenwich Village has a long bohemian history; for years the area was an enclave of counterculture, from beatniks to the antiwar movement to gay rights. Today, this picturesque neighborhood is better known for its celebrity residents and sky-high housing costs. However, there remains much to celebrate and see.

High-rises and office towers have no business among the small curving streets, peculiar alleys, and historic town houses. The area has many specialty restaurants, caf&eacute’s, and boutiques with a warm and charming neighborhood vibe; you may particularly appreciate the change of pace if much of your trip’s activity is centered closer to the chaos of Time Square. Here’s one way to spend a day exploring a neighborhood that is as popular with locals as it is tourists.

Caffe Reggio, located at 119 MacDougal Street, is one of the Village’s first coffeehouses. It opened in 1927 and hasn’t changed much since. Their extremely affordable breakfast menu includes omelettes, poached eggs, pancakes, and other classic New York breakfasts with an Italian touch. This is a great place to begin your day with a taste of what the neighborhood was, is, and hopefully always will be.

Stop by Our Lady of Pompeii

To absorb some of the area’s idealism and spirituality, stop at Our Lady of Pompeii Church at Bleecker and Carmine, where Mother Cabrini, a naturalized Italian immigrant who became the first American saint, often prayed.

Across the street is Father Demo Square, a tiny triangular park with a softly bubbling fountain. Rest your feet here a minute before embarking on a walk through the architecture of the Village.

Asked in the Forums: “How does one “do” Greenwich Village?” 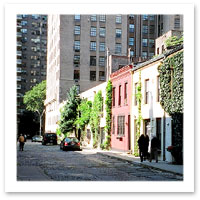 Head north a few blocks to Washington Square Park, where the city’s central business artery, 5th Avenue, ends, and the student-bohemian feel of the Village begins. Circle the open square, but don’t expect to find a bench or fountain-side seat not occupied by New York University students, professors, pigeon-feeders, or idlers of all sorts. On the park’s north side is the grand Washington Memorial Arch, which looks upon the Row, two blocks of lovingly preserved Greek Revival and Federal-style town houses.

Residences are sometimes tucked away in little enclaves in the Village. Washington Mews (directly north of the arch; photo, right) and MacDougal Alley (half a block north on Washington Square W) are two cobblestone private streets just above the park, so head there after taking in the Row. From there head west of 6th Avenue on 10th Street , where a wrought-iron gateway leads to a tiny courtyard called Patchin Place. Around the corner is another alley filled with homes, Milligan Place.

The beautiful blocks of 19th-century redbrick town houses that predominate in the Village are occasionally marked by attempts at nonconformity. At 18 West 11th Street sits a home with a modern, angled bay window, a building erected to replace the town house inadvertently blown up by the antiwar group the Weathermen in 1970. The triangle formed by West 10th Street, 6th Avenue, and Greenwich Avenue originally held a market, a jail, and the magnificent towered courthouse that is now the Jefferson Market Library. Finally, head three blocks west along Christopher street to Christopher Park, site of the Stonewall Riots. 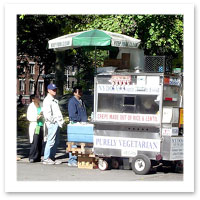 New York City is all about choice. The Village’s charm is that it can serve those on a budget just as easily as those looking for something a little more upscale. Here are some options on both ends of the spectrum.

With NYU in the neighborhood, you know there’s a huge demand for affordable restaurant options.

One legendary spot is Gray’s Papaya, a stand-up takeout dive. And, yes, limos do sometimes stop here too for the legendary hot dogs, which are juicy, traditional, and very cheap. Gray’s is also famous for their fresh-squeezed orange juice, a strangely tasty creamy banana drink, and the much-touted papaya juice. You can find them at 12 E. 12th St, between 5th Ave and University Pl.

Some of New York’s finest and most innovative restaurants are in or near Greenwich Village.

Even the most hard-to-please connoisseurs have a soft spot for Lupa, Joseph Bastianich and Mario Batali’s “downscale” Roman trattoria. Rough-hewn wood, great Italian wines, and simple preparations with top-quality ingredients define the restaurant. Highlights include such dishes as ricotta gnocchi with sweet-sausage ragù, housemade salumi, and sardines with fennel and bulgar. Make a reservation if you can, but the front of the house also takes walk-ins. 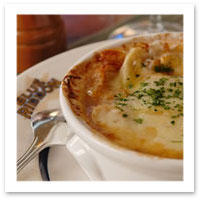 When the owners renovated the space that would become Blue Ribbon Bakery, they uncovered a 100-year-old wood-burning oven. They relined it with volcanic brick and let it dictate the destiny of their restaurant. Blue Ribbon has an eclectic menu featuring substantial sandwiches on homemade bread (from the oven, of course), small plates, a legendary bread pudding, and entrées that span the globe, from hummus to grilled catfish with collard greens and mashed sweet potatoes. The basement dining room is dark and intimate; upstairs is a Parisian-style cafÃ©. It’s a good spot for celeb-spotting as well.

Shopping, Walking, and Down Time

The West Village is a rambling maze of happy surprises. There are so many worthy shopping stops here, it’s best just list the highlights. One thing’s for sure: you’ll probably abandon any semblance of a plan just a few minutes before starting out.

Bleecker Street is a particularly good place to indulge all sorts of shopping appetites. Foodies love the blocks between 6th and 7th avenues for the specialty purveyors like Murray’s Cheese. Fashion foragers prowl the stretch between West 10th Street and 8th Avenue, while avid readers lose themselves in the Biography Bookshop. Hudson Street and Greenwich Avenue are also prime boutique-browsing territory. Christopher Street, true to its connection with the lesbian and gay community, has a handful of rainbow-flag stops. High rents mean there are fewer student-oriented shops around NYU than you might expect.

Walking and Down Time

If you’d rather not spend your time in the shops, consider meandering throughout the various streets of the West Village. You’re sure to find something that interests you. Alternatively, you could park yourself at Joe the Art of Coffee and read the paper or a book, or even take in a movie at Film Forum, the classic art house movie theatre.

Another worthwhile option: return to your hotel for a nap. This is supposed to be relaxing! 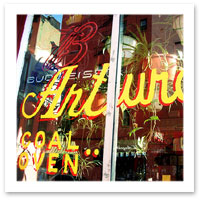 Still haven’t had a chance to try NYC’s famous pizza? One budgetary favorite is Joe’s Pizza, a no-nonsense spot to get it by the slice near the West 4th subway stop at 7 Carmine Street and 6th Avenue. It’s simple, quick, and high-quality. Have company? Further south down 6th Avenue and just around the corner at Houston and Thompson St. you can settle into a table at Arturo’s. There’s a full menu of Italian classics, but don’t be fooled: pizza is the main event.

There’s typically a crowd waiting outside for one of the copper-topped tables at Moustache, an appealing Middle Eastern neighborhood restaurant. The focal point is the perfect pita that accompanies tasty salads like lemony chickpea and spinach, and hearty lentil and bulgur. Also delicious is lahambajin, spicy ground lamb on a crispy flat crust. 90 Bedford St., between Barrow and Grove Sts.

Tasteful, sophisticated Blue Hill, a chocolate-brown den of a restaurant—formerly a speakeasy—on a quiet, quaint side street, maintains an impeccable reputation for excellence and consistency under the leadership of Dan Barber. Part of the “slow food,” sustainable agriculture movement, Blue Hill mostly uses ingredients grown or raised within 200 miles, including the Four Season Farm at Stone Barns Center for Food and Agriculture, Barber’s second culinary project, in nearby Westchester County.

Wallsé, in the far northwestern corner of Greenwich Village, is another solid choice for a special dinner. The modern Austrian menu at this neighborhood restaurant with a quasi-Wiener Werkstätte look is soulful and satisfying, with a strong emphasis on Austrian tradition and urban New York attitude. Desserts do Vienna proud.

Asked in the Forums: “Any recommendations for Italian, French, or American neighborhood casual restaurants in the Village?”

An Evening of Jazz

There’s no better way to close out your night than at the Village Vanguard. This prototypical jazz club, tucked into a cellar on 7th Ave, has been the haunt of legends like Thelonious Monk. Today you might hear jams from the likes of Bill Charlap and Ravi Coltrane, among other jazz personalities. Go on a Monday night for a performance by the resident Vanguard Jazz Orchestra.

Asked in the Forums: “Can you recommend a great place to have a drink/appetizers in the West Village for two 45-50 year old females?” 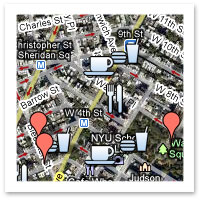 View our recommendations on a map