A Literary Tour of Madrid

Even if you’re not the most observant tourist, it’s hard not to take notice of all of the literary history that abounds in Madrid. A quick stroll around the city center showcases plaques, statues, and even quotations engraved into sidewalks, all in dedication to the famous writers that have lived and worked in the Spanish capital. Here are five essential stops on any literary tour of Madrid. 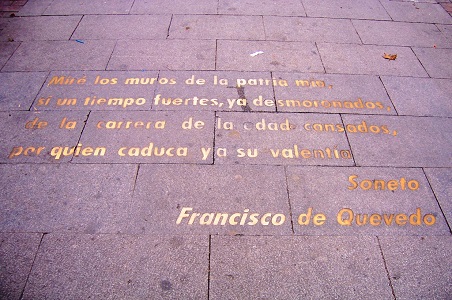 Calle Huertas marks the main artery of the Barrio de Letras district, literally translated to the “neighborhood of letters,” owed to the number of Spanish writers that have historically lived in the quarter. Quotations from Spanish literary legends like Miguel de Cervantes, Luis de Góngora, Francisco de Quevedo, and Gustavo Adolfo Bécquer are inscribed in the middle of the street, serving to remind passersby of the city’s rich literary history. The street transforms from a relaxing historical gem during the day, to the center of Madrid nightlife come nightfall, lined with hip bars, restaurants, and jazz clubs.

Madrid was one of the many locales that inspired Ernest Hemingway. A frequent visitor during the 1920s, ’30s, and ’50s, Hemingway ate and drank his way through the city, often citing his favorite haunts in his literary works. Restaurante Sobrino de Botín—certified by Guinness World Records as the oldest restaurant in the world, and mentioned in the final pages of The Sun Also Rises—was one of Hemingway’s favorites, where he was known to take a table on the second floor to dine on cochinillo, a traditional dish of roast suckling pig. 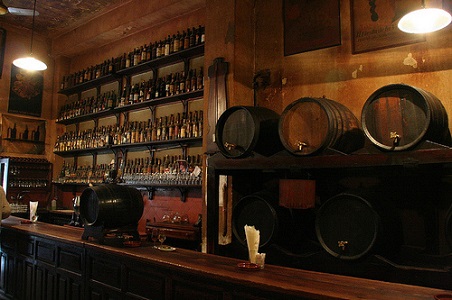 This traditional sherry bar was another Hemingway haunt, when he was a war correspondent during the Second World War. And during the Spanish Civil War in the 1930s, La Venencia was a hangout for socialist Republican soldiers and sympathizers. Visiting the bar offers an authentic glimpse of Madrid’s storied past, just don’t expect to order up a simple beer: The menu is strictly sherry, though you can snap up tapas like olives, Manchego, and chorizo.

Continuing along Hemingway’s former stomping grounds, Las Cuevas de Sésamo is a cave-like bar that opened in 1950 and is known for its highly potent sangria. For the past 60-plus years, the establishment has been a haven for the bohemian and artistic community for nights of drinking and singing, along with live piano music. Completely unassuming from the outside, the interior opens up into an intimate cavern with walls covered in contemporary paintings (some in frames, some actually painted on the walls) and quotations from artists and literary figures like Miguel de Cervantes, Garcia Lorca, and Beethoven. As Hemingway was one of the bar’s first patrons, an autographed plaque hangs on the wall in his memory.

Of course, no literary circuit in Madrid would be complete without acknowledging the author of the most famous novel to come out of Spain, and still one of the most widely read books in the world. Miguel de Cervantes, author of Don Quixote de la Mancha, lived and died in his home in Madrid, located just off of the street bearing his name. Although visitors cannot enter the private Casa de Cervantes, there is a plaque commemorating his life and death, as well as quotes outlined on the exterior. For a full pilgrimage outlining the life of Cervantes, hop a train to Alcalá de Henares, a historic town located less than an hour outside of Madrid that’s home to the Cervantes Birthplace Museum.

Madrid-based freelance writer Shayla Martin covers cuisine, culture, hotels, spas, and destinations. She is the founder of YourLandMyLand, a travel and lifestyle blog that inspires beyond the tourist zone solo travel experiences. Follow her on Twitter and Instagram @Yourlandmyland