In a state that dazzles with such glitzy cities as Naples and Miami Beach, Jacksonville—or JAX, as locals lovingly call it—has remained a quiet, under-the-radar treasure beloved by those in the know. That is, until now. A highly touted food scene, buzzing neighborhoods, world-class architecture, hopping art and design galleries, and some of the best waves around are earning it the moniker the “next San Francisco or Portland.” The time to go is now. Here are nine reasons why. 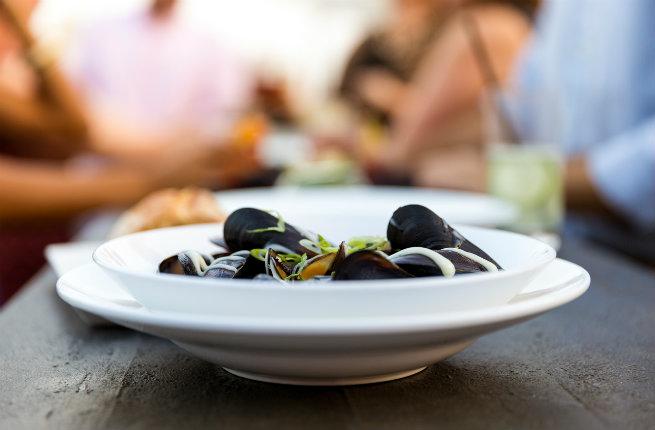 Everywhere you look, new and exciting things are happening in the JAX eating scene. Inspired by the bounty of fresh ingredients culled from its coastline, St. Johns River, and fertile farmland, restaurants are taking Southern cuisine to a new level. Chef/owner Tom Gray’s Moxie Kitchen + Cocktails, for example, has adopted a “full-circle” philosophy to its regional cuisine (vs. farm to table), meaning everything in the industrial-chic restaurant, including the hardwood paneling and glass chandeliers, is sourced locally. And the sleek Black Sheep is getting a reputation for such innovative toggles on the classics as fried green tomato BLT and Black Hog Farm chicken and dumplings (sliced chicken served over gnocchi). But the most intriguing of all is taking place at Unity Plaza Park (see No. 2).

Insider Tip: JAX is also making a name for itself in craft brews. Sample them on the JAX Ale Trail.

FREE YOGA & MORE IN THE PARKS 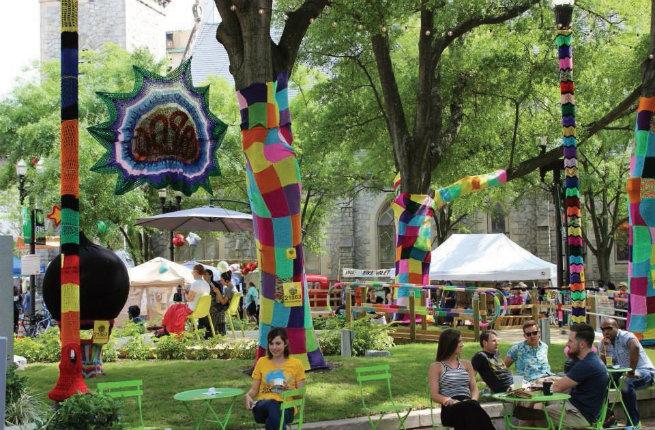 Walking through downtown’s Hemming Park, you’ll spot signs advertising all kinds of free happenings: yoga, art walks, night markets, a chess meetup, and a summer movie series, to name a few. This is a city that loves its outdoorsy activities—and you won’t find a shortage, considering it boasts the nation’s largest urban park system (two national, seven state, and 400-plus city parks). You can bring Fido to Confederate Park; go paddleboarding at Kathryn Abbey Hanna Park; take a sunset water taxi across the St. Johns River to Treaty Oak at Jesse Ball duPont Park; camp on the sand at Huguenot Memorial Park; and go biking on the Jacksonville-Baldwin Rail-Trail through pinewoods, wetlands, and hardwood uplands (keep an eye out for songbirds and wild turkey).

But the most forward thinking is Unity Plaza Park in the Brooklyn neighborhood. Centered around an amphitheater with residential apartments above, Unity Plaza is anchored by three restaurants—and not just any restaurants, but Top Chef winner Kevin Sbraga’s Sbraga & Company and chef Roger Regulacion’s Hobnob, along with the wood-fired pizzeria Brixx. The concept is to create community interaction, a flow between one place and the other. The amphitheater offers activities and events 365 days a year, including concerts, a lively daily broadcast, art shows, and yoga. A big band shell for concerts and a beer garden are in the works (along with one more restaurant). You can spend a whole day here, dining, imbibing, and hanging out.

Insider Tip: A hidden gem that even locals are surprised to learn about is the Jacksonville Arboretum and Gardens, a tranquil oasis in the heart of the bustling Arlington neighborhood. Hiking trails wind through 13 different ecological habitats. 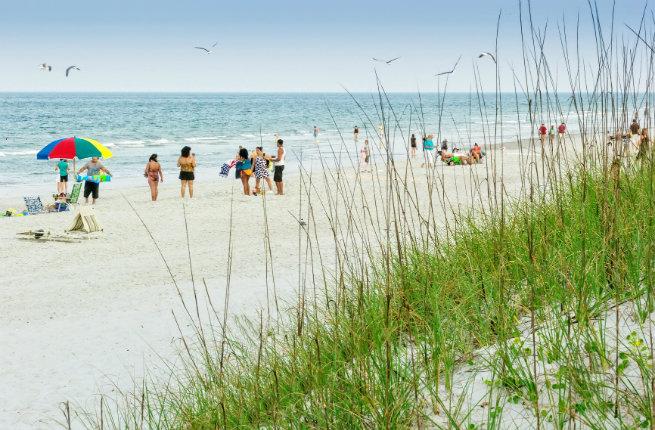 Twenty-two miles of sugary white sand and turquoise surf hug Jacksonville’s easternmost edge, where long days of lounging beneath colorful umbrellas are sublime. There are three distinct beach communities with very different personalities. Atlantic Beach is a vintage beach town, very casual and surfer-dude relaxed, with trendy shops and restaurants at its Town Center. Just south is Neptune Beach, popular among families. And the southernmost section is trendy Jacksonville Beach, with its fishing pier and summer moonlight movie series.

All that said, amped surfers know some of the state’s best waves occur right here as well, challenging grommets and Gandalfs alike. Join (or watch) them near Mayport Naval Station, where jetties create the best break on the state’s northeast coast, or “The Poles” in Kathryn Abbey Hanna Park. Hot-doggers flock here in May during the WaveMasters Surf Festival, Florida’s most prestigious open amateur surfing competition, with the Florida Surfing Association Super Grom Surf Festival following in June.

Insider Tip: The Beaches Trolley is a great local transport system that will take you all along the beaches for $1.50 per trip; day passes are also available. 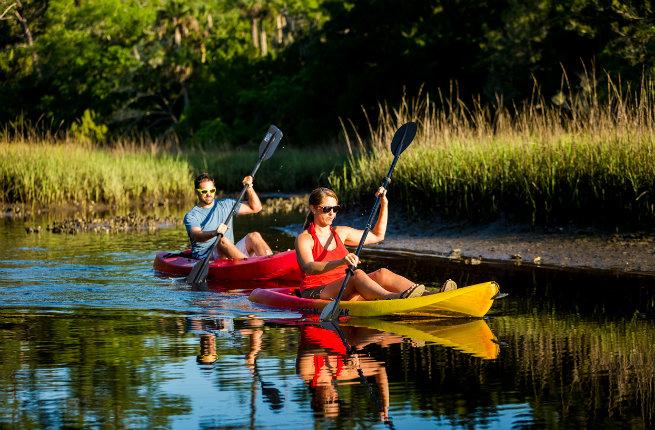 With more than 1,100 miles of navigable waterways, Jacksonville boasts more shoreline than any other city in the United States, and one of the best ways to explore is by kayak. Put in at St. Johns Marina boat ramp next to River City Brewing Company and before you know it, you’ll be paddling past downtown’s glittering skyline. Get a more natural backdrop at Timucuan Ecological & Historic Preserve, where water trails flow through a magical land of salt marshes, coastal dunes, and hardwood hammocks (Kayak Amelia offers guided kayak tours through this fertile realm). But the beauty of it all: wherever you go, you have a fair chance of spotting dolphins—and, if you’re really lucky, shy manatees.

Insider Tip: Manatee sightings are not guaranteed . . . but you never know! These lumbering giants like warm, shallow, slow-moving water. The best time to see them is between mid-December and mid-April. 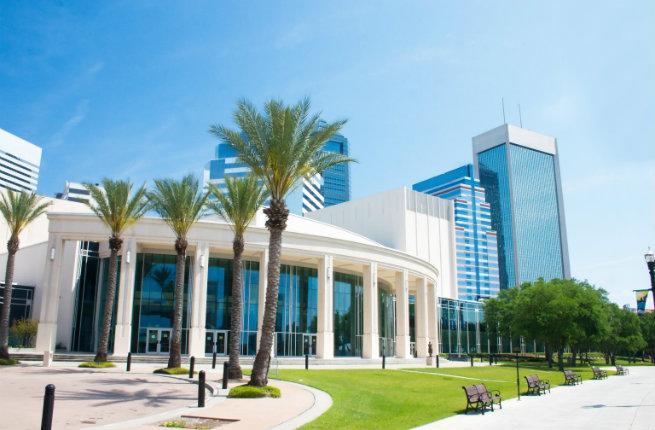 When Spanish moss caught fire at a furniture factory in 1901, a devastating inferno swept through downtown, leaving behind a literal clean slate that lured architectural greats to help rebuild. The greatest of all was Henry John Klutho, a friend of architect Frank Lloyd Wright, who is credited with designing dozens of buildings in the Prairie School style—giving Jacksonville one of the largest collections outside the Midwest. Sprinkled among these beauties are buildings designed in other notable styles, including Classical Revival, Chicago School, and Gothic Revival styles. Among the highlights: the ten-story 121 Atlantic Place (formerly Atlantic National Park) from 1909, Jacksonville’s first skyscraper; the 1908 Bisbee Building, the first reinforced concrete high-rise anywhere in the southern United States; and the Classical Revival Carnegie Library from 1905.

Insider Tip: Take the popular “Top to Bottom” tour to gain a true appreciation of the city’s architecture, including secret underground tunnels and enormous treasure vaults. 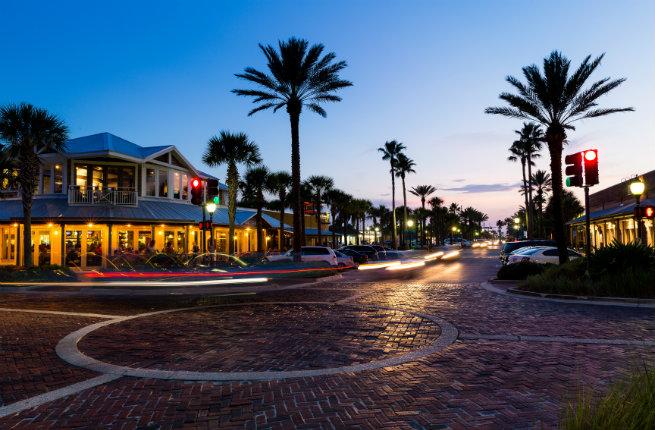 The city, which happens to be the largest city in the continental U.S. (by land mass—only 850,000 people live there), is composed of a bunch of little neighborhoods, each one with its own feel. So if you’re feeling urbane, you can head downtown, with its glass skyscrapers, seven majestic bridges along the St. Johns River, world-class museums, and innovative restaurants. Then there’s historic, oak-shaded Riverside Avondale, noted for its charming architecture and the Riverside Arts Market, held every Saturday under Fuller Warren Bridge. San Marco is a pedestrian-friendly enclave with gas lamps and scrolled iron benches sprinkled among its buzzing restaurants (Bistro AIX, Taverna, and Maple Street Biscuit Company are local institutions); escape the afternoon heat with a movie matinee at the famous Art Deco San Marco Theatre. And then there are the beach communities, foremost among them Beaches Town Center in the heart of Neptune and Atlantic Beaches; just steps from the surf, enjoy healthy restaurants, art galleries, yoga retreats, and beach shops along its brick-lined, flower-filled streets.

Insider Tip: The automated Skyway Express connects several different neighborhoods as it glides silently above city streets and across the St. Johns River between downtown and San Marcos—for free!

Sweet Pete’s is a kid’s dream come true, with bold colored rooms filled floor to ceiling with every kind of sweet imaginable—more than a thousand different kinds. You can have parties and catered events here, take an interactive candy-making or sweet science class, and watch craftspeople make fudge. And, as you may have guessed (or hoped), Sweet Pete’s isn’t only for kids. Adults can enjoy the dessert bar, rooftop patio, or adult-style cocktails at the Candy Apple Café + Cocktails.

Insider Tip: Go all in with the interactive Candy + Cocktail Demo, which includes the chef’s choice of four appetizers, a signature cocktail, and first-hand experience in making the candy du jour.

Few people know that Jacksonville is older than nearby St. Augustine, which gets all the credit for being the earliest settlement in the United States, dating from 1565. The French Huguenots established a village and Fort Caroline in 1564 somewhere along the St. Johns River’s south bank. The Spanish, in the middle of their treasure hunting throughout the Americas, did not appreciate the French presence. As such, a Spanish army was sent to slaughter them, destroying their fort and establishing their own settlement nearby (thereby making theirs the oldest continuous settlement in America). Never again did the French have a strong claim in North America. It’s not exactly certain where that original French settlement was, but a replica fort and small museum have been constructed at the Fort Caroline National Memorial to revisit those days.

Insider Tip: Be sure to check out the copies of Jean Ribault’s engraved illustrations at the museum, which provides a fascinating insight into Native American and colonial life—collecting gold, preparing for a feast, hunting deer.

JAX is home to eight professional sports teams, including the Jacksonville Jaguars NFL football team. But the most fun to be had at any sports event is probably a sunny afternoon baseball game with the Jacksonville Suns, the Class AA affiliate of the Miami Marlins. Indeed, the sport has been played continuously in this baseball-loving town since 1904 (except 1969). Designed with an old-timey brick facade, their ballpark extols the age-old tradition of baseball, though the concessions are anything but old-fashioned: You’ll find jambalaya, pulled pork, and waffle cone chicken amid the hot dogs and popcorn. And the best part? General admission is as low as $5 per ticket.

Insider Tip: For a different take on sports, attend a home match of the Jacksonville RollerGirls at Skate Station Mandarin.