News Apeksha Bhateja A Volcano Eruption Taught Me Something Unexpected About Travel
Home  >  News   >   5 Reasons to Go to Cappadocia, Turkey

5 Reasons to Go to Cappadocia, Turkey

With its mix of naturally formed rounded and jagged rock, hill, valley, and chimney formations in hues ranging from clays to pinks, Cappadocia looks like it could only exist in a fairy tale.

The heart of Turkey’s Anatolia region, Cappadocia encompasses hamlets in the NevÅŸehir Province including Göreme, Urgüp, and Selime. Despite its relative small size, the region is one of Turkey’s tourism capitals. History buffs are drawn here for its storied past—it is relevant to the origins of Christianity—and outdoorsy types for its extensive network of trails and activities offered. Beyond that, though, many come just to see the seemingly unbelievable place with their own eyes, whether from the ground or more than a thousand feet in the air. Here are five reasons for you to go…

Go for the Ride of Your Life 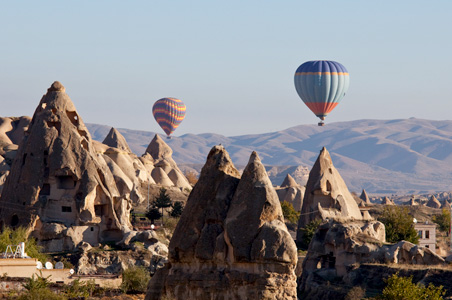 The best way to see Cappadocia and its surrealistic landscape is without a doubt from way up in the air. Every morning before sunrise, hundreds of hot air balloons are fired up across Cappadocia, each taking off with about a dozen passengers for an hour or so of dawn-time hot air balloon travel, floating above and around the rock formations. In fact, Cappadocia is one of the world’s most popular destinations for hot air balloon riding.

Passengers have their choice of companies, but the companies that charge on the higher end tend to employ the more experienced pilots, or pack fewer riders into the basket. Kapadokya Balloons and Urgup Balloons are two of many well-regarded companies. 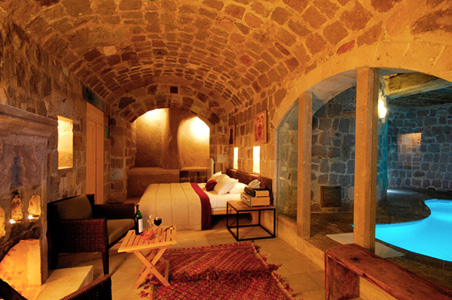 At times the surroundings in Cappadocia are evocative of a fairy tale, other times a lunar landscape, and then, when peering up the caves, the Flintstones. Proprietors in Cappadocia have made the most of the area’s natural resources, updating carved-out cave dwellings from caveman to contemporary. And these cave dwellings get outfitted with all the top amenities from high-end to hostel, so visitors on all budgets can access an earthy abode.

Opened a few years back, Argos in Cappadocia is one of the most choice cave-rendered properties in the area, which even earned a spot on the 2011 Fodor’s 100 Hotel Awards. 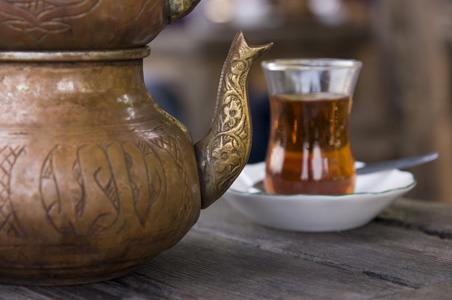 Breakfast is the most important meal of the day, and every day in Cappadocia starts with a spread. Traditional Turkish breakfast consists of cheeses, breads, olives, tomatoes, cucumbers, eggs, jam, and honey, all fresh. Turkish tea also is consumed with breakfast and throughout the day. It is a strong, black tea served in an hourglass-shaped glass—no milk, but honey and sugar often are added, and drinkers dilute the tea with hot water.

One of the most beloved foods in Turkey is kebab, which is the name for skewered meat, or sometimes more generally used to refer to flame-cooked meat. A variety of kebabs exist, and the specialty in Cappadocia is the testi kebab. Testi kebab is a stew of meat and vegetables baked in a fire and served in a clay pot, with bread or foil covering the opening.

The region also is one of Turkey’s wine capitals, with vineyards nestled into the region’s many valleys. The practice of winemaking here dates back thousands of years and the area’s indigenous grapes are Kalecik Karasi, Bogazkere, and Öküzgözü (red) and Emir and Narince (white). Visit the winery Kocabag or schedule a multi-stop tour with Vinotolia. 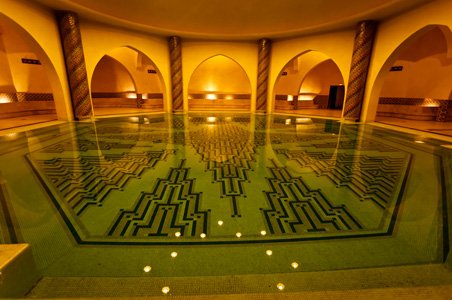 Cappadocia’s tranquil landscape, unhurried pace, and temperate weather make it the ideal backdrop for unplugging. People spend hours lounging on outdoor terraces or in the caves, especially when the day starts with a balloon ride in the wee hours of the morning.

For pampering and relaxation in true Turkish fashion, schedule a trip to the hammam, or Turkish bath. Turkish baths are a historic tradition and central element of Turkish culture. At a hammam, it’s all about the business of cleansing and relaxing. Men and women have separate facilities and are tended to by people of their same sex. Bath packages often include a mud mask, access to the sauna, pools, showers, and a quiet room, and an attentive scrub-down cleansings and massage.

Hammams aren’t just for tourists—locals frequent them, too—so feel free to ask around to see which places people prefer. Elis Hamam in Göreme is centrally located and reputable.

Get the Blood Pumping 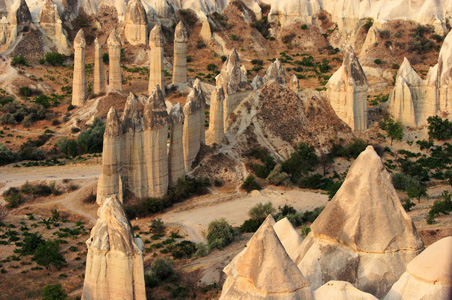 “Cappadocia,” or “Kapadokya” in Turkish, actually means “land of the beautiful horses.” You can catch a glimpse of long-mane horses galloping or grazing on the countryside, and horseback riding is one of the many outdoors activities—there’s also bird watching, for example—for exploring the countryside.

Many people choose to strike out in Cappadocia on their own, picking a hiking trail and following it up and around the towns. Each town also has its own caves open for visitors to hike up, into, and around. The Goreme Open Air Museum is one of the region’s top attractions and includes a system of more than 30 churches and chapels, many of which include frescoes, still intact, dating back through the 9th to 11th centuries. Another popular—and also religion-linked—excursion is to Cappadocia’s underground cities, constructed and utilized by Christians escaped persecution in Roman times.

For those looking to stay aboveground and outdoors, it is easy to pick and follow a trail for a couple hours to a full day of hiking in Cappadocia. The trails in Love Valley, which runs along a sheath of exposed pinkish rock, are a favorite. (Fun fact: The name “Love Valley” is said to allude to the phallic-looking rocks prevalent in the area.)