Coronavirus Leila Najafi Want to Stay in Costa Rica for Over a Year? A New Law Might Help You
Home  >  News   >   12 Must-Try Street Foods Around the World

12 Must-Try Street Foods Around the World 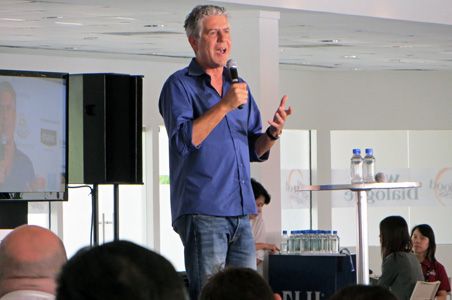 "Street food, I believe, is the salvation of the human race."

Held in the Southeast Asian street food Mecca, the WSFC featured extensive panels and discussions about international street food culture, from the USA’s food trucks to Singapore’s own prolific "hawker" centers, and a 10-day "Jamboree" of 37 street food vendors from around the world serving up their respective regional specialties.

"Street food makes travel interesting," Bourdain explained. "It’s very easy to travel around the world and look out the window and not know where you are. You see the same businesses. Go to the best restaurant in town in Houston, New York, or Berlin, and they’re not going to be that different. That’s not the case with street food. In Mexico, you’ll know if you’re in Puebla or Mexico City—you’ll smell, see, and taste the difference."

Indeed, here are a dozen must-try street foods that offer us a truly unique, local flavor. 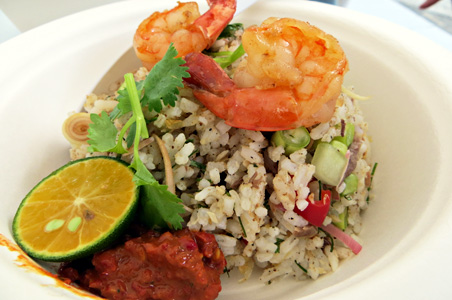 Where To Get It: Malacca’s Big Nonya (33 Jalan Merdeka, Taman Melaka Raya). 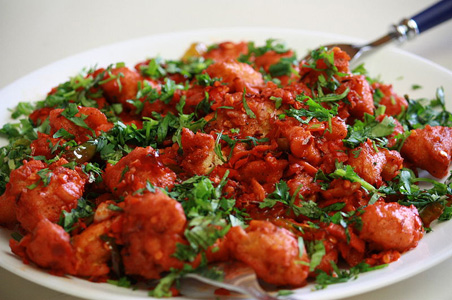 Nobody’s really saying where the "65" comes from—possibilities include the number of spices used, how many days the chicken has been alive, its place on the original menu, etc—but all are in agreement that this spicy, deep fried, red-colored chicken dish, served with minty raita, is frickin’ bucket list-worthy.

Where to Get it: It started at Chennai’s Buhari Hotel Restaurant chain, but you’ll find this treat all over India. 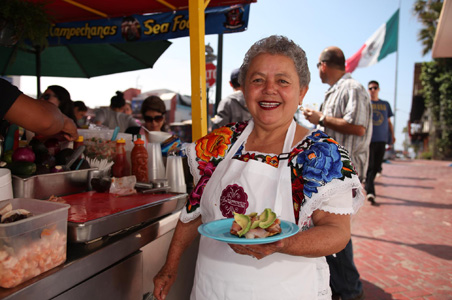 This is quite possibly the highest-profile item at the WSFC Jamboree. It is a gorgeous union of fresh squid, scallop, and crab with crackly, thin tostada bread is complemented by citrusy salsa and avocado.

Where to Get it: At the coastal city of Ensenada’s La Guerrerense. Anthony Bourdain goes cuckoo for jovial chef Sabina Bandera Gonzalez’s take on the dish—it’s the salvation of the human race, after all! 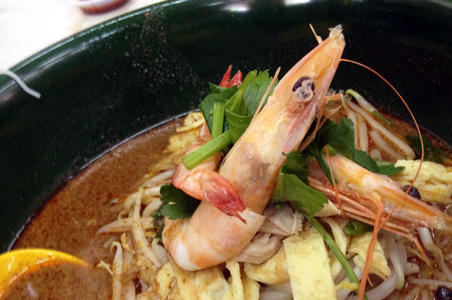 The noodle soup known as laksa is, to Malaysia, what barbecue is to the USA: many states have their own distinctive version. Sarawak, located on Borneo, is home to a perfectly sour-savory-creamy variation—a tamarind-infused coconut milk base with vermicelli noodles, plump shrimp, crisp bean sprouts, shredded chicken and omelet, cilantro, and a tangy citrus spritz from Southeast Asia’s cherry-sized, orange-hued Calamansi limes.

Where to Get it: In Sarawak’s capital city of Kuching, the open-faced Green Hill Corner coffee shop/restaurant. In Singapore, you can experience it at the Bedok Hakwer Center’s Red Hornbill stall (205 Bedok North St. 1). 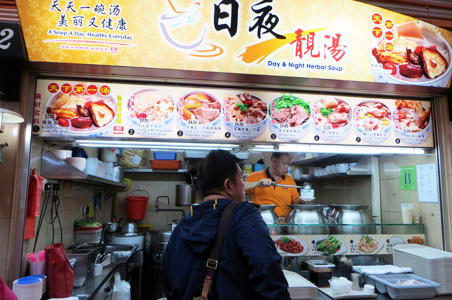 Chicken Rice is the hamburger of Singapore, a ubiquitous comfort food traditionally comprised of broth and ginger-infused rice, steamed white meat (or, in some venues, roasted and brown-skinned), and a side of cucumber slices and garlic chili sauce. It’s served at hundreds of open-air hawker stalls, air conditioned food courts and restaurants, and rarely will you find two Singaporeans that agree on where to find the best. 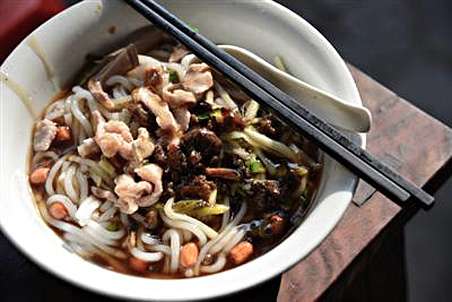 A Hainanese specialty, the Chinese name which means "hugging a beauty," is both sweet and savory. Soft, translucent rice noodles are tossed in a beef and corn gravy and topped with sliced, lean pork, beef jerky, and roasted peanuts.

Where to Get it: In the Hainan region’s coastal Sanya town, at Qiong Yuan. 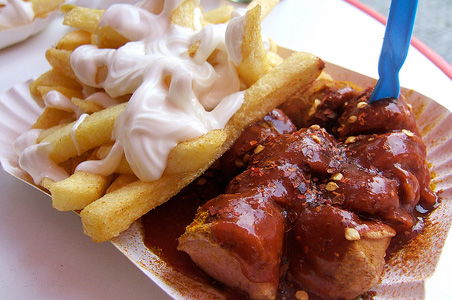 Second only to the doner kebab in its Berlin omnipresence, this is a chopped-up pork sausage doused liberally in a ketchup-curry sauce and dusted with curry powder. Go whole-hog, so to speak, with a side order of fries and mayonnaise. Just don’t eat while in motion, it’s a guaranteed stain. (Trust us.)

Where to Get it: Kreuzberg’s Curry 36 stand, which is open until 4 am from Monday-Saturday. Perfect for post-bar hunger pangs.

Corn in a Cup: Malaysia 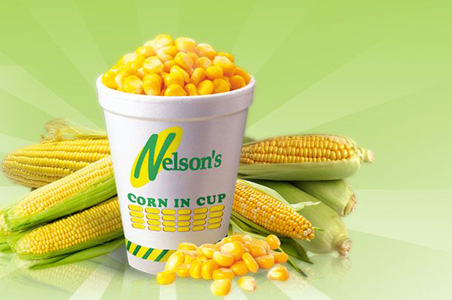 Exactly what it sounds like. Corn niblets in an eight-ounce styrofoam cup, this is delicious, buttery, fresh-tasting, crisp, and sweet. You may mock the name at first, but you’ll soon be eating your words…and more of this corn.

Where to Get it: Nelson’s, a chain with locations throughout Kuala Lumpur including KL International Airport’s arrival hall. Try one of their icy corn smoothies while you’re at it! 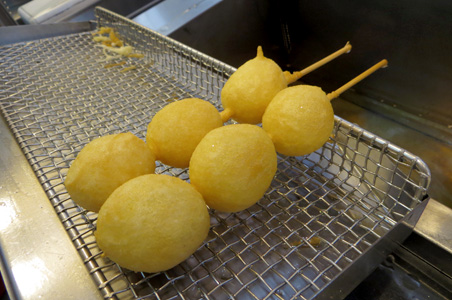 Proving yet again that if you can deep-fry something, it’s going to taste awesome, this simple yet ingenious creation entails a skewer of three condensed milk cubes dipped in batter and fried. The resulting crispy-chewy interior contains a melty, sweet center.

Where to Get it: On the lower level of Shilin Night Market’s food court at the tiny "Frying Milk" stand—look for the cartoon cow on its front. 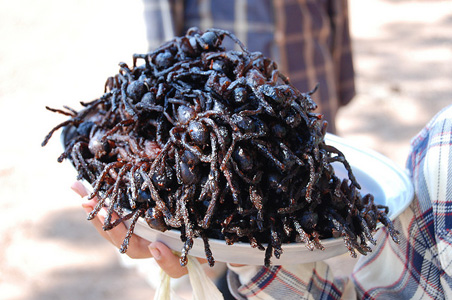 Cambodians learned to eat some funky things during the horrible Pol Pot Khmer Rouge era, including plenty of insects. Compared by some to soft-shelled crabs, except "more gooey," fried tarantulas are a favorite in the market town of Skuon. Admittedly, this pick’s more about earning street cred and Facebook comments than flavor. But we say, go for it!

Where to Get It: Street vendors all over Skuon—typically a rest stop if taking a bus from Phnom Penh to Siem Reap—but if you want a sit-down restaurant tarantula experience, visit Phnom Penh’s Romdeng, part of the Friends International/Mith Samlanh NGO and run by former street kids. 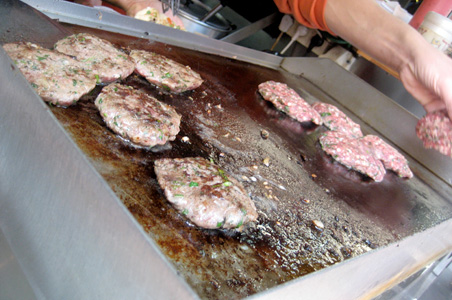 Tel Aviv’s Carmel Market features some of the most photogenic produce you’ll ever see—bright red pomegranates, plump dates—plus delicious prepared food. One you’ll want to go back for is a kebab burger sandwich: flavorful small patties of ground lamb, beef, and mint stuffed into a chewy pita bread pocket with a slather of tahini sauce, parsley, and dash of cilantro.

Where to Get It: A maroon-colored stand dubbed Shmulik’s Kebab (21 Carmel Street). 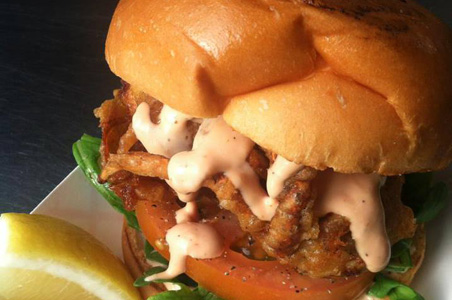 Portland’s "food pod" scene is the mothership of still-spreading food truck culture, with hundreds of amazing port-a-kitchens serving everything from Chinese dumplings to salmon chowder. An "Americanized spin on European street food," the EuroTrash cart is beloved for its fried Spanish anchovies (aka Fishy Chips), fresh potato chips with chorizo, cilantro, and curry aioli, and their signature Soft Shell Crab Burger, an addictive tempura-battered creation on a toasted bun with a dollop of spicy mayo-yogurt.

Where to Get it: EuroTrash at Downtown’s SW 10th & Washington or the Good Food Here pod on SE 43rd & Belmont.